Let’s say you’re about to go into battle with your rebel army. Maybe it’s against opposing battalions of virtual-reality jockeys, ones who have been hired by an evil corporate overlord bent on taking control of the world’s most popular collective V.R. hot spot. Maybe it isn’t. The details aren’t important. What’s important is that Spawn – the comic-book antihero created by Todd McFarlane – is there. So is the Joker; he’s charging right next to him, in fact. Behind them are the Halo troops. And the Iron Giant. And a slasher-movie killer. And some folks speeding by in the souped-up DeLorean from Back to the Future. And oh shit, there’s Mechagodzilla, blowing crazy blue laser-fire! He’s about to take on … well, never mind who it is, trust us, you know and probably love this character. In fact, if you’ve ever owned a PlayStation or an Xbox, or would ride-or-die for specific superheroes, or watch a lot of anime, or view and re-view your favorite blockbusters, you will undoubtedly see your favorites duking it out. Welcome to an intellectual-property battle royale.

This was part of the thrill of reading Ernest Cline’s beloved 2011 novel Ready Player One, which imagined a dystopia that could be bested if you knew the right Eighties trivia, had played the right video games, could quote reams of dialogue from the right cult films and John Hughes comedies. It was part hero’s-journey narrative and part mash note for major nerdom. A movie adaptation was a given, licensing issues for all of its name-dropped detritus be damned. When it was announced that Steven Spielberg was going to be the one to do it, however – the meta aspects went into overdrive. The book overflows with love for the man’s body of work. The feeling was mutual. And should you doubt that the obsession over this filmmaker is on par with the geek love for gaming icons, caped crusaders et al., the high-decibel roar that greeted the man as he walked onstage to introduce the movie’s world premiere at SXSW would have set you straight. They probably heard the deafening reception over in Houston.

“I didn’t make this movie just for gamers,” Spielberg told the crowd, though he mentioned that he’d been a hardcore gamer since discovering “Pong” on Martha’s Vineyard while making Jaws. “I made this for everybody.” By which he meant, we guess, people who also love movies and TV shows and comics and other fanboy fixations. “The pop-culture references can be seen out of the side windows,” he added, “but if you look right out of the front windshield, you can follow the story.” You don’t need to be a pop scholar on the level of Wade Watts (Tye Sheridan), a.k.a. the online gamer Parzival, who hunts for keys and clues left by the late Steve Jobs-like founder of OASIS (a virtual-reality hub that contains multitudes) in a global contest to win his fortune. But it certainly helps. A lot.

And what’s happening out the front windshield – Wade, his fellow online warrior/crush Artemis (Olivia Cooke) and their co-conspirators are locked in a race against time to win the game before Ben Mendelsohn’s tyrannical CEO does, thus saving the online world from certain lack-of-net-neutrality doom – is as straightforward a story as they come. But it’s the scenery out that side window that makes the biggest impact and overwhelms everything. There’s a race sequence that will be familiar to anyone who’s handled a joystick or console controller, and it’s a complete rush; it’s also so filled with nods to things you know (famous movie monsters, famous TV-show cars and anime motorcycles, Spielberg’s own dino-centric past work, etc, etc, etc.) that you occasionally lose sight of who’s doing what and where and why. It makes logical sense: If you were online gaming in a big multiplayer forum and could follow-your-bliss customize your ride, why wouldn’t you race in the Batmobile? But as any cook will tell you, too much tasty spice can take over the flavor and kill a meal. 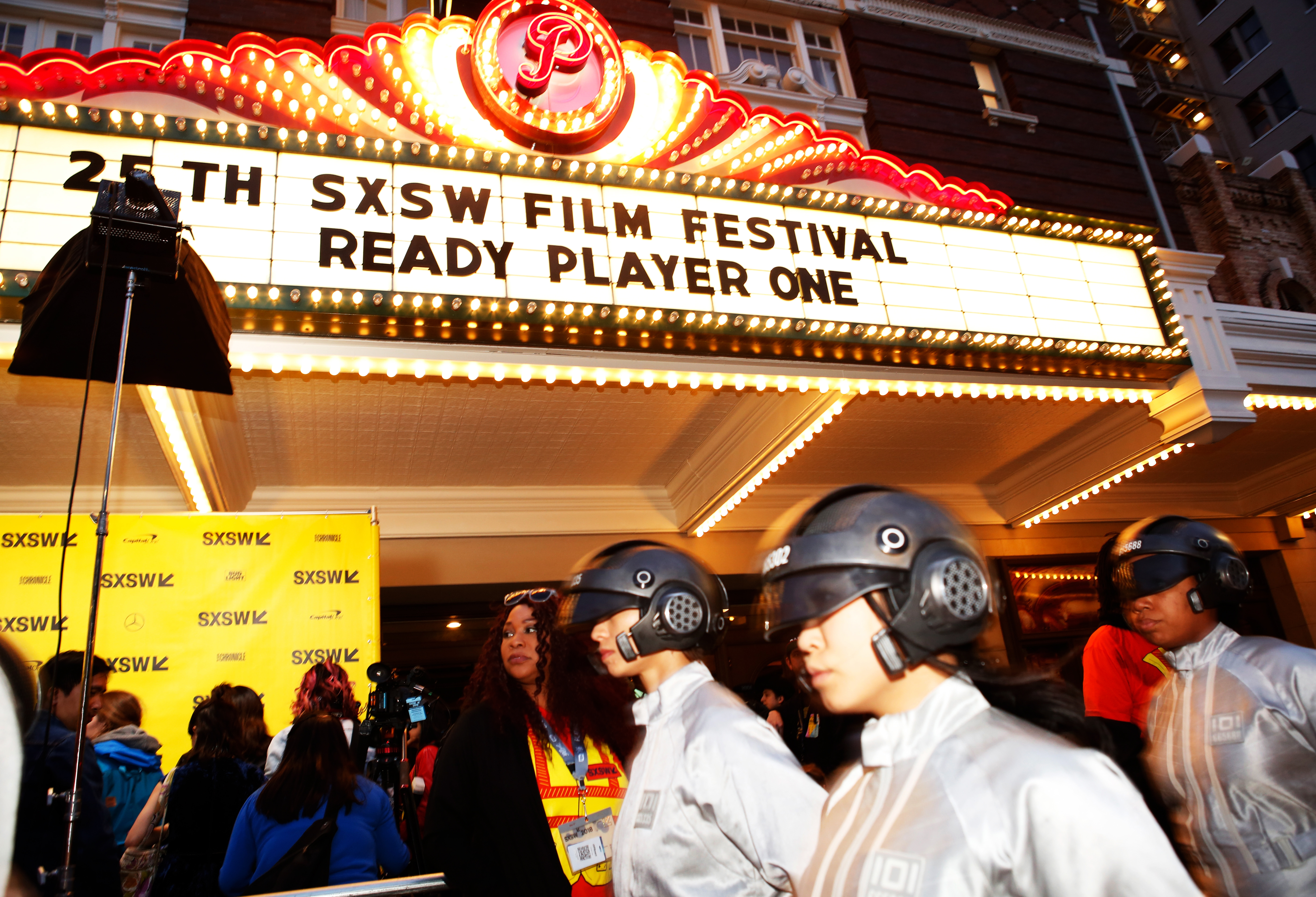 The best scenes of Ready Player One – we don’t want to be totally spoilertastic [super-loud cough] but let’s just say that lovers of The Shining are in for a big treat – are able to integrate these elements in a way that apes what made Cline’s novel such a compelling read. You don’t even mind the fact that a lot of the online-world stuff resembles video-game cutscenes and the digital stuff can look slightly one-dimensional, because you can feel Spielberg tapping into a collective imagination shared by geeks and non-geeks alike. You sense that he’s getting just as high on the mash-up fumes as audience members are. The worst parts make the film feel equally exhilarating and exhausting, and run the risk of turning it into Easter Egg: The Movie. So much stuff crowds the frame for so long that it becomes hard to take it all in, even if viewers are used to processing information now at Pentium-chip speeds in their head. There’s a lot to love here. There’s a lot to hate. There’s just a lot of everything, period. The key is getting through it all with enough bandwidth before Game Over flashes onscreen.

Still, Spielberg wanted to make an interactive movie, a bells-and-whistles gesture designed to play big and reward numerous viewings and be pored over by folks willing to search every nook and cranny. In that respect, it’s an interactive-movie success: You could tell that the crowd here was into every aspect, screaming and going apeshit when particular fan favorites from past works showed up. Nostalgia is a currency, and it spilled out everywhere like so many bonus-point coins. To paraphrase a famous quote about the Beatles’ performances, there wasn’t a dry seat in the Paramount Theater’s house. And when Spielberg and the cast came back out at the end, to take questions about their favorite old-school characters and everything else, you could practically see FINAL BOSS LEVEL UNLOCKED in cartoon bubbles above heads. He made this movie for everyone, sure. These were the folks the director wanted to win over. Mission accomplished.