Pick any random song by the Coup – we suggest “Fat Cats, Bigga Fish” from their 1994 album Genocide & Juice, or “My Favorite Mutiny” from 2006’s Pick a Bigger Weapon – and you’ll get complex anti-corporate screeds and much dropping of Chomsky-esque political science against layered, funky-as-fuck beats. An extended middle finger against the powers that hold people back is this Bay Area hip-hop collective’s raison d’etre; not for nothing did they name a song “5 Million Ways to Kill a C.E.O.” (We also highly recommend blasting that cut off 2001’s incendiary Party Music as well.) So the fact that Coup co-founder Boots Riley’s directorial debut, Sorry to Bother You, is a take-no-prisoners takedown of big business, mass media, wage-slave labor, blithe billionaire bros and modern life in general will surprise no one even casually familiar with the man’s day job. If anger is an energy, this broad code-switching comedy is a hundred thousand watts of fuck you. That’s the movie’s blessing and its curse.

Why 'Mudbound' Star Jason Mitchell Is This Generation's Next Leading Man

Our Candide is Cassius Green (Atlanta‘s Lakeith Stanfield), an Oakland resident stuck in an overall rut. A telemarketing gig barely covers living in his uncle’s garage or an evening out with his girlfriend Detroit (Tessa Thompson, all curls and fury), an activist who twirls signs by day and defaces billboards by night. Life goes nowhere, the rent is too damned high, time is running out. Then, quicker than you can say “I will singlehandedly destroy the magic-negro caricature forever,” Danny Glover appears and posits that Cassius try speaking with a Caucasian voice to customers. “Talk white, but not like Will Smith white,” he says – a line that had the crowd both cracking up and nervously glancing at Jada Pinkett Smith, who was in the audience.

So Cassius picks up the receiver, David Cross’s voice comes echoing out of our hero’s mouth and boom! Success beyond his wildest dreams. While his fellow employees are talking unionizing and walkouts and workers’ rights, the new company MVP is taking the elevator to the “power caller” penthouse. His only client: Worry Free, a conglomerate that sells factory dormitories as the hip new solution to all of your problems. (Think Pegatron, but you know, super fun!) In other words, he’s now responsible for pitching the epitome of multimillion-dollar exploitive evil. Does he speak up or sell out? How well can a person sleep at night under new high-thread-count sheets when they’re stained from the blood on his or her hands?

Riley isn’t afraid to be an equal opportunity offender or let loose friendly fire: He’ll call out company flunkies yet make his performance-artist heroine seem ridiculous by staging a piece involving a middle-finger merkin, chucked cell phones, sheep’s blood and dialogue from The Last Dragon. An activist beans Cassius with a Coke can then becomes a viral video celebrity co-opted by Cola Inc.; everyday people fight for dignity but also tune in en masse to watch America’s most popular TV show, I Got the Shit Kicked Out of Me. He’s got a deservedly special bone to pick with powerful, however — especially Armie Hammer’s coke-snorting Steve Lift (that name!), who’s essentially a more entitled version of his slave-owner from The Birth of a Nation. It would be a shame to reveal in detail what happens once Cassius is summoned to meet with his overlord and discovers what’s really going on. The fact that it involves horse cocks tells you all you need to know.

Satire is what closes on Saturday night, but it’s powerful ammo in the right hands and aimed at the proper punch-upwards targets. When it casually bullseyes — say, when Omari Hardwick’s manager is literally bleep-denied a name after scaling the corporate ladder, or when Stanfield just yells the N-word and drives a white, rap-craving crowd into a joyous frenzy — Sorry to Bother You feels like weaponized hilarity. When it goes scattershot, it can seem like a series of between-songs album skits filtered through a Black Mirror app. You wish that the movie’s attack was less wildly spewed machine-gun fire and more like a sniper’s bullet; the all-out rage ends up drowning out any attempt to articulate what’s behind the cri de couer.

Which may, oddly enough, make it the perfect movie for our current paranoid, screwed-beyond-belief moment: You’ve got to be loud, proud and prowling the more extremes edges of the fantasy/funny business to rise above the din. What the movie lacks in focus it makes up for in flipped-bird absurdity. It refuses to apologize for bothering people in the name of waking a few of them the fuck up. 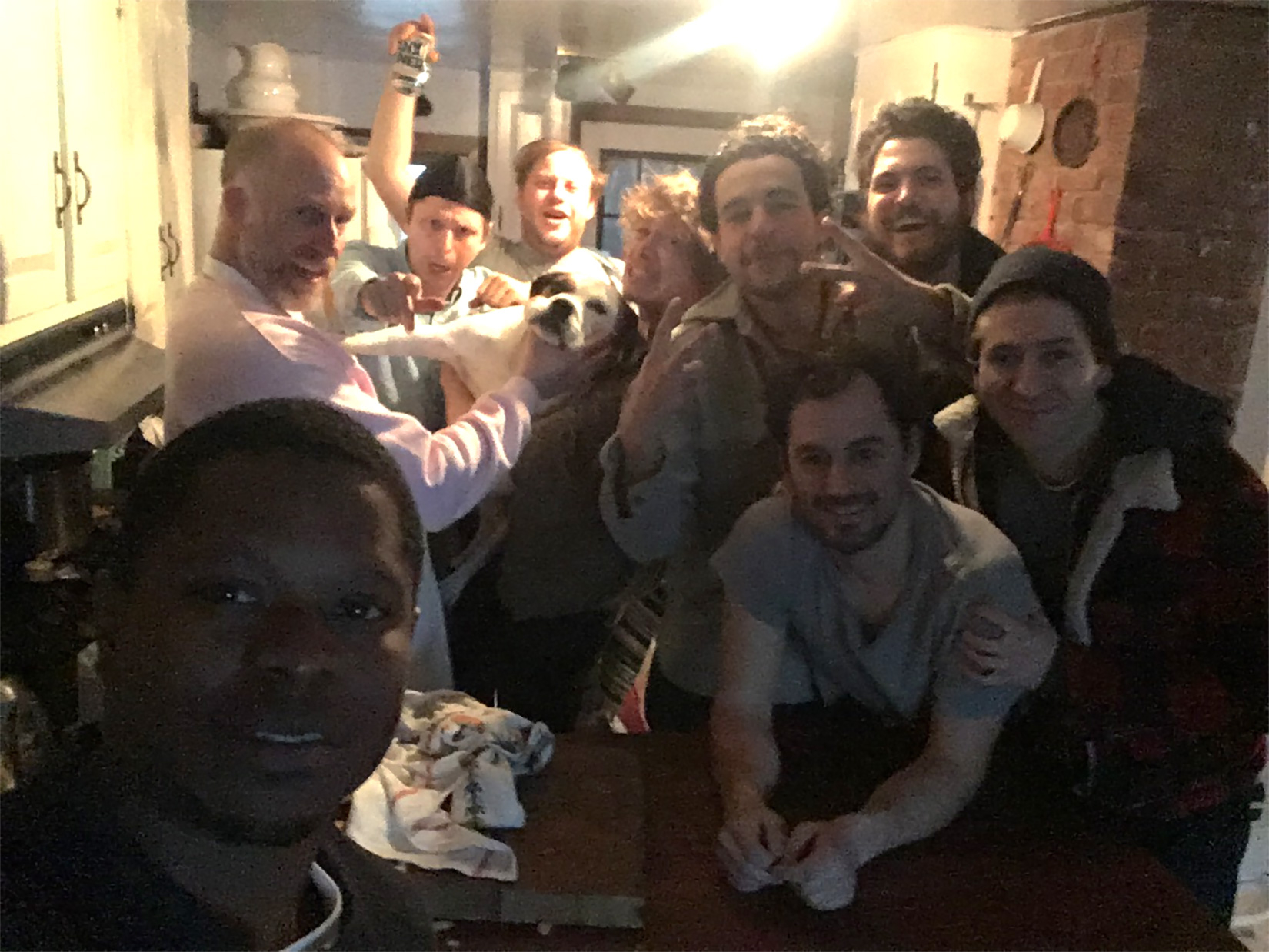 If Sorry to Bother You is a sledgehammer, then Sebastián Silva’s Tyrel is a slow death by a thousand cuts — a case study in alienation that starts with race and ends with complete personal micro-to-macro meltdown. For starters, “Tyrel” isn’t even its central character’s moniker: Jason Mitchell’s chef, who’s joined his best friend (Girls‘ Christopher Abbott) for a guys’ weekend up in the Catskills, is actually named Tyler. He’s called Tyrel by a few of the buddies he meets before gently correcting them, and whether they’ve genuinely misheard him or simply assumed that was his handle because it sounded more African-American to their white ears is never clarified. It doesn’t need to be. His odd-man-out status is established from the jump, and that’s before Get Out‘s Caleb Landry Jones goes into his patented twitchy what’s-up-bro act.

The mere presence of that movie’s pasty-faced fratboy, along with the fact that it takes place on Trump’s inauguration day, might lead you to believe that the movie is either going to be a trip to a more pastoral Sunken Place or an Us v. Them referendum. Instead, Silva and company go the road less traveled, and my god, does it make all the difference. Other than a game in which Tyler has to imitate an old New Orleans woman – the look of self-contempt on his face after he does it flawlessly feels like a slap to ours – there is little that’s overtly racist happening among these assembled gents. The host for the weekend is Argentinian; one of the guests, played by Faith No More’s Roddy Bottum, is openly gay. They all hate our new commander-in-chief. But Tyler still feels like he does not belong, and the copious consumption of alcohol by everyone only exacerbates the situation. Superficially harmless interactions make him feel boxed in a corner. Who knew that R.E.M. sing-alongs could be such microaggressions?

By the time Michael Cera shows up, sporting a bizarre elephant mask and offering to buy Tyler’s do-rag, the sense that there’s no escape from the chaos – no space to just be – feels complete. Even after things go from simmer to boil-over, Tyrel suggests that it does not take a catastrophe or a boogeyman in a white hood to make a person of color feel they’re not part of the program. Little things add up into a cumulative tone-deafness, cultural-difference dismissal and free-form piling on that fuels our hero’s self-generated isolation and inebriation. Good intentions end up curdling as we go down the rabbit hole alongside Mitchell’s disintegrating, drunken dude. It’s a stingingly intimate portrait of a fly-in-the-buttermilk scenario laced with testosterone and too much Irish coffee.

And while Silva’s direction, a impeccably cast ensemble of benign bros and a tone that impressively never goes full-tilt batshit all contribute to the quality, you have Jason Mitchell to thank for making this work so damned well. Straight Outta Compton proved he could hold a screen by sheer badass charisma alone and Mudbound demonstrated that we had a next-gen leading man in our midst if only we could find him the parts. Tyrel proves that he’s flat-out one of the finest actors today, full stop. It’s not just that he’s letting you peek at everything that’s going through his head as navigates unfamiliar waters while not rocking the boat. Mitchell is also showing you a man crumbling under the pressure of trying to meet people halfway and finding that the lines keep shifting.

In a festival that’s been slow to deliver across-the-board great movies but has showcased a slew of genuinely great performances, his work here still stands out above the pack. This actor needs more roles like this that are worthy of him. Your move, filmmakers.