It’s that vocals that always gets you first – the snarl that comes through Joan Jett’s singing, sandpaper-rough around the edges and 100-percent fuck-you attitude. Yes, she’s a first-class rhythm guitarist (listen the opening of the Runaways’ “You Drive Me Wild” and tell us that’s not gloriously, gut-punchingly rifftastic). But that voice … that’s what rock & roll sounds like. Seductive. Jagged. Rebellious. Like her vocal cords are going to jump out of her throat and kick your ass.

Bad Reputation, Kevin Kerslake’s doc on Joan of Rock that premiered Monday at Sundance, takes it for granted that we know that voice intimately, whether you’re a die-hard Jett-setter or just know her as the raven-haired tough chick singing “I Love Rock and Roll” on MTV way back when. But he adds a little gift at the end of his portrait, playing an isolated track of Jett barking out the title song without any backing. It’s just the first verse, no guitar or drums, no frills, and you can hear the glam influences, the punk touches, the pop-music momentum in her phrasing. It’s part catchy hook and part left-hook, and as the movie reminds us, a nice little corner Jett has occupied in music for forty-plus years regardless of whether she’s playing state fairs or arenas.

Sundance 2018: 'Sorry to Bother You,' 'Tyrel' Rip on Race, Toxic Masculinity and Us

“Girls don’t play rock and roll,” a 13-year-old Joan is told when she hauls her Sears Silvertone guitar over to a teacher’s house. “Tell me I can’t do something and it’s a sure way to get me do it,” she notes, and Bad Reputation spends the rest of its running time demonstrating her devotion to proving every doubter wrong. We follow Jett as she goes from Rodney Bingenheimer’s underage disco/freak-magnet HQ to making demos for legendary sleazebag Kim Fowley; founding the Runaways, becoming big in Japan (really) and producing an album for legendary L.A. punks the Germs; hanging with Sid Vicious, hooking up with bubblegum musician-turned-superproducer Kenny Laguna and forming the Blackhearts. Some hit singles and success follow, as does a cooling-off period, a part in “the rock and roll cancer movie” Light of Day next to Michael J. Fox and some lean years. Then riot grrls and Warped tours turn her into reclaimed, recharged feminist-by-default icon. The one constant: playing loud, fast, filthy, “pussy to the wood” music.

It’s a lot to pack into two audience-friendly hours, which may be why Kerslake – an old hand at music video journals and bio-docs – barrels through everything at the speed of a Blackhearts rhythm track. Jett’s animal rights activism and mentoring of younger musicians like Kathleen Hanna (who appears with her Beastie husband as two of a dozen talking heads) get a good deal of play; her personal life does not, other then the telling quote “Rock and roll is not a person and I like to think I know the difference.” Otherwise, she’s a monastic devotee to the perfect power-chord combo. Her longest lasting – and per the film, apparently her only – relationship seems to be with Laguna, as they play out a Platonic ideal of a bickering old married couple sans the sex (“Burns and Allen in reverse” is how Hanna describes them).

So it was great to hear Jett talk about her parents during the postscreening Q&A, how she was estranged from her dad until she spotted him at a show and how her mom used to talk with Runaways manager Fowley “for hours on the phone, daily” during the band’s heyday. Even better: When a fan started to talk about seeing Jett perform in the 1980s, the rock star said, “Hold on, lemme come to you” then waded into the crowd to speak to the woman face to face. You get very, very little of the intimate former version and a lot of the latter charismatic, superstar-of-the-people version in Bad Reputation – it’s the sort of portrait that gets by largely on the pleasure of its subject’s company. The good news is: Why wouldn’t you want to hang out with someone that badass for 90 minutes? 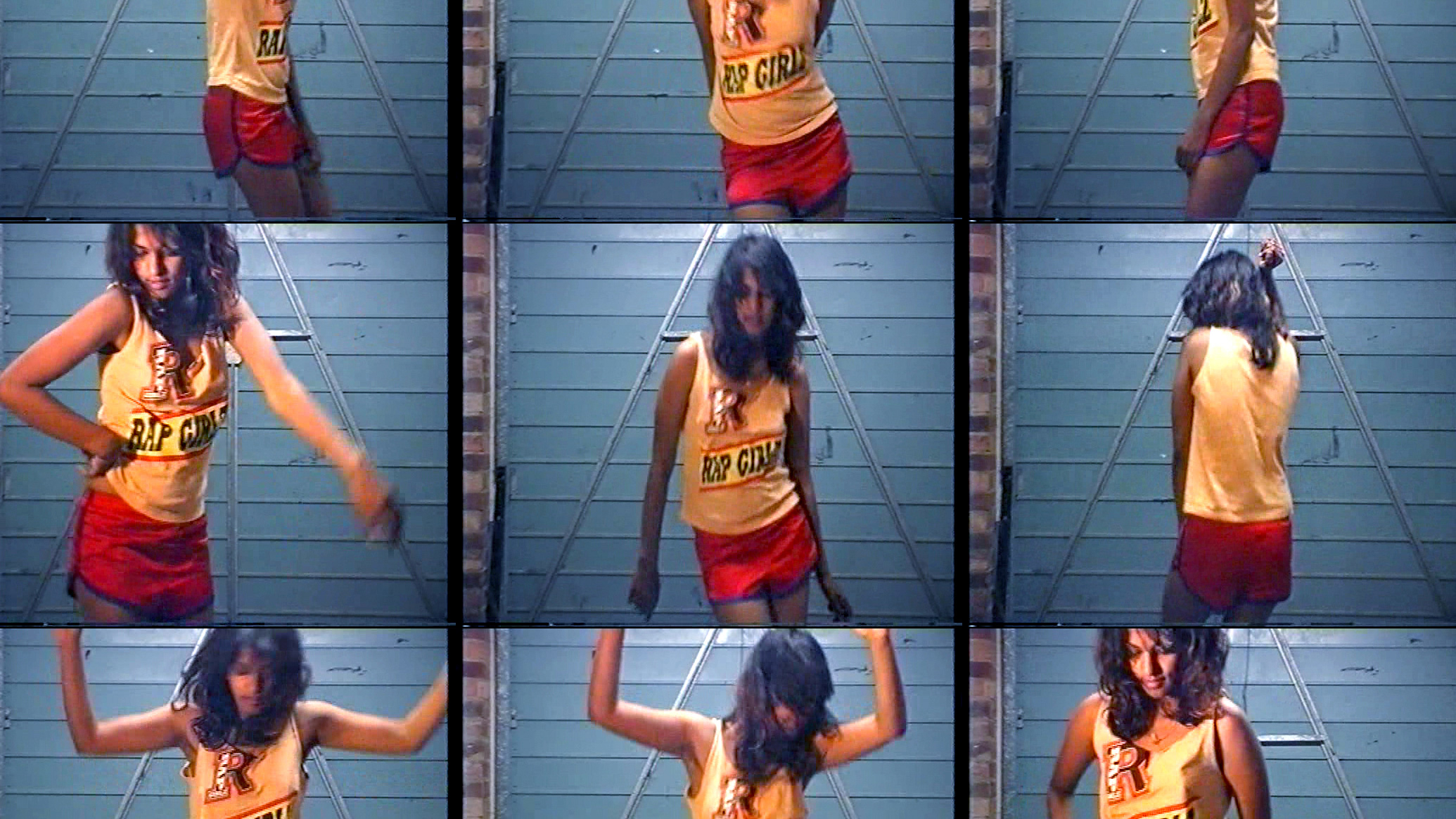 You get a hell of a lot of the personal, however, in Matangi/Maya/M.I.A., a long-in-the-works look at the Tamil immigrant turned global rap-pop juggernaut that feels like a home movie dotted with the occasional musical interlude. Mathangi “Maya” Arulpragasam and director Steven Loveridge go way back to their art-school days, long before world tours and boom-boom-boom-take-your-mon-eyyy choruses; both of them wanted to be filmmakers. Maya had used music as a refuge for her feelings of alienation at being a Sri Lankan refugee living in London since she’d been a kid, going from Madonna to Public Enemy. But she had been documenting her life for a while, from return trips to her politically fraught country to accompanying Elastica’s Justine Frischmann for a commissioned tour diary. There was plenty of origin-story material and behind-the-scenes, dancing-for and crying-into-the-camera snippets to go around.

So yes, if you want to hear about her need to follow her own musical muse, how boyfriend/collaborator Diplo helped her meld and sharpen her multi-culti sick-beats sound, her writing process or where the genius idea to sample the Clash for her hit “Paper Planes” came from – that’s missing in action. Remember the impact 2005’s Arular made when you first heard it? Here’s the film on its making: She plays a “Galang” demo for XL records; Arular gets 10,000 downloads on Napster; she steps on a stage and rocks a mike. Boom, boom, boom. That’s how bare bones M/M/M treats the actual output. Concert scenes come and go in a blink. We do not see her eureka moments or studio breakthroughs. There’s little what or how, but a ton of why.

Because Loveridge is, admittedly, after something else. In one of the funniest and most uncomfortable Q&As we’ve ever experienced at Sundance, the director explained – to us and to Maya, standing next to him after having just seen the finished product for the very first time – that someone could find performance footage of her anywhere. He wanted to dig deep into the other stuff: her dad’s history with the Tamil Tigers, her experience as an immigrant, her relationship with the nation she was forced to flee, her own political awakening and her frustration over the media expecting her to just sing, look pretty and and shut up instead of, y’know bringing up genocide. Yes, there will be truffle fries – the infamous Lynn Hirschberg NYT magazine profile gets a lot of screen time, as does the Super Bowl incident involving her televised-to-millions middle finger.

The result is a fascinating and insightful mess that puts Maya, rather than M.I.A., front and center. That surprised the subject herself, of course – that and the fact the movie was finished at all, she added. The backstory behind this, as she recounted from the stage, started with her giving him tapes for a live-music project back in 2013. Loveridge then “disappeared for five years” and Maya had to hire someone to surreptitiously try to steal the tapes at one point. (It gets even more complicated.) “It wasn’t what I expected,” she said, as Loveridge fidgeted around. Then: “It’s so long, I’m surprised people didn’t walk out.” The old friends seemed slightly more at ease by the end of the audience questions; hopefully, everyone involved with the project won’t change a thing. Matangi/Maya/M.I.A. offers the sort of all-access peeks that most celebrities and headliners aren’t crazy about having out there. But damned if you don’t understand Ms. Arulpragasam by the time the lights come up.