You could argue that most folks — or at least those who’d care enough to nab tickets to a documentary about the Grateful Dead — already know the group’s story backwards and forwards. They can tell you that Jerry Garcia started out as a boho banjo player in a jug band, and that he enlisted avant-composer Phil Lesh, fresh-faced folkie Bob Weir, blues aficionado Ron “Pigpen” McKernan and drummer Bill Kreutzmann to form the Warlocks They’ll fill you in about the acid tests and how these gents became the San Francisco hippie scene’s poster boys. They’ll chart the path from psychedelic experimentalists to neo-Americana troubadours, road hogs to stadium juggernauts, cult band to corporate Rock Inc. entity to free-form jam cosmonauts. And they’ll tell you about Deadheads — most of the folks assembled for the Sundance premiere of Long Strange Trip were almost assuredly deadheads at one point. Some of the audience members probably have cameos in the concert-crowd shots. A few of them might even remember the show themselves.

Ronnie Tutt, Drummer for Elvis Presley and the Jerry Garcia Band, Dead at 83

But though their story has been told time and again via books, blogs, peripheral docs and various rock-history miniseries, the Dead have long deserved a feature-length portrait that charts their rise and effective demise via Garcia’s passing in 1995. So even if the audience who’d gathered last night at the Yarrow Theater to see Amir Bar-Lev’s marathon-length look at the group — one clocking in at just under four hours, or to put it in Deadhead terms, two mid-Seventies live renditions of “Dark Star” — knew the journey, the movie reminds you that there are still lots of miles left to travel. Long Strange Trip isn’t out to justify its existence; it’s simply trying to guide you through a winding trek that covers both well-paved and bumpy, unkempt backroads. Anyone who walked in thinking there was no more left to be said exited the theater after midnight with the feeling that, when it comes to the boys in the band, we’ve still barely scratched the surface.

Beginning with an anecdote about Garcia having an affinity for Frankenstein as a kid (the monster shows up in old movie snippets throughout; it’s the one filmmaking tic that wears out its welcome), Trip proceeds to hit every countercultural signpost: beatnik infatuations, bluegrass love, Haight-Ashbury’s bubble and bust, belligerence toward the record company, the threat of rock and roll burnout. The key moment, however, is when the bearded bandleader has an epiphany while looking at the Watts Towers. He doesn’t want to construct something that’s a permanent monument. Garcia would rather the band live in the moment with its music – spontaneity, fun and freedom are the goals. Everything else, personally and professionally, are simply the means to that end. The playing gets better, and more far-out; cue an explanation behind the “Space/Drums” portion of gigs. A family forms around the Dead’s punishing touring schedule forms. Casualties occur. Creativity rules. Chaos reigns.

Bar-Lev doesn’t shy away from the tolls that were paid by playing with the band, or how this peaceful group who sang of sugar magnolias and china cat sunflowers attracted some seriously dodgy outlaw elements. The ability to go into unexplored territory onstage and create things like Jerry’s solo during the Europe ’72 version of “Morning Dew” (which a sound man offers a long soliloquy about) is merely the flip side of a do-whatever-you-want-man coin that also attracted Hell’s Angels, drug overdoses and out-of-control fans. “Good doesn’t mean much without evil,” lyricist John Perry Barlow recalls Garcia saying, noting that the band was always “comfortable with paradoxes.” And while it tends to skip over specifics in the band’s lore (no album making-ofs, no Bourbon St shakedowns, a mere mention of the Pyramids shows), the movie nails the push-pull tension that made these guys such a majestic music-making mess. This is where the long-form rock-doc contextualizing really pays off. Especially once you start getting into the Deadhead years.

Long Strange Trip devotes a lot of time to fashioning a sort of Deadhead 101 primer, deep-diving into the community around the shows as they begin to trade tapes and the traveling circus aspect of the band really takes form. For tie-dyed-in-the-wool followers, the effect is like watching a movable scrapbook; for everyone else, you get a vital understanding of how much the audience bonding was part of the trip itself. The irony of an improv-heavy group being one of the most archived musical entities ever gets center stage; if you’ve ever wondered what famed Deadhead Al Franken’s favorite rendition of “Althea” is, you can wonder no longer (Nassau 1980, FYI). You need almost an hour of screen time on the phenomenon to get why a relic of the Sixties became college-student catnip in the Eighties and Nineties, why shows became the final wild frontier – “the spirit of being able to go out and have an adventure in America at large” per Garcia – and why the media portrayed the Deadhead Nation as both a novelty and a source of mayhem.

And why all that mass adulation eventually wore on Jerry in a huge way. This last act, in which you see the touches of gray take over and the escape hatches turn into cages, is where the movie genuinely becomes essential regardless of whether you know how and where the trip ends. To see Garcia virtually imprisoned in a hotel room, afraid to talk to the crowd because “he knew they hung on his every word” and forced to go out on the road again (and again and …) is to see how someone who valued freedom found himself at the mercy of a beautiful multimillion-dollar beast. Daughter Trixie Garcia, ex-girlfriend Brigid Meier, road crew friends and band members attest to how, even after his coma and healthy comeback, the need to play and how he dealt with the pressure drained him. A colleague describes the last half of the film as “a heartbreaking profile of fame,” and Bar-Lev keeps underlining the recurring motif of death in Jerry’s songbook.

By the time you get to the turbulent, full-jam-ahead soundtracked montage that builds to Garcia finishing an interview and walking out of the frame, you feel like you’ve gone from point A to point Z – the same feeling that the band members repeatedly said was the point of the endeavor all along. It ends with the frontman’s passing, eschewing the Fare Thee Well shows and various side projects/collaborations/one-offs in favor of closure. It’s a love letter to Jerry & co. and their lifer fans in many ways, but it’s also a great rock doc designed to let everyone get burned by the fire on the mountain. Long Strange Trip gives you a glimpse into the artists who risked their lives in search of a transcendental moment via the right combo of chords and camaraderie. It’s not nearly long enough. 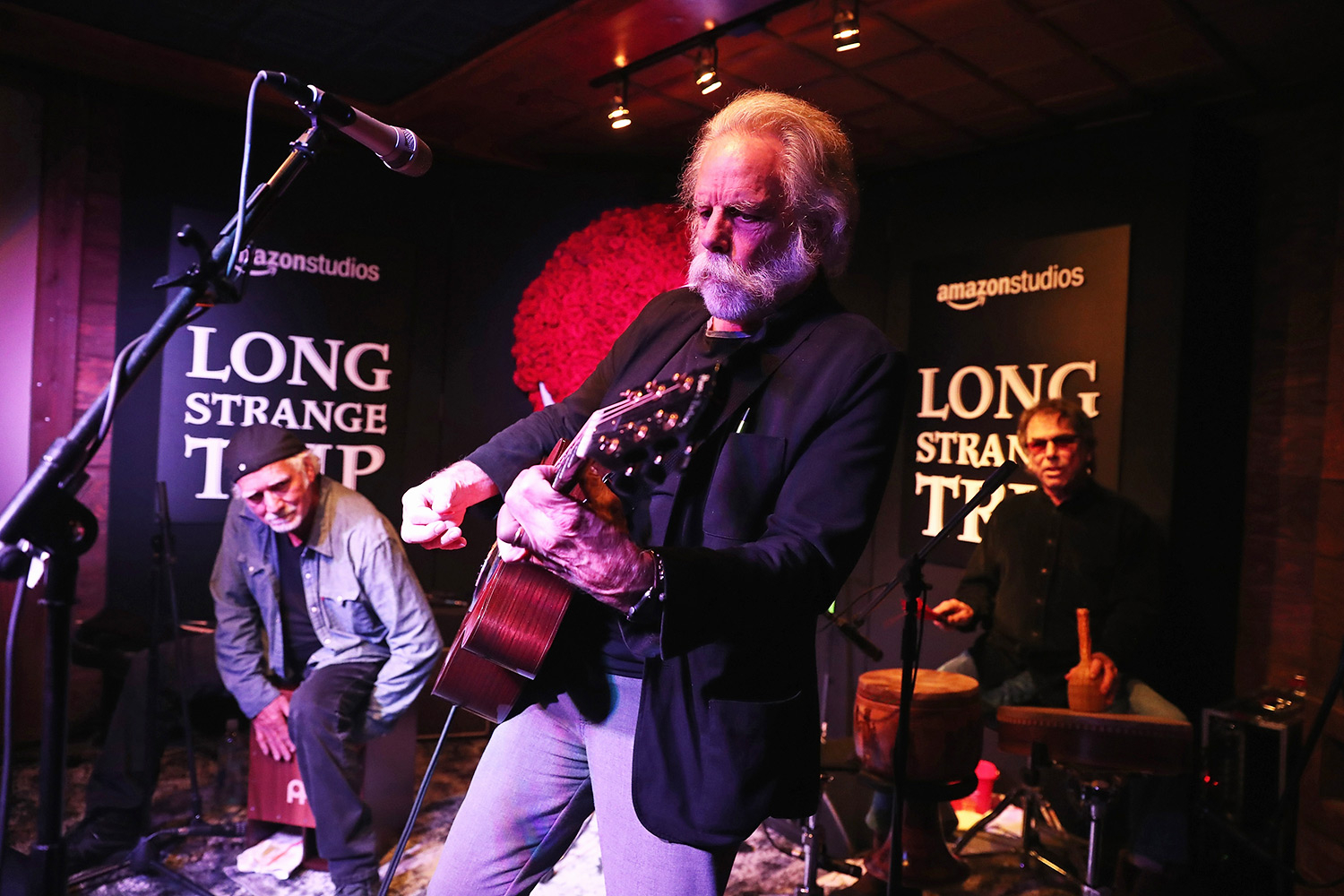 The night before the premiere, festgoers and Deadheads were treated to something particularly special: An intimate acoustic performance by Weir, Kreutzmann and Hart, in a room roughly the size of their Ashbury St. pad’s kitchen, to celebrate the doc’s unveiling. “We’re going to play America’s favorite game: Stump the Drummer,” Weir said, before launching into Little Feat’s “Easy to Slip” and waiting for the drummers to catch up. The ebb and flow of the song, with the guitarist gently coaxing notes out of the solo in between violently strumming through the verses, immediately set the tone — you could see the percussionists exchanging looks as they synced up a back-and-forth backbeat, both sitting in front of giant skull-and-roses decoration.

Blues Traveler’s John Popper joined them onstage — “Let’s do that A-minory thing” Weir suggested — and blew his harp on “West L.A. Fadeaway.” That was followed by “Loose Lucy,” which almost nosedived thanks to tech problems and nearly resulted in a polyrhythmic pileup on Hart’s part before the trio mysteriously managed to prop it back up. “We’re gonna do a quiet one,” Weir said, before playing the opening part of the show’s highlight: A delicate rendition of “Peggy-O” that felt absolutely haunting. People danced and cried, sometime simultaneously. Woody Harrelson came up and did his best Elvis impersonation for “Heartbreak Hotel” — you could almost see a smile beneath Weir’s prospector-in-training facial bush.

That led into the guitarist and friends ripping full-throttle into “Not Fade Away,” with the singer screaming out of the choruses, Harrelson dancing a sort of Sixties go-go twist and Kreutzmann and Hart hitting everything in sight. Signaling the audience to clap along, Weir stopped the music and the four men exited the building. The crowd was still singing three minutes later. No one wanted the trip to end.