The new trailer for the much-anticipated Star Wars: The Last Jedi has arrived. The latest preview for Episode VIII in the new Star Wars trilogy during ESPN’s Monday Night Football broadcast.

The latest preview opens with a look into Kylo Ren’s turn to the Dark Side as Supreme Leader Snoke, a shadowy evil in The Force Awakens, tells the son of Han Solo and Princess Leia, “When I found you, I saw raw, untamed power. And beyond that, something truly special.”

The trailer then shifts to Rey’s training with Luke Skywalker, where her power of the Force amazes the Jedi. “I’ve seen this raw strength once before. It didn’t scare me enough then. It does now,” Skywalker says.

The trailer later insinuates that Kylo Ren grappling with whether to destroy a spaceship carrying his mother, the now-General Leia Organa, a decision that would allow him “to become what you were meant to be.”

While the stories of Kylo Ren and Rey once again take center stage in the new trailer, the latest preview also shows Finn facing off in a battle against his former commander Captain Phasma as well as the first look at Supreme Leader Snoke that isn’t an ominous projection.

The trailer ends mysteriously with Rey telling her adversary Kylo Ren, “I need someone to show me my place in all this,” as he extends his hand to her.

In addition to the second trailer, Star Wars also opened up ticket preordering for The Last Jedi ahead of its December 15th release as well as unveiled Episode VIII‘s theatrical poster, which places a hooded Luke Skywalker hovering above of a lightsaber battle between Rey and Kylo Ren. Leia, Finn, Poe Dameron, Chewbacca and R2-D2 and C-3PO are also housed in the image. 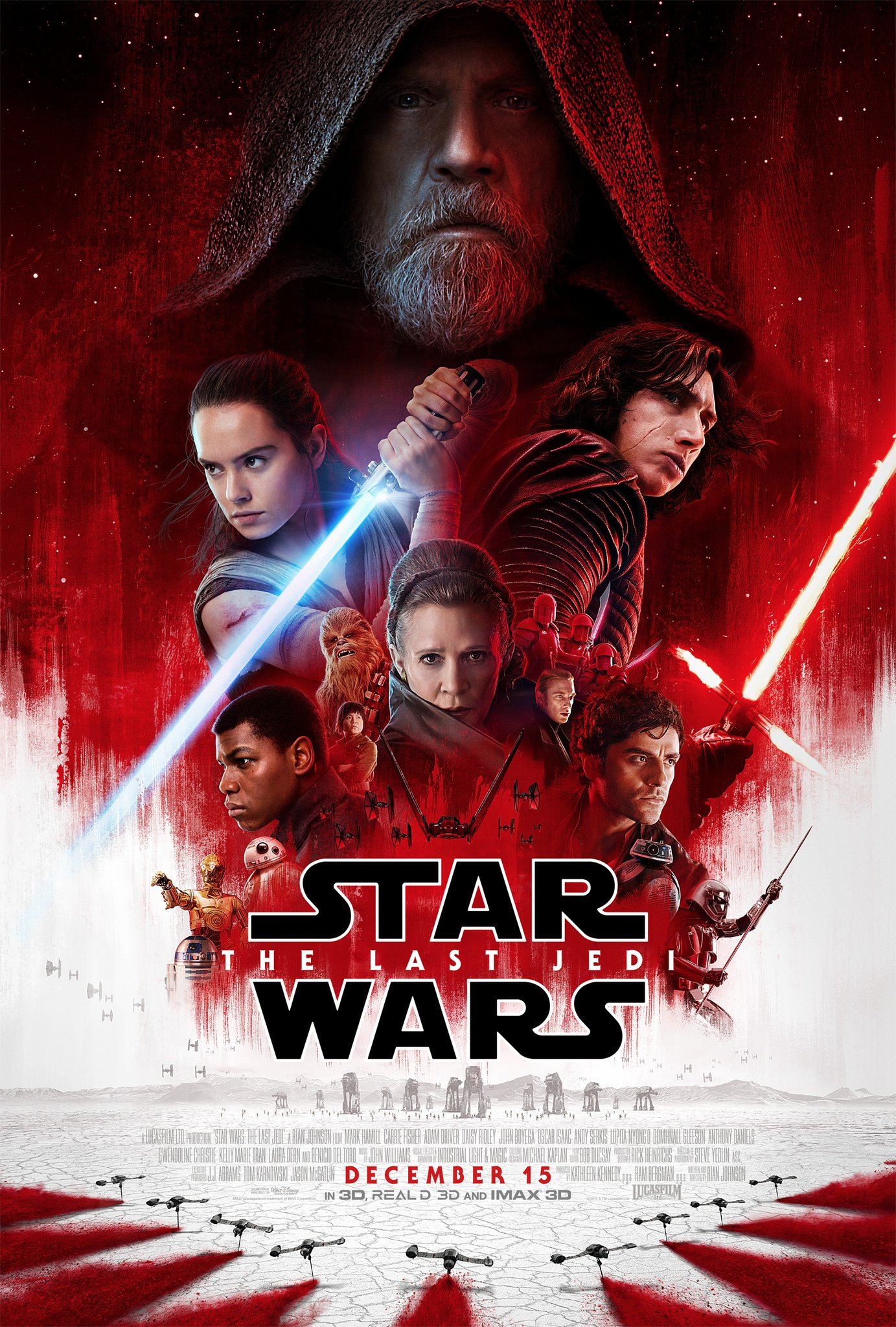 A battle pitting TIE fighters and Imperial Walkers against Rebel “ski speeders” is seen at the bottom of the poster, a fight that was also teased in the first Last Jedi trailer.

The first Last Jedi trailer opened with Rey practicing her lightsaber skills and use of the Force. In another scene, Rey hands Anakin Skywalker’s lightsaber – seemingly lost when Darth Vader cut off Luke Skywalker’s hand in The Empire Strikes Back – back to Luke. Kylo Ren’s battered mask (coupled with the distinct sound of Darth Vader breathing) and glimpses of Finn, Admiral Leia Organa and Poe Dameron were shown. The preview ended with Luke Skywalker ominously saying in voiceover, “I only know one truth: It’s time for the Jedi to end.”

Prior to the second trailer’s debut, director Rian Johnson – who previously advised Star Wars to eschew all trailers and promotional materials associated with the sequel – tweeted of the trailer, “I [am] legitimately torn. If you want to come in clean, absolutely avoid it. But it’s gooooood….”

Mark Hamill agreed with Johnson and similarly issued a warning to Star Wars diehards: “I fully endorse this @rianjohnson endorsement: AVOID EVERYTHING YOU CAN FROM NOW TILL DECEMBER!!!!! #WordsOfWisdom #WellWorthWaitingForVIII“

The Last Jedi will be followed in May 2018 by the Ron Howard-directed anthology film dedicated to Han Solo. Star Wars: Episode IX, the final chapter in the new trilogy, arrives in December 2019 with The Force Awakens director J.J. Abrams back on board after producers parted ways with Jurassic World helmer Colin Trevorrow.