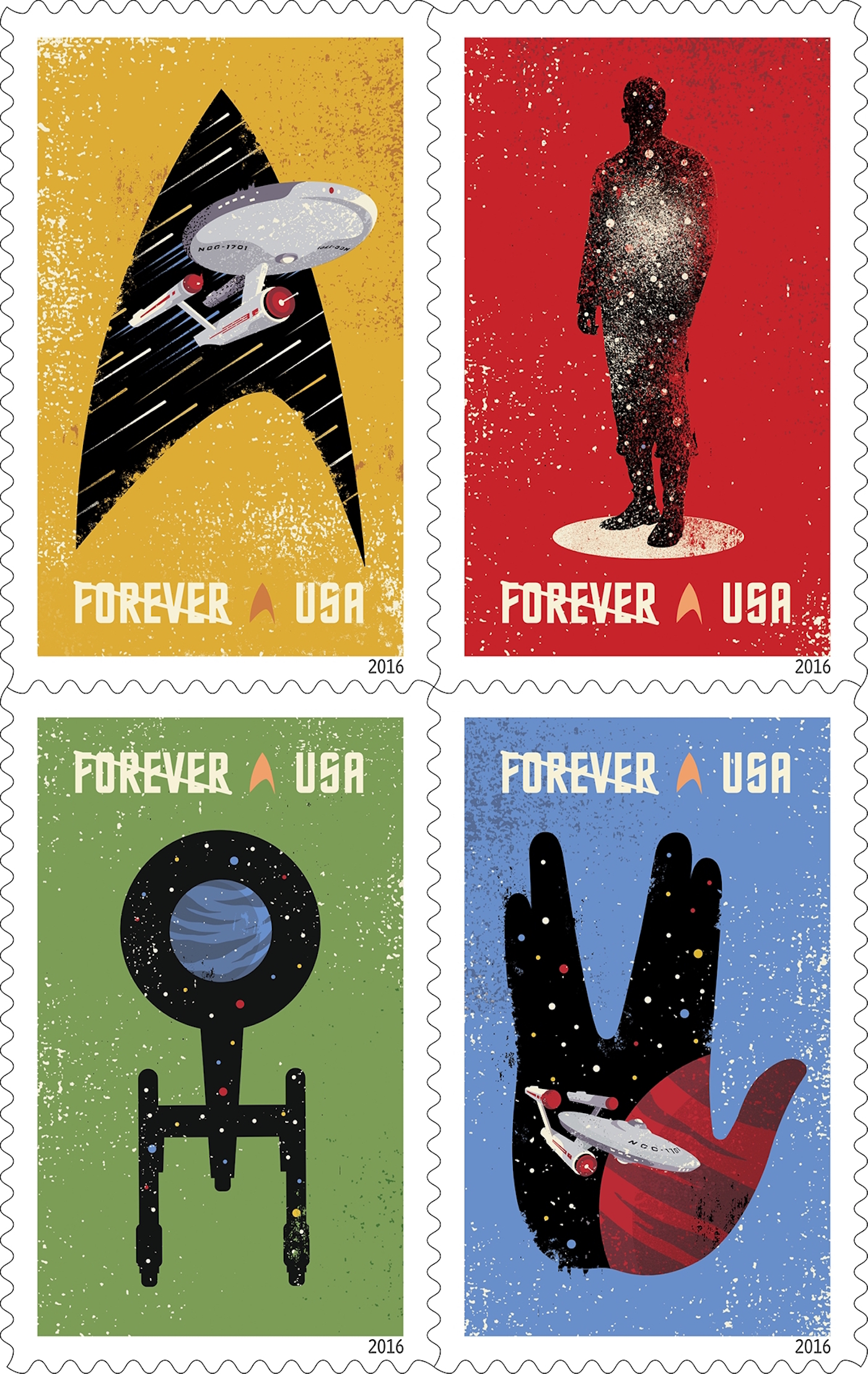 Star Trek started its long journey into the final frontier in 1966 with the premiere of its original series, and to commemorate the 50th anniversary of the franchise that went where no man has gone before, the U.S. Postal Service has unveiled four stamps dedicated to the cult sci-fi series.

The four retro-inspired Forever stamps – designed by Heads of State under the art direction of Antonio Alcalá – showcase the Starship Enterprise, the Starfleet insignia, a crewmember in a transporter as well as Spock’s iconic Vulcan salute hand gesture. The base of the stamps will also feature the words “Space… the final frontier,” taken from William Shatner’s opening lines as Captain Kirk on each Star Trek episode.

“The new Star Trek stamps showcase four digital illustrations inspired by classic elements of the television program,” the USPS said in a statement. Star Trek previously landed its own stamp as part of the USPS’ “Celebrate the Century” series in 1999. A release date for the 50th anniversary stamps wasn’t announced.

In other Trekkie news, the makers of Axanar – the crowdfunded, independently produced Star Trek prequel – responded to the copyright infringement suit filed by Paramount Pictures and CBS Studios that could prevent the fan film from being made.

“Like all fan films, Axanar is a love letter to a beloved franchise,” producer Alec Peters said in a statement to The Wrap. “For nearly 50 years, Star Trek’s devotees have been creating new Star Trek stories to share with fellow fans. That’s all we’re trying to do here.”

While Axanar takes place in the Star Trek universe, it doesn’t feature any of the franchise’s well-known characters, just the series’ mythology: “Axanar takes place 21 years before the events of ‘Where No Man Has Gone Before,’ the first Kirk episode of the original Star Trek. Axanar is the story of Garth of Izar, the legendary Starfleet captain who is Captain Kirk’s hero,” the film’s site describes the prequel.

“It is the Star Trek fans themselves who are most affected here,” Peters continued, “for by suing Axanar Productions to stop making our movie and collect so-called damages, CBS and Paramount are suing the very people who have enthusiastically maintained the universe created by Gene Roddenberry so many years ago.”