'Stand by Me' at 30: Why This Stephen King Movie Is Timeless - Rolling Stone
×
×

It’s a scorching summer day, and four neighborhood boys are trying to beat the heat by lounging in the shade near a junkyard’s water pump with a refreshing drink. As they cool off, they listlessly toss little rocks into an old tin can a few feet away, and fill the empty air with idle speculation over whether or not Mickey Mouse Club cast member Annette Funicello has started to develop breasts. Enjoying this brief interlude of nothingness, one boy happily sighs: “This is a really good time.” The dated specifics of this scene root it in its setting of Labor Day weekend in 1959, but the not-so-innocent innocence of these pint-size hooligans is eternal.

Rob Reiner’s 1986 film Stand by Me celebrates its 30th anniversary today, and though it took in a relatively modest $52.3 million gross upon its original release, it’s aged into a staple of youthful nostalgia for its deft straddling of the line between childhood and adulthood. The movie (and the Stephen King story its based upon) takes place at a juncture with which everyone is intimately familiar, where the last days of naïveté start to give way to the terrible truths of the grown-up world. And while that universal process of losing the blinders of childhood has provided fodder for countless coming-of-age stories, this yarn in particular has two crucial added benefits: Reiner’s flair for the little details that make up a kid’s life, and the encroaching darkness of King’s writing.

Scary Monsters and Superfreaks: The World of Stephen King, A to Z

Adapted from the bestselling author’s novella The Body, the film splits the difference between a carefree kid-friendly adventure and a drama grappling with early knowledge of how unkind the world can be. To a certain extent, it’s hardwired into the premise. Four bros-in-training — soft-spoken, bright Gordie (Wil Wheaton), his trusty pal Chris (River Phoenix), the resident wild-card Teddy (Corey Feldman), and pudgy butt-of-the-joke Vern (Jerry O’Connell) — catch wind that the corpse of a local boy is lying around town somewhere; they figure they’ll be local heroes if they can recover it. The spirit of death hangs so heavy over the entire movie that there’s practically a “Stephen King” autograph scrawled in the corner of every frame, right down to the heartrending closing narration from an aging Gordie (Richard Dreyfuss) laying out the cruel fates of his buddies. But the most affecting perils aren’t in death. They’re in life.

What sets Stand by Me apart from something like The Goonies, another millennial-beloved picture about scrappy kids setting out on a quest, is the fearlessness with which it confronts the ugliness of maturity. Goonies never say die; this quartet is stuck in a vortex of abuse and mistreatment, usually coming from a parent to their child. The film tacitly links Teddy’s volatile behavior to his fraught relationship with his father, a WWII vet who mutilated his boy’s ear during what we’re led to understand is a post-traumatic fit. (More touching still, Teddy flips into defensive mad-dog mode when a trashmonger dares to call his father a “loony.”) Chris comes from a family full of crooks and booze-hounds, and Gordie himself wrestles with profound survivor’s guilt over the death of his brother (John Cusack) while his grief-stricken parents have completely disengaged from the world around them. 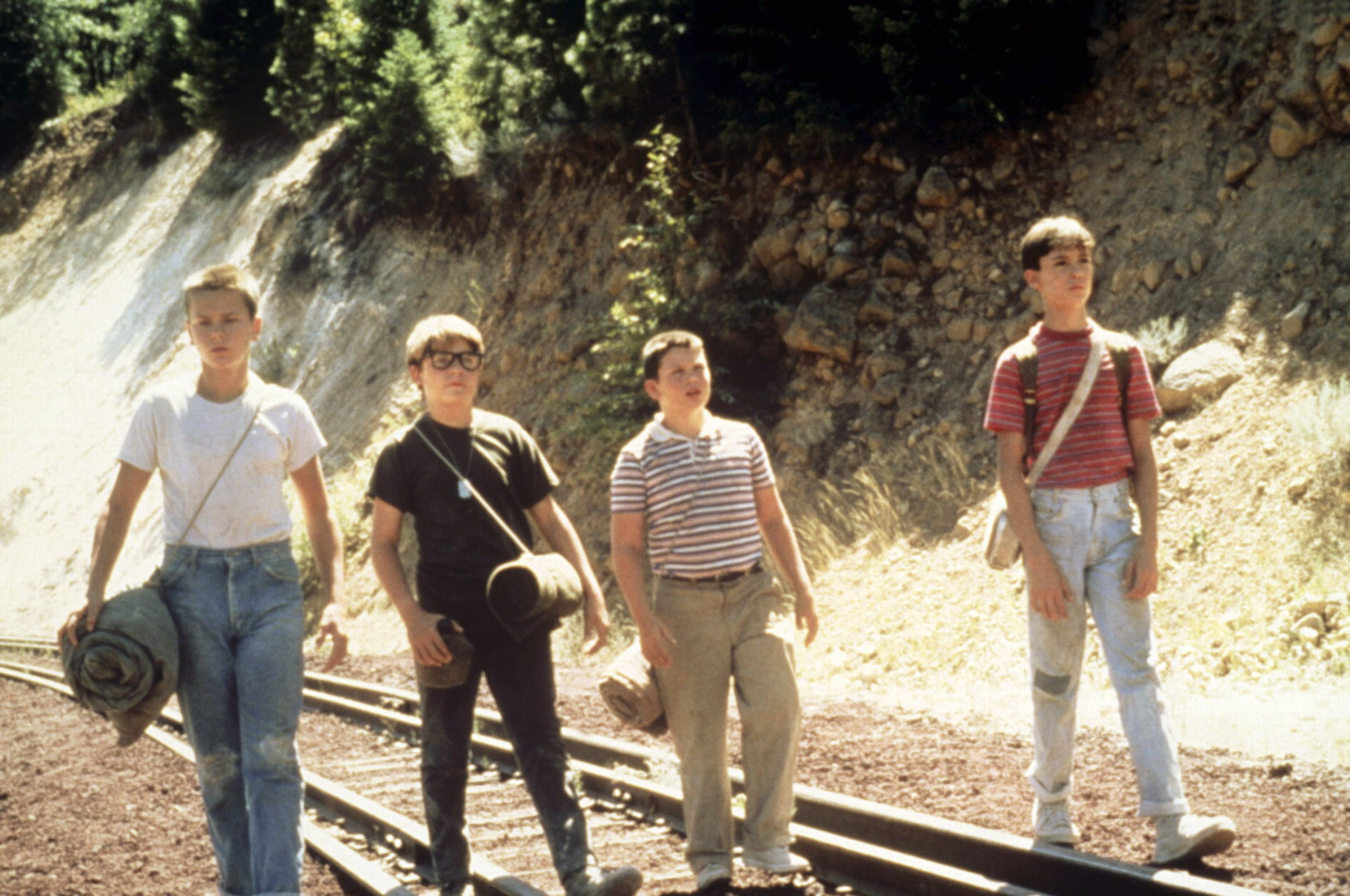 But even as they’re beset on all sides by sadness and tragedy, they still live the way kids live. Reiner brings a nuance to the boys and faithfully captures the distinctive ways that these odd pubescent creatures interact with one another. Bruce Evans and Raynold Gideon’s script nails the wandering-mind banter sessions so common among barely pubescent young men, as they tool on one another in a gesture of affection and fraternity. The friends shoot the breeze about girls (all posturing, naturally) and entertain one another by recounting Castle Rock apocrypha, as in the extended tangent about vengeful projectile-vomiter Lardass Hogan. The director would put his fondness for the oral tradition of storytelling on full display in The Princess Bride one year later, but in Stand by Me, tall tales help add shading to a specific lifestyle.

“We knew exactly who we were, and exactly where we were going,” says Dreyfuss-as-Gordie from the future, his words loaded with sad irony for the youngsters facing a life of unanticipated troubles. (The narrator goes on to note that Chris ended up murdered from a chance encounter and Teddy did a stint in the clink.) That line perfectly encapsulates the two separate sensibilities that combine to make this an enduring account of youth: the headstrong feeling of invincibility endemic to boyhood, as King creeps in the background, dangling their marred futures just out of frame. Stand by Me gets its staying power from its well-measured bittersweet take on the good ol’ days, resulting from the combination of Reiner’s intuitive knack for seeing through a child’s eyes and the writer’s brutal awareness of what comes afterward.

Nostalgia was always the fuel powering this finely-tuned engine, and 30 years out, the movie’s fixation on its own past unsticks it from its period. Yearning to return to purer days, regardless of whether that purity is imagined or not, is the one constant uniting every generation of viewer. (That Stand By Me would celebrate a milestone anniversary at a cultural moment when the mainstream is obsessed with Stranger Things, a TV show set during and steeped in the zeitgeist of the Eighties, is almost too perfect.) That dull ache of remembrance of things past is always a two-part process, conjured first from affection for days gone by, and then from the pain that those golden years are lost forever. By this tack, Stand by Me will be an even sweeter and more melancholy film another decade from now; it’s the rare movie that necessarily gets better with time.

Gordie’s final lines, delivered as an adult putting the finishing touches on a memoir, cuts to the core of it: “I never had any friends later on like the ones I had when I was 12. Jesus, does anyone?” The non-rhetorical answer to his rhetorical question is, of course, no. Nothing could possibly compare to being a kid, tossing pebbles at garbage and chewing the cud with your gang. Once you know what comes next, how could it?

The Last Word: Stephen King on Hillary Clinton, his favorite childhood book and the key to a successful marriage. Watch here.