In a story so absurd that it might be the subject of its own film one day, Sony Pictures Entertainment has been dealing with a weeklong hack that rendered its corporate computers useless and compromised. After the unidentified hackers, dubbed Guardians of Peace or #GOP for short, first infiltrated Sony Pictures’ computer system on November 24th, the collective promised to share files they lifted off the company’s servers. We now know what exactly the hackers grabbed (for now).

According to Gawker, the hack resulted in four films being distributed via Bit Torrent before their theatrical release – Mr. Turner, the addiction drama To Write Love on Her Arms, the Jay Z-produced Annie reboot and Still Alice, featuring Julianne Moore’s Oscar front-running role as a woman diagnosed with early Alzheimer’s – while Brad Pitt’s World War II vehicle Fury was leaked well before its DVD release.

In addition to the film leak, #GOP also claim to be in possession of “A-list actors’ passports, financial data, contract documents, password information and executive emails,” with Angelina Jolie and Jonah Hill among those allegedly affected by the hack. While it’s still unknown who the culprits are, the hack is remarkably personal: The Wrap writes that some of the hacked Sony computers showed “a shocking image of the heads of studio CEO Michael Lynton and co-chairman Amy Pascal on a platter with scales of justice.” 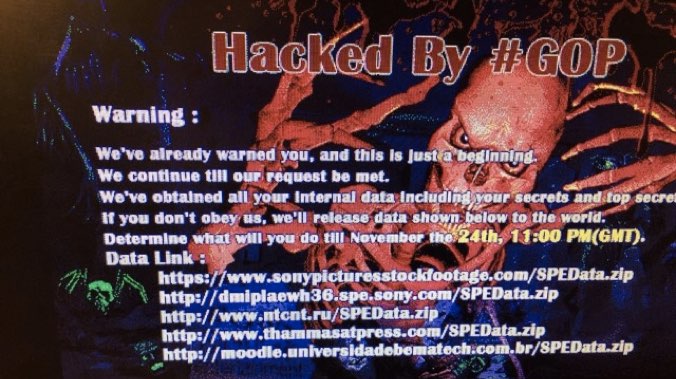 As Hollywood Reporter noted, The FBI has begun an investigation into the leak. “The FBI is working with our interagency partners to investigate the recently reported cyber intrusion at Sony Pictures Entertainment,” the agency said Monday. “The targeting of public and private sector computer networks remains a significant threat, and the FBI will continue to identify, pursue and defeat individuals and groups who pose a threat in cyberspace.”

One knock against the North Korea theory is that The Interview itself wasn’t leaked, but North Korea probably wouldn’t want that film to be freely (albeit illegally) mass distributed in the first place. Variety also discovered that text from a message sent by #GOP is “encoded in a format compatible with Chinese and Korean characters.” Sony Pictures Entertainment told Variety that while no clear link exists presently between the hack and North Korea, the investigation is still underway.