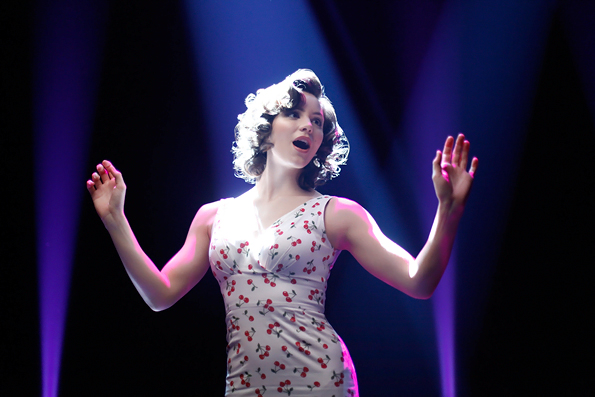 Call it Glee for grown-ups: NBC’s new scripted series Smash peeks behind the Broadway curtain to reveal what it takes (hypothetically) to launch a musical based on the legendary Marilyn Monroe’s life.

The Peacock Network certainly Smash-ed us over the head with an unrelenting advertising campaign. It seemed like everywhere I turned the cast was staring me down. So, whether you tuned in or not, everyone who watches TV, surfs the Web or reads the paper most likely heard of the show before its Monday night premiere.

But in case you’ve been living under a rock, here’s a quick summary of Smash‘s premise: A struggling small-town girl – season 5 American Idol runner-up Katharine McPhee as Karen Cartwright – moves to the Big Apple with dreams of becoming a star. Yes, Glee, your coattails are officially being ridden. Watch your back, Rachel Berry.

The pilot kicks off with Karen basking in the spotlight while singing the classic “Over the Rainbow”—a not-so-subtle reminder of McPhee’s stint on Idol, on which she made a splash (yes, I know, it rhymes with smash) singing the exact same song.

But Karen quickly crashes back to reality when a ringing cell phone ruins her A Star Is Born moment. She’s not really standing on a Broadway stage. She’s actually in a drab room auditioning in front of a panel of less-than-impressed “judges” who’d rather talk on the phone than listen to her sing. Le sigh.

Karen leaves in a huff, unknowingly walking by her soon-to-be competition: Ivy Lynn (played by real-life Broadway babe Megan Hilty), a busty blonde bombshell also auditioning for the unspecified part. Neither gets the role. But they’re set on a path where they’ll soon meet again.

Enter former Will & Grace star Debra Messing as Julia and Tony Award-nominee Christian Borle as Tom, best friends and writing partners. While lounging on a couch and scarfing down mac and cheese trying their hardest to think about anything but the indoor scarf attacking Julia’s neck, the pair dreams up Marilyn: The Musical. And, duh-da-da-dah, they’re off and running with the idea. Easy peasy, right?

Not so fast. Back at Julia’s home, there are hints of trouble in paradise when it’s revealed that she told her hubby she’d take a year off from work to focus all her attention on adopting a baby. It’s a seemingly out-of-place storyline that will most likely either mysteriously disappear over the next couple of episodes or become an area of contention between the couple for the duration of the season. (Please, let it be the former.)

Either way, Julia has already made up her mind: She’s not letting Marilyn: The Musical pass her by. She and Tom soon pluck experienced chorus girl Ivy from ensemble obscurity to prime her for stardom, and they start churning out ideas like including a “baseball number,” titled “The National Pastime,” focusing on Ms. Monroe’s marriage to the Yankees’ Joe DiMaggio. It turns out to be one of the most memorable performances in the premiere (particularly when it comes to original tunes) with references to “peanuts” and “hot dogs” as Ivy does her best Marilyn impression while stroking baseball bats and humping dancers donning uniforms.

When a video of Ivy rehearsing an unfinished song hits “YouLenz” – a terribly named YouTube knock-off (and the same fictional video site from the Law & Order universe) – creators Julia and Tom freak out thinking their unpolished product will be ripped to shreds a la Spider-Man: Turn off the Dark. To their surprise, it’s labeled a “smash” – you know, just in case you have an attention span of a hamster and had somehow forgotten the name of the series.

Enter Oscar-winning actress Anjelica Huston as Eileen, a tenacious Broadway producer going through a messy divorce from her husband-slash-business partner. Determined to prove she’s still relevant, she aggressively inserts herself into Julia and Tom’s project. And she knows just the director to bring onboard – Tom’s archenemy, Derek (English actor Jack Davenport). That won’t prove to be a problem somewhere down the road, will it? Nah.

When auditions to cast the lead roll around, Karen and Ivy once again cross paths. The age-old battle of the dark-haired girl-next-door versus the fair-haired sexpot is officially on.

In a sea of women mimicking Marilyn, Karen is deemed “refreshing” because of her frumpy clothes and unbleached locks. Karen – and McPhee herself – shine during her rendition of Christina Aguilera’s “Beautiful.” I never thought I’d say this, but the more McPhee the better, if you ask me. She has a doe-eyed likability that gives the show some warmth.

And the panel of Great White Way judges agrees. Her Plain Jane pipes raise eyebrows and turn frowns upside down in the audition room, nabbing her a callback. Phew, didn’t see that coming, what with her being the series’ star and all!

While co-writer Tom thinks Ivy should be a shoo-in for the role, his frenemy Derek is gunning for Karen . . . in more ways than one. She gets a late-night text from the director, asking her to meet him at his apartment – which she dumbly does. If she had taken the time to Google the term “casting couch” she would’ve known what to expect next. (Don’t be shy, you can Google it too.)

After discussing how she may not be sexy enough to play the original blonde bombshell, Derek creepily asks Karen to show him “what she’s got.” She runs into the bathroom a “scared bird” ready to cry but emerges a confident swan wearing nothing but one of his white button-down shirts while singing a breathy rendition of “Happy Birthday.”

He wanted sex and he got it – well, not exactly. Despite straddling him, she won’t give up the goods. Instead she storms off when he leans in for a kiss. Sorry, Mr. Director.

When her callback audition rolls around, though, the experience seems to have rubbed off on her, as she puts more effort into looking the part by slipping into a form-fitting, cherry-patterned dress. But, of course, Ivy also goes out of her way to get all dolled up. It’s clearly time for a musical theater version of a smackdown.

Both women own the audition room by belting out a tune called “Let Me Be Your Star.” But we’re left wondering who will be picked to play Marilyn. Call it a hunch, but I have a feeling we’ll find out in the coming weeks . . .