When Quentin Tarantino’s brilliant, groundbreaking Pulp Fiction was released twenty years ago, Joseph Gordon-Levitt was the 13-year-old star of the Disney sports comedy Angels in the Outfield. Last night, he starred in a live reading of Pulp Fiction as Vincent Vega (John Travolta’s character), effectively getting a do-over on 1994.

The Film Independent at LACMA Live Read, now in its third season of unrehearsed public performances of classic screenplays with new actors, was founded by Jason Reitman, who has stepped aside in recent months in favor of a sequence of guest directors. Last night’s director was Evan Goldberg (This Is the End), who told the audience that watching Pulp Fiction as a kid in Canada with his pal Seth Rogen “is literally what got us into film.”

Rogen showed up, of course, contributing a memorable portrayal of Lance (originated by Eric Stolz) as a hyperactive stoner. Jonah Hill gave a low-key but effective reading of Butch (Bruce Willis’s part). Lizzy Caplan had strong performances both as a sultry Mia (Uma Thurman) and a demented Honey Bunny (Amanda Plummer). Michael Chiklis took on The Wolf (Harvey Keitel) and Captain Koons (Christopher Walken), but really impressed by fully committing to a snuffly, cringing interpretation of Brett (the short-lived character originated by Frank Whaley, as in “Check out the big brain on Brett!”). Wendell Pierce was quietly menacing as Marsellus Wallace (Ving Rhames), Rebecca Romijn did a nice job with two different accents in playing the French Fabienne (Maria de Medeiros) and the Colombian Esmarelda Villalobos (Angela Jones), and Nick Kroll wrung every bit of comedy available out of a variety of small characters, including accidental shooting victim Marvin (Phil LaMarr). 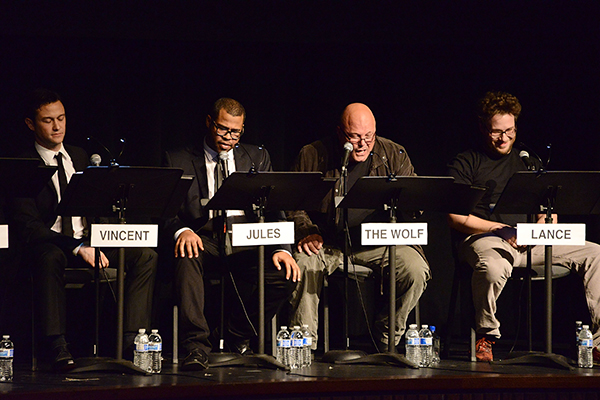 Best of all, however, was Jordan Peele’s nuanced interpretation of Jules Winnfield (originated by Samuel L. Jackson). Jules consistently has Pulp Fiction‘s funniest lines, and in the tradition of the Shakespearean fool, is also the script’s moral center. Peele gave a very different performance than Jackson, heavier on the humor than the menace, but executed the pivot to religious enlightenment just as convincingly.

For the most part, the extremely strong cast found new paths through Tarantino’s screenplay, but at a few key moments they couldn’t resist the temptation to lapse into mimicry: Caplan, for example, copied Plummer’s take on the climactic “Any of you fucking pricks move and I’ll execute every last one of ya!” Chiklis did a perfect impression of Walken for the final lines of his monologue about the gold watch, appearing to make Rogen cry with laughter. When it came time for the dance contest at Jack Rabbit Slim’s, Gordon-Levitt and Caplan rose from their chairs; while Chuck Berry played, they charmingly imitated the moves of Travolta and Thurman.

The actors appeared to be working off the shooting version of the script, meaning that some familiar scenes ran longer; in addition, Goldberg was reading the stage directions, revealing both that Tarantino is a compulsive joker and that some of his original music choices changed. Or in the case of the line “Sodomy and the Judds can still be heard,” both.

Two decades on, the looping timelines and perilous situations of Pulp Fiction are familiar rather than shocking. But the script has always been chockablock with great jokes, which got big laughs last night from an audience that had certainly heard them before: Tarantino has said that his inspiration for the banter shared by Jules and Vincent was the dynamic between Jerry and George on Seinfeld. “Sewer rat may taste like pumpkin pie,” Jules tells Vincent, “but I’d never know because I wouldn’t eat the filthy motherfucker.” Last night’s Pulp Fiction tapped into that wellspring of inspiration and played as one of the greatest screwball comedies ever.