“Tragedy has a way of bringing people back together,” Emily tells Daniel as she leaves the Grayson family’s celebration of Victoria’s return from hiding. I’m sure she really meant, “craven scheming for money, power and retribution” when she said “tragedy,” but that would have confused the poor boy. We’re only two episodes in, and all the main characters are already locked into tenuous alliances based on mutual distrust, hatred and fear, and that’s just how Jack and Amanda felt after they got the paternity test results.

I started this episode uncertain whether I thought Victoria or Conrad was the most evil, but the relish with which Conrad agreed to beat up Victoria to create a plausible kidnapping and ransom story put him way over the top. I know it’s fiction and makeup, ABC, but that looked like a vicious beating, and she literally asked for it. It was gross and disturbing and exactly the sort of thing Nolan meant when he told Emily she “shouldn’t fall asleep watching horror movies.” 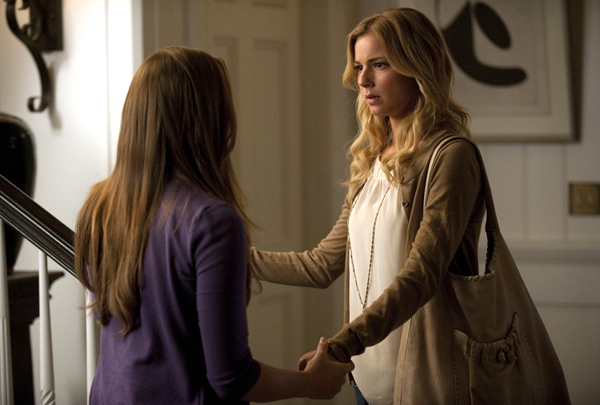 Emily’s plan to get Charlotte away from Victoria didn’t seem to have more steps than these: 1. Make Victoria be cruel to Charlotte. 2. . . . 3. Charlotte starts a new life as the Stowaway’s au pair, so it’s not surprising that Victoria managed (or had planned all along?) to use her daughter’s escape and sudden poverty as the key back to the world of the living and scheming. You just know she spent days trying to think up the exact wording of that phone call to Conrad. Too kind and he’d think it was a hoax. “Should I haunt him? Stalk him? Is his life miserable or pathetic? Why didn’t I ask the White-Haired Man to bring a thesaurus when he brought the passports?”

Whether it’s because she’s focused on finding her mother or because she’s simply in too deep, Emily really seems to be missing that special spark that made her such a badass in the first season. Emily’s balancing act is clearly overwhelming her. The feuds that began thanks to her original mission have now spawned demonic baby feuds over which she has no control, which means she’s spending too much time minimizing collateral damage and not enough time strategizing. She can give Charlotte a sister and a nephew, but it’s not her real family. She can offer to doctor Amanda’s paternity test, but she knows there’s no way to get rid of her and the baby without destroying Jack. Two episodes in, it looks like Takeda and revenge ninja/Grayson Global shareholder representative Aiden are right about Emily’s loss of focus and the danger it poses, both to her and to those she loves.

Jack and Declan continue to suffer as only the television working class can: that is, fashionably. Declan will soon be supplementing his income with a lucrative side gig as an accessory to grand larceny, something I’m sure he will be eager to put on his college applications. Why so trusting of Trey Chandler from study hall, Declan? Today it’s holding onto a stolen bracelet, a month from now it’ll be underground human gladiator matches against unemployed fishermen.

I hope Emily is paying for Amanda’s pre-natal visits, because something tells me the Porters don’t have good health insurance. After planting the seeds of doubt in Jack, Emily did do some form of good thing by agreeing to doctor Amanda’s paternity test results. She then promptly undermined it by lying and telling Amanda the baby isn’t Jack’s. Nolan is right; it’s a dark, dark move, even for Emily. They’re both keeping secrets, but Amanda isn’t playing for the same stakes. “You’re with the man I love” is fodder for mean girls in Capeside or Beverly Hills. Don’t toy with her for sport. Or maybe messing with poor people is a sport? I’ve never been to the Hamptons.

It seems like the best way to stay safe from revenge blowback is to actually get involved in the game, which is why Charlotte looks like she’s going to be a much more interesting character this season. Most teenagers think their parents are out to ruin their lives, but actually being able to prove it must be as liberating as inheriting a ton of money, which she also did by the end of this episode. Way to be a big brother on that one, Daniel, even if it means you’re now destitute but for the income you get from your father’s obviously failing and fraudulently run company.

Daniel seems poised to become the virtuous scion of the hedge-fund dynasty (in case you were still confused, this show is not based in any recognizable reality) and definitely wants to keep his corner of the show’s love rhombus. He still doesn’t seem like the brightest mind Harvard Business School ever produced (and that’s saying something), but his reignited hatred of his father over Charlotte’s gaslighting and his interest in Grayson Global’s finances could make him a valuable real world ally (or pawn) for Emily. Revelations and confrontations are happening so fast that I wouldn’t be surprised if Daniel discovers that Ashley has been spying on him for Conrad within the first few minutes of Episode Three.

As the web of conspirators and nemeses grows on the Grayson side, Emily and Nolan are once again splitting up. Nolan is still an unstoppable quip machine – bon mots like “white-haired Manibal Lecter” and “Doctor Doom’s Sober House” don’t grow on trees! – but he can’t deal with his company’s impending audit and a hot-when-she-takes-off-the-glasses accounting analyst without taking his eyes off the Clam Cam for long enough to miss the Conrad-Victoria beating. He’s right to be mad at Emily for treating him like her “fashionably dressed, technologically savvy sidekick,” but the friendship between them is the best thing about the show, and I really wanted them to have movie nights in the beach house. They would have had so much fun critiquing Charles Bronson’s form in the Death Wish movies.

It’s obvious that Nolan the sexy geek has to make way for Aiden the sexy revenge ninja, but that doesn’t mean it’s a good thing. Why? Let’s start with the fact that he’s now saved Emily’s life twice in two episodes. This is Emily Thorne, a woman who has plotted and trained for close to a decade to be able to fight her enemies, and she’s really gone this soft this fast? Making Emily less of a cipher and more vulnerable and giving her some peers are both excellent ideas, but she doesn’t need to go damsel-in-distress to achieve both goals. She should kick Aiden’s ass next week to keep things even.

My skepticism about Aiden doesn’t make the last minute of tonight’s show any less thrilling. Was she baiting him, as Nolan joked earlier? Whenever she has a chance to get information about her mother’s disappearance and whereabouts, she can’t think straight, which makes her vulnerable, which meant Aiden had to swoop in and take the kill shot. But what comes next? If the White-Haired Man had felt the need to unburden himself to Emily before killing her, couldn’t he have told her where he took her mother? He didn’t give her any information she didn’t already have.

Another Grayson goon is dead at the hands of one of Emily’s friends, and it’s time to find her mother. What are the secrets she’s been keeping for 20 years, and what will happen when she and Emily are reunited? Will things not be all they appear? (Yes.) Will Emily’s mother finally exonerate her father? (No, or at least not yet.) Will more intrigue ensue? (Almost certainly.)

Previously: A Meeting With Destiny