'Raiders!': How Two Kids Made the Greatest Fan Film Ever - Rolling Stone
×
×

While other 11-year-olds in Biloxi, Mississippi might have spent their 1980s summer vacations playing endless hours of Space Invaders at the local arcade or tricking dimwits into painting picket fences, Chris Strompolos and Eric Zala, the subjects of the new documentary Raiders!: The Story of the Greatest Fan Film Ever Made (opening June 17th), were busy lighting each other on fire.

The two boys first saw Raiders of the Lost Ark in the summer of 1981, and like any right-minded latchkey kids in search of adventure (and father figures), they instantly fell in love. The duo returned again and again, until they could recite the script like the Pledge of Allegiance; they even tried to sneak in a video camera during the movie’s 1982 rerelease to surreptitiously tape the picture. (An usher caught Strompolos red-handed and gave him the heave-ho — but Zala successfully pulled off the junior piracy.) They had allowed Indiana Jones to absorb them so fully that the only step left to take was to become Indiana Jones.

After 30 Years, 'Raiders of the Lost Ark' Devotees Finish Adaptation

With the combination of single-minded passion; and guileless youthful determination, the boys enlisted their pal Jayson Lamb and set off on a quest to scrupulously remake Raiders of the Lost Ark one shot at a time. Working from a budget of whatever was around, unencumbered by parental supervision, the power trio spent seven summers recreating everything from the snake pit scene to the face-melting opening of the Ark. Uncooperative seamen, burns of varying degrees, no less than five different mock-up boulders and a host of other setbacks stood in their way. But the pint-size autodidacts kept soldiering on. “The great thing about remaking an established film is that it holds your feet to the fire,” Strompolos says. “You can’t just remove that boulder scene because it’s difficult. It held up a target to hit. First two years in, we’re filming and it was terrible. But we kept on reshooting certain scenes over and over again, and we picked up things about shot composition, lighting, blocking. That was our film school on the fly.”

Incredibly, they made it work … almost. The end result, eventually known as Raiders of the Lost Ark: The Adaptation, was missing one key scene: Indy fighting the Nazi heavy near the rotating blades of a fighter plane. (Spare disposable aircrafts, it seems, were in short supply for hooligan Biloxi teens.) But the trio printed what they had to a videocassette anyway. Somehow, the tape started making the underground movie-fanatic circuit, making fans of Eli Roth and Ain’t It Cool Newsfounder Harry Knowles, who included it as part of his annual Butt-Numb-a-Thon event in Austin. The screening turned it into a sensation, and word-of-mouth buzz soon created a devoted following around the fan film; they even received affirmation directly from the mouth of God, when Spielberg himself told them how much it delighted him. Without realizing it, they had created their own Lost Ark of the Covenant, an elusive artifact spoken about in reverent whispers by devout nerds. 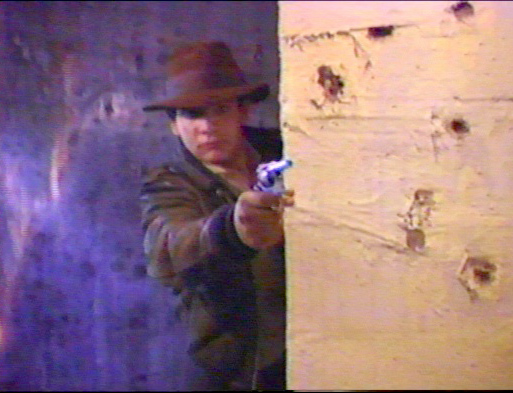 One such nerd was Jeremy Coon, who caught the unauthorized remake at a children’s film festival in 2013 and immediately recognized a stranger-than-fiction narrative. “Fifteen minutes in,” Coon says, “I turned to the friend next to me and said, ‘Someone’s got to do a documentary on this. I hope it’s me.’ I had so many questions: how they got the fire in the bar, where their parents were, who got injured doing this.” Coon approached Strompolos after the screening and asked him to grab a bite, over which he pitched the possibility of a documentary chronicling their odd odyssey. Other filmmakers had pitched them before, but as Strompolos tells it, “Jeremy struck us as someone who could cross the finish line. He could tell our story. We just had a good feeling.”

And though Coon and his co-director Tim Skousen had access to the Betamax tapes from the guys’ archives, they’d were about to get new material to work with as well. A Kickstarter campaign had raised just enough for a seven-day shoot to finally nail that missing scene — only this time, a documentary crew was there capturing every tense phone call and thwarted opportunity. Toggling between vintage video footage and the now-adult Stromopolos and Zala scrambling to recreate the set piece, Raiders! eventually doubles as both a look back at a folly-of-youth passion project — a sort of DIY filmmaking version of Boyhood — and a portrait of obsession, as the guys emptied their bank accounts, enlisted their friends, and endangered their lives for this labor of love.

It also captures how ahead of their time these kids were in terms of fandom reclamation run amuck. But unlike today’s era of diehards flying into a rage at the news of nostalgic favorites getting rebooted, the documentary underscores how the boys’ adaptation approaches Indy’s first ride with both reverence and a willingness to make something one’s on.”Fandom has grown into a nuanced world,” Strompolos says, “where some fans have a sense of entitlement over the content. It’s okay to take content and reinvent it, but it’s not a dictatorship. I think that’s the wonderful thing about being a fan, that the work can mutate and migrate and transform in a positive way.”

That any of this exists at all — the completed remake or the documentary celebrating it — counts as a victory for the original Mississippi crew and the small but dedicated fanbase they’ve earned. Strompolos, now a full-time showbiz professional, is well aware of the chord his life’s work has struck with the public. “It’s got a universal energy to it,” he says. “It might sound a little cliché, but this really has a lot to do with friendships, putting your mind to something when you want it bad enough, working hard, facing adversity, never giving up, these classic themes that people get used to saying very easily. I think our story really embodies that.”

“There’s a tremendous sense of love behind what they did,” Coon says. “As adults, there’s something about harkening back to childhood that reminds you of a time in your life when you were that passionate about something. To see that represented onscreen, the sincerity hits you right in the heart.”