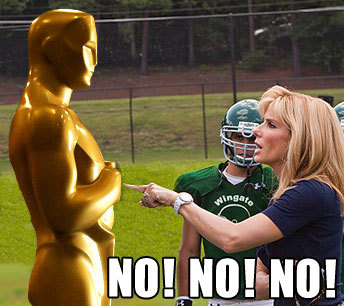 Yesterday, in my Oscar predictions blog, I feared the worst and begged the Academy not to give a spot among the 10 nominees for Best Picture to The Blind Side, a football family drama of more than usual puking sentimentality. So, of course, the Academy put it right in contention, along with nine rather reasonable choices (Avatar, District 9, An Education, The Hurt Locker, Inglourious Basterds, Precious, A Serious Man, Up and Up in the Air). Why The Blind Side wasn’t replaced by something serious (The Messenger), stylish (Star Trek), hilarious (The Hangover), romantic ((500) Days of Summer), innovative (Where the Wild Things Are), Clint-ish (Invictus) or just plain not brain-dead, I can’t tell you. You tell me. What movie would you put in the spot unfairly occupied by The Blind Side?

Peter Travers unleashes his anger at The Blind Side‘s nomination in a special edition of “Damn You, Hollywood!”

I can tell you that I predicted 50 of the 60 nominations in 11 major categories yesterday, which is at least respectable. I thought the Academy would never have the smarts to nominate The Messenger and In the Loop for screenplay Oscars. They did. The ACE editors union ignored Sally Menke’s glorious work on Inglourious Basterds, the Academy did not. Bravo!

But the virtual disdain for indie cinema in most of the major categories is still galling. Act in a foreign language — Catalina Saavedra (The Maid), Yolande Moreau (*Séraphine*) é and you might as well turn blue. Oh wait, that’ll get you everywhere. With nine nominations each, Avatar and The Hurt Locker will go to battle as equals. Oscar must decide to go with quality in the form of an Iraq war movie that didn’t make a dime or a war of the future movie in 3-D that made more money than anything. One guess where the wind’s blowing.