“I had a couple before, to settle myself,” says Michael Ware, sipping a beer at an Irish pub in Manhattan. It’s just after 3 p.m. on a Friday and the bar is lined with haggard-looking figures. Ware, who spent seven years covering the war in Iraq for Time and CNN, fits right in. His dark-blue sweater has a bullet-size hole in the chest. Black slacks cover the leg wounds he suffered during his sixth IED attack, and he still has the scruffy beard that one soldier referred to as Ware’s “four-o’clock-the-next-day shadow.” Desmond Garrison, a cameraman who worked with Ware in Iraq, joins him today at the bar. “When I first met Michael, in the spring of ’07, he was relatively stable,” Garrison says. “By the fall, he was spending more and more time alone in his room.”

Forget What We Know Now: We Knew Then the Iraq War Was a Joke

Ware is in New York for the HBO premiere of Only the Dead See the End of War, his first documentary. The film traces Ware’s time in Iraq, and is told almost entirely through footage Ware shot on a handheld camera, accompanied by his haunted narration. (“Certain dark chambers of the heart, once opened, can never be closed again…”)

Ware’s camera captured the aftermath of car bombings and the invasion of Fallujah, as we see him telling his then-22-month-old son that he loves him before joining one of the first three trucks into the city. He was there for the bombing of the Jordanian Embassy in 2003, which Ware describes as the first-ever attack by ISIS, before we knew it by that name.

But the film is less a historical account than an inside look at one man’s struggle to understand his experience of war. Only the Dead See the End of War (the title comes from a line by author George Santayana) climaxes with the death of an Iraqi boy shot by American soldiers. As the boy gasps on the ground and the soldiers discuss how, and whether, to help him (they don’t), Ware, too, stands idly by with his camera. That moment, more than any other, has haunted him. “This is a film that happens to be set in Iraq,” Ware says. “But at its highest, I’d like to think it’s really about us – the nature of us.”

Ware, 47, grew up in Brisbane, on Australia’s east coast. After playing rugby professionally – an experience that left his nose tilted permanently to the left – and attending law school, he landed a reporting job at one of Rupert Murdoch’s Australian newspapers. He joined Time as a correspondent in 2000, and after 9/11, the magazine sent Ware to Afghanistan. In 2003, he went to Iraq to cover the invasion, a period he calls the “Summer of Love.” (At one point, Ware had a romance with 60 Minutes reporter Lara Logan that spilled into the tabloids.) “There were so many journalists in Baghdad, you almost literally couldn’t get a hotel room,” Ware remembers.

But as suicide bombings and kidnappings picked up, the press corps dwindled, and Ware began to earn a reputation as one of the most intrepid – you might say foolhardy – Western reporters. In 2004, while looking into insurgent leader Abu Musab al-Zarqawi’s rise to power, Ware was dragged into the street by militants, whom he says intended to execute him until another Iraqi persuaded them to let him go. Later, al-Zarqawi tried to kidnap Ware, but instead nabbed “the wrong six-foot Australian.” If the people Ware was covering weren’t wearing body armor, Ware didn’t, either. If a soldier charged through a door, he went in, too. “How can you tell their story unless you take their risks?” Ware says. “In war, everyone fucking lies to you, and unless you are there to personally see and experience it, everything else is secondhand.”

In 2006, Ware left Time for CNN. “I could write 10 words in print and those 10 words would sink like a stone,” he says. “But then I would go on TV and repeat those same words verbatim, and the secretary of defense would virtually have to respond to those 10 words the next day.” On CNN, he promptly became a thorn in the side of both the Bush and Obama administrations. In 2007, when John McCain claimed that Baghdad was safe enough for Gen. David Petraeus to drive around in an unarmed Humvee, Ware went on the air and directly refuted McCain’s claims. “To suggest that there’s any neighborhood in this city where an American can walk freely is beyond ludicrous,” Ware said. “I’d love Senator McCain to tell me where that neighborhood is, and he and I can go for a stroll.”

Despite the danger, Ware couldn’t imagine being anywhere else. “It was the most extraordinary of times, a hyperlife,” he says. His son was conceived on leave in Australia after Operation Anaconda, but Ware saw little of him during the next seven years. He had trouble accepting rotations out of the conflict zone, save for a brief three weeks covering rugby’s World Cup. “The war became my new normal,” he says. “I didn’t know how to exist beyond that.” 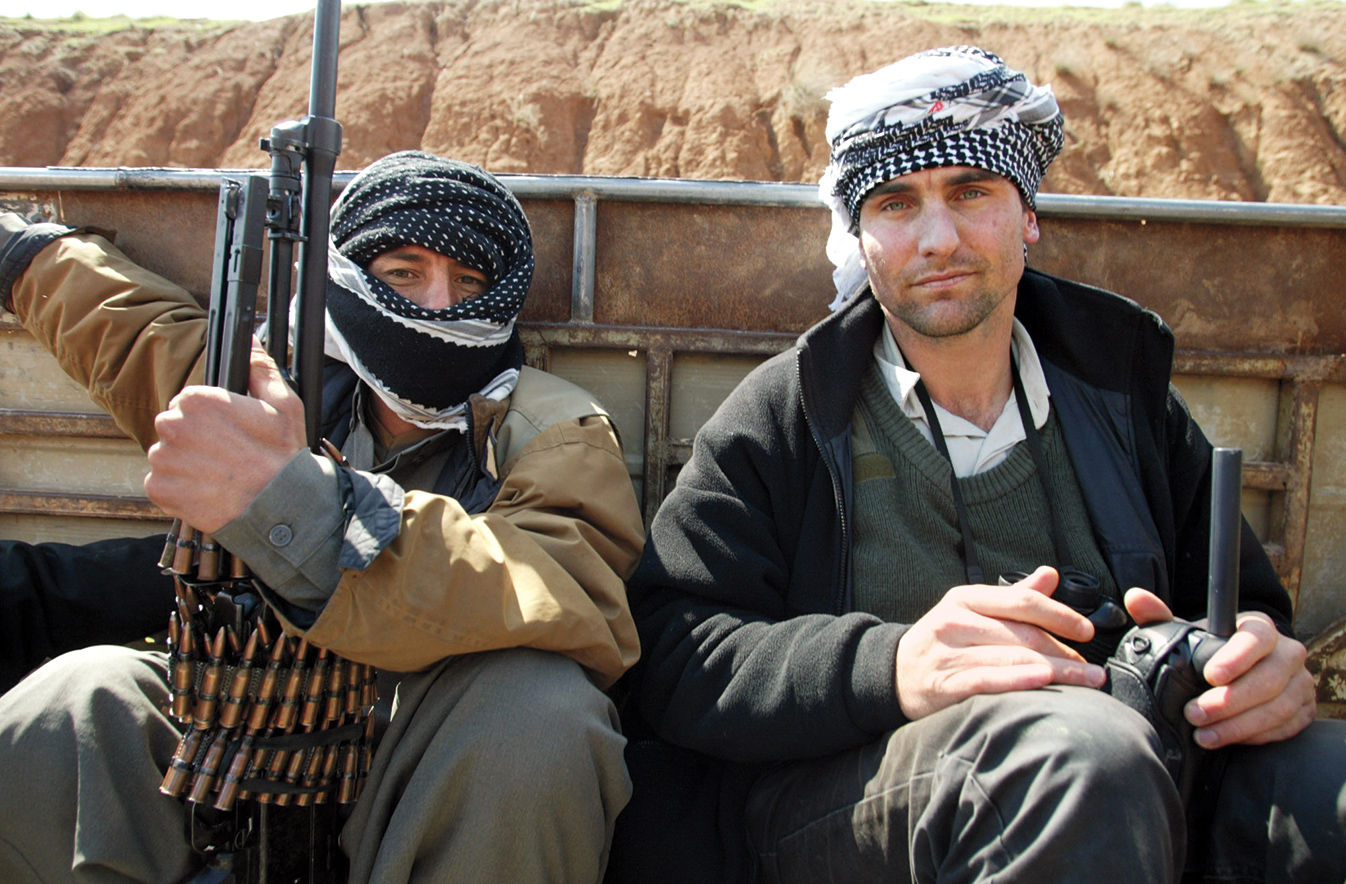 By 2009, however, another IED attack debilitated Ware’s senses of smell and taste – “I get too salty, too sweet, and that’s about it” – and he soon realized he had to get out. He moved to Brooklyn, but found himself unable to walk to the corner store, much less work on the book he had a contract to write. He took assignments from CNN that sent him back to conflict zones. Eventually, he went on leave from CNN, citing post-traumatic stress disorder, and never went back. “That’s when I started watching the tapes,” Ware says.

In 2003, an American photographer traveling with Ware bought a hand-held camcorder on the black market and suggested Ware start filming what he saw. At first, Ware just used the footage as a kind of extra reporter’s notebook. “Did the IED come first? Or were we hit by small-arms fire first?” he says. “I can’t remember, but the camera could.” When he left Iraq, Ware brought home a Tupperware container full of MiniDV tapes, which he couldn’t look at for years. Eventually, a friend who worked as a film editor watched them and told Ware he was sitting on a documentary. “Over seven years of tape, there’s no one soldier, no one Iraqi who will take you from beginning to end,” Ware says. “The only continuum was me and the camera.”

For a time, Ware avoided the news out of Iraq, but he has since reimmersed himself. He’s especially critical of the presidential candidates’ plans, or lack of them, to deal with ISIS. “Every candidate’s policy is to have no policy,” he says. He also believes Americans are just now starting to process the War on Terror. “That conversation is truly beginning – the cultural conversation,” he says. All Quiet on the Western Front was published a decade after World War I, and though troops pulled out of Vietnam in 1973, it wasn’t until The Deer Hunter and Apocalypse Now in the late 1970s, and Platoon and Full Metal Jacket in the 1980s, that the public truly began to grapple with Vietnam. “In film and TV, we can’t do it while the conflicts are still underway,” he says.

Ware notes that there have been good movies about Iraq – The Hurt Locker won the Best Picture Oscar in 2008, and American Sniper is the highest-grossing war movie of all time – but says Hollywood has managed only to tell narrow stories about the experience in Iraq. “There’s only one war story: War is hell,” Ware says. “But within that, there are a lot of stories to tell – they’re funny, they’re sad, they’re horrific, they’re wonderful.” On the same day Ware sat drinking in Manhattan, Whiskey Tango Foxtrot, a romantic comedy starring Tina Fey as a journalist who finds herself as a war correspondent, had just opened. Vin Diesel, Jennifer Aniston and Henry Cavill are all slated to star in Iraq War movies, and Steven Spielberg is directing Jennifer Lawrence in a film about war photographer Lynsey Addario. “We’re starting to see Hollywood catch up on the conversation we’ve always needed to have – about healing, about pain, about the homecoming of our vets,” Ware says.

Ware remains scarred by his experience. “I don’t regret a single moment, but I’ll never stop paying for it,” he says. Yet he’s also begun putting his life back together. He has a second child, with a new partner, and lives in Australia, where he helps coach his son’s rugby team. He has spent considerable effort trying to get members of his “Iraqi family” out of the country as refugees.

When Ware leaves New York, he’ll stop in South Carolina to visit a military buddy, then head to Hollywood, where he’s planning to pitch an idea he hopes will come close to telling the full human story in a way that Americans will engage. “We need a modern M*A*S*H,” Ware says. “I’d love to make rom-coms.” He believes there’s room to laugh – in Only the Dead, Ware and a photographer joke about buying property in Ramadi while the real-estate market is depressed – while being deeply serious. “My whole reason for existence was to translate the experience of Iraq to people back home,” Ware says. “In Australia, we call it ‘pissing in the wind.’ Whether it’s heard or not, you still have to scream.”