“We made this in the spirit of lighthearted fun,” Daryl Hannah said, staring out into crowd packed in to Austin’s Paramount Theater. “So we hope you can relax your brains.” A mellowed-out frontal lobe is pretty much a prerequisite for Paradox, the actor-turned-filmmaker’s free-form collaboration with boyfriend Neil Young and his backing band Promise of the Real that the couple premiered at SXSW last night. Shot on both Super 8 and on Hannah’s phone over four days in the Rockies between tour dates (and while everybody adjusted to the high altitude), it’s a funny, trippy homemade project that’s part performance movie and part pleasantly buzzed daydream. You could dig through its pastoral images and pulp-Western playin’ around for messages if you wanted, but essentially, it’s an off-hours riff designed to channel Young’s opening line from Tonight’s the Night‘s “Speakin’ Out”: “I went to the movie the other night/The plot was groovy, it was out of sight.”

Not that typical A-to-B story mechanics are a big concern here – “We like to say we’re more pot than plot,” Hannah notes, which in a perfect world be the tagline on the poster. This is pure jam-session cinema, very let’s-hit-record-and-see-what-happens. Set “many months ago, in the future,” Paradox follows a gang of cowboys holed up in the hills, searching for relics of the past. They’ve got names like Jail Time and the Particle Kid; the de facto leader is Young’s Man in the Black Hat, who’s prone to wander the snowy plains and play guitar when he’s not keeping folks in line with a serious don’t-fuck-with-me glare. (“Whatever you do, don’t let him get that stare on ya,” one character says, undoubtedly sound advice regarding the real-life Young as well.) Everybody mostly sits around, talking trash and quoting Nietzsche while Neil noodles away on an acoustic six-string. Occasionally, a Greek chorus sitting in a His ‘n’ His outhouse will offer up platitudes like, “Love is like a fart: If you gotta force it, it’s probably shit.” Willie Nelson shows up in gunslinger gear and helps the Man rob a bank. Naturally, it’s a Seed Bank.

There are shots of shooting stars and Northern lights and deer roaming through pastoral settings, punctuated by the occasional chapter titles like “II. It’s time to feed the good wolf …” and “III. Waiting on the Silver Eagle …” But it’s the musical sequences that make Paradox achieve lift-off here, and we mean that literally. “Music still helped our spirits fly,” a voiceover declares, at which point Neil and the Promise gents retire to a revival tent in the middle of, as everybody knows, nowhere. They tentatively kick in to a version of the title track off of 2016’s Peace Trail (Hannah mentioned that this was the first time they’d played the song together; she just rushed over and started filming them as quick as she could). Outlaws begin tying themselves to posts with ropes. And once the song kicks in, the observers begin to float, buoyed by the band’s ragged, beautiful take.

This is the one recurring image that the movie revolves around, a stunning visual that Hannah uses again during a live performance of the band doing an extended, Crazy Horse-style jam out of “Cowgirls in the Sand” and, in a truly transcendent moment, Hannah herself floating behind Young like a kite as he strums a mandolin. There’s also an elegiac “Pocahontas” sung by Neil’s face superimposed over the moon, an impromptu campfire cover of Willie’s “Angel Flying Too Close to the Ground” (Nelson’s sons Micah and Lukas front Promise of the Real), a soft-shoe done to the boys crooning the Turtles’ “Happy Together” and lots of interludes that suggest outtakes from the frontier-feedback soundtrack of Dead Man. A cynic might chalk it all up to cowboy cosplay. But if Lemonade is a visual album, then this is a visual mix-tape: a collection of oddball moments and favorite cuts and off-the-cuff brilliance set to a stream-of-consciousness flow. 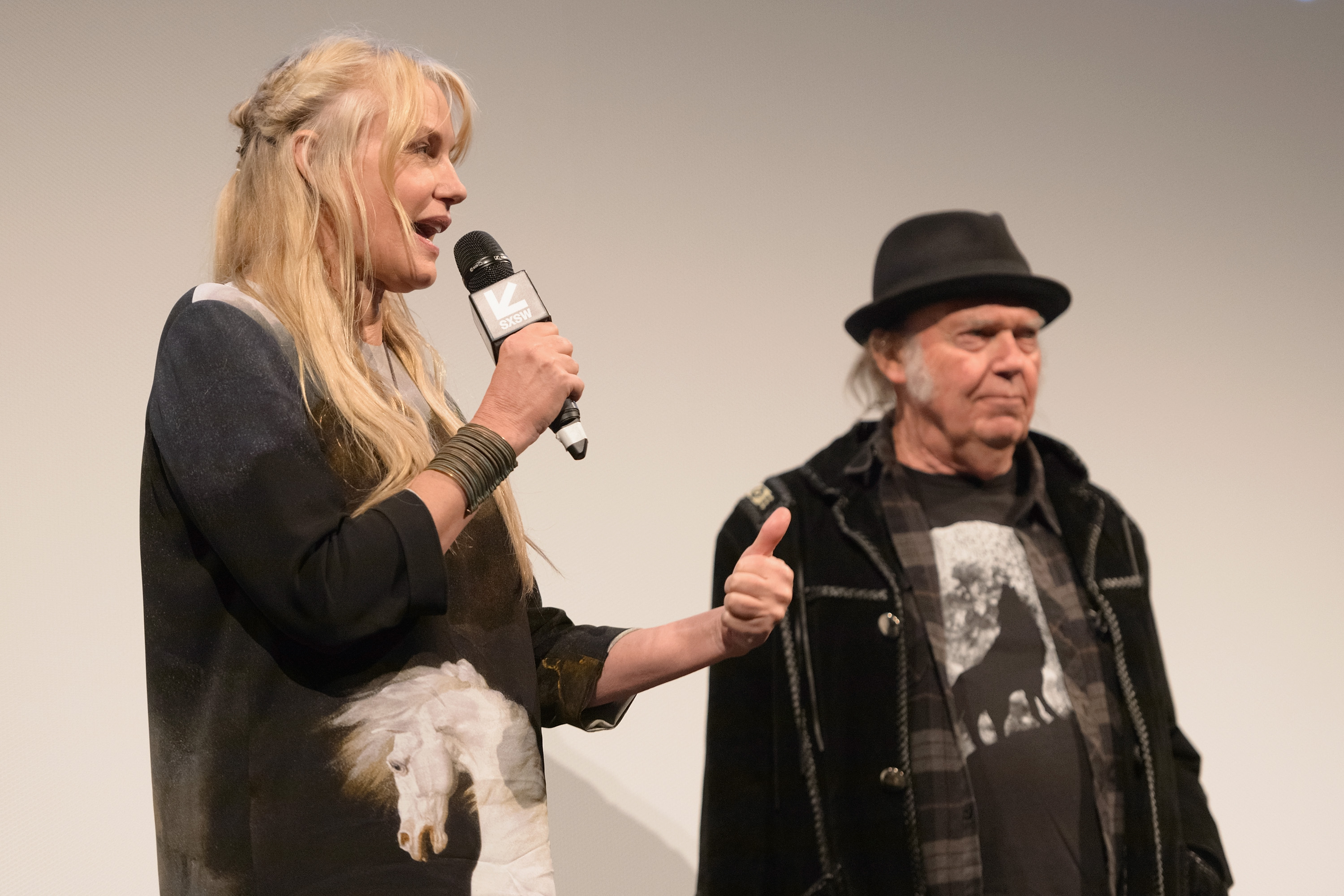 The whole shebang is one lovely lark, “a labor of love,” Young said during the postscreening Q&A. “Well … not a lot of labor.” The rock star was in fine wisecracking form, joking that the soundtrack was “probably coming out 26 minutes from now” (it’s out March 23rd, the same day that Netflix will begin streaming the movie, FYI) and pretending to take a call. “Bernard Shakey is on the phone,” he told the audience, referring to the directorial pseudonym he used for 1982’s Human Highway and 2003’s Greendale, both distant cousins to Paradox. “That’s a piece of wood,” Hannah replied. No less than two fans told Young that their fathers were so excited that they were asking him questions. One woman kept thanking him for his music. Everyone seemed stoked to simply be there.

“I’d like to make a real movie some day,” Hannah said, and as the folks onstage and in the audience began laughing, she quickly added, “No offense guys. Just y’know, something with a crew and a budget.” As for now, she’s made something that’s perfect to, in the words of the Man in the Black Hat, “smoke a beer, sip a joint to.” That’s no small feat. Paradox is custom-built for dipping into at random, a series of strolling contradictions that somehow make sense when you meet it on its own sly, stoned level. It’s not for everyone, but it doesn’t need to be. It could not be more perfectly titled.