A letter signed by all four members of the Beatles petitioning for Mick Jagger to play the lead role of Alex in the film adaptation of A Clockwork Orange has hit the auction block. Paddle8 will offer up the unique item, which carries an estimated selling price of $18,000 to $25,000.

As the story goes, in February 1968, Jagger’s famous friends – including John Lennon, Paul McCartney, Ringo Starr, George Harrison, Marianne Faithfull and Anita Pallenberg, among others – sent the autographed petition to Dr. Strangelove screenwriter Terry Southern. Southern was working on the big screen adaptation of Anthony Burgess’ dystopian, ultraviolent novel and the letter implored that Southern cast the Rolling Stones singer, and not Blow Up star David Hemmings, in the leading role of the film.

“We, the undersigned, do hereby protest with extreme vehemence as well as shattered illusions (in you) the preference of David Hemmings above Mick Jagger in the role of Alex in The Clockwork Orange,” the typewritten, all-caps letter reads. The front side of the petition is signed by Pallenberg, Faithfull, French filmmaker Christian Marquand and others, while the back of the letter finds the signatures of all four Beatles.

Jagger – who originally bought the Clockwork rights from Burgess for $500, only to sell it for a large profit to producer Si Litvinoff – had his own vision for A Clockwork Orange: Not only would Jagger and the Rolling Stones portray Alex and his “Droogs,” the Beatles offered their services for the film’s soundtrack. “This film should break ground in its language, cinematic style and soundtrack. [And] the Beatles love the project,” Litvinoff wrote in a letter to potential Clockwork director John Schlesinger, The Guardian writes.

In the end, neither Hemmings or Jagger would land the role of Alex: After the British Board of Film Censors banned Southern’s script, Stanley Kubrick eventually secured the rights to A Clockwork Orange and cast Malcolm McDowell in the Alex role after seeing the actor’s debut performance in 1968’s If… According to Paddle8, Kubrick’s concerns about Jagger’s decadent lifestyle also cost the singer the role. While the Beatles didn’t provide the soundtrack, their Magical Mystery Tour does make a cameo when Alex peruses his local record shop in the 1971 film. 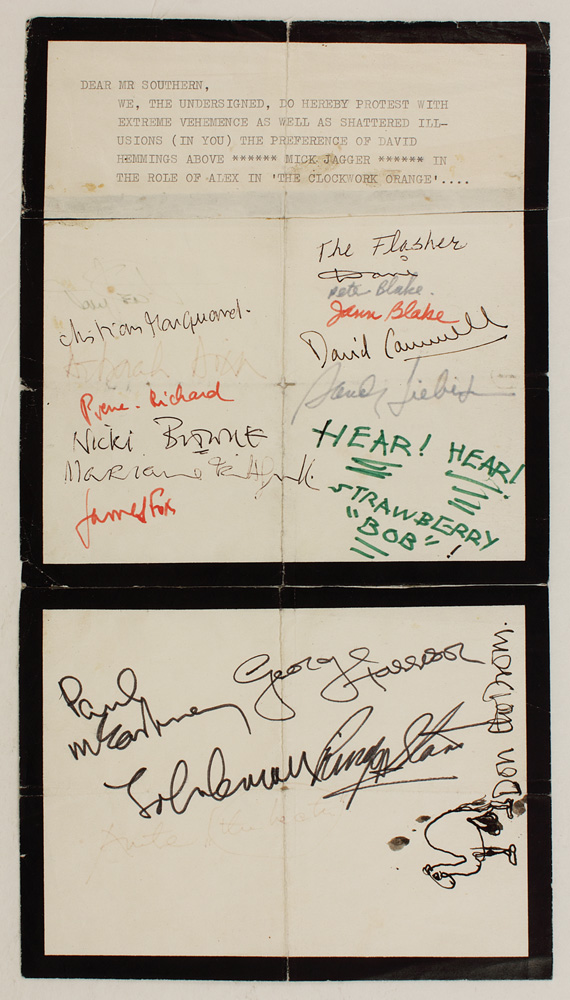