If you want to get Benicio Del Toro riled up, bring up the subject of revenge. It’s not like you won’t get a passionate reaction out of the sleepy-eyed actor over a variety of different topics — say, representations of Mexico in Hollywood moviemaking, or why a minimalistic approach to acting is often more effective, or his skill in giving “Wet Willies” (more on that in a bit). But when the subject of vengeance comes up in regards to his new movie, the drug-cartel thriller Sicario (playing in select theaters now and opening nationwide on October 2nd), Del Toro suddenly sits up very straight on the couch in his Toronto hotel room. He stops staring at the ceiling, locks in and becomes completely engaged, intensely so.

How the Cartels Work

“What’s that old saying about taking the eye-for-an-eye thing to its logical extreme,” the actor asks rhetorically. “Everybody goes blind. There are folks who’ll watch this movie and go” — he adopts a John Wayne voice — “‘This is how you do it.’ That’s what the film is asking here: What side are you on? Do you follow the rules of engagement, or do you embrace vigilantism, because you think that’s the only way to get things done?” Del Toro jerks a thumb at his costar Emily Blunt, who’s lounging on the sofa next to him, nodding. “Me, I belong to her character’s side of the equation. There has to be law and order. Or else you’re fucked, man.”

That metaphorical dish best served cold is embedded into Sicario‘s genetic make-up from the very first set piece, in which Blunt’s F.B.I. agent watches her kidnap-response team get taken out by a booby-trapped house. The promise of revenge is how she’s recruited to join a special-ops task force run by a fratboy intelligence spook, played by Josh Brolin as a human shit-eating-grin — and why she finds herself paired with Del Toro’s mystery man, who’s also motivated by the promise of payback. (The actor has said in previous interviews that after playing everything from a cop to Pablo Escobar in drug-war flicks, the chance to explore “the angle of revenge” was partially what attracted him to the role.) And the concept of revenge has long been a recurring motif in filmmaker Denis Villenueve’s work, from his breakout work Incendies (2010) to his all-star meditation on retribution, Prisoners (2013).

In the French-Canadian director’s eyes, however, vengeance was just one of the things about actor-turned screenwriter Taylor Sheridan’s script that made him sign on immediately. “The movie addresses what’s happening in Mexico right now, sure,” he says, sitting down next to his stars. “But it could have been set in the Middle East or Africa. Because really, this is a film about America, and how the foreign policies of the Western world reflect a notion that we’re above the law. We act like the rest of the world belong to us.” He pauses before adding, “I’m including my home country in this group as well; you’re not off the hook, Canada. We in the West have a tendency to create chaos. And that chaos does not improve things.”

That chaos — or as Brolin’s character refers to it in the movie, the need for America’s national security agencies to “shake the tree” — is exemplified in the movie by highly questionable activities like torturing mid-level cartel lieutenants and dispatching in-house sicarios (an ancient Roman term that essentially translates as “enforcer” or “hit man”) to do off-the-books dirty work. Meanwhile, drug lords are hanging mutilated bodies in the streets as warnings. “Welcome to Juarez,” Blunt’s character is told; forced to navigate these poles, she becomes, in the actress’s words, “a moral person caught in an amoral world, where having a sense of right and wrong is considered weak instead of good.”

As for her tour guide, Del Toro’s Colombian tough guy with a longstanding grudge and a license to kill, he’s played as more of a cypher — someone who’s clearly in his element when literally calling the shots during a tense firefight yet offers occasional glimpses of being more than just another cold-blooded predator. The fact that he’s near-impossible to read was something Villeneuve and the actor admitted was purposeful; the latter even went so far to make him extremely lone-wolf cryptic that he kept jettisoning pages of his dialogue. “There was this big monologue that my guy had about his past …” Del Toro says.

“It was this whole speech he tells my character after he saves her life, right?” Blunt interjects.

“Exactly, yeah, and it’s only after he’s known her for, like two days,” he continues. “So I told Denis, look:  In my experience, nobody opens up like that about their darkness to somebody after they’ve just met … much less some guy who’s a professional killer. So he let me get rid of a huge chunk of dialogue. You know how some actors count their lines?” Del Toro adopts a tone that can only be described as petulant-young-movie-star. “‘He got 48 lines and I got 22 lines? Who the fuck does he think he is?’ I’m the opposite of that. Give me less things to say. Let the silences say more.”

“Then he made me give all those lines to Josh,” Villeneuve says.

“Every morning, I’d knock on Josh’s trailer door, and I’d hear, ‘What the fuck does Benicio not want to say today?'” the director chimes in. 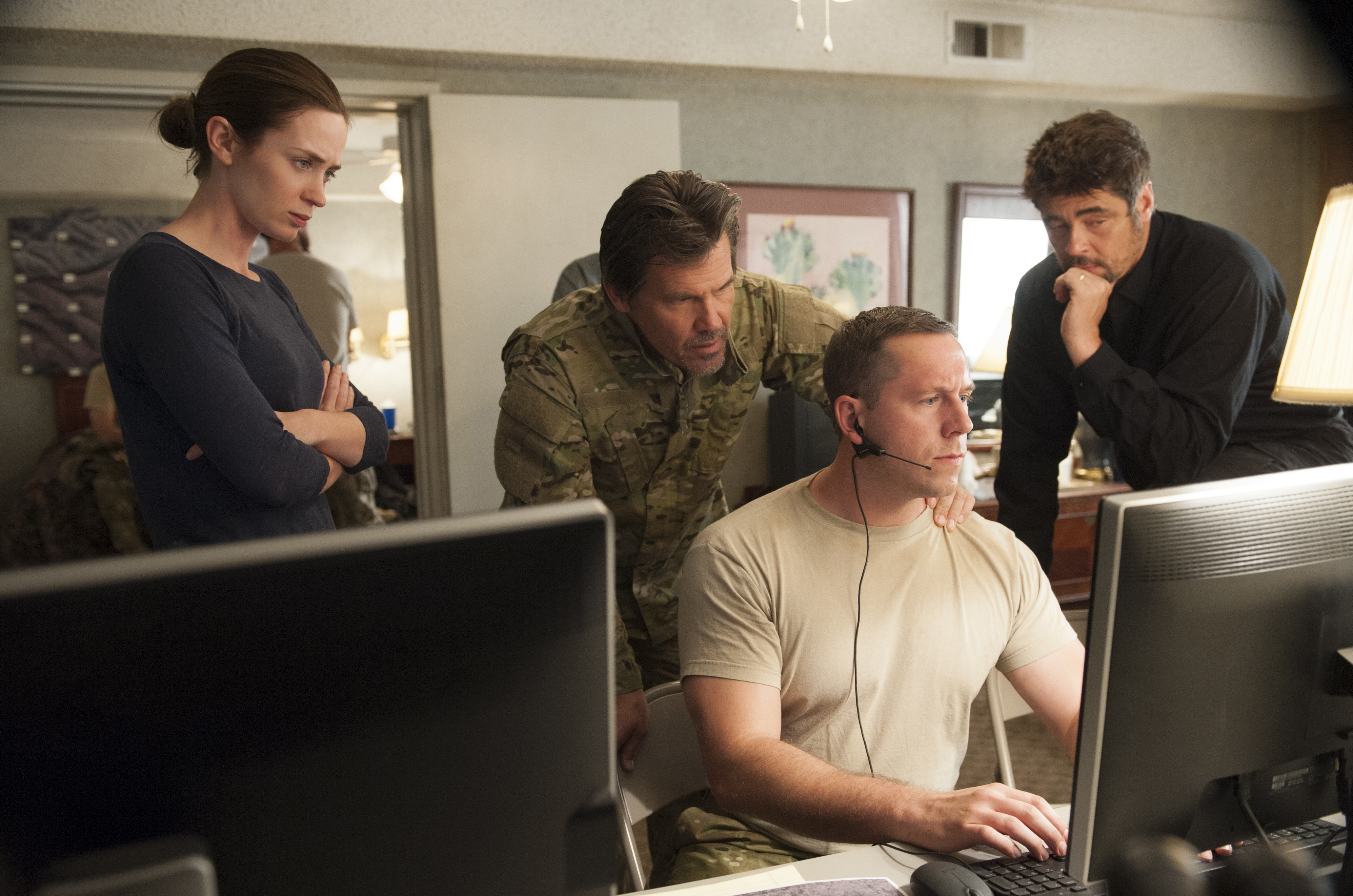 But the director says he tends to agree with his star on the silence-is-golden point: Filmmaking is an art form that relies more on presence than prose, he claims. And if someone can speak volumes in a glance or a gesture without saying a word — or if cinematographer Roger Deakins can suggest menace and moral ambiguity by letting the camera slowly creep-glide into a performer’s personal space (what Villeneuve calls the visual equivalent of “putting pressure on your characters”) — he’d much rather do that. Besides, he adds, Sicario may be a thriller, but it’s also a film that deals with an ongoing issue that can’t be summed up in a few climactic soliloquies. The only worry was that the lack of speechifying might lead some to think they were enforcing south-of-the-border stereotypes that have burrowed their way into pop culture.

“Yeah, see, now you’re talking about the tricky subject of representation — or rather, misrepresentation,” Del Toro says, leaning in. “That was the last thing any of us wanted. We showed this movie to an audience the other day, and someone said during the Q&A, ‘Well, now I never want to go to Mexico.'” He shakes his head. “Not every taxi driver is Travis Bickle. Not everybody in Queens acts like they’re in Goodfellas, you know? Denis is right when he says the film is about America, but it does take place in country that has been portrayed recently in a very negative way. Then you’ve got Donald Trump saying all this stuff about our borders …”

“You don’t want to suggest that Mexico is one huge violent wasteland,” Blunt adds, “any more than you’d want people to think Donald Trump speaks for all Americans.”

“But there’s hope, right?” Del Toro asks. “It’s gotten really bad in a place like Juarez, but if you look at what happened in Bogata, Colombia … that place has turned. It had a huge problem and it’s gotten a little bit better. I’m not a scholar on the situation, by any means — but from what I understand, people just had enough. They came out and demanded that somebody do something about it. The musician Rubén Blades wrote this letter after what happened in Iguala, Guerrero, when 43 students disappeared. Apparently, there was a connection between the government, the police department and the drug cartels that caused this to happen. And he said something along the lines of: This is not a “Mexico” problem. It’s an “everybody” problem. This isn’t a political movie. But we have to make this problem stop.”

Villeneuve and his stars are about to leave to introduce the film’s North American premiere at the Toronto International Film Festival when the subject of Del Toro’s impromptu interrogation techniques comes up — specifically, whether a scene involving his character wetting his index finger than sticking it deep into a criminal’s ear — was improvised.

“Oh, he just went around the set giving those to everyone,” Blunt says.

“That’s how Emily and I got to be such close friends,” Del Toro jokes, before he and Blunt start giving each other ice-cold stares. “I’ll get you for saying that,” she adds, before the three them break and start cracking up.