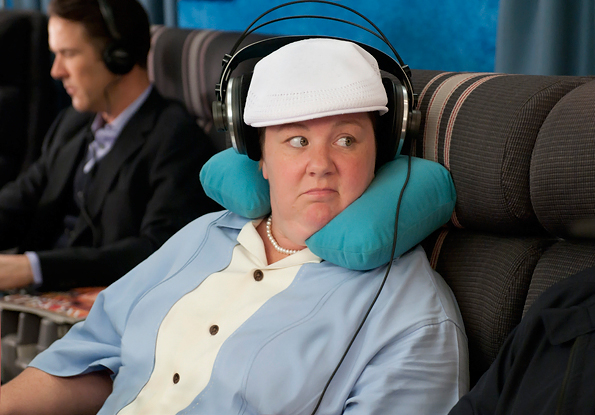 This story is from the September 15, 2011 issue of Rolling Stone.

Melissa McCarthy in real life: sweet and gracious, with a voice just a few decibels above a whisper. Melissa McCarthy as Megan, the groom’s sister in Bridesmaids: a take-no-prisoners alpha gal who bites Kristen Wiig on the ass, attempts to seduce an air marshal on a flight to Vegas, and, most memorably, copes with a gastrointestinal emergency at a hoity-toity bridal shop by hiking up her dress, planting herself on a bathroom sink and shouting, “Look away!”

McCarthy thinks the bathroom scene plays out like a horror movie. “You’re covering your eyes and trying to make it stop,” she says. “That embarrassment-horror mix is visceral, and people are so glad it’s not them. Maybe that’s why it stands out: They can say, ‘I’m doing OK! I haven’t shit in the sink this year.'” She grins. “So far.”

The funniest person alive: “It’s my husband [Ben Falcone, who plays Air Marshal Jon in Bridesmaids]. He makes me gut-laugh all day, every day of my life.”

Megan was McCarthy’s breakout role: a performance funnier, filthier and more gloriously over-the-top than anything she’d done on Gilmore Girls (where she played Lauren Graham’s best friend for seven years), or Mike & Molly, the fairly conventional sitcom she co-stars in on CBS. McCarthy made Megan seem both real and hilariously outsize, and the joy she took in every aspect of her performance – the unflattering clothes, the utilitarian ponytail, Megan giving off a lesbian vibe but being voraciously hetero – lit up the screen like a 500-watt bulb. “I’d get to the set a half-hour early every morning,” she says, “and then just sit in my car, saying, ‘Dial it down, maybe people need a little not-Melissa time.'”

“Kristen Wiig told us that Melissa was the funniest person she knew, but I was not familiar with her,” admits Judd Apatow, who produced Bridesmaids. “She showed up at the audition with that character fully formed, with the carpal-tunnel-syndrome glove, the golfer’s outfits, the hair. And a majority of what she said she made up in improvs, or on the spot. My favorite being her pitch for the theme of the bridal shower: ‘Fight Club.'”

Apatow cast McCarthy in his upcoming, untitled project as a mom who becomes a rival of Leslie Mann. Apatow encouraged her to vent her hostility. “Apparently, I love to swear,” McCarthy says. “It was so therapeutic. I’ll never have road rage again.” “Melissa is one of the only people out there who can get the laughs that make people choke,” says Apatow. “I definitely do not know anyone funnier.”

My favorite joke: “‘What is a Chinese dentist’s favorite time? Tooth-hurty.’ My husband tells it to me all the time, but he always says it as if I’ve never heard it. And he usually delivers it with one leg up on a chair.”

McCarthy grew up a long way from Hollywood, on a farm in Illinois. She was a young goth who came to New York to design women’s clothing – but then she did stand-up at an open-mic night. “I was too dumb to know you had to prepare anything,” she says. But she did well, and soon after moving to L.A. in 1998 to become an actress, she scored her Gilmore Girls role. Most of her scenes were in the kitchen: “It was seven years of stirring and sprinkling salt.”

Even when hitting her marks on Mike & Molly, as a teacher in love with a cop, she breaks the strictures of romantic comedy. “I don’t find anything interesting about someone perfect,” she says. “I’d rather talk about a rash than extensions. I’m always saying, ‘What if we black out my teeth?'”