'Manchester by the Sea': The Story Behind Sundance 2016's Best Movie - Rolling Stone
×
×

If you’ve seen writer-director Kenneth Lonergan’s work before — the handful of films and half-dozen one-acts and plays he’s penned to date — you understand why he’s racked up numerous theater awards, Oscar nods and a Pulitzer nomination. And if you’re lucky enough to meet Lonergan, you’ll understand where that singular voice comes from. Sitting in a crowded Sundance Film Festival lodge off of Main Street, the shaggy, bespectacled 53-year-old director of You Can Count on Me and Margaret acts like a Kenneth Lonergan character.acts like a Kenneth Lonergan character. Within seconds of meeting an interviewer, he’ll jokingly call him an asshole and then affectionately pat him on the arm. He stumbles through answers only to suddenly, passionately verve into eloquence and righteousness. He comes off as simultaneously happy, Eeyorish-ly sad, and constantly radiating a deep sense of empathy. Most of all, he seems genuinely surprised to hear that he’s just made a masterpiece.

Immediately establishing itself as the must-see film at this year’s festival, Manchester by the Sea follows a Boston-based handyman named Lee (Casey Affleck) who goes about his daily chores with a sense of quiet desperation. A phone call summons him back to the seaside town of his youth that gives the movie its name, with unexpected news: His brother (Friday Night Lights‘ Kyle Chandler) has passed away. When he gets there, he discovers that his sibling’s will names him as the guardian of his surly teen nephew (Lucas Hedges, in a starmaking role). A series of flashbacks reveal that Lee and the boy have long had a tight bond — and that this reluctant surrogate parent has an old-wounds history that makes returning to the old neighborhood impossible to contemplate.

“I don’t like the fact that, nowadays, it feels like it’s not permissible to leave something unresolved,” Lonergan says. “I mean, what the fuck is closure? Some people never get that. Some people live with their trauma for years. I’m not interested in rubbing people’s faces in suffering, or in saying, ‘These are the tough facts of life that I know and you don’t!’ But I don’t like this lie that everybody gets over things that easily. Some people can’t get over something major that’s happened to them at all; why can’t they have a movie too? Why can’t there be one film about somebody who doesn’t magically bounce back?”

The genesis for Manchester originally started with actor John Krasinski (The Office) and Beantown native Matt Damon, who’d starred in a production of a Lonergan play over a decade ago and had appeared in the director’s sophomore feature, Margaret (2011). The duo had been kicking around an idea about an emotionally crippled jack-of-all-trades for a while when they approached Lonergan to help them flesh it out. “They came to me with the idea,” the filmmaker confirms. “I think Matt was going to direct and John was going to star in it; they wanted me to write the script. They eventually had to go off and do other things, but I really liked the initial idea. So I kept working on it for three years. The original draft was just written straight through; it wasn’t until I had the notion of presenting the relationships through flashbacks that it began to open up.” 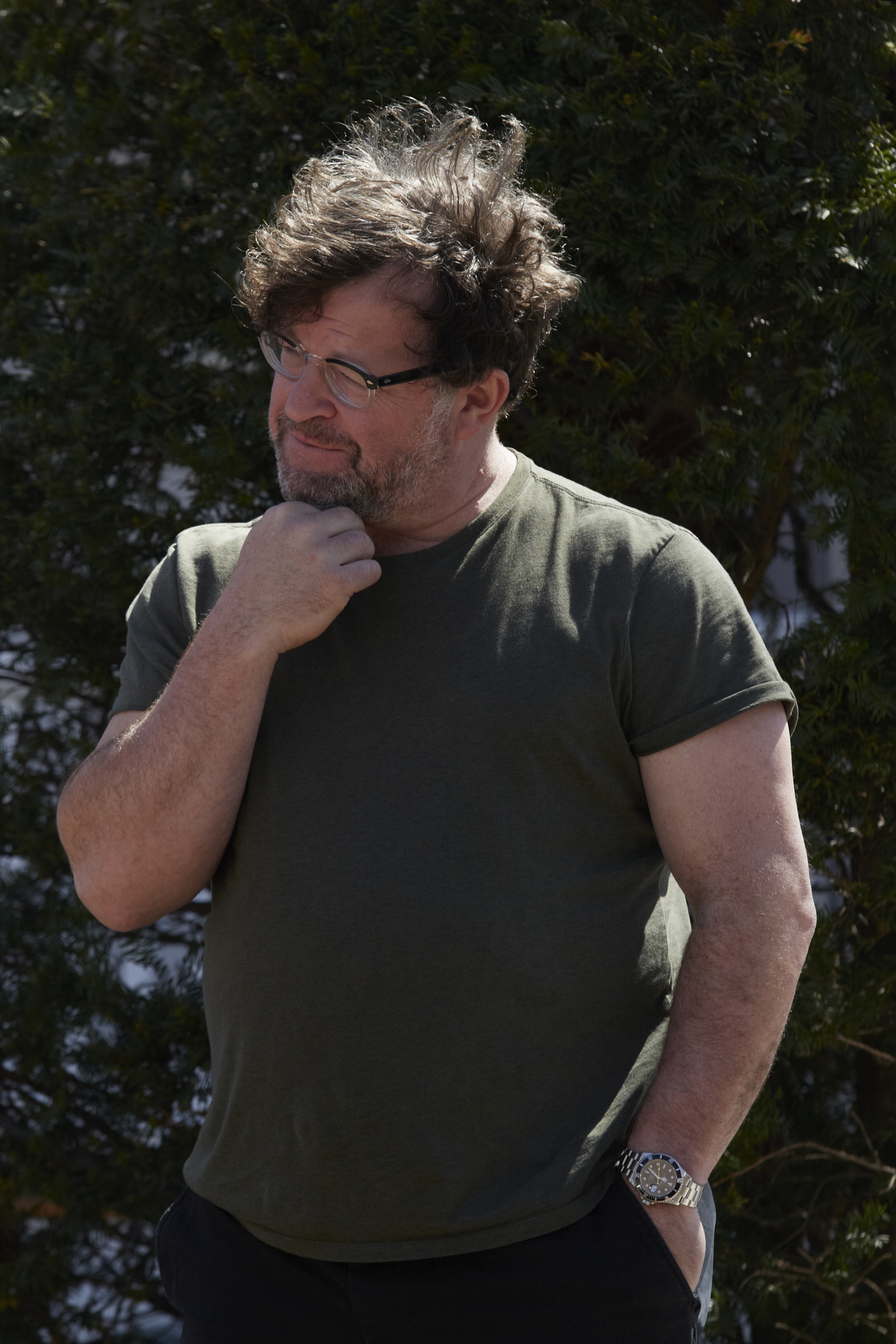 At the premiere’s post-screening Q&A, Damon filled in a few of the blanks: “Once I read a very, very rough draft — it was about 4,000 pages — I just begged Kenny … ‘You have to direct it.’ It’s one of the most beautiful things I’ve ever come across. I was going to be in it, he was going to direct, and then … I had a full slate. I couldn’t do it for a year. And in a bizarre kind of fit of generosity, I gave it to Casey. I wouldn’t give this role up to anybody but Casey Affleck.”

Thank god he did. Though the entire cast brings their A-game — from Gretchen Mol, who plays a recovering alcoholic, to Michelle Williams as Lee’s bitter, brittle ex-wife — Affleck is the revelation here; this is his movie from frame one. Whether quietly rebuffing people who want to get closer to him or trash-talking with his spiky ward, the actor gives what is easily his most layered, nuanced performance to date. He’s given impressive turns before — see Gone Baby Gone or The Assassination of Jesse James by the Coward Robert Ford — but the way Affleck gradually shows you the man’s bone-deep grief and emotional damage makes you believe that one of this generation’s finest actors has simply been waiting to be coaxed out.

“I mean, what the fuck is closure? Some people can’t get over something major that’s happened to them at all; why can’t they have a movie too? Why can’t there be one film about somebody who doesn’t magically bounce back?”

“I don’t think people recognize just how good Casey is here,” Lonergan says, nodding. “He just threw himself into this, pressing me on every detail and wanting to know the thought process behind every decision. There were a lot of discussions about how we’d be able to show what’s going on in the head of someone who’s closed off to the world. We eventually came up with the idea that Lee is obsessed with performing tasks: If something is broken, he fixes it. He keeps moving because if he stops, he has to think about this great past tragedy that’s scarred him for life. [Hint: It involves his family.] If it hadn’t been for his brother, Lee probably would have left this world long ago. And when he dies, that protective feeling gets transferred to the nephew.”

Affleck’s battened-down character and Hedges’ boundary-pushing angry young man bicker back and forth like longtime ball-busting family members  — a dynamic that apparently describes the relationship between Lonergan and his leading actor on set. “Yeah, Casey is also an immense pain in my ass,” the director says, laughing. “He didn’t want to do any sort of Boston accent! I spent weeks up in Manchester researching the area, because I’m not from there and I wanted to get the region right. And while it’s not like a Southie accent, you can still hear it. But he just said, ‘No one talks like that under the age of 40, Kenny, I’m not fucking doing it.’

“Not two hours later,” Lonergan continues, “some 12-year-old local boy wanders by the set, and I hear him say” — he adopts a caricaturish Northern Massachusetts voice — “‘Oh my gawd, is that Casey Affleck?!? I just gotta meet him!’ I just yelled, ‘Hey, Casey, I think this kid is under the age of 40, can you please do the fucking accent!’ Once, we were doing this tense scene at a dinner table, just doing take after take. I said, ‘So for this next one, maybe look away from Lucas, just stare down at your plate or something.’ And he goes, ‘Oh, the old stare-down-at-your-plate trick!'” Lonergan cracks up. “Our editor would get footage back and ask the crew, ‘Have they killed each other yet? Is everything okay on set?’ Because we’d just lay into each other. But that’s how I talk to people I love.”

And it’s talk — specifically, the kind of dialogue that feels painful (and painfully funny), remarkably intimate and often uncomfortably real — that distinguishes Lonergan’s screen work from the rest of what passes for movies aimed at people over the age of 14. That a playwright would have a facility for dialogue is not a surprise; that this same person would be able to bring complex person-to-person interactions to the big screen without making things chatty and inert is a bit of a shock, and makes his infrequent forays into filmmaking worth the wait. Despite his repeated claims that he’s “not a real filmmaker,” Lonergan knows how to use the medium to communicate the human condition in all its ragged glory. He’s the closest thing we have to an American Yasujiro Ozu — and Manchester by the Sea proves he’s practically peerless in portraying loss as a living, breathing thing without resorting to the vocabulary of griefporn.

“It’s funny, I started out trying to make a film about grief,” he says, when the phrase comes up. “About telling a story involving sorrow and regret. And as it went on, it occurred to me that it’s a lot more about love than I’d realized. I think I’m always just interested in stories about people who love each other. I find it very touching how much people care about each other, even when people don’t get along or something terrible happens between them. People don’t always care about their parents, their children, their brothers or sisters — but when they do, it’s pretty powerful. It’s almost not worth being alive if you don’t have that connection.”