I mean, you seem like the kind of guy who looked at books on vaginas and kind of figured out how everything worked pretty early on, so I’m sure you didn’t have to worry.”

For most folks, telling someone that they appear to know their way around the female anatomy would fall somewhere between flirting and highly questionable flattery. For writer-director Leslye Headland, this is small talk, casual conversation, easy-breezy coffee-klatch chit-chat. If anything, the woman behind the deconstructed romantic comedy Sleeping With Other People is more than comfortable waxing poetic about stuff people usually shy away from when being interviewed — like, say, how hopeless most guys are when it comes to navigating the Southern hemisphere.

Sundance 2015: Jason Sudeikis and Alison Brie on 'Sleeping With Other People'

“They have no idea what’s going down there,” Headland says, wide-eyed and smiling. “Just, zero clue. I have a chart of the vagina in my house, and when a male friend saw it, he said, ‘Wow…this just looks like something I’m going to fail at!’ I don’t get the mystery. It’s not a boogeyman.”

Thankfully, the 34-year-old filmmaker has included a PSA of sorts in her new movie about two friends (played by Jason Sudeikis and Alison Brie) who bond over their inability to make the boy-meets-girl thing work. He’s a commitment-phobic Casanova; she can’t stop cheating on boyfriends with a so-bad-for-her old flame (Adam Scott, channeling his inner douchebag). Having taken each other’s virginity in college, the dynamic duo meet up in 13 years later at a Sex-Addicts meeting and form a Platonic relationship while hooking up and breaking up with others. All of which leads up to an unforgettable sequence in which Sudeikis demonstrates in explicit detail for Brie how to find the G-spot — using his fingers, techniques such as the “Dirty DJ” and a green-tea bottle.

“It was important to me that it was a guy doing it, and not just a woman going ‘Here’s how it works,'” she admits. “If I could do that and have it be sexy and funny and not straight-up fucking gross…then I know I’ve made it.”

As a playwright (she wrote Assistance, loosely based on her time as an assistant for Harvey Weinstein) and a TV scribe-for-hire (she was in the writing room of the late, lamented FX show Terriers), Headland specialized in the acerbic and the assertively offbeat. But as the voice behind two painful, painfully funny big-screen outings, she’s slowly emerging as a stealth comic force. Even when her dialogue gets down and dirty, as in the blow-job treatise that graces her women-behaving-badly feature Bachelorette (2012) or the frank sex talk of Sleeping, there’s a zing to Headland’s version of the usual purposefully uncomfortable, slap-tickle funny business that suggests she’s not just Judd Apatow in a skirt. Not everyone could pull off “When Harry Met Sally for assholes” — a description she gave her new movie at its Sundance premiere — and still be a possible contender for this generation’s Great Screwball Hope. And few, if any, are making raunchcoms that so deftlessly juggle sharp tongues, beating hearts and sheer balls as her. 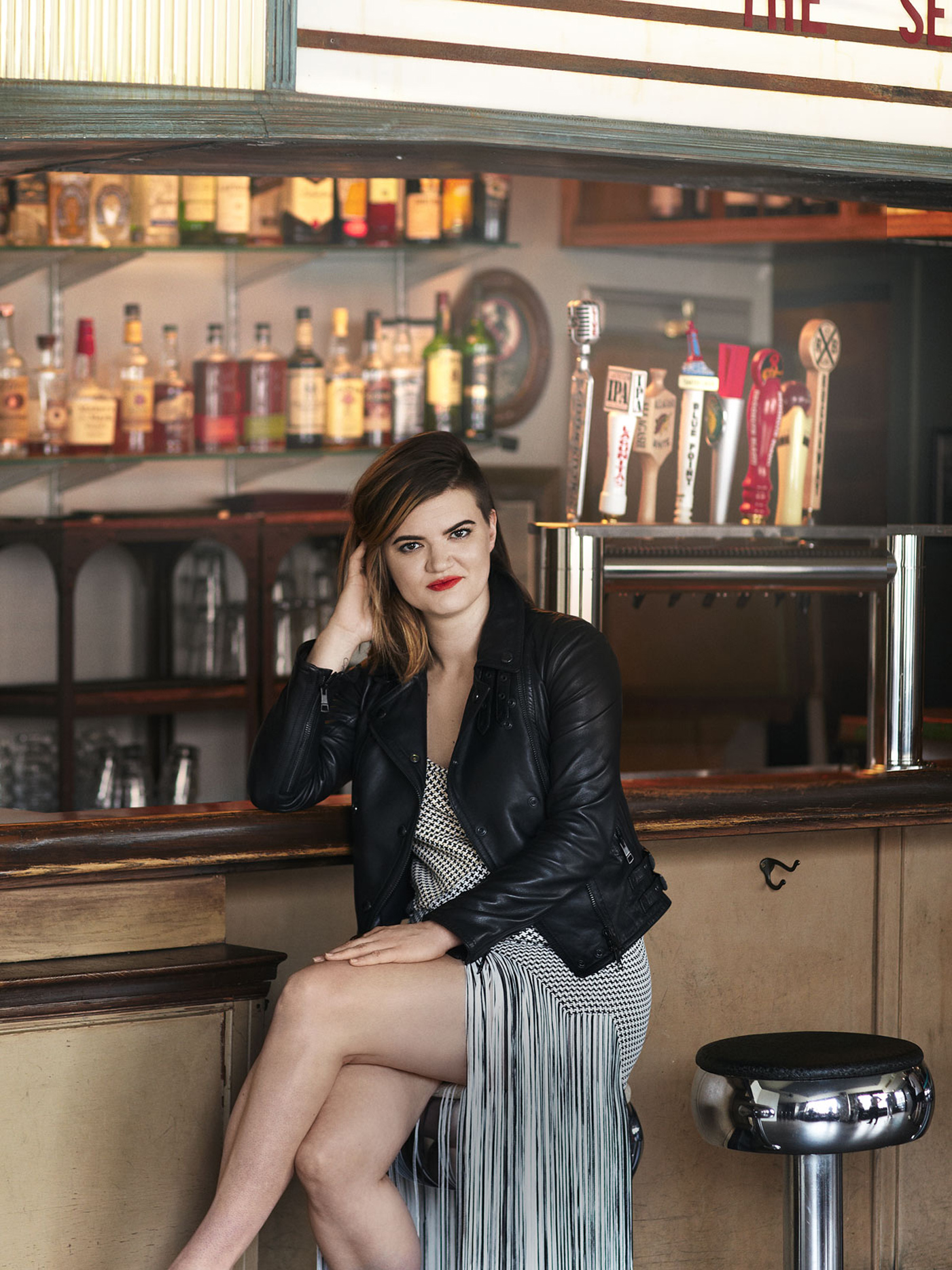 According to Headland, it was a combo of red-flag sex and a rock-solid friendship that inspired her to delve into the dynamics of male-female buddies. “There was someone I kept hooking up with who was not good for me,” she says. “Everyone I knew was confused: What is it with you and this guy? He was not nice; Adam Scott’s character is kind of based on him. But luckily I had this male friend who I started hanging out with constantly. It wasn’t sexual at all — it was more like we both had the same level of I-can’t-leave-the-house depression. Both of us were such romantic failures, and one of our favorite things to do was to make fun of couples: ‘Oh, look, they’re taking their relationship out for a walk. They’re giving it some sun!’

“Then after a year or so of hanging out constantly, going to brunch and smoking endless packs of cigarettes” she continues, “I realized: Oh, wait, we look like one of those happy couples to everyone else. Only we’re not a couple and we sure as hell aren’t happy! And that’s when I thought, I think there’s a really fucked-up romantic comedy in here somewhere.”

Originally, she pictured the male character, Jake, as an older man — “like Christoph Waltz’s character in Django Unchained, only instead of collecting bounties and revenge-killing, he’d be talking about pussy.” After running into Sudeikis one day, Headland started to retailor the role to fit his skill set. “Which is that he’s almost cripplingly charming,” she says, cracking up. “He has this way of talking to you where you find yourself going ‘I’m not exactly sure what you’re saying and I don’t know you that well, but I’m convinced I’m in love with you and will now tell you all my secrets.'” Although she was a die-hard fan of Community, the filmmaker wasn’t convinced that Brie was the right Lainey type; after the actress finally convinced Headland to let her read and improvise with her future co-star, “it was like I went, ah, there’s the [1930s comedy director] Ernst Lubitsch movie I kept hearing in my head, only with way more profanity. Perfect!”

“[He was] like Christoph Waltz’s character in Django Unchained, only instead of collecting bounties and revenge-killing, he’d be talking about pussy.”

“Leslye gave me a great dancing-on-Molly scene and a really horrible sex scene, which is a dream for any actress,” Brie jokes, referring to an intimate sequence between her character and Scott’s reprehensible lover that goes from cringe-comic to raw and cringeworthy in a heartbeat. “That she can make a movie with both of those sequences in it and not have anything feel jarring is kind of unbelievable. And she writes great characters, especially female characters…you don’t always see such dynamic, risky, flawed women on screen, even in comedy.”

Headland knows that it’s her particular take on XX-chromosomed protagonists — spiky, vulnerable, confused, assertive, often fucked-up, occasionally foul-mouthed and always speaking their mind — that have left some viewers ecstatic over her and others remarkably uncomfortable with it, especially when she was first pitching Bachelorette before the current women-in-comedy boon. “Keep in mind Bridesmaids had not been made yet,” she says, “so when I described the script to financiers, I was told ‘You should probably ask your parents for $250,000 for this and shoot the thing yourself.’ Then suddenly, a year and one movie later, it was ‘So about that funny-lady thing you told us about…’

“I was lucky to come along when R-rated femalecentric comedies became moneymakers,” Headland continues, slowly getting worked up. “Comedy and horror are really two of the only genres where women can get a voice now. It’s not big-budget franchise movies and superhero movies. Look what happened to Ava DuVernay. She’s the Beyonce of filmmaking, and she can’t get nominated for Selma?!? What other reason can there be except, ‘Well, they don’t like women, I guess?’ They are not interested in us unless we’re in a group, and in a Vanity Fair spread. Probably just wearing lingerie.”

Then she stops, lets out a raucous laugh and her eyes go spotlight-wide again. “But listen, I can’t complain. Or rather, I won’t. I got to make my romantic comedy. I got to get out of my depression and work through some stuff with this movie that’s really helped me out. [She says she’s now in been a healthy long-term relationship for over a year.] And I got make Jason Sudeikis stick his fingers into a bottle as if it were a vagina and get away with it. Why else would you go into this business, right?”