“I always liken myself to the bearded lady,” says Juliette Lewis. “Because I’m an actress turned musician, a woman doing male-dominated rock & roll. … I’m the oddity at the freak show, you know?”

Lewis is speaking with Rolling Stone from New York City where, in a few hours, she’ll be attending the Tribeca Film Festival premiere of a new documentary on her musical life, Hard Lovin’ Woman. The Michael Rapaport-directed short, which will be available on Red Bull TV beginning April 23rd, chronicles Lewis’ mid-2000s turn away from a successful acting career (launched in earnest with her Oscar-nominated role, at 18, opposite Robert De Niro in Cape Fear) in favor of throwing her sweaty, shaking body across stages and into crowds as the frontwoman of her own high-energy rock band, Juliette and the Licks. Of her singing and performing, Lewis says, “That’s me trying to get everything out, in a very physical sense. It’s personal catharsis through the drum kit and the guitars and the bass. I feel like the music passes through me.”

In the years since, the Licks have broken up and reunited, and Lewis, now 42, has become more immersed in TV and film work again. But music is still a primal and primary force in her life. She recently cut “some really, really wild songs” with Florence and the Machine’s Isabella Summers, and will be heading to Europe in a few weeks for her first tour in more than a half decade. And later on the night of our conversation with Lewis, she and her reconstituted band will take the stage at an afterparty following the Tribeca screening of Hard Lovin’ Woman.

“So I’m fucking riddled with nerves right now!” she exclaims. “But, you know, thank God for nervousness. I would be nervous if I didn’t feel nervous. Because that nervousness is excitement. It’s anticipation. It’s energy. And at the end of the day, when I’m out, there I just want to be able to surrender to the moment. It’s what I try to do in acting, too. I’m just striving for truth.”

The always-animated Lewis spoke to Rolling Stone from her hotel room about Hard Lovin’ Woman, dealing with the stigma of being an actor who rocks and some of the artists she’s worked with in her music career, including Dave Grohl, who appears at length in the documentary. She also expounded on whether or not, perhaps as a result of the idiosyncratic characters she has played in movies like Cape Fear, Natural Born Killers and Kalifornia, people think she’s crazy in real life.

Then she got ready to go for a run. “It’s good for my sanity,” she explained.

How did Hard Lovin’ Woman come together?
It all happened organically and synchronistically. … Is that even a word? [Laughs] Because I’ve always wanted to make a documentary, sort of as a love letter for the audiences that came out for us. And so for years while I was on the road, I was compiling all this footage, but I never did anything with it. Then my friend Ted Newsome approached me with this idea, because he was working with Red Bull, and they were launching a new TV platform and looking for interesting stories. And once they mentioned they were thinking about Mike Rapaport to direct it, I was in. Because I knew I could trust him to follow me around. I knew I could trust him with all my old archival footage of me when I was younger. I knew I could trust him with all the footage I have of the band on the road. Because we’ve known each other for 20 years. And aside from being a friend, I think he’s a real-deal filmmaker. And he carved out a really beautiful narrative.

Watching the finished product, was there anything that surprised you?
Yeah – the whole thing! It’s really hard to watch yourself, you know? You’re always gonna be like, “Oh, shut up. …” Because you live with you! But one thing about it is, there is a truth. A spirit. It’s a very positive, non-salacious documentary. Mike was making a portrait of what drives an artist, really. And it definitely captures me as an artist. And one thing I was surprised by was that there’s a lot of humor in it, which I’m so glad Mike kept in there. Because I’m really not an overly serious person. Although I am, so, fuck it, I don’t know …

You threw yourself into music just before your 30th birthday. You’ve said in the past that approaching that age milestone played a significant role in your decision.
I think in my late 20s, I was starting to enter that realm of complacency, which is the most terrifying place I can imagine as an artist. I felt time creeping up on me. And from as far back as I could remember, I had always intended to be musical, and to be a songwriter and a performer. So the fact that I hadn’t done it at that point was disconcerting, like, “Holy shit! I’ve gotta try to regain all that I am in my creative self!” And even though I didn’t feel old at 30, the fact that I also wasn’t 17 when I decided to start a band made it possible for me to cover ground I wouldn’t have been able to cover at a younger age. Because at that point in my life, I had a crazy work ethic. I was disciplined. All my drug problems were behind me. So I approached my rock & roll music with an athlete’s frame of mind. It was about stamina and endurance and giving everything onstage, rather than debauchery and all that other crap. 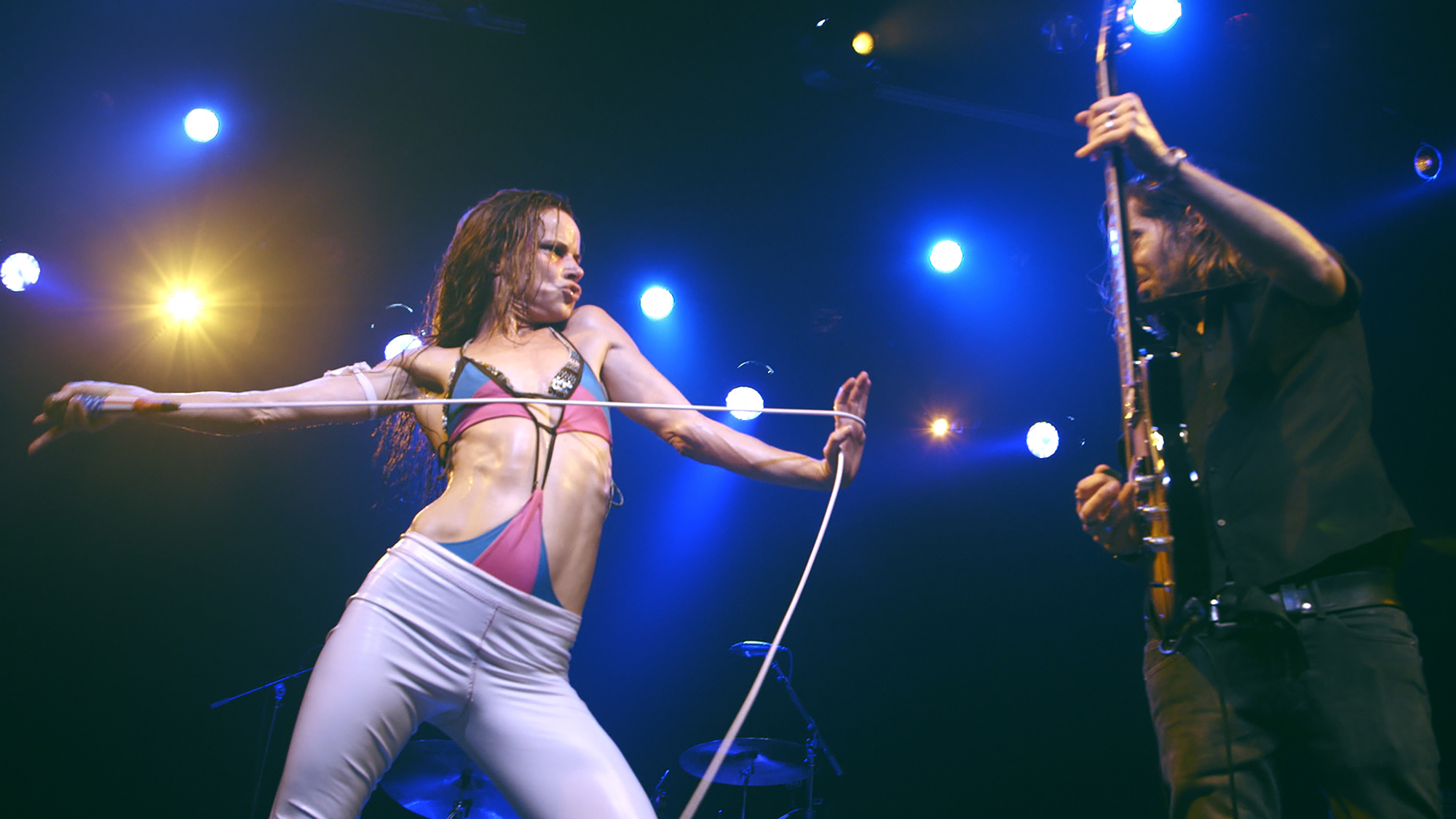 One of the points touched on in Hard Lovin’ Woman is that actors who launch music careers are commonly regarded with a heavy amount of skepticism. In one scene, you’re on the phone with a journalist who asks you if your band “is better than Russell Crowe’s.” Did you feel you had to fight this perception that you were a sort of rock & roll dilettante?
Yeah, but that was also the least of my concerns. For me, the most challenging thing was developing myself as a songwriter and as a performer and as the leader of a band. And I just did it. As for how it was going to be viewed by other people, I knew what I was up against. But I just figured, the fucking expectations are going to be so low, I can’t help but to be rock solid! [Laughs] You know what I mean? And my thing was always, “Whatever got you in the room, I don’t care. As long as you’re there.” Because I knew that was where the music was going to speak. That was where I was gonna make it happen.

What do you have coming up musically?
I booked my first tour in seven years. We’re leaving for Europe from here. I haven’t been out in a while so I’m really excited. And, oh, my God, I have to tell you because this is Rolling Stone and, um, you guys care about music, right? I’ve got the greatest rhythm section now that anyone could ask for – I’ve got Brad Wilk from Rage Against the Machine on drums and Juan Alderete from the Mars Volta playing bass. It’s always been my dream to have a monster rhythm section that’s just all groove and pocket. And that’s what I’ve got with these two. Then I have Todd Morse, who is my original collaborator and who I started the Licks with, on guitar, and another guitarist named Nick Maybury, who played in Scott Weiland’s last band. We’ll be playing old Licks stuff and then also some of the new material.

You mentioned Juan Alderete from the Mars Volta. You’ve also worked with other members of that band, in particular Omar Rodriguez-Lopez, who played on and produced your 2009 solo album, Terra Incognita.
Omar is such an incredible producer. He made me feel brave and he brought things out of me as a songwriter. As a shortcut, I always say that’s my weird record in the sense that there’s a lot of songs on there that aren’t traditional structures. There are sounds that are way different than Licks sounds, and I wanted that. I craved that.

The last Licks album, 2006’s Four on the Floor, featured Dave Grohl. What did you take from the experience of working with him?
So much. I cannot find another word to describe how much he helped, other than to say “mentor.” We all met the Foo Fighters early on in the band, at the Reading and Leeds Festivals in, I think, 2004 or 2005. Dave was just really supportive of us, and I felt could talk to him about anything. Then later on when we were looking for a new drummer, he said, “I’ll do it!” He just dug into the songs, and he has such power and is so dynamic. To be next to that kind of powerhouse of a player, I always joke like it was being next to Zeus.

In Hard Lovin’ Woman, he has some nice things to say about you, too.
Right? [Laughs] It’s kind of ridiculous.

Finally, in one of the last scenes in the documentary, Michael Rapaport asks, “Why do people think you’re crazy?” Do you think people think that about you?
Well, it’s so funny because the world we live in, we’ve gotta use language, you know? And for so long so many people, anyone from George Clooney to, I guess, people who aren’t known, would meet me and say, “Oh, you’re so down to earth!” But the crazy thing, that’s something that’s always followed me – so much so that I was almost going to name my first EP Is She Crazy? So I don’t know, I just think it’s a shortcut to encapsulate a whole bunch of stuff. But I don’t care, I think it’s funny. Anyway, yeah, Mike asked the question. And, I don’t know … I don’t know the answer! But if people want to call me crazy, all I can say is, man, that’s a better deal than if I’m called something else. …