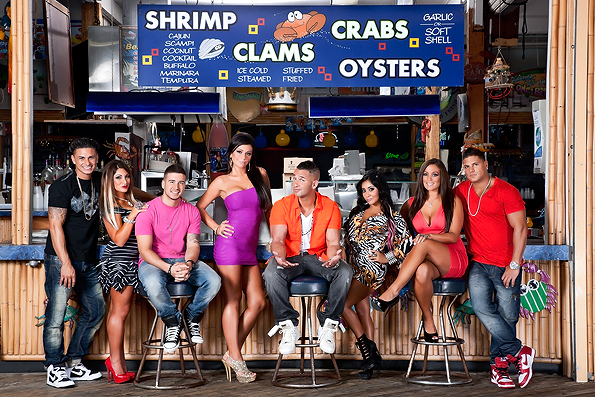 USA! USA! USA! Having exported the Jersey experience to Italy for a spell, the gang finds themselves stateside for Season Five. Did anyone else besides me forget that watching Jersey Shore is like someone opened the top of your skull and squeezed in a rag soaked with pickle water, Lotrimin and Ron-Ron juice? At first, you just try to get it down, then you get used to it, then it’s all you order because you have gone insane. Despite rumors that this season could be their last, I pray to blond, blue-eyed Baby Jesus that it’s not. My fantasy Season Six involves the cast getting airlifted, Dumbo Drop style, into North Korea. Once we get them over the 38th parallel, they’ll crack that sucker right open, one pair of stars-and-stripes booty shorts at a time.

Back on the sunny shores of Seaside, no one wants to sleep in the same room as the Situation. As you may recall, some sort of extraterrestrial parasite got into Mike’s brain cavity and gained control of both his motor functions and mental facilities, forcing him to do all sorts of inexplicable dum-dum shit like smashing his head into a concrete wall, or trying to make Snooki admit to fucking him. When sleeping arrangements come up, everyone is suddenly very interested in their shoes or what the sun looks like or a speck on the horizon. “I love my old bed,” Snooki explains. “I peed in it last year, so who would want to sleep in it?” No one, girl! You tell it like it is! Let freedom ring/ Let the white dove sing! Let the whole world know that today/ You will pee on everythiiiiiiiiing!

As soon as everyone drags their garbage bags filled with other garbage bags into the house, Snooki cracks open a brand-new pickle jar and starts to slurp down its green, briny goodness. “Are the hermit crabs still in here?” Deena screams as she runs into their room. Dear Lord, are they? Were those crabs members of the S.S. in a past life? While the best rooming solution is, clearly, to give the Situation the Smoosh Room (then seal off all the air until you can no longer hear frantic pounding from inside), instead Ronnie and Sammi are required to once again join him in the Crying Room, a/k/a Room of Sorrows, a/k/a Cubiculum Lacrimarum. Just seeing those sad little matching bedspreads is enough to conjure up horrific memories of Season Three: Journey to the Center of Domestic Abuse. The ghost of Sammi’s glasses haunt this place still. Acknowledges Ronnie, “If he gets involved in my relationship, I will be forced to put his bed on the porch.” Meanwhile, anyone want to place bets on how many milliseconds it’s going to take for that downstairs toilet to break again? Too late; we’ve all already lost.

Having unpacked, the gentleman rush off to lift weights, get tan, launder their unmentionables. “If we don’t GTL, it’s like the end of civilization,” Mike notes. Wait, if they don‘t GTL? Having checked in with their boss/5,000 fans at the Shore Shop, the gang heads to Captain Hook’s for a welcome back drink. Once inside, every single person the cast members know in the world pop out to surprise them. The family highlights include JWoww‘s slight, blond, computer-programmer-looking dad Terry and “ultimate creep” Uncle Dino, whose picture is next to the word “handsy” in the dictionary. I’m assuming their spin-off is already in the works, so might I suggest having Terry building some kind of time machine and Uncle Dino falling off a lot of bar stools? Ugh, what am I saying? As if I could give advice to the masters of the form!

Snooki’s boyfriend Jionni is also in attendance, his tan shimmering like the iridescent display of the peacock. There’s no drama going on, so the Situation must descend on Snooki with her friend Ryder and the Unit. As you may recall, the Unit and Ryder were the other couple present the night of the Situation and Snooki’s alleged sexual encoun…oh god, my dinner is just rocketing out of my stomach onto my laptop under its own power! It‘s everywhere!

In all seriousness, though, the Unit is some kind of sentient taint infection, right? The Situation may have gone full Hobgoblin, but at least Mike has been around long enough for us to deal with his transformation into Monty Burns with a modicum of bemusement. The Unit, on the other hand, arrived at the bar a fully-formed douche. He makes a beeline to Snooki and delights in threatening to blow up her spot to Jionni, with details regarding how she obviously boned the Situation. “She should be licking my asshole right now,” the Unit muses. “Your name is the Unit,” Snooki rages back. After the party ends, the Unit, Ryder and Jionni all retire to the house, along with the rest of the gang, for grilled meats and plotting. Snooki sequesters Jionni in her room to hide him from the Situation’s malevolent schemes. “It’s like ironic! It’s poetic! It’s insane,” he giggles, delighted at having his witnesses the Unit and Ryder under the same roof. “It’s checkmate for Snooki.” You bring deep dishonor to the duck phone, Mike.

Vinny is shaken by his brief reunion with his family. Sad, anxious, stressed, hyper and tired, Vinny longs to be home and live in some semblance of normalcy. This is how you know Vinny is the one that’s going to make it out of this experience as a human being. Not as a great human being, just…one.

If I haven’t made it painfully clear in the past, Deena has officially become my favorite cast member. She’s my way into the narrative, if you will. Ryder and Pauly practically have the tip in while the gang eats burgers on the back patio, their laughing mouths filled with pickles and foolishness and a ravenous hunger that no amount of undercooked ground chuck will ever satisfy. When Deena huddles silently at the foot of Pauly’s bed clutching a green chipmunk, her erstwhile beloved and his intended waiting in awkward silence,  I was right there with her. “Whatever. I’m happy,” Deena says to no one in particular as she slowly, artlessly leaves the room. Why wouldn’t you be, Meatball #1? Why would anyone need more than this? Upstairs, Mike and the Unit prepare themselves for bed. “I just feel like Mike has gay tendencies,” Sammi whispers. The music swells dramatically, and the Unit mists Axe body spray down onto his dick, forever.

Chain-smoking on the patio the next morning, the Situation gleefully informs Snooki that her drunken rudeness towards the Unit has all but sealed her fate with regards to their secret tryst. Shockingly however, the Unit accepts Snooki’s half-hearted apology and stays quiet about The Incident That Shall Not Be BAAAAAAAAAAAAAARF.  The Situation could not be more shocked and disappointed at this outcome. His entire reason for living another day was just taken away in an instant by a man named the Unit. Join the club, Mike. The club called America, where the beats are always searing and the weak-chinned grenades will always come for you, in time.