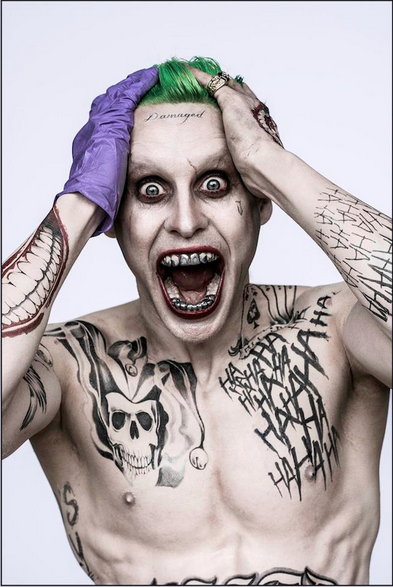 The legendary Batman foe the Joker made his first ever comic book appearance on April 25, 1940. To celebrate the 75th anniversary of DC Comics’ greatest villain, Suicide Squad director David Ayer offered up the first real look at actor/musician Jared Leto in the Joker role for the upcoming blockbuster film.

In addition to the Joker’s trademark green hair and red lips, Ayer’s version of the villain also features blackened teeth, dozens of “HAHA” tattoos across his body and ink on Joker’s forehead that reads “Damaged.”

The new Joker photo, as well as the blurry green-haired Leto photo where the actor aims his camera toward the viewer, are both inspired by frames taken from the classic graphic novel Batman: The Killing Joke. Considering that Ayer has twice hinted at that Alan Moore-written origin story suggests that Leto’s Joker will have more in common with the graphic novel’s rendition of the supervillain than the versions previously portrayed on the big screen by Jack Nicholson and Heath Ledger. In The Killing Joke, the Joker is introduced as a failed stand-up comic turned small-time hood who is chemically disfigured and driven insane all in “one bad day.”

Suicide Squad is due out August 5, 2016 and boasts an all-star cast playing DC Comics villains. Will Smith (Deadshot), Margot Robbie (Harley Quinn), Cara Delevingne (Enchantress) and Joel Kinnaman (Rick Flagg) and more will star alongside Leto’s Joker in the Dirty Dozen-inspired film about the incarcerated anti-heroes’ recruitment by the government for a suicide mission.

Suicide Squad will be the third film in the recently rebooted DC Comics cinematic universe, following Man of Steel and the March 2016-bound Batman v Superman: Dawn of Justice.