“We stay away from politics.”

You wouldn’t want to say that Robert Redford – screen legend, long-time environmentalist and activist, independent-film patron saint, possible contender for handsomest octogenarian alive – was being disingenuous, exactly. But when the founder of the Sundance Film Festival uttered that phrase at this year’s opening press conference, some 24 hours before a … let’s call him a “divisive figure” was to be sworn in as president, it felt a little off-brand. He clarified the statement by saying his main concern was staying “focused on the stories being told by artists” rather than positioning the event as dissent-central headquarters: “We don’t play advocacy.”

And even though he had offered to serve as a liason for potential protesters and Park City officials last month, the declaration felt more like benign diplomatic lip service. “Presidents come and go,” he said a few minutes later, except that in a week in which national endowments for the arts and humanities were under threat, confirmation hearings were held for a potential Energy Secretary who vowed to eliminate that department and the endangered species list may be in for a gutting, you can’t stay away from politics. It comes to you. Especially if you’ve spent much of your life giving social-advocacy docs a forum and giving a voice to the voiceless via a film festival.

So ok, maybe Redford didn’t want to turn the annual first-day remarks into Revolution Ground Zero or a redemption song. He could still make a statement through his programming. An 11th-hour addition to the fest, An Inconvenient Sequel: Truth to Power is the long-necessitated, if not particularly long-awaited, follow-up to his 2007 primer about climate change and how we can turn back the tides of destruction, literally and figuratively. Taking the stage at the Eccles Theater to officially inaugurate [cough, cough] the 33rd edition of the festival, the former Electric Horseman said that, some years ago, “politics and the Supreme Court were not too kind to Al,” and that drove the ex–Vice-President into the film world; he mentioned that Sundance had premiered the original 10 years ago and that he was proud to call Gore a friend. The comments thus suggested that a certain celebrity chumminess dictated the choice for Opening Night slot. But again: You do not accidentally kick off your annual gathering of the tribes with a movie about a man fighting for more Earth-conscious policies when we stand on the cusp of this guy becoming the E.P.A. head. Passive-aggressive resistance is still resistance. We are Rudy-clapping you right now, Mr. Redford.

As for the movie, An Inconvenient Sequel starts off on a beautifully discordant note, as sweeping nature vistas are accompanied by chorus-of-disapproval voiceovers calling climate change a fraud, suggesting that Gore is a charlatan and reminding us that Trump had called for the V.P’s Nobel Prize to be taken away. (Why yes, many of these sound bites did come from Fox News personalities, why did you ask?) From there, things proceed much as you might it expect it would: We watch Gore express dismay over melting glaciers in Greenland and flooded streets in Miami Beach. We see him take the stage at various conferences and powwow with Silicon Valley power players about cutting-edge solar energy devices. We see him drop science about “rainbombs” and mention how a montage of genuinely disturbing ecological catastrophes look like “nature haiku from the Book of Revelations.” There will be graphs, as well as a Justin Trudeau cameo. 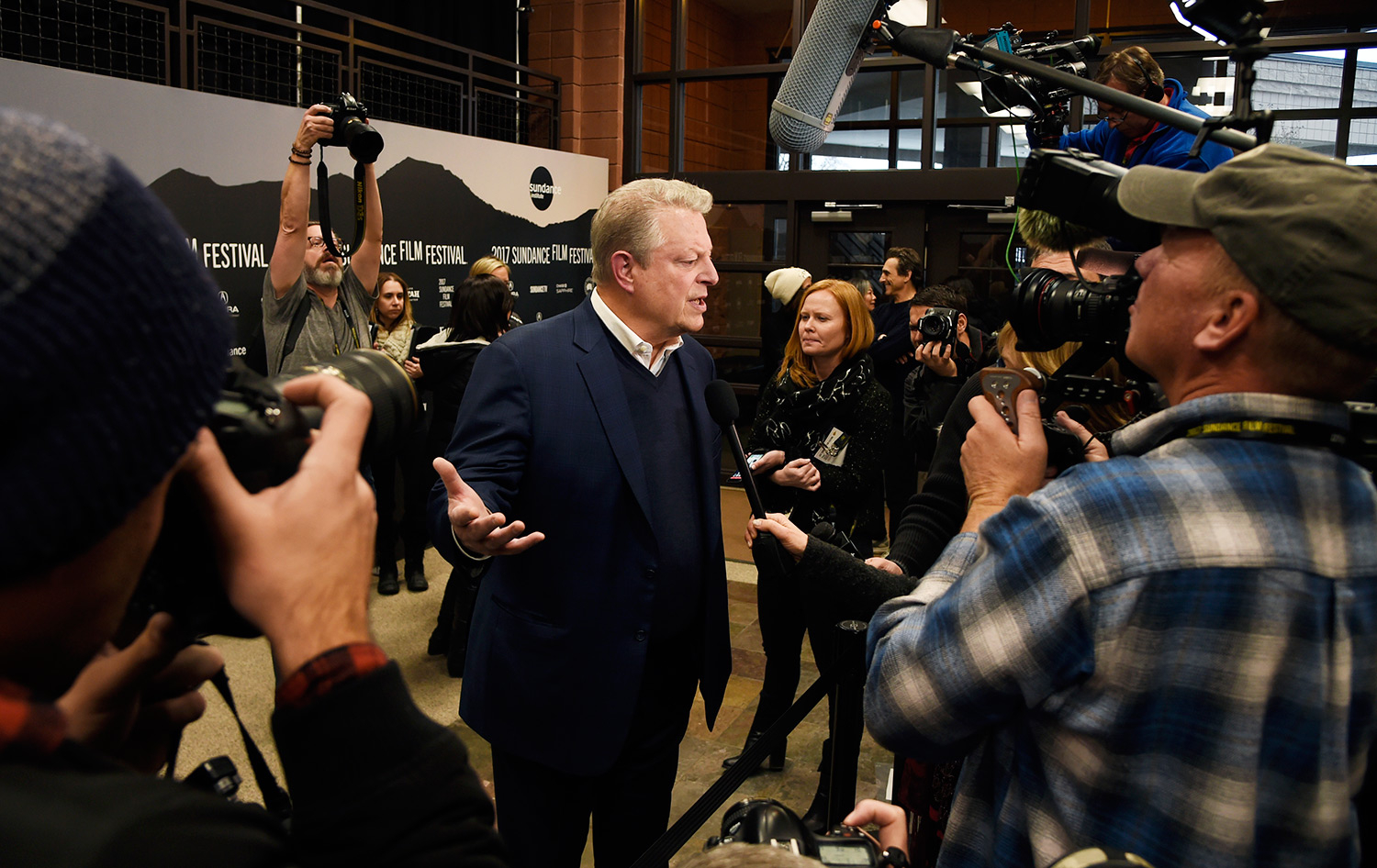 If this sounds like a cinematic serving of spinach, it is – like its predecessor, Sequel is unapologetically more concerned with advocacy than entertainment, and Gore’s screen presence is still dictated by the display of deep, deep concern and a cadence that suggests either in-progress somnambulism or that you’re about to be served some sweet tea. (A rage spiral during a lecture is communicated by his unflappable monotone merely going up in volume; his “I’m sorry you had to see that” apology to the audience may be the film’s greatest LMAO moment.) Directors Bonni Cohen and Jon Shenk are there to frame Gore’s worst-case-scenario travelogues in the context of bigger arguments regarding progress v. pushback. That many of the folks who need to be convinced that yes, this is an urgent issue will never bother to see the movie isn’t the point. The man is essentially preaching to the choir. Think of this movie as a tribute to the fact that he is still out there preaching nonetheless.

In fact, it’s the shadow narrative about Gore himself, the one that lurks within this follow-up and occasionally comes up for air, that is the more interesting film – a portrait of a man still tilting at windmills, often while repeating talking points about the benefits of wind power. The most compelling sequences involve Mr. Vice-President semi-opening up about his failed Presidential run, reading an old pros/cons list regarding his political ambitions from his daughter (“Too much social security around,” he quotes, referring to his kid’s accidental-Republican malapropism about the secret service) and trying to persuade a CEO to help the Paris Climate Agreement pass by sharing tech secrets.

Watching him throw his weight around in that one-sided phone conversation is telling; observing TV host Chris Hayes trying to get his guest to “commit news,” per the activist’s remark, by commenting on the 2016 election in exchange for air time even more so. “We will talk about climate change, right?” Gore asks. “I gotta feed the beast,” Hayes wearily replies. The ex-Senator knows how the game is played, how the sausage gets made, in the name of a cause. Those behind-the-scenes moments are worth triple their weight in Power Point presentations. Ditto him telling a reporter “Our democracy has been hacked.” The applause in the Eccles was momentarily deafening.

Once an epilogue posited Gore as the Johnny Appleseed of eco-warrior leadership, the credits rolled and the filmmakers filed onstage, it was merely a matter of waiting for the guest of honor to join them. And when Gore did, to a large standing ovation, he took the opportunity not to address the next day’s dread-inducing ceremony but to try and rouse the battered troops. “Damage has been done,” he said, not referring to anyone he may have had a meeting with in Trump Tower by name. The idea was not to wallow in already-in-abundance despair, he suggested to the crowd, but to remember that this is a long, hard, tooth-and-nail fight. Civil rights, gender rights and LGBT rights were not won overnight, he reminded folks, and neither will environmental rights.

“For those of you who have so much doubt,” he said to the hushed audience, “there are so many other folks who also want to make things better. The will to act is a renewable resource.” Like Redford, Gore stayed away from overt politics. But somehow, employing with that glorious nap-tempting baritone of his, he was able to channel genuine inspiration.