It was the jump that did it.

You know the one. It happens roughly a third of the way in to Fast & Furious 6. We’re already deep into a chase scene, one involving a mustache-twirling British bad guy, Michelle Rodriguez’s back-from-the-dead female badass Letty (she was never really dead, just had amnesia, but never mind that), Vin Diesel’s Dom Toretto, his crew, a load of cars and, of course, a tank. As this high-pursuit cat-and-mouse game whizzes down the road, Dom and the tank find themselves on parallel sides of a freeway; a huge gap with a long, long drop separates the two. The villain asks Letty (who’s been co-opted by this former U.K. black-ops guy, and is thus going against the family, but never mind that) to check on something outside the tank. She’s now on top of this 80 m.p.h. weapon-on-wheels. Bad guy starts rotating the turret, which means the lady is now facing her ex, who’s speeding 200 yards, 300 yards away, possibly more, on the other side of the chasm.

How 'Fast & Furious' Took Over the World

Spotting his true love perched perilously on a military assault vehicle, Dom does what most of us would do: He starts to shimmy out of his muscle car and balances himself on the windshield. (Who’s driving now, you ask? Maybe some sort of divine presence. Maybe the collective will of the people. Possibly Diesel’s agent. Why are you asking this?) Thanks to a series of insanely well-timed events, the tank flips ass-end up, hurling Letty into the air, and right towards the space between the lanes. Dom’s car has somehow now been maneuvered toward the guardrail. It crashes into the side. Dom flies forward. And for one glorious moment, the two are suspended in the heavens. Then he nabs her and the human-projectile duo rocket into a stopped car’s front window.

Words can’t do this justice. Just watch. Pause it at 2:38. Remember to exhale.

Forget, for one second, the fact that a movie originally about street-racing bros, and the women who love them, and the undercover cops who chase them (and then join them), had become a bona fide franchise with six entries. Forget that any semblance of the series’ original car-porn camp had already gone the way of the Yugo by this point, in favor of the ever-expanding crew going up against international criminals, drug lords and Dwayne Johnson’s biceps. This jump was the moment that the Furious films left any semblance of known reality behind. It’s the pivot point, the unabashed flipped bird to the world we live in, the one with laws of physics and probability, that either loses you or completely wins you over. If you were like me, your reaction went as follows:

1. “Get the fuck outta here. Get. The. Fuck. Outta. Here.”
2. “That was absolutely ridiculous. Really, profoundly, stupidly ridiculous. And transcendental. And ridiculous.”
3. “Why can I not rewind that and watch it again? Why does this theater not have that function?”
4. “Ok, I’m all in.”

One rewatching of the original The Fast and the Furious, several catch-up viewings of those earlier wonky-titled installments and one new entry later, I found myself embracing the joyously illogical, blissfully boneheaded, proudly deep-fried pop sensibility that propels what we’ll call the Furiousverse to keep on keepin’ on. And like a lot of folks around the world last weekend, I plopped myself down in a multiplex seat so that The Fate of the Furious could whisk me from Havana to New York to an icy, remote region of Russia with many consonants in its name, give me Charlize Theron playing a blonde, dreadlocked Bond villain (20 years ago, she would have just been a Bond “girl” – #progress) and occasionally drop in close-ups of a sneaker slamming down on an accelerator. A man buys a ticket to these movies to experience something as subtle as a prison riot, as subtle as Dame Helen Mirren with a Dick-Van-Dyke-as-chimneysweep Cockney accent, as subtle as a rainstorm of cars falling from buildings. The critic must be honest enough to admit that he is that man.

It’s not like critics haven’t been going to bat for these particular populist movies for a bit now, rightfully celebrating the fact that the series is the only behemoth franchise to genuinely reflect its own demographic diversity up on the screen, or that the films’ emphasis on “family” – the conceptual glue that holds the car chases, espionage hjinks and Corona-soaked sentimentality together – holds mass appeal in a morally muddled age. But for others [cue writer looking into a mirror], the notion that one can celebrate movies that traffic in such shameless over-the-topness and feature a lead who sounds like Sylvester Stallone with a cold requires jumping over a snobbery hurdle. The key is not to ask whether the Furious movies are high art. They are not, and no amount of “family”-friendliness or representation bona fides will make it so. (Though a serious kudos to the series on the second part – in front of and behind the camera.) The question is, what kind of low art are we talking about here?

And the answer that this filmgoer arrived at, after much handwringing and not a little bit of Tokyo drifting, was that they’re the kind whose sheer exuberance and giddy gusto in staging their demolition-derby set pieces, their soap-opera-on-steroids plot twists, their gearhead heroism and increasingly sillier superspy shenanigans, scratches an IMAX-sized itch. (The swerve into 007’s lane, by the way, isn’t coincidental. Even if you don’t think the  Benetton-Ad crew is a multicultural answer to James Bond’s white-guy colonial swagger, the Craig-era movies had been veering into grittier Bourne territory, and the Furious flicks have been happy to fill that mondo espionage hole.) The series thrives on an ability to keep upping the ante: You like a big, bald, buff action-hero dude? Here’s an even bigger, balder, buffer action-hero dude, and we’ll throw in a rough-trade British version to boot. You like tricked-up hot rods versus planes? How about tricked-up hot rods versus a nuclear submarine? The sky’s now the limit, and said sky may be filled with cars plummeting out of the back of a plane. 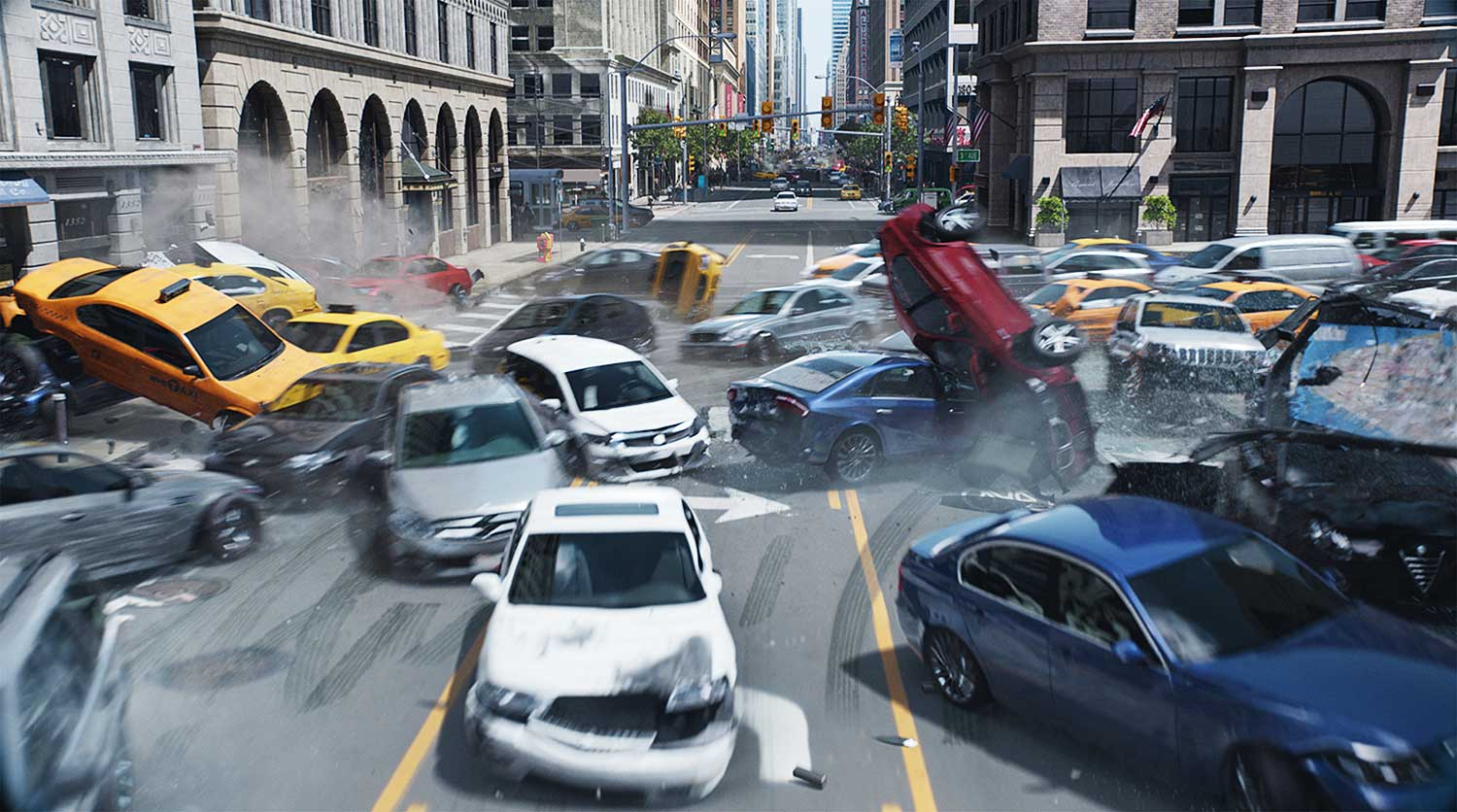 Once the Furious movies slipped the realism leash, they went from
being pulpy B movies to something like blockbuster superstores – a
one-stop-shopping center where you can sample Mission: Impossible-style assignments, MMA bouts (see Furious 7‘s
Michelle Rodriguez and Ronda Rousey’s formalwear tussle for a combo of
both), A-list action heroes, gunfights, analog stunts, CGI spectacle,
capeless superhero movies and a bit of broad comedy on the side. Fate
drops in disaster flicks as well: The sequence that comes closest to maximum bliss in the new movie
involves a bunch of remote-controlled cars slamming into each other around
a corner like a metal-on-metal tsunami. If Dwayne Johnson and Jason
Statham strong-arming their way through a jailbreak battle royale
doesn’t inspire slack-jawed awe, that pile-up will. Movies were vulgar
before they were poetic. Occasionally, you’re lucky enough to get both of those things in one single shot.

We go to different movies for different reasons, and we go to what’s classified as Big Dumb Fun films to satisfy appetites that, say, Sophie’s Choice, Shoah or Shoot the Piano Player don’t sate. (Though ideally, you’re an omnivorous filmgoer and you’re trying a bit of everything. Go eat some sushi and/or salad in between your greasy cheeseburgers.) Blockbusters these days usually bring the first two parts of that Big Dumb Fun notion and forget the crucial third element; too many of them are, to borrow a phrase from critic Matt Zoller-Seitz, something like “movie-flavored products.” The Fast & Furious films have managed to restore some of that surprising thrill, and do it in such a way that you can acknowledge how profoundly stupid they are at the core without negating the goofy joy of the ride itself. It wasn’t a resistance-is-futile giving up that convinced me; it was the ability to try leaning into the skid and seeing what might happen. And the result was the sense that, with the right amount of overkill, you can still wow folks. You’ll believe a Vin can fly.