How 'Fast & Furious' Took Over the World - Rolling Stone
×
×

The Fast & Furious has officially won the race.

Had someone told the world back in 2001 that a movie about street racers would not only give birth to a seven-film franchise but that it final entry would be considered a box-office breaking phenomenon, they would have been tomato-pelted out of the multiplex. But consider the domestic opening-weekend receipts for Furious 7 ($146.5 million) as well as its global haul (a whopping $384 million). And take note that the series has earned kudos in the pages of publications that would never appear in one of its films, beloved by pretty much everyone from Deadline to The New Yorker.

Amid the chorus of praise and populist hosannas, it’s easy to forget that Fast & Furious‘ critical and financial victory took almost 15 years to fully cement. It may have been decently successful at the box office, but the first film has a 53% rating on Rotten Tomatoes, where the consensus is that the movie “recalls those cheesy teenage exploitation flicks of the 1950s.” In a cultural moment characterized by reclaiming entertainment for teenagers and forcing it into the mainstream for serious evaluation, that now seems like a feature rather than a bug — like the cars that populate its movies, the franchise just needed to get a little momentum and a dose of nitro to get going.

Michelle Rodriguez: My Life in 10 Movies

Remember that the original story of The Fast and the Furious was that Paul Walker’s cop Brian O’Conner had to go undercover to catch Vin Diesel’s speed demon/criminal suspect Dom Toretto; the simplicity and faux-ambiguity of that mission is almost unrecognizable in comparison to the last couple of movies. In retrospect, the first F&F plays much like the origin story of a superhero team. And from the core of Dom, Brian, Letty (Michelle Rodriguez) and Mia (Jordana Brewster), the films have seen the accumulation of a crew, in a way that has been far more organic than the assembling of the Avengers. The series has its own mythos now, complete with interrelated villains, relationships complicated by everything from the government to amnesia, and various gold-hearted criminals with their own particular sets of skills.

It’s always been true that pulling together lots of successful actors often leads to similarly successful collaborations (see: the Ocean’s trilogy), but it also creates the potential for failure (see: He’s Just Not That Into You). Here, the assembled talent has gone from B-list forgettable to formidable: by now, the series includes not just Diesel, Walker and Rodriguez but Ludacris, Dwayne “The Rock” Johnson, Jason Statham, Tyrese Gibson, Kurt Russell, future Wonder Woman Gal Gadot and director Justin Lin, whose ability to ramp up the stakes and the stunts is the franchise’s secret weapon. Like any long-running series, F&F has its own set of rules now, the most important of which is: bigger is always better. Gravity is a nuisance that can be overcome. Revving engines and loud explosions are a universal lingua franca. 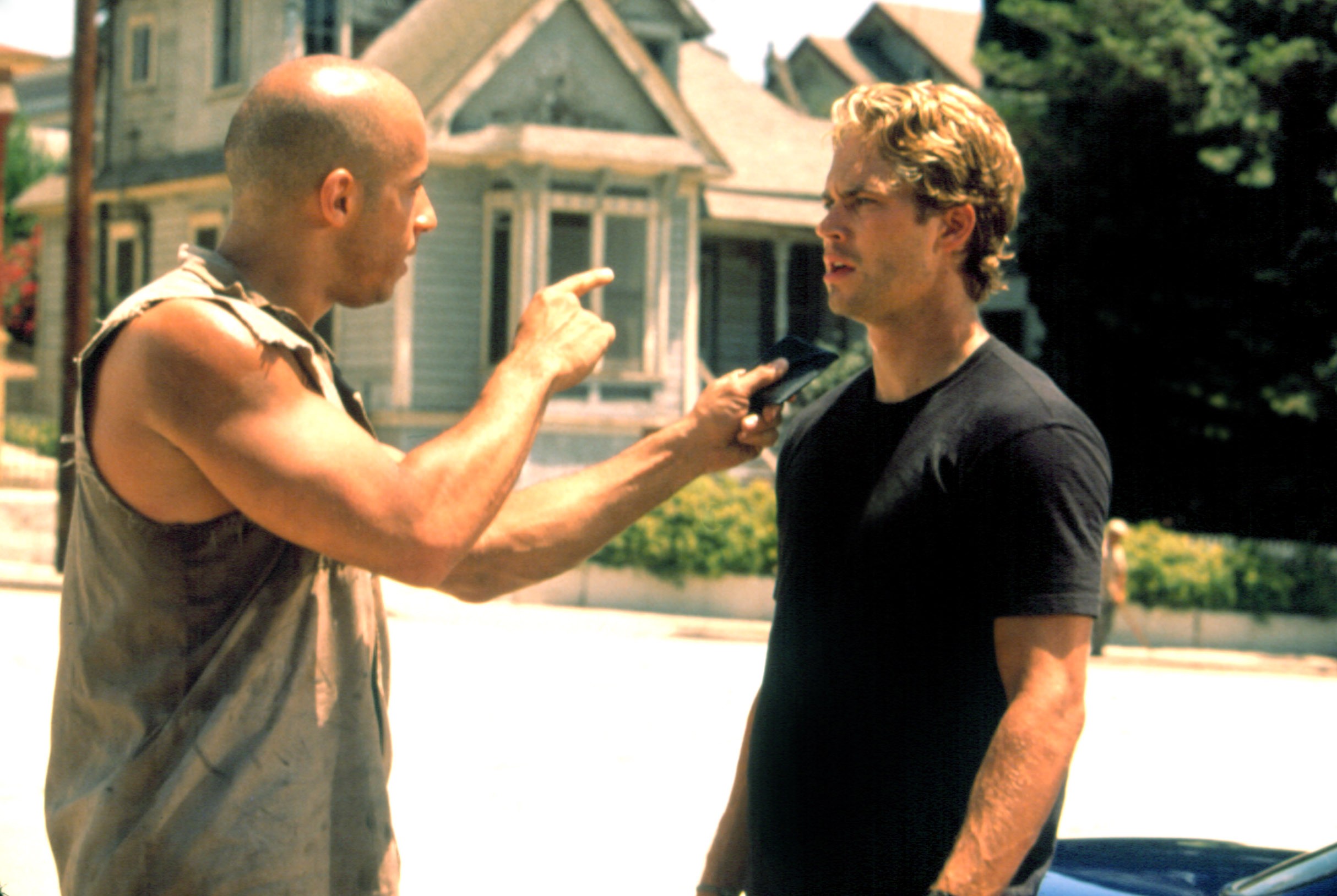 Still, reconsidering the earlier movies presents a kind of paradox: The Fast and the Furious works better as the first installment of a long-running, gasoline-soaked soap opera, but judging it as such at the time would have been premature, not to mention overly generous. (You can tell how much this has changed over time by looking at the original reviews — Entertainment Weekly‘s Owen Gleiberman gave it a C, comparing Paul Walker’s Brian O’Conner to Lance Bass and bemoaning how quickly the movie’s thrills zoomed by.)

Somewhere around Fast Five — when the series officially transitioned from just being about cars to bigger heists, more batshit top-this stunts and cars — Fast & Furious became a full-fledged player that announced its desire to park in the theaters for a while. The earlier films, it seemed, could now be reevaluated accordingly. Is Tokyo Drift really a good movie? Definitely not. But it works better as part of a whole, like some of the lesser Marvel movies — films that take on the qualities of an episode of television. And more than anything, being able to debate the relative merits of F&F movies highlights the way the franchise has become the modern equivalent of the Bond films.

Before you throw down your shaken, not stirred, martini in disgust, hear us out: The two brands share many of the same tropes (flashy cars, death-defying stunts, beautiful women), yet Fast & Furious is the true long-standing, ridiculous franchise for the 21st century. Instead of a middle-aged white dude going around acting out imperialist fantasies by shooting minorities and sleeping with whoever he wants, there’s a crew composed of Hispanic, black, Asian, and Israeli characters; its so inclusive that even it manages to fit in a token white dude. They have long-standing relationships that have built over the course of several films, and by now act mostly out of emotional obligation rather than because they have to do something boring like “save the world.” (As Casino Royale proves, the stakes in these sorts of movies are always higher when they’re personal.)

Besides, the series is well aware of the way it has leaned into these conventions — by No. 6, Tyrese’s Roman Pearce describes their work as “some 007-type shit.” Where the Bond mythos has often been suffocating, the F&F flicks have been free to turn into a pop culture vacuum, sucking up everything from standard heist movies to sitcoms and spewing them out under its checkered flag. Because it’s aware that bigger is and always be better blockbuster-wise, nothing is too ridiculous for a Fast & Furious movie. That might explain why it’s so much better than Vin Diesel’s earlier attempt at his own Bond rip-off. Where a potential XXX franchise might have taken itself seriously in the wrong way, Diesel has found his perfect role in Toretto, a man who can literally say that he’s going to complete “one last job” and have the results be awesome instead of terrible. (Should the success of the Furious movies mean that Diesel gets another shot at resurrecting his extreme-sports action-hero films, we reserve the right to retract all of the above.) 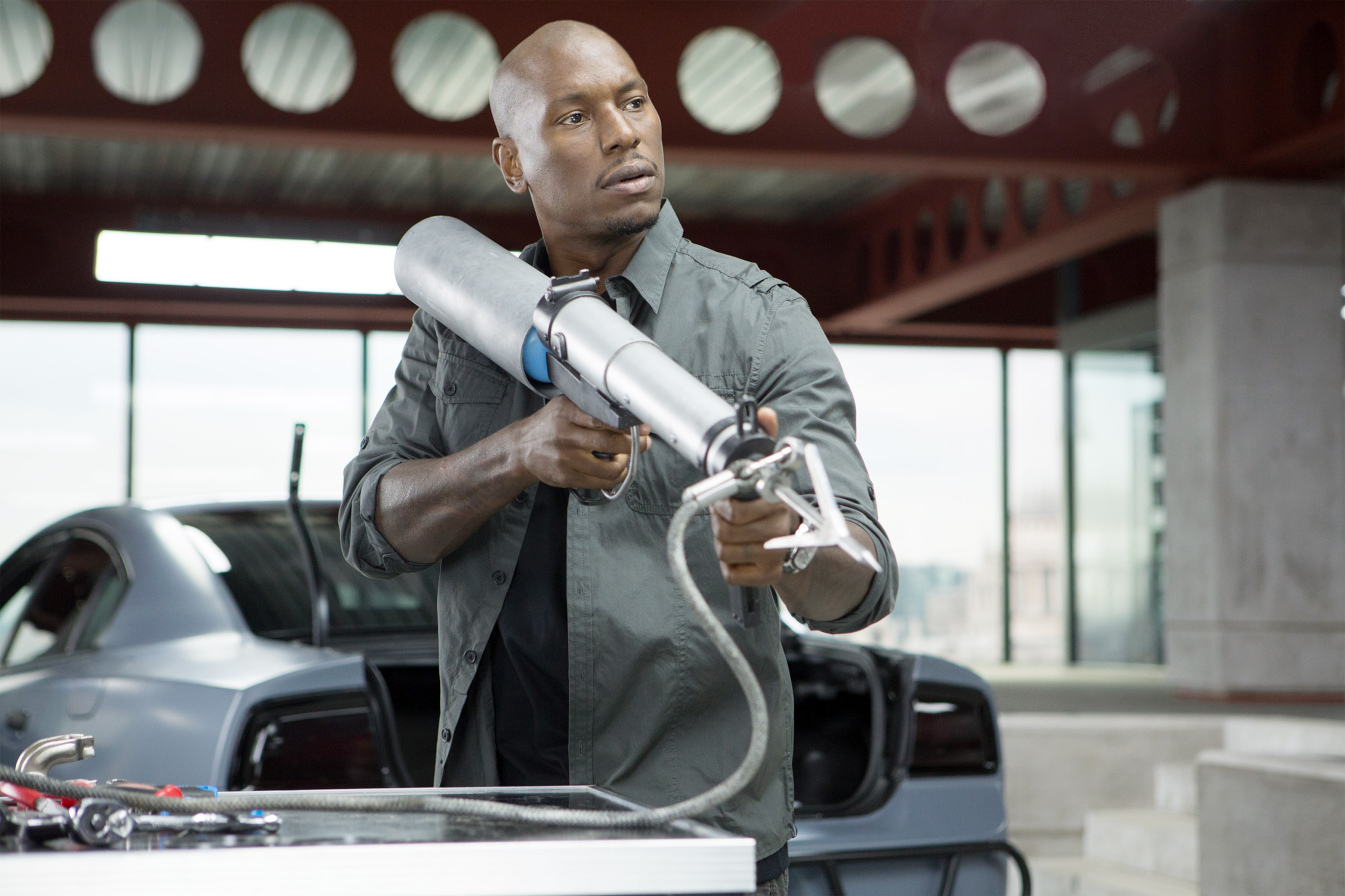 And then there’s the late-game introduction of The Rock, whose Hobbs enters Fast Five with the twin lines “I like her smile” and “Stay the fuck out of my way.” A former bounty hunter turned government agent who also helps car thieves sometimes, Hobbs is in some respects the apex of the way the franchise throws all sorts of genres together and blows them up. In an incredible (literally) behind-the-scenes anecdote, the wrestler-cum-movie star was reportedly cast at the suggestion of a commenter on Vin Diesel’s Facebook page — something that captures the populist spirit of the films.

Because more than anything, Fast & Furious is a franchise for the Internet, taking figures who have somehow become positively transformed into human memes and letting them destroy things with abandon. Fans raised with high levels of genre awareness can pick up on all of the elements being run together, and marvel at both the professional execution and the sheer WTF silliness. The spectacle not-so-subtly masks a core that’s deeply, profoundly conservative — a series of statements about the value of relationships and “family,” a word that’s uttered a lot. As much as the crew gets into illegal activity, they rely on each other and care about each other, which makes their criminal status unimportant. It renders them worthy of victory within the world of the films, making the crew an extended Toretto family rather than simply a collection of self-interested thieves.

Above all, the assembled actors and characters of the Furious-iverse have made that bond feel genuine; it’s one thing to mourn Paul Walker, who died in an unrelated car accident while filming was underway, and another to hear how “moving,” as many reviews have noted, the series real/reel goodbye to him is. Filmgoers are given a reason to be invested. You want to keep rooting for these people, whether it’s with ticket money or a glowing review. Sometimes, that’s all you need to win.