He made his first appearance in the comic book Strange Tales #110, cover-dated July, 1963 – a former surgeon turned “Sorcerer Supreme” who was billed as “a different kind of super-hero,” operating in a realm that’s much less the physical than the metaphysical. From the very beginning, Doctor Strange felt like an outlier in the interconnected men-in-capes world of Marvel Comics, though the character’s debut in the equally dense Marvel Cinematic Universe follows the company’s film-studio formula closely: Doctor Strange is an origin story, a love story, a framework for vintage pop songs and huge action set-pieces. Its visual effects are beautiful; its narrative style is very familiar. But, like the comics that inspired it, this story of a man traveling into the realms of the unknown also opens up new possibilities for the kinds of stories its fictional universe can contain.

At the time of Strange’s debut, Marvel Comics was a very small company, publishing about 12 comics a month, almost all of them written by editor-in-chief Stan Lee, with a few pinch-hitters including his brother Larry Lieber. To keep up the pace, Lee had invented what became known as the “Marvel style” of collaboration: instead of writing a full script, he’d discuss a plot with an artist, let them work out the story’s pacing and imagery, and then fill in the dialogue once it was drawn.

'Civil War' vs. 'Batman v Superman': What Marvel Is Getting Right

Marvel’s publishing lineup had been changing dramatically over the year leading up to that first Doctor Strange story. The Fantastic Four – the company’s first superhero series in many years – had been so successful that new costumed characters had muscled their way into the sci-fi/horror anthology comics that had formerly been the core of their line. Suddenly, they were everywhere: Iron Man now appeared monthly in Tales of Suspense, Ant-Man in Tales to Astonish, the Human Torch in Strange Tales, Thor in Journey Into Mystery. Romance and humor series like Linda Carter, Student Nurse (whose protagonist ended up having ties to Rachel McAdams’ character in the new movie, but that’s a whole other story) were starting to fall away. Even Amazing Adult Fantasy – apparently Lee’s favorite, consisting entirely of his unnerving collaborations with artist Steve Ditko – had mutated into another Lee/Ditko project, Amazing Spider-Man.

Lee had also started in on his great innovation, which Marvel Studios would pick up on almost half a century later: giving the company’s superhero comics a coherent shared setting, with events in one series having repercussions in others. (It helped that he was working with a very small pool of artists at that point: What the lightning-fast Jack Kirby couldn’t tackle was generally taken care of by Ditko, Don Heck or Dick Ayers.) The collateral damage that came with the superheroes’ arrival, though, was the lineup’s former eerie, uncanny tone, which was now M.I.A.

Strange solved that problem. By all accounts, the character was Ditko’s invention, although it’s unclear who came up with his name. He was briefly going to be the less catchy “Mr. Strange,” which was switched to “Doctor” in order to avoid confusion with the Fantastic Four’s Mr. Fantastic. Surprisingly, the change was considered slightly risky: Two years earlier, Lee and Kirby had devised the somewhat similar Doctor Droom, who had a somewhat less-than-stellar reception. (His tenure had lasted only five episodes.) And even though it took a little while for his feature to get off the ground, it’s remarkable how much of Strange’s iconography was already present in the first five-page story that Ditko drew, down to the skylight design that appears in his New York sanctum in both the comics and the film. 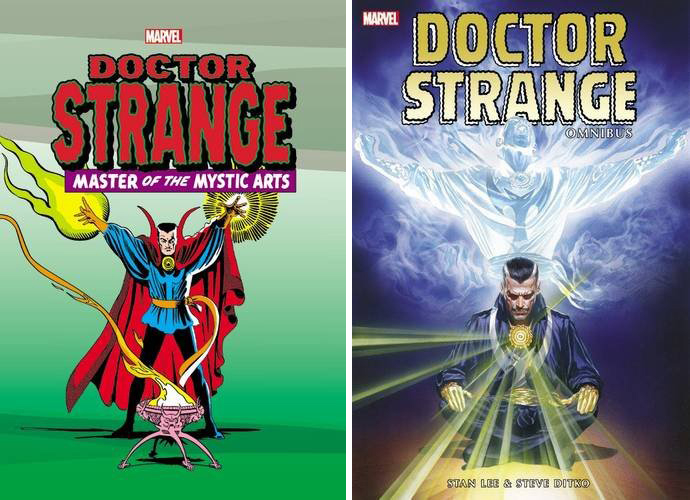 The cod-mystical language of the hero’s Strange Tales appearances was pure Lee showmanship: “By the omnipotent Oshtur! By the hoary hosts of Hoggoth! In the name of the eternal Vishanti! Begone!” But what made the series special was Ditko’s artwork: the floating, wobbly abstractions that made up his visions of other dimensions and mystical powers, the resonant body language and hand gestures of Strange and his enemies, the unforgettably weird character designs. And the one character who unequivocally looks better in the comics than in the movie is the monstrous Dormammu. Ditko drew his head as a gaping-mouthed mask composed of vertical lines and surrounded by flame; it couldn’t be simpler, and it’s more terrifying than anything a million dollars’ worth of CGI can create.

After his first pair of appearances, Doctor Strange took two issues off, then returned in Strange Tales #114; he appeared, mostly as the second feature, in all of the next 54 issues, after which the series was simply renamed Doctor Strange. (By then, both Lee and Ditko had passed the baton to others. Ditko had quit Marvel around the end of 1965; he’d return more than a decade later, but would never draw Doctor Strange or Spider-Man stories again.) The Doctor has had his own series on and off since then, and his most memorable starring roles have almost always gotten over on the strength of particularly idiosyncratic artists, including Frank Brunner, Marshall Rogers, P. Craig Russell, Emma Ríos and, most recently, Chris Bachalo.

But he’s also turned up hundreds of times in other characters’ comics, which is where he really shines. In the context of Marvel’s comic-book universe, Strange’s presence makes everything richer and more unsettling; even when a story takes place entirely in the quotidian world, we know as readers that there’s another, weirder world behind the veil of normalcy. (Fittingly, Stan Lee’s cameo in the new movie finds him chuckling over a copy of Aldous Huxley’s The Doors of Perception.)

The film has a similar role in Marvel’s cinematic universe. It’s a story that really only works in the context of a setting where we’ve already seen fantastical things happen – a stand-alone movie about an injured surgeon who goes to Nepal and discovers how to do magic wouldn’t fly on its own. Most of Marvel’s movies and TV shows, from Iron Man to Luke Cage, are about a familiar world augmented by extraordinary technologies and occasional inexplicable phenomena; the Thor movies introduce a second, mythological but finite layer of existence; Guardians of the Galaxy showed us what life beyond Earth looks like.

What Doctor Strange adds, though, is the idea that its shared fictional setting has aspects that defy understanding – that there are universes upon universes adjacent to the one we can perceive. The “infinity stones” subplot that’s been developing in the Marvel Cinematic Universe films for years, if it’s anything like the comics that inspired it, is heading for huge-scale metaphysical mindbenders. Doctor Strange is the key to getting it there. It’s where the film series opens the gateway to the infinite.