Six months ago, you might have called Benedict Cumberbatch one of the most impressive actors of his generation, British division. You could have referred to him as an Oscar nominee; a Shakespearean thespian; a solid supporting presence in prestige films like 12 Years a Slave (to jog your memory: he was the one who was not Michael Fassbender, Brad Pitt or Chiwetel Ejiofor); someone who has graced successful great-man biopics and and less-than-successful versions of the same; a sex symbol; and the third-greatest Sherlock Holmes of all time. (Or the best, assuming you are judging solely by the character’s inherent narcissism and OCD tendencies.) And, if you were like the 40-year-old self-deprecating gentleman himself, you may have added that he’s the performer who’s been told he strongly resembles a hammerhead shark, a “lizard man” or Sid the Sloth from the Ice Age films. All completely accurate.

How 'Doctor Strange' Went From Marvel Superhero to Movie Star

Now, after Doctor Strange basks in the glow of an $85 million opening weekend in the States and having racked in $240.4 million overseas so far, you may now safely say that Mr. Cumberbatch is both. It wasn’t like the actor was an unknown quantity, clearly; the BBC’s stellar Sherlock reboot essentially transformed him from Masterpiece Theater journeyman to “Internet’s boyfriend” obsession practically overnight. It also helped cement his screen persona as a hyper-intelligent, super-competent and ultra-arrogant genius (read: prick) who you nonetheless felt compelled to root for. Though Cumberbatch is talented enough to color outside the lines with the occasional beta male part, his best-known post-FOW (Friend of Watson) roles – Khan, Julian Assange, Alan Turing, even Smaug – all bank on those qualities, along with his signature combo of charm and chilliness. Only that Star Trek villain might have fueled a Benedict mob scene outside a Beijing multiplex if our man strolled by. Post-MCU induction, however, the game has changed. Cumberbatch will soon be able to carry a movie on his own, one that has nothing to do with antisocial computer geeks. And he has Marvel to thank for that.

He’s the latest example of being blessed by what we’re calling the Marvel Movie-Star-Making Machine, a byproduct of the comic book company/media behemoth’s world domination in which actors who range from name-recognized to nearly-nobody suddenly find themselves on a stage that paves the way to go supernova. You can essentially divide the phenomenon into three separate categories: There are the lottery winners, who go from zero to 60 thanks to nailing iconic, or at least nod-of-acknowledgement–inducing, characters (maybe you can’t remember which hunky Hemsworth is Chris, Liam or Luke; or that Chris Evans was who you’d cast if Channing Tatum wasn’t available and you didn’t want Seann William Scott – but say Thor and Captain America, and we’re all on the same page). There are the established performers, who get a chance to simply play action hero (Paul Rudd) or get molded into one (Chris Pratt, more on him in a second).

And then there are the stars who class up the MCU joint, so to speak, and wind up getting upgraded to superstars in the process. They are both benefactors and beneficiaries here: By lending a sense of legitimacy, for lack of a better word, to all of the pop sound and fury of these too-big-to-fail endeavors, they walk away with stratospheric exposure. The ne plus ultra of this is Robert Downey Jr., who injected a loose-cannon edge to the massive gamble that was 2008’s Iron Man and ended up with bragging rights on empire-kickstarting and an eventual payout that ones associates with pharaohs. Scarlett Johansson curls up in a catsuit on a chaise lounge in this category; Mark Ruffalo and Don Cheadle hover somewhat on the periphery, brows furrowed. And Cumberbatch falls squarely in this section, someone with a track record, a rabid nickname-ready fanbase, an egghead hotness – everything except a sky-high Q rating. If you build the right branded vehicle, however, that will come. Welcome to the Avengers-assembly-line, Benedict.

The temptation, in fact, when the Strange announcement was made was to think of the coup as a form of nerd-approved stunt-casting. You could instantly picture Cumberbatch’s long, high-cheekboned mug sporting the debonair mustache and grey temples, perched above the high-collared red cloak. (That garment, by the way, is the Fred Astaire to his Ginger Rogers in the film; they could take their slapstick double act on the road.) He already looked like a Steve Ditko character from certain angles, or, if you’re a comic reader of a certain age, like a dead ringer for the Paul Smith version of the mystic do-gooder. Fans knew they’d be getting a spiky, smart, savvy take – the Sherlock model of the Sorcerer Supreme. All Marvel had to do was not hire someone from the Zack Snyder Pump Up the Volume School of Superhero Filmmaking and ruin everything; thankfully, they didn’t. They also stocked the supporting cast wisely (Swinton! McAdams! Ejiofor! Mikkelsen!!!) and added just enough blotter-sheet weirdness into the mix to distinguish the movie from your average blockbuster. But this is Cumberbatch’s show. The movie might have worked without him. It would not have worked as well.

So yes, we may decry the fact that another great actor gets sucked into the maw of the Marvel corporate machine, and while Cumberbatch gets locked into a multi-movie contract (he’s already scheduled to appear in the next Thor and Avengers installments, and you do not need the Eye of Agamotto to see Strange sequels on the psychedelic horizon), there are the speculative great films that won’t be blessed with his plummy tenor and sense of intellectual superiority. But the hope is that, thanks to these tentpoles bumping him up to it’ll-play-in-Peoria A-list status, Cumberbatch will be able to get several of those projects out of limbo and onto production schedules by sheer clout. That’s the delusional hope, anyway – that by making these movies better, he will have the chance to make better movies overall. Superhero fans will always have Doctor Strange, and the rest of us who like a well-balanced cinematic diet may get films that send us dimension-hopping in completely different ways. Forget the Ruby Rings of Raggadorr; how about the power to greenlight? 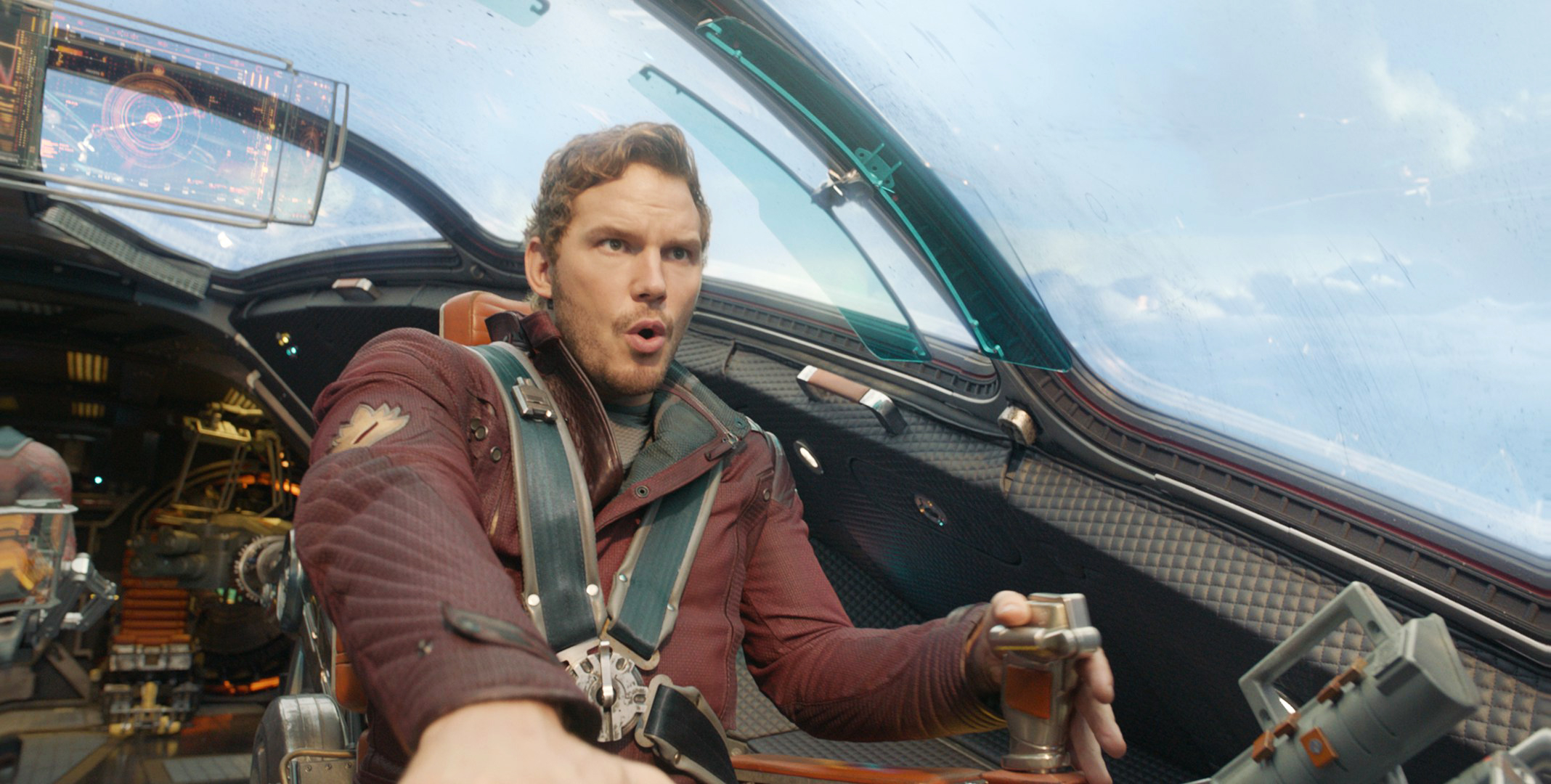 Or maybe we’ll end up with a Cumberbatch who, in a few years from now, will have used these movies to tap into some creative realms he (and we) didn’t even know were there. While waiting for the release of Doctor Strange, two Marvel superhero-movie trailers scheduled for 2017 – one MCU canon, one not – dropped on the Web and had geek-culture pundits chattering. The first was for Guardians of the Galaxy Vol. 2, which promises more cosmic derring-do, classic rock tunes and, most importantly, more Chris Pratt 2.0. You could watch the entire minute-long teaser and forget that, once upon a time, Pratt was strictly comic-relief fodder; now, one space opera and dino safari later, he’s the closest thing we have to a modern Harrison Ford-type. Marvel was the one who discovered his inner alpha wisecracker/swashbuckler. We owe them a debt.

The second trailer was for Logan, what we’re promised will be the absolute last-time no-takebacks iteration of Hugh Jackman’s Wolverine, the stand-out of Fox’s X-Men films. That first movie featured a somewhat stiff, believably surly actor who, over the last decade-plus, slowly grew into the role; like George Reeves, Adam West and Christopher Reeve, he’ll always be associated primarily with his comic-book counterpart, but you can see how he’s turned this fan favorite into a far more fleshed-out protagonist. This final hurrah features the older, battered hero in his autumn years, taking on one last job to save a younger mutant. The clip promises lots of berserker rages, leaping into frays and the usual set pieces you associate with these movies. But even in the dialogue-light preview, you notice how Jackman imbues this character, who’s come close to calcifying into a cliché numerous times, with a gravitas and palpable sense of tragedy – the admantium-clawed warrior in repose. The old Jackman wouldn’t have been (and wasn’t always) capable of that. The actor that the role has helped shape? He is. If the genre is ever going to do anything besides mint money, it’s going to start with investments like these.