How Do You Solve a Problem Like 'Isle of Dogs'? - Rolling Stone
×
×

When you see Wes Anderson’s Isle of Dogs, which opened in a limited run and will go wide this weekend, you will undoubtedly be bowled over by the sheer imagination and technical chops on display. You will thrill to the extraordinary stop-motion animation – the director’s first return to the form since his 2009 near-masterpiece Fantastic Mr. Fox – which not only makes sure each strand of fur seems tactile but lets you see the soul behind its canine characters’ eyes. You may shudder at the way the movie portrays a futuristic dystopia in which, thanks to a “snout fever” epidemic, all dogs living in a fictional Japanese metropolis are banished to a broken-down quarantine area known as “Trash Island.” You’ll chuckle at how well chosen the celebrity voices are, ranging from the director’s usual suspects (Edward Norton, Jeff Goldblum, Bill Murray, Tilda Swinton) to Wes-World newcomers (Bryan Cranston, Scarlett Johansson, Liev Schreiber). You’ll even nod approvingly at the fact that, though this painstakingly detailed, delicately crafted pup fiction has been years in the making, its messages about government-sanctioned ostracization and communal resistance could not feel more timely.

You may be so overwhelmed by all of the handcrafted, exquisitely curated bric-a-brac and the kennel’s worth of doggy stylistics that, if you are like me, it may not occur to you until after you’ve left the theater that the Japanese characters do not really speak.

Oh, they do talk, mind you, the noble scientists and student activists and corrupt government officials and the 12-year-old boy named Atari (Koyu Rankin) who crash-lands on Trash Island in search of his beloved M.I.A. pup Spots. But, as we’re informed in a disclaimer at the beginning, there will be no subtitles for their dialogue. Viewers can more or less make out what they’re communicating via gesture and expression. Occasionally, a translator played by Frances McDormand will provide running commentary, and a righteous, American exchange student voiced by Greta Gerwig will fill in the blanks. The dogs speak Recognizable Movie-Star-ese. The human residents of Megasaki City, however? They are not burdened with the sort of heavy-accented pidgin English that often passes for “foreign” in movies. They are not blessed with being deciphered or understood, either.

It’s just one of the more puzzling examples of the film’s cultural borderline personality disorder, one that’s sparked a debate around Isle of Dogs that started before the movie’s premiere at the Berlin Film Festival in February, began gaining steam as early reviews rolled in and reached critical mass when Twitter became involved, because Twitter. You do not need to own a Filmstruck account to recognize its hodgepodge references to Japanese movies, ranging from Akira Kurosawa’s golden period (the soundtrack borrows selections from The Seven Samurai and Drunken Angel, though surprisingly not from Stray Dog) to darker works like Kon Ichikawa’s Fires on the Plain. The city’s mayor was specifically designed to resemble actor Toshiro Mifune; the director himself has mentioned animation godhead Hayao Miyazaki’s work as being a major influence as well. One of his cowriters, Kunichi Nomura, is a Tokyo-based media personality. There are bona fides, in other words.

But there are differences between Japanophilia and cinephilia, just as there are differences between paying tribute to a foreign culture and using what you’ve gleaned about a country from watching its movies as some sort of exotic backdrop. And therein lies the problem. I love so much in Isle of Dogs. I am moved by it. So why do I find myself cringing so hard at the way it reduces an entire nation’s history and character to the equivalent of an album’s deep-cut? Yes, it’s easy to read what Anderson & co. are doing as an homage to his hermetic ideas about the land of the rising sun rather than a racist Orientalism caricature along the lines of, say, those old Fu Manchu movies of the 1930s or Mickey Rooney’s buck-toothed landlord from Breakfast at Tiffany’s. (We’re not dignifying this with a link, you’ll have to seek out this atrocity yourself.) It’s a little harder to acknowledge that there’s a tourist-y tone-deafness that comes as part of the package. Harder, but necessary. You don’t get one without the other here.

It’s not the first time Anderson has been accused of dabbling in a sort of benign Criterion-Collection colonialism – rewind back to The Darjeeling Limited, and you can see how his dandy-curator aesthetic risks turning everything into part of his moving vision board. The longer you watch Adrien Brody, Owen Wilson and Jason Schwartzman traipse around India on a train, the more you sense the limitations of Anderson’s curiosity about his locale. This is a movie in which the second most populous country on Earth becomes a personalized grief-travel brochure straight outta someone’s DVD shelf: Hey, I’ve seen Renoir’s The River and own Satyajit Ray’s Apu box set, so what else do I need to know about the place, right? It may have felt more blatant in Darjeeling because of the live-action element; in Isle, there’s so much going on in its stop-motion frame, and so much anthropomorphized animal action pinging back and forth through mountains of perfectly arranged debris, that such cultural short-shrifting simply becomes part of the wallpaper. 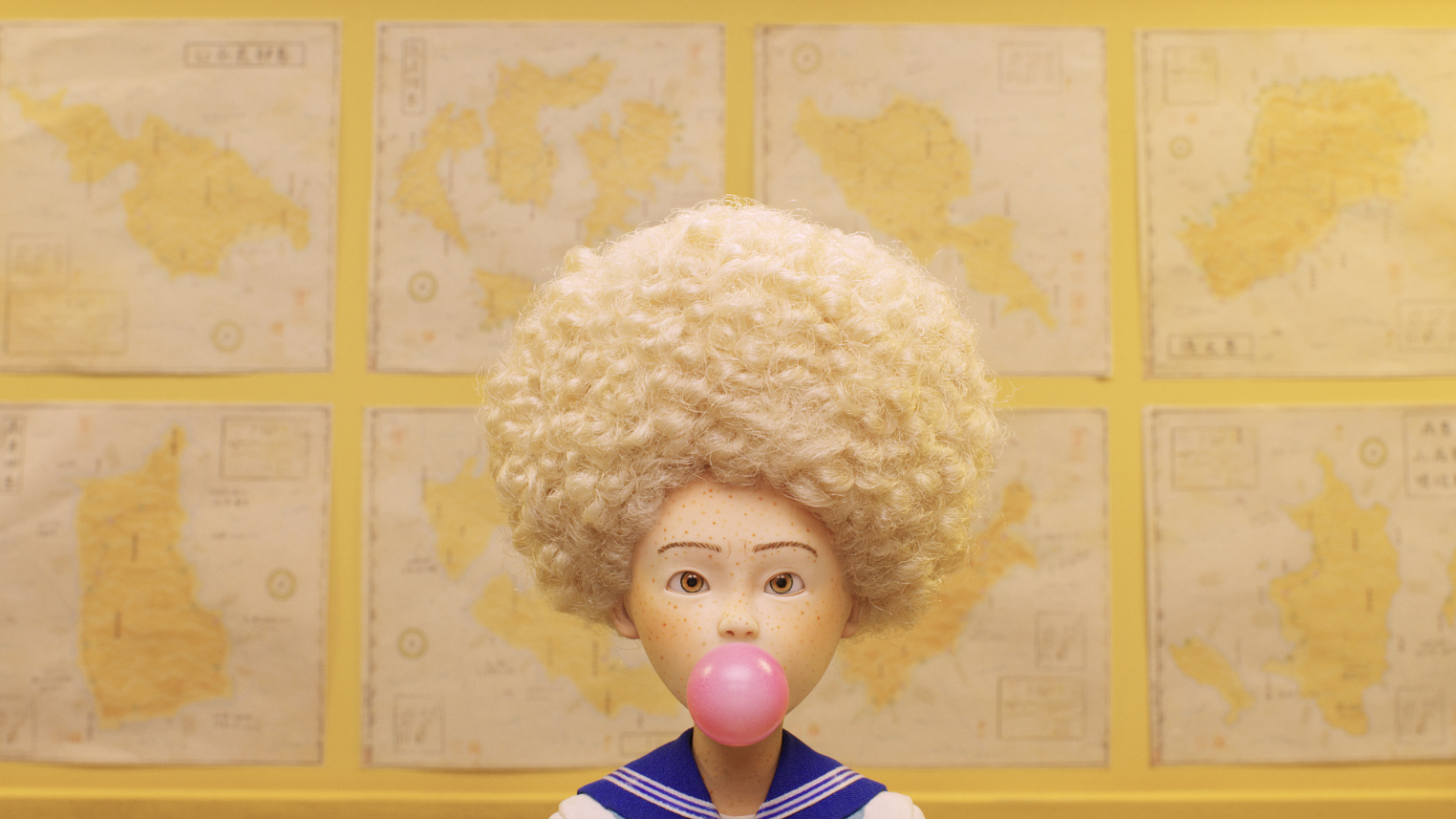 Asked why he wanted to make this movie, the director said that he remembered seeing a sign for a road called the Isle of Dogs in London; he had also been talking about making a movie in Japan, so he and his writing buddies just decided to combine the two. The blitheness behind its conception shows as much as the brilliance of the film’s look, with critics left to parse which side of the scale hangs lower. Some have focused on the signature Andersonian clutter and the deadpan humor; others have pointed out that Gerwig’s character, the resident Max Fischer-esque busybody, is the dictionary definition of a “white savior” and noted that when a massive mushroom-clouded explosion plagues the island, the filmmaker is “circling a profundity he doesn’t know how to handle.” Some have made eloquent cases for questioning its cons and paying due lip service to its pros (see: the Los Angeles Times’ Justin Chang and The Ringer’s K. Austin Collins, the two must-read reviews on the film to date). Still others have gone into jihad mode and waged scorched-earth social media campaigns. The Internet responded in kind. What’s supposed to be a darker-than-usual kids’ movie has become a serious check-your-privilege point of contention.

Which begs the question: Is Anderson’s sci-fi fantasy, one that takes place in a clearly fictional future-shocked world but that still draws on Japanese artwork, cinema and signifiers, a work of cultural appropriation? At the very least, it risks coming off, to use Chang’s term, as culturally insensitive. And while it’d be great to think that some young viewer might see this and immediately feel compelled to watch Ikiru or start taking taiko drum lessons, there’s very little sense of anything being given back. Anderson is welcome to mine inspiration from wherever he so pleases. But you do not have to give the movie a thorough wokeness audit to feel that something is missing – that for all of the creativity and community here, for the breadth of its ambition and attempts to foster interspecial bonding, it occasionally feels like it risks devolving into a canine version of Hello, Kitty cutesiness.

All of this went through my head as I wrestled with my feelings over a film that felt made for me on so many levels and yet was causing such conflict in my head. So I went and caught a second screening on a Sunday afternoon, to see if the movie still struck the same chord that it did a few weeks back. And as I walked out, I thought about Anderson, a filmmaker whose work I’ve always admired, and how no one thought to suggest that his love letter might be misread. I thought about film critics, how thankful I am for the good ones who really know how to see the big picture, and the need for more who aren’t just white, male auteurists. (Full disclosure: It, me.)

A scene from Wes Anderson’s return to animation, ‘Isle of Dogs.’ Watch below.