It’s bad enough to be a werewolf, hunted by the light of the full moon. But to be a foreign werewolf? That’s beyond cruel. An American Werewolf in London squirms with comic unease from the get-go, and almost immediately from its release 35 years ago — August 21st, 1981 — the bipolar horror-comedy has been celebrated on two impressively different fronts: as a landmark in startling makeup effects that legitimized the gross-out, and as a riotous piece of fish-out-of-water college humor. Calling the film a sick joke is perfectly apt. It’s a sweaty, shuddery experience, one that coaxes cringe laughs in equal measure as jump scares (often in the same scene).

But in other ways, this cult movie remains underappreciated, its hyperrealism coexisting with a weird impulse toward glibness and sarcasm. It starts on the foggy English Moors, in a pub filled with scowling darts players. At the Slaughtered Lamb, there’s a pentagram on the wall and people mind their own business. Everyone hears the unearthly howl outside: an echoey, shredded shriek that’s one of the most disquieting noises ever supplied to a Hollywood film. (Several animals’ wails were manipulated in the sound studio to create it.) But our heroes are a pair of dumb schmucks who’ve seemingly wandered into this old-school Hammer Horror setup directly from their dorm room. Already, we’ve heard them crack wise about sheep and Debbie Klein’s majestic body. Finally, one of them blurts out: “Excuse me! What’s that star on the wall for?” Silence.

Empire of the Sunglasses: How 'They Live' Took on Republicans and Won

13 Horror Filmmakers You Need to Know

Writer-director John Landis, previously of Animal House and The Blues Brothers, knew this scenario firsthand. In 1969, he was that 19-year-old kid abroad, working as an assistant on the Yugoslavian set of Kelly’s Heroes, ingratiating himself with Don Rickles and Donald Sutherland, and gawking through his own Ugly American episodes (one of them involving gypsies warding off the undead). Landis got those ideas down in script form, which he then shelved for years. By the time his cameras rolled, An American Werewolf in London had evolved, ultimately becoming the most exquisitely neurotic — and expressly Jewish — movie in the horror canon. It’s not your typical werewolf bar-mitzvah, but then again, maybe it is. 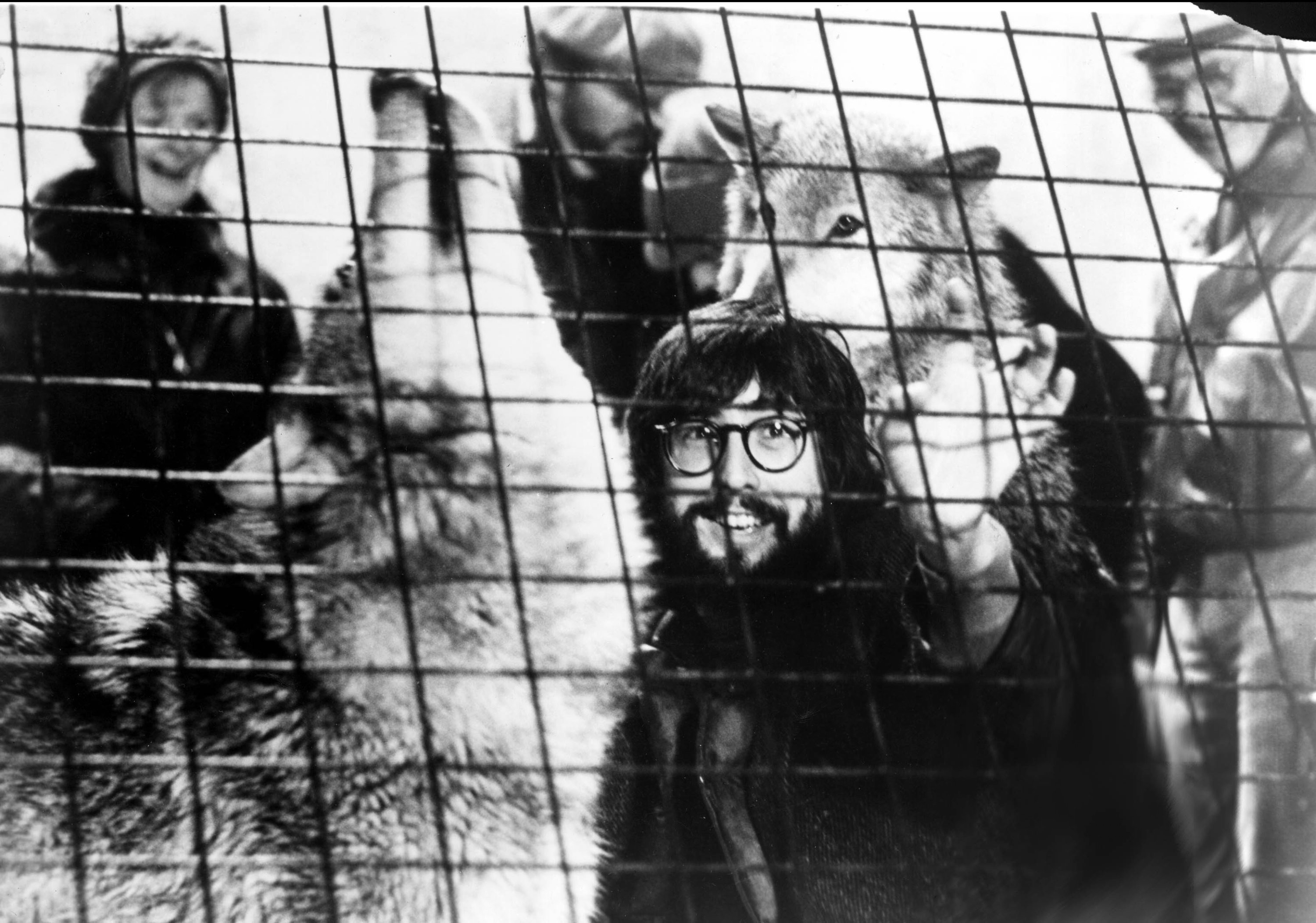 “I think he’s a Jew,” one nurse says, looking over the slashed, unconscious body of David Kessler (fresh-faced Dr Pepper pitchman David Naughton), still in the hospital three weeks after an attack by a so-called escaped lunatic. How does the nurse know? She’s taken a look, she admits. When David comes to, he’ll be wracked by visions that make his underlying persecution complex clear. In a killer dream sequence, his Long Island home is savaged by a squad of throat-slashing Nazi demons who mow down his younger siblings with machine guns. David is also paid regular visits by the decaying Jack Goodman (Griffin Dunne), the college friend killed on the North York Moors, just as chatty as ever — even as awful flaps of torn flesh dangle from his throat.

Hiding a secret deep within one’s body, strange urges, xenophobic glances, accusatory feelings of guilt: David’s condition already has a name, and this won’t be the first film in which Jewish otherness is made monstrous. (Not incidentally, the first werewolf hit, 1942’s The Wolf Man, was based on an original script by Curt Siodmak, a German Jew who fled Joseph Goebbels.) For Landis, that’s part of the comedy: David is conspicuously out of place because he’s a hairy beast among stiff, proper English people. What makes An American Werewolf in London different, though, and more sympathetic, is the way David becomes emboldened by his new condition: Soon, a cute caretaker (Walkabout‘s Jenny Agutter) will bring him home for sex, stealing his NYU T-shirt like new girlfriends do — she finds him very attractive and a “little bit sad.”

Landis wasn’t the guy you thought of for an allegory of exoticized Jewishness — he was one of those bearded movie brats then taking over the industry. (He gave his look-alike pal, Steven Spielberg, a cameo in The Blues Brothers.) Still, the director’s commercial instincts dovetail nicely with the suggestive script. His snarky pop soundtrack is the film’s first in-joke, loaded stem to stern with moon songs. Three different versions of “Blue Moon” compete for ear space, along with Van Morrison’s “Moondance” and, famously, Creedence Clearwater Revival’s jangly “Bad Moon Rising.” The artists that declined Landis are equally as revealing of the director’s ambitions to make this gag work: Cat Stevens, Bob Dylan, Elvis Presley.

Something Landis wouldn’t give ground on would be his movie’s knockout of a centerpiece: a human-to-wolf transformation set in a brightly lit living room that would end up revolutionizing the horror field. As early as 1971 and the making of his first feature, Schlock (don’t bother), he was working with the up-and-coming technical wizard Rick Baker. Both men loved old-school effects, Lon Chaney movies, the dare of showing the unshowable. When the money finally came through for An American Werewolf in London, Baker had to farm out a job on The Howling — which went to his protégé Rob Bottin, later of John Carpenter’s gooey The Thing — in order to properly commit to the months of planning that would result in two-an-a-half minutes of final footage. (This was in an age long before digital effects.)

Watch the transformation again and it’s amazing how funny it is, each beat maximized not for nausea but laughs. Lupine hairs rustle audibly like a shag carpet; vertebrae bones crack into place with a satisfying chunk. Hands and feet extend painfully. Naughton himself sells the effect with panicky screaming (he even gets a joke in, “I didn’t mean to call you meatloaf, Jack!”), flopping on his back awkwardly as his legs dance the crab. Jaws and mandibles extend — Baker is climaxing here — and finally we’re left with a quadrupedal hairy torso quivering by a bunch of throw pillows.

Baker’s work would be impossible to ignore, winning Oscar’s first competitive award for Best Makeup, a newly created category after an outcry went up over the prior year’s The Elephant Man getting stiffed. The transformation has become the film’s claim to fame: a perennial clip in special-effects reels, and the mainstreaming of Fangoria-stoked appetites.

Still, Landis sticks to his secret story of a stranger in a strange land. David is a Jewish dude running through a zoo clothed in a sweaty sheen and nothing else. (“A naked American man stole my balloons,” a little boy deadpans, nailing the idea.) Again, there’s that edge of sadness that Alex noticed, as David calls home to say goodbye to Max and Rachel — those are the names of Landis’ own kids. And by the time the filmmaker orchestrates his chaotic endgame in Piccadilly Circus (a rare permit was secured on the strength of The Blues Brothers‘ meticulously planned automobile anarchy), David is literally snapping at the heels of polite society, when he’s not snapping off heads.

An American Werewolf in London was far from the first horror-comedy. You can find comic steam releases in classics as early as James Whale’s The Old Dark House (1932) and Bride of Frankenstein (1935), not to mention Mel Brooks’s parody Young Frankenstein, still in recent memory at the time of London‘s release. But Landis’ movie may be the first movie to laugh at the plight of a nebbishy outsider bitten by a dog. The movie’s savage violence (that severed head bouncing off the car hood, the terrible roar in the alley) seems to have allowed for some weirder ideas to sneak through. Michael Jackson was a superfan, hiring Landis for his 1983 “Thriller” video, and it’s fascinating that the pop star resonated with this particular werewolf movie, obliquely about someone trapped in their own ethnicity and transformed into a scrutinized object.

For Landis, it was an unquestionable high point, one he never equaled. His fearless confidence with action scenes would be shaken forever after his next project, Twilight Zone: The Movie, dealt him an on-set catastrophe for which he never accepted culpability. Many of his famous friends abandoned him after that helicopter disaster (including Spielberg), and his retreat into breezier comedies shows his edge sanded away. He’ll will always have An American Werewolf in London, though: deeply personal, conceived in a teenage moment of promise and touched by a sense of the cursed.