Over the last several years, Henry Rollins’ acting career has accelerated, starting with a season-long arc on Sons of Anarchy in 2009. Since then, he’s booked guest spots on the Hawaii Five-0 reboot and The Paul Reiser Show, as well as a slew of voice-over gigs. This week marked a new chapter in Rollins’ ever-evolving career in film — he just wrapped shooting his first starring role in He Never Died, an indie film that just wrapped in Toronto. Rollins plays Jack, a guy who struggles with cannibalism.

“This is why the script has so much appeal to me,” Rollins tells Rolling Stone. “He’s just bored of everything. He has to subsist on bags of blood bought from interns that smuggle it out of a local hospital while they’re in med school.” 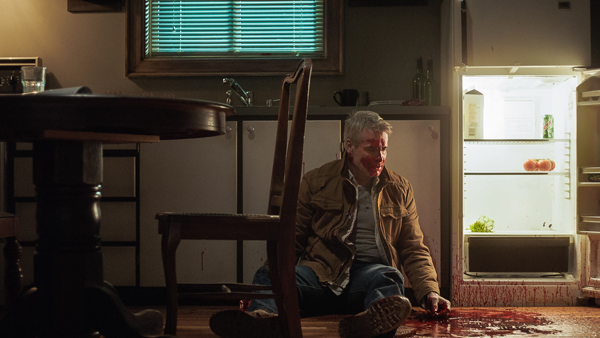 The plot is being billed as a modern-day crime thriller, and Rollins jumped at the opportunity to play the lead role. “I’m usually rarely around at the end of a film to be at the wrap party,” he says. “I rarely survive. I’m usually killed off or eaten by something, or arrested.”

Although Rollins has never taken an acting class, he credits his years of stage work performing spoken word as a critical factor in helping him not only to memorize and deliver lines, but to nail the lengthy passages that a lead would undertake. “I just do all this stuff by knowing what I know from being on stage all my life and having material in my head that I bark out onstage for any particular tour,” he says. “Doing all that kind of memorization stuff which I usually do for tours helps with all of this.”

While the film just completed shooting, there’s no timetable yet for release, but the plan is to roll it out on the summer/fall 2014 festival circuit.