'Green Room': Inside the Skinhead Siege Thriller of the Year - Rolling Stone
×
×

Near the beginning of Jeremy Saulnier’s Green Room, Anton Yelchin’s guitarist explains to an interviewer why his band doesn’t have a social media presence: “When you take it all virtual,” he says, “you lose the texture.” Not long after that, Yelchin’s band, the Ain’t Rights, find themselves barricaded backstage at a neo-Nazi compound in the Oregon woods, after a last-minute gig culminates with the discovery of a freshly killed corpse. A slow-burning, no-frills siege thriller, Saulnier’s follow-up to his 2013 breakthrough movie Blue Ruin has plenty of texture, but its long fuse is attached to a powerful charge: Once Yelchin and his bandmates discover the depth of the trouble they’re in — and the machetes, pitbulls and shotguns come out — this modern exploitation-movie insta-classic hits the gas and doesn’t ease up until the last body has dropped.

“I don’t listen to punk that much now,” admits Saulnier, a 39-year-old married father of three and Virginia native who used to frequent Eighties and Nineties hardcore gigs. “When you’re so immersed in a scene and it’s so definitive to who you are as a person — and there’s no archive of it other than your fading memories — it’s kind of disturbing.” When he was writing the script, the filmmaker spent months reaching out to comrades from his punk-rock past, collecting touring anecdotes and unreleased demos; much of the Ain’t Rights’ musical repertoire is taken from his old friends’ bands.

Creating that anarchic energy on set was another matter. Alia Shawkat, who plays the band’s guitarist and de facto road manager, says that the cast would do jumping jacks before takes, hyperventilating or forcing themselves to cry in order to work themselves into the properly beleaguered state of mind. “At the end of every night, we were tired,” she says. “But it felt great,” she says. “He really exhausted everything.”

In a sense, Green Room‘s protagonists could be any group of unsuspecting strangers from out of town — the latest version of the road-tripping twentysomethings in The Texas Chain Saw Massacre. But for Saulnier, the movie is as much about the exhaustion of punk’s once-vibrant energy as it is the evils of the extreme political right. The Ain’t Rights, he explains, “are kind of scavengers trying to find the remnants of a once-vibrant subculture. When Pat says ‘you gotta be there,’ that’s 100 fucking percent true. Hardcore is about the experience and participating. When I was introduced to punk rock, it was skateboarding, clocking the T-shirts of the cooler, older kids, trying to remember band names, going home, telling my mom to drive me to the record store, please, picking out the band that I thought was the one that I thought I saw on the T-shirt, buying it, committing to it, taking it home — and then you’d fucking hear what you bought. This is an old man getting nostalgic, but that’s why the scene thrived. Now, you can just sit at home and click.” 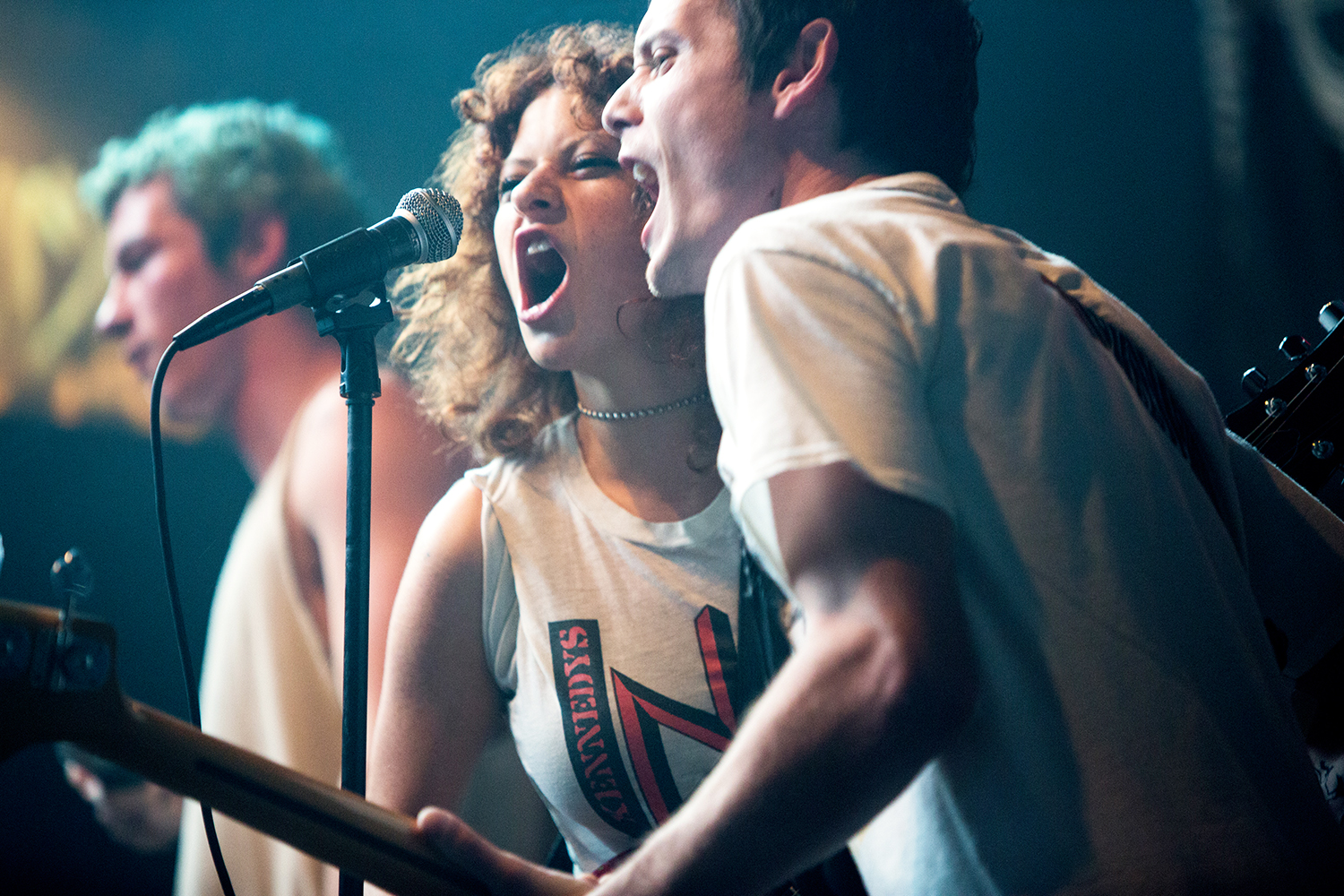 Yelchin, who played guitar in a punk band called The Hammerheads, says that feeling still thrives, although you have to seek it out. “We live in a culture where it’s all about posting that moment, so you let other people know that you are doing this thing,” he says. “It’s like if there’s not some cheap photo posted of the moment, it’s like it didn’t happen. If you go to a punk show, and those kids are actually there for the music, a lot of those kids don’t have their phones. They’re in the pit, being silly.”

After Saulnier gathered together his group of young actors and put them through a sort of punk-band bootcamp, he needed to find the perfect embodiment of evil; enter Patrick Stewart, who plays the neo-Nazis’ charismatic, cold-blooded leader, Darcy Banker. In a frenetic movie, Darcy is an oasis of apparent calm, never raising his voice even when he gives the order to kill. He’s persuasive enough to rally young people to his cause, even when it’s not clear what that cause is — “they’re right-wing skinheads,” one character explains, “or technically ultra-left” — and to convince the imprisoned band members that they actually have a chance to talk their way out of this mess. “When Darcy says, ‘It’ll all be over soon,’ that always makes me laugh,” Stewart says. “It’s said in a way that’s completely reassuring, but what Darcy means by it is completely different.”

“The things that have always frightened me were not zombies or vampires. It was people, real people, who were of a mindset and an attitude that no matter what the situation you find yourself in, you couldn’t reason with them.”—Patrick Stewart

Stewart is famous for playing men who lead with their heads instead of their guts: When asked who would prevail in a fight between James T. Kirk and Jean-Luc Picard, his answer is that Picard would persuade Kirk to settle their differences without resorting to fisticuffs. Darcy presents himself as a kindred spirit to his Star Trek: The Next Generation captain and the X-Men’s leader Charles Xavier; the big difference between them and his white-supremacist figurehead, besides the fascist leanings, is that he’s only pretending to listen to his opponents while he figures out the best way to cut their throats.

For Stewart, the contrast was terrifying, so much so that he took a break from reading Saulnier’s script to lock the windows in his house. “The things that have always frightened me were not zombies or the walking dead or vampires,” Stewart explains. “It was people, real people, who were of a mindset and an attitude that no matter what the situation you find yourself in, you couldn’t reason with them. You couldn’t sit down with them, have a cup of coffee, and say ‘Let’s talk this over.'”

“That’s the thing that’s scariest to me in reality,” says Shawkat. “It’s not zombies, it’s not aliens. It’s people who exist who hate each other so much. And sadly, they are going to rallies now, and being filmed on television.”