Winning a Golden Globe doesn’t have the same cachet as getting an Oscar or an Emmy, but the awards ceremony itself is often more entertaining, for one big reason: It’s unpredictable. The stars are boozed-up, the atmosphere’s informal, and the outcomes are … well, sometimes pretty bizarre. The Hollywood Foreign Press Association is a small organization, and keeps both its membership and its voting practices shrouded in mystery. It’s often hard to make sense of its choices, because shadowy cabals would rather not explain themselves.

The best any intrepid prognosticator can do, in fact, is to try to discern some patterns. For example. when it comes to the motion picture categories, the Globes function in part as an Oscar rehearsal, giving the year’s most obvious front-runners a chance to practice their speeches and to secure their positions on the road to the Academy Awards. But the HFPA also likes to make movie stars happy, and has been known to honor actors like Tom Cruise and Leonardo DiCaprio well before Oscar voters do. On the television side, meanwhile, the Golden Globes seem committed to zigging where the Emmys zag — always looking to be the first to spot the next hot property rather than handing out prizes to the same shows year after year.

With all that in mind, and with the caveat that this year’s batch of Globe nominees is one of the craziest and most infuriating in recent memory, here are some reasonable guesses as to what’s going to happen this Sunday night. 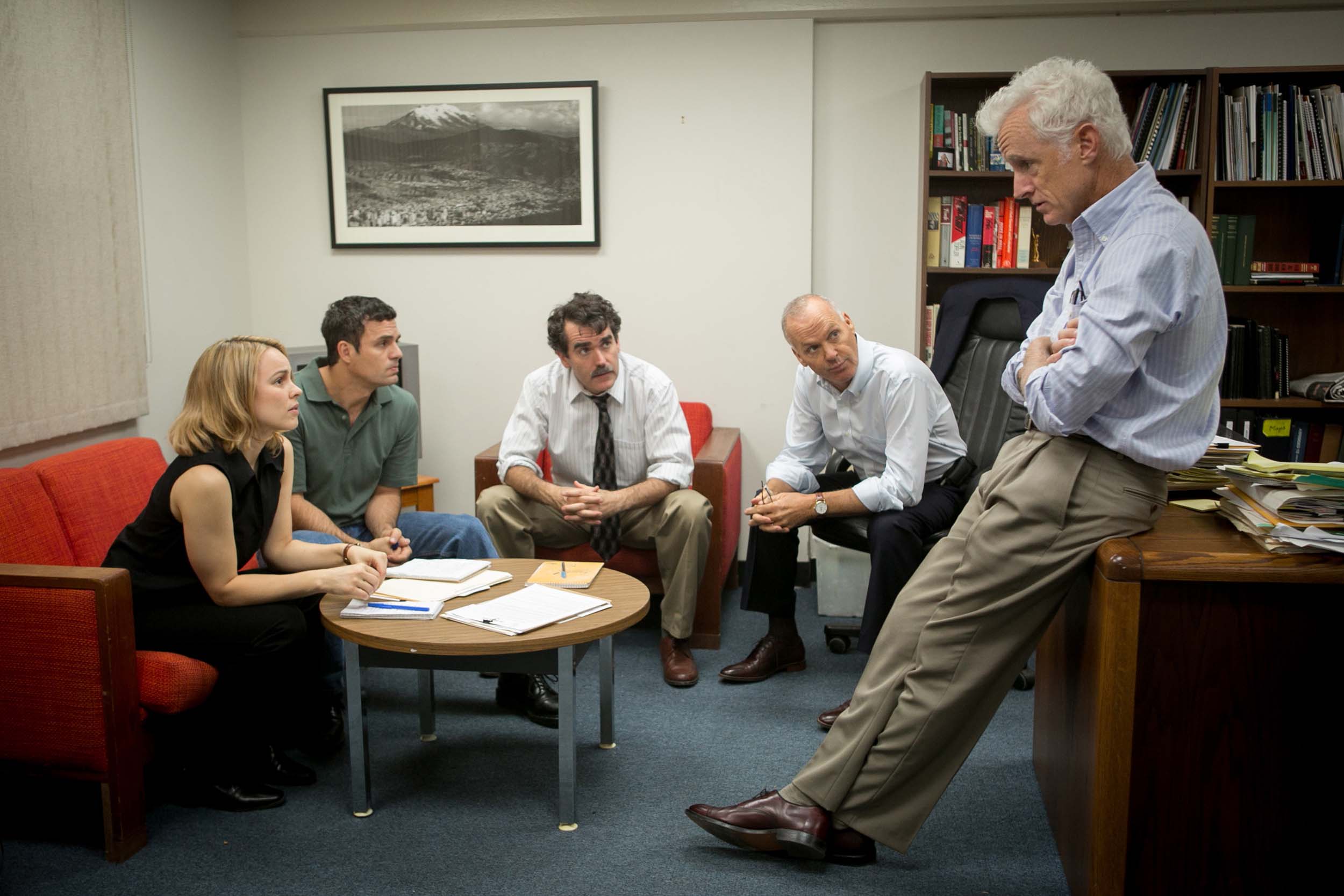 Best Motion Picture, Drama
Nominees: Carol; Mad Max: Fury Road; The Revenant; Room; Spotlight
Prediction: Spotlight
This is one of those categories where the HFPA tends to fall into line with every other significant awards-giving body, and since this well-crafted, star-studded drama about investigative journalists has racked up win after win, it seems highly probable that the producers will have to make room for a Golden Globe on their shelf — and then an Oscar a month later.

Best Motion Picture, Musical or Comedy
Nominees: The Big Short; Joy; The Martian; Spy; Trainwreck
Prediction: The Big Short
The comedy prize is supposed to allow the Hollywood Foreign Press to salute a film that couldn’t crack the notoriously humor-averse Academy Awards ballot, though more often than not, the prize goes to the most prestigious movie that’s kind of funny. Only two of these nominees are straight-up comedies; and neither of those is favored to win — which means the real competition here is between the lighthearted science-fiction adventure and the disturbingly bleak economics lesson. The latter has the edge, if only because its creative team is bound to give a more exciting speech. 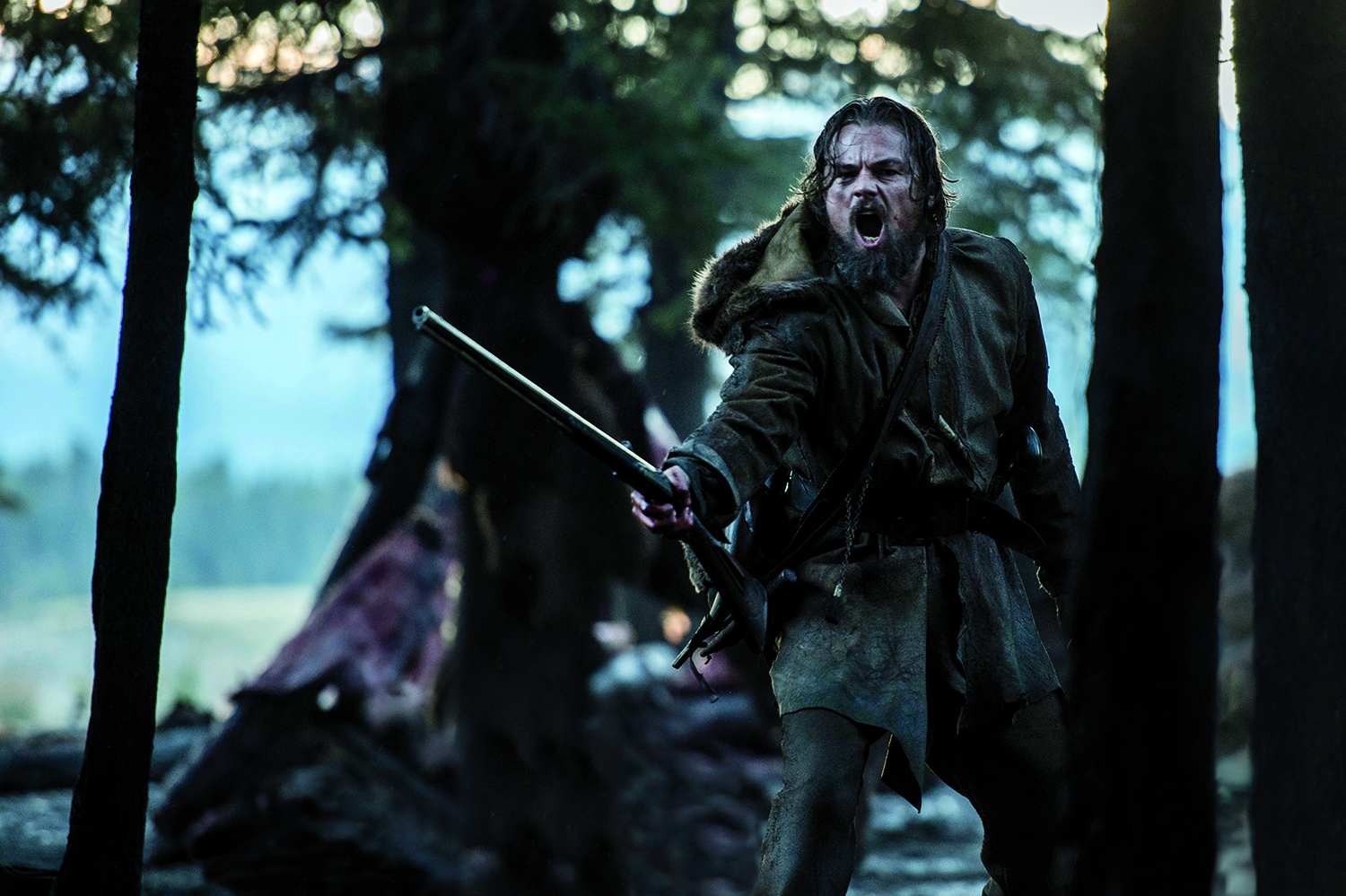 Best Actor, Motion Picture Drama
Nominees: Bryan Cranston (Trumbo); Leonardo DiCaprio (The Revenant); Michael Fassbender (Steve Jobs); Eddie Redmayne (The Danish Girl); Will Smith (Concussion)
Prediction: Leonardo DiCaprio
How ironic would it be if in the year when DiCaprio finally won an Oscar, the Globes stiffed him? That could definitely happen, since, unlike the Academy, the HFPA doesn’t have to make up for any past slights here. The real wild card is Cranston, who’s making a smooth transition from TV to movies. But the more predictable outcome is that one of this awards’ longtime favorites nabs another trophy.

Best Actress, Motion Picture Drama
Nominees: Cate Blanchett (Carol); Brie Larson (Room); Rooney Mara (Carol); Saoirse Ronan (Brooklyn); Alicia Vikander (The Danish Girl)
Prediction: Saoirse Ronan
First off, kudos to the HFPA for not buying into the studios’ ridiculous efforts to pretend that Mara’s a supporting character in Carol or that Vikander’s not the co-lead of The Danish Girl. Maintaining some category integrity makes this one of the night’s most competitive awards, and one that could easily go to any of these ladies. The usual Globes metrics suggest, “When in doubt, go with the ingenue,” but that doesn’t really apply when four out of the five actresses could be described as an up-and-comer. Call this one a toss-up then between Larson and Ronan — with the winning side weighted a little more to the Brooklyn lass, because her movie is, shall we say, more user-friendly in terms of subjects.

Best Actor, Motion Picture Musical or Comedy
Nominees: Christian Bale (The Big Short); Steve Carell (The Big Short); Matt Damon (The Martian); Al Pacino (Danny Collins); Mark Ruffalo (Infinitely Polar Bear)
Prediction: Matt Damon
Good cases could be made for any of these gentlemen. Bale stretches to play a financial genius with a social disorder. Carell balances wit and rage in a part that’s even better than his acclaimed Foxcatcher turn last year. Ruffalo could win as a kind of combo award for this movie and Spotlight. And Pacino is Pacino. But can you believe that Damon’s never won a Golden Globe as an actor? This feels like his year, for a likable performance in a movie that doesn’t really fit well into any category.

Best Actress, Motion Picture Musical or Comedy
Nominees: Jennifer Lawrence (Joy); Melissa McCarthy (Spy); Amy Schumer (Trainwreck); Maggie Smith (The Lady in the Van); Lily Tomlin (Grandma)
Prediction: Amy Schumer
The easy pick here would be Lawrence, who has the showiest role in the “classiest” of these five movies, and who has two Globes already. But this is where the voters’ love of the new may come into play. McCarthy gave by far the funniest performance of this bunch, but thanks to Trainwreck, Schumer really cemented her place as on of this generation’s brightest and savviest comedians. She’s the hippest choice.

Best Supporting Actor, Motion Picture
Nominees: Paul Dano (Love & Mercy); Idris Elba (Beasts of No Nation); Mark Rylance (Bridge of Spies); Michael Shannon (99 Homes); Sylvester Stallone (Creed)
Prediction: Sylvester Stallone
Okay, forget Best Actress in a drama; this is the most stacked category. Rylance has the momentum, having already won a lot of other awards for his role as a stoic secret agent in Bridge of Spies; and Dano does the best work of his checkered career playing the young Brian Wilson in Love & Mercy. Plus on any other year, Shannon and Elba would be handed statuettes just on general principle. But next to newcomers, the HFPA likes comeback stories, and Stallone’s beautiful performance as a fading Rocky Balboa in Creed is one for the ages.

Best Supporting Actress, Motion Picture
Nominees: Jane Fonda (Youth); Jennifer Jason Leigh (The Hateful Eight); Helen Mirren (Trumbo); Alicia Vikander (Ex Machina); Kate Winslet (Steve Jobs)
Prediction: Alicia Vikander
Leigh’s phenomenal in The Hateful Eight, but it’s a tough film that’s noticeably absent from most of the other major categories. Vikander’s great too in Ex Machina, and an award here could be something of a consolation if she fails to win Best Actress for The Danish Girl.

Best Director
Nominees: Todd Haynes (Carol); Alejandro González Iñárritu (The Revenant); Tom McCarthy (Spotlight); George Miller (Mad Max: Fury Road); Ridley Scott (The Martian)
Prediction: George Miller
Because the Globes voters like to share the wealth — and because the one consistent knock against Spotlight is that it’s not very visually striking — this could be where Carol or Mad Max gets some love. Bet on the latter, which has been a satisfying, surprising interloper throughout this awards season.

Best Animated Feature Film
Nominees: Anomalisa; The Good Dinosaur; Inside Out; The Peanuts Movie; Shaun the Sheep Movie
Prediction: Inside Out
The Hollywood Foreign Press could always get cute and give the arty, very adult Anomalisa an award. But in a way, Pixar has made the voters’ job easier by producing a masterpiece. It’s easier to make the unchallenging call when it’s for a movie as brilliant as Inside Out.

Best Drama Series
Nominees: Empire; Game of Thrones; Mr. Robot; Narcos; Outlander
Prediction: Mr. Robot
In the past, the Globes have been better at recognizing our current golden age of television than the Emmys have. But this year? Let’s just say that as good as most of these nominees are, collectively they don’t really capture what was a fantastic 2015 for TV. It’s hard to read the HFPA’s mind here, but Mr. Robot would be a gutsy selection — and the organization does like to be bold. 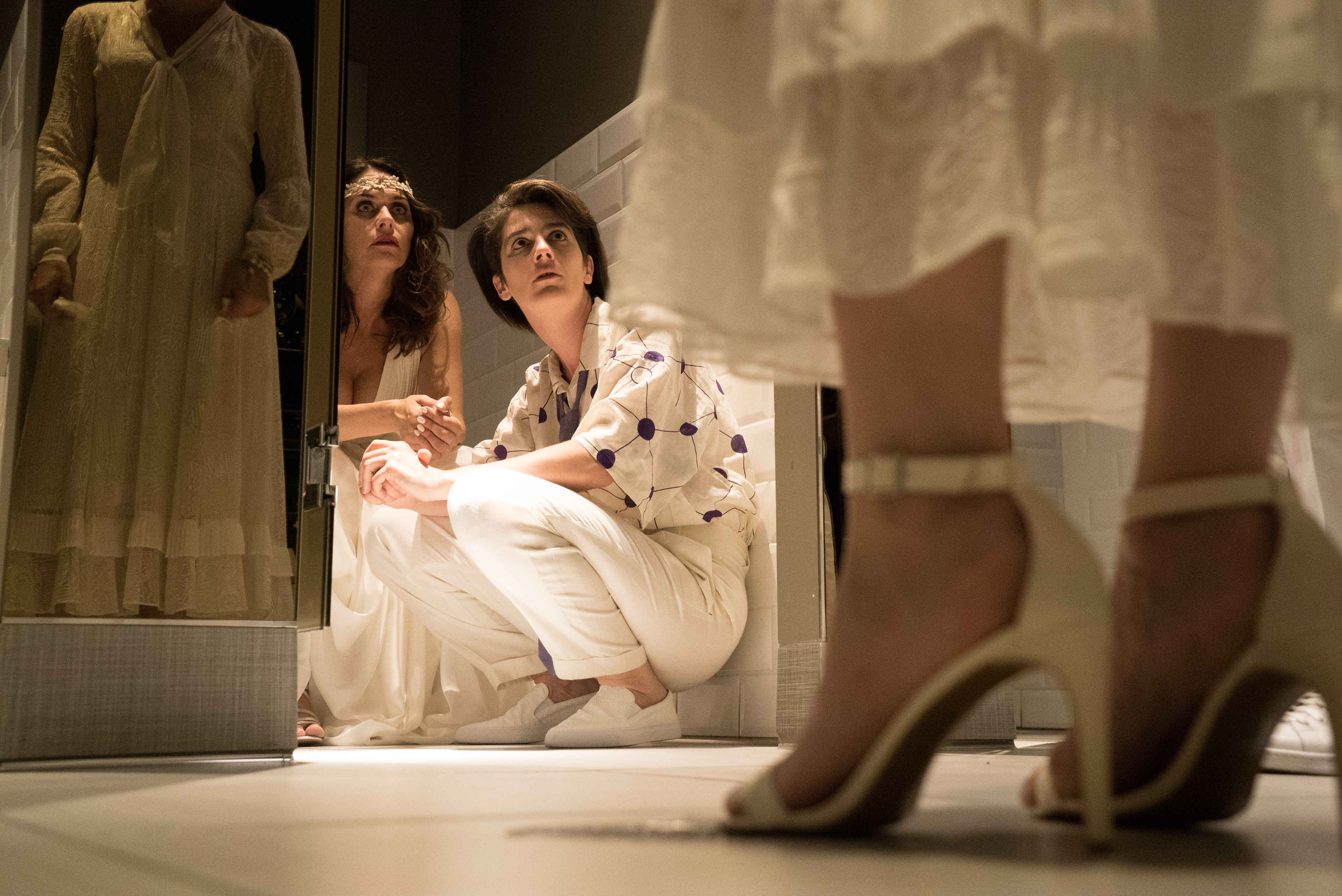 Best Comedy Series
Nominees: Casual; Mozart in the Jungle; Orange Is the New Black; Silicon Valley; Transparent; Veep
Prediction: Transparent
This slate’s even funkier than the one for drama, and even further removed from reality, failing to reflect the outstanding crop of comedies on the air right now. Repeat Globes are fairly rare, but last year’s winner Transparent will likely be an exception — especially since its second season is even better than its first.

Best Actor, Television Drama Series
Nominees: Jon Hamm (Mad Men); Rami Malek (Mr. Robot); Wagner Moura (Narcos); Bob Odenkirk (Better Call Saul); Liev Schreiber (Ray Donovan)
Prediction: Bob Odenkirk
If Hamm hadn’t finally had his big moment at the Emmys last fall, he’d probably be a shoo-in here. And he could very well win anyway. But Odenkirk grew his comically one-note Breaking Bad character into a rich dramatic protagonist in Better Call Saul, and that ought to be hard for the voters to ignore — although they certainly had no problem bypassing the actual show, which should’ve been a drama nominee.

Best Actress, Television Drama Series
Nominees: Caitriona Balfe (Outlander); Viola Davis (How to Get Away With Murder); Eva Green (Penny Dreadful); Taraji P. Henson (Empire); Robin Wright (House of Cards)
Prediction: Caitriona Balfe
Sometimes the nominations in other categories can be a good guide for where the Hollywood Foreign Press’s heads are at. Here’s a hint: These folks seems to like Outlander a lot. Henson’s got a good shot, of course, since Davis beat her out for the Emmy and Empire debuted too late last year to get any Globes attention. But Balfe seems slightly ahead of the pack, given how much her show pops up on the TV side of the ballot.

Best Actor, Television Comedy Series
Nominees: Aziz Ansari (Master of None); Gael García Bernal (Mozart in the Jungle); Rob Lowe (The Grinder); Patrick Stewart (Blunt Talk); Jeffrey Tambor (Transparent)
Prediction: Rob Lowe
Transparent may repeat as Best Comedy, but Tambor has too much cool competition here to win another unimpeded trip up to the stage. The long-shot choice that stands a good chance of beating the field is Lowe, for multiple reasons: he’s a good-looking, familiar star; he was nominated several times for The West Wing but never won a Globe; and he’s freakin’ hilarious on The Grinder, one of this TV season’s underseen gems. 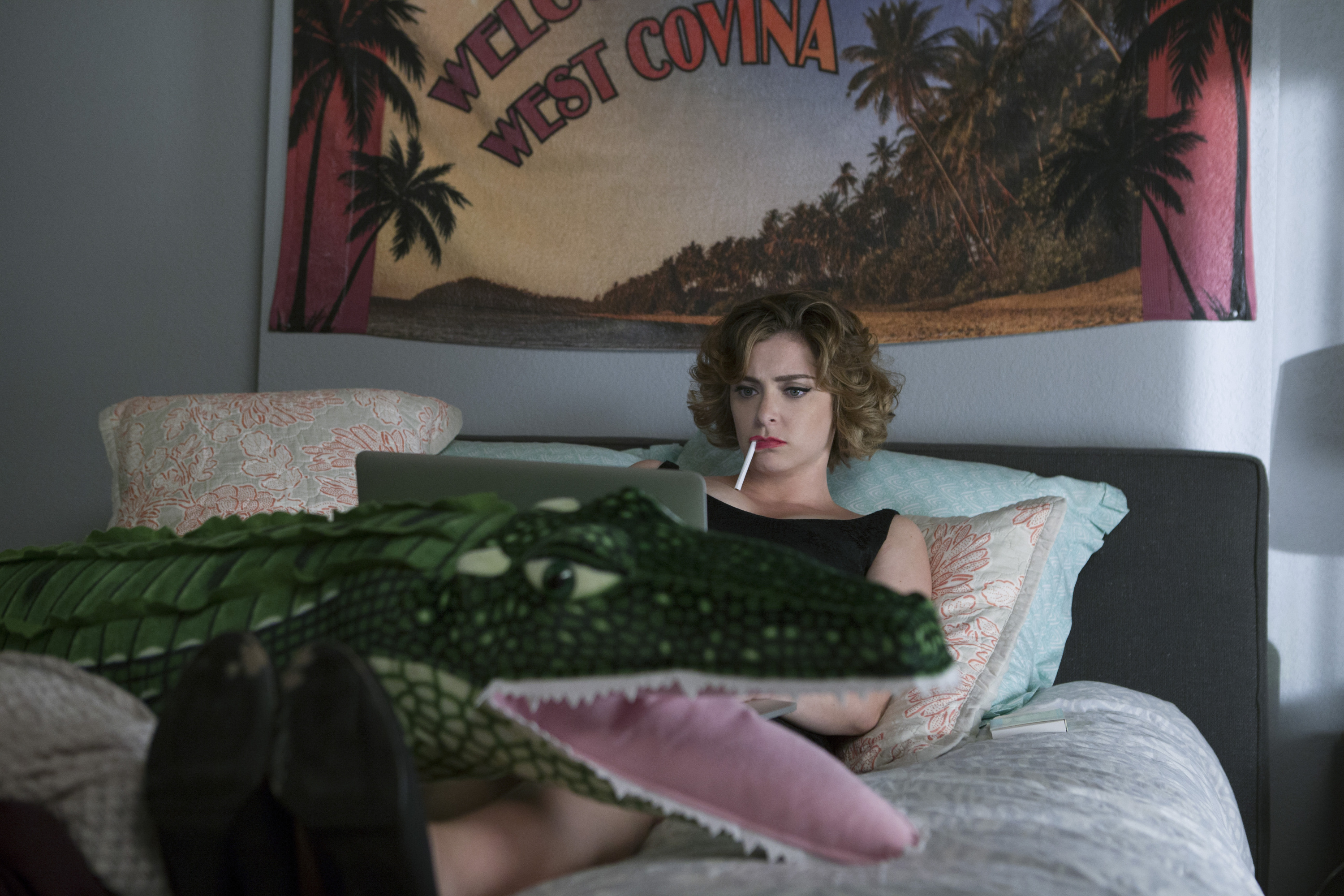 Best Actress, Television Comedy Series
Nominees: Rachel Bloom (Crazy Ex-Girlfriend); Jamie Lee Curtis (Scream Queens); Julia Louis-Dreyfus (Veep); Gina Rodriguez (Jane the Virgin); Lily Tomlin (Grace and Frankie)
Prediction: Rachel Bloom
Again, here’s where this awards show separates itself from the Emmys: New talent often trumps old. Rodriguez was the fresh face last year, and it’d be no crime at all if she won again. But Bloom’s show needs more of the kind of publicity that a Golden Globes win can bring. Plus, she sings and dances! And she’s an executive producer! She’s both worthy and unusual — often more than enough to bring home this award.