When Ethan Hawke turned 40 a few years ago, he did a couple of things. “One is I got my motorcycle license,” Hawke says, splayed out in the corner booth of a Manhattan cafe. “I had it before, but I got it again. But when I went to buy a bike, the guy said, ‘You have four kids? I’d wait till the youngest graduates from high school.’ And I thought, ‘You know what? That’s a really good idea.'”

The other thing Hawke did was start working a lot. “I basically pressed the panic button,” he says. “When I was young and everybody wanted me to be a movie star, I was like, ‘Eh, we’ll see.’ But all of a sudden I turned 40, and I just wanted to work. Put me in, coach. I want to play.” Partly this was a days-are-numbered kind of thing, but it was also practical: Hawke has two teenagers with his ex-wife, Uma Thurman (Maya, 17, and Levon, 14), and two more daughters with his current wife, Ryan (seven-year-old Clementine and four-year-old Indiana). “All of a sudden you’re staring at a divorce, and child support, and college coming up, and you’ve got new babies and you’ve kind of burned through the savings …” he says, trailing off. “It creates a loud noise in your head: ‘Is everybody OK?'”

30 Best Music Biopics of All Time

It’s a wet late-winter afternoon, and Hawke is dressed for the weather in a wool cap, red flannel shirt and beat-up work boots. With his grungy style and omnipresent goatee, even at 45, he looks a lot like the fresh-faced college dropout who, a quarter-century ago, landed a series of roles that would go on to define a generation: the sensitive prep-schooler in Dead Poets Society, the slacker guitarist in Reality Bites, the philosophizing backpacker in Before Sunrise. Recently, however, in films like Boyhood (directed by his close pal and frequent collaborator Richard Linklater), as well as his newest movie – a bio-pic of Fifties jazz musician Chet Baker called Born to Be Blue – the onetime Gen X poster boy has morphed into a bona fide grown-up. And to hear him tell it, he’s so much better for it.

In some ways, Born to Be Blue started 15 years ago, when Brad Pitt dropped out of a movie about Baker – the broodingly handsome trumpeter whose once-promising career was derailed by heroin. Hawke and Linklater took over with plans to make a kind of anti-biopic – just one day in Baker’s life, where he neither does drugs nor plays music. “Most biopics fall into the category of ‘let’s watch so-and-so act,’ ” Hawke says. “Everybody loves it, and you get lots of prizes. But there’s something showy about it.” The movie he and Linklater planned was different – but they had trouble getting it funded, and eventually Hawke got too old for the part.

Then came some tough times. In 2003, Hawke and Thurman split, followed by a lonesome stretch in which he retreated to an island cabin in Nova Scotia and drove around in the rain listening to Wilco’s A Ghost Is Born. He starred in a handful of box-office disappointments and directed a movie that was less than well-received; in other words, he went through some shit.

Hawke was back on track and happily remarried and in professional demand by the time the script for Born to Be Blue found him. In this version – written by director Robert Budreau – Baker was 15 years older, laid low by failure and ravaged by addiction. Hawke was curious to tackle a more lived-in version of a character he’d gotten to know 15 years ago – similar to what he did in Boyhood, only instead of a guy getting his life together, it was a guy whose life was falling apart. “He aged out of my film and into this one, which we both found kind of poetic and beautiful,” Linklater says.

One particularly tragic event influenced Hawke’s portrayal of Baker: the sudden death of Philip Seymour Hoffman from a cocaine and heroin overdose. “There’s probably only two actors of my generation who have inspired passionate envy in me, and that’s River Phoenix and Philip Seymour Hoffman,” says Hawke. He’d been friends with both: When he was 13, he and Phoenix co-starred in Explorers, Hawke’s first-ever film, and he and Hoffman were longtime pals through the New York theater world. Shortly before Hoffman’s death, they had been talking about mounting a guerrilla production of Waiting for Godot – just hopping in a car and showing up at San Quentin prison or an old folks’ home and putting on a show. “It was mysterious to me, that these two guys that I felt such passion for both died the same way,” Hawke says. He read the script for Born to Be Blue a month after Hoffman’s funeral. “I don’t think it’s any coincidence I was drawn to it. It was heavily on my mind: addiction and insecurity and confidence and where they all meet.”

Hawke says he’s never tried heroin himself: “It scares me.” But he’s “spent my life around Chet Bakers,” and he convincingly (and frighteningly) embodies a junkie’s spiral of self-sabotage. “For a guy like Chet, drugs became an easy way around a giant mountain,” Hawke says. “I see a lot of young people who think that if they indulge their depression and insecurities, it will create this gift. When in truth I think artists like River or Phil or Chet are succeeding despite the addiction. Yes, the pain and agony might create something – but there’s got to be a really big talent there to begin with. Otherwise, you’re better off getting sober and working every day like the rest of us.”

Later that night, after Hawke pops home to have dinner with his kids, we meet up at the Village Vanguard, the legendary West Village jazz club. There’s a trumpet player Hawke wants to check out: Ambrose Akinmusire, who played on Kendrick Lamar’s To Pimp a Butterfly. Hawke learned to play trumpet for the Baker movie. “It was one of those things where the more you learn, the more you know you don’t know,” he says. We get a table in back and he orders a whiskey. As Akinmusire plays, Hawke mirrors the trumpet fingerings on his thigh. 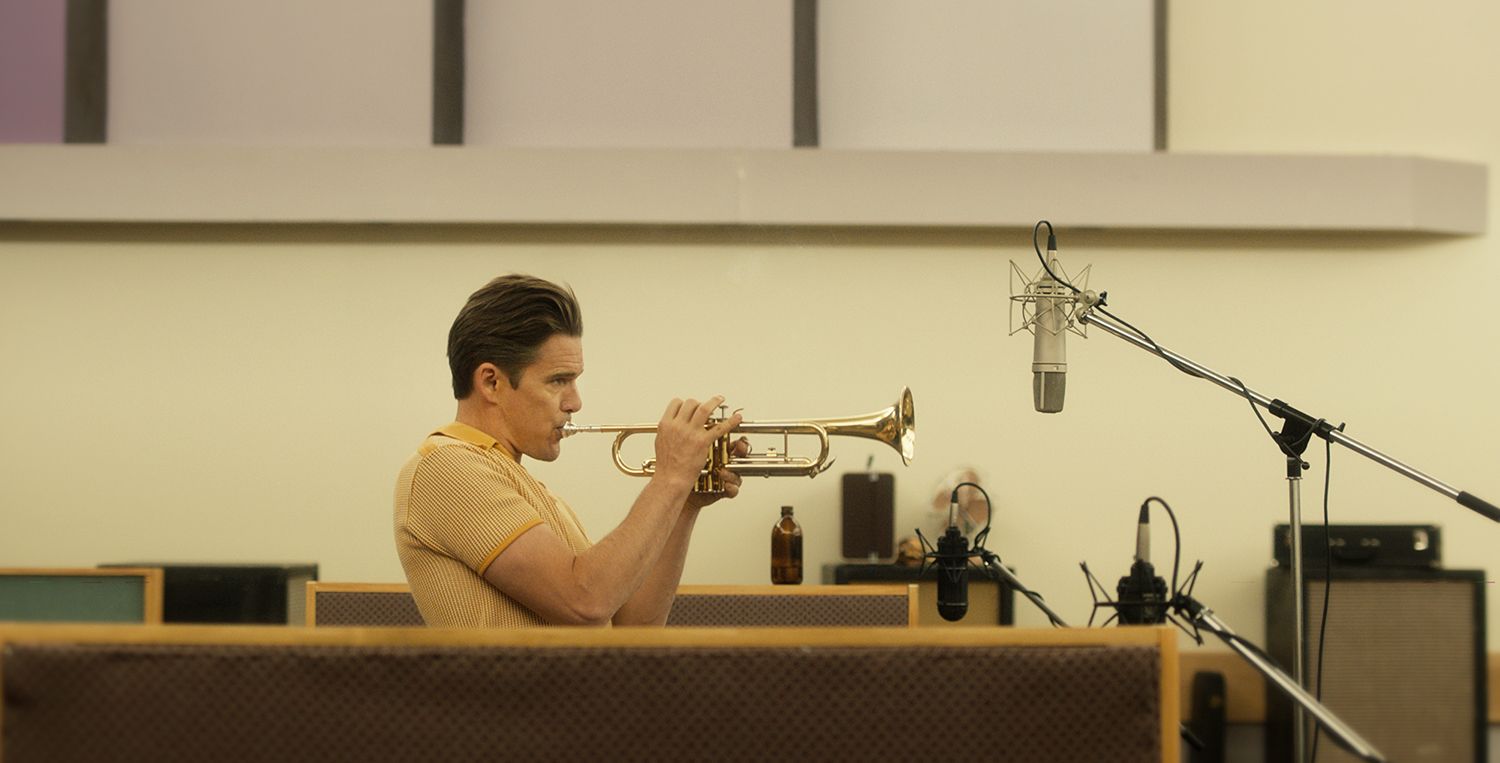 “That guy was pretty fucking good,” Hawke says afterward. “Every now and then he’d come out with a note that was so off, but so on.” We go around the corner for a nightcap. “There used to be a place called Art Bar here,” he says, scanning the block. “Is it gone? Shit, that’s depressing.” He walks a little farther. “Oh, there it is!”

Hawke is dauntingly well-read. In our few hours together, he drops references to T.S. Eliot, Chekhov, St. Francis of Assisi, Blaze Foley, Sam Shepard, Georges Bataille and FKA twigs. He recently finished writing a young-adult book – Rules for a Knight, based on letters he wrote to his kids – and a graphic novel about Geronimo, Cochise and the Apache wars called Indeh, which will be published this summer. “I’ve been working on that motherfucker for a long time,” he says of Indeh. “I want to share it with people.”

Hawke seems to have taken that old Hollywood saw about “one for them, one for me” and amplified it: five for them, five for me. He’s also recently come to appreciate supporting roles in big-budget flicks. “As somebody who likes to do a lot of things, it’s the perfect job,” he says. “I spent last summer in Louisiana doing Magnificent Seven” – a remake of the classic Western that reunited him with his Training Day director, Antoine Fuqua, and co-star Denzel Washington. “In my trailer on the set, waiting to go to a gunfight, I finished a book, proofread my graphic novel, worked on a script and skateboarded with my son. And I got paid to do the movie!”

“Most biopics fall into the category of ‘let’s watch so-and-so act.’ Everybody loves it, and you get lots of prizes. But there’s something showy about it.”

Hawke knows all these side projects might make him seem like a poseur or a dilettante; in fact, he’s the first one to say it. “The people who made fun of me when my first book was published were right to,” he says. “I was incorrigible. I’d be like, ‘Hey, I wrote 10 pages, you should read it!’ Now I know you probably have something more interesting to do.” Wryly, he recalls how he showed a cut of his first directorial effort, 2002’s Chelsea Walls, to Wilco frontman Jeff Tweedy, who was writing music for the film. “Afterward he just turned to me and goes, ‘What do you do when people tell you you’re pretentious?’ ” Hawke says, laughing.

“Ethan’s not really a careerist,” says Linklater. “He’s never had that star-making machinery thing that a lot of young actors have: ‘I don’t want to be a supporting actor to that person, because that means I’m not as big a star…’ He just does what he’s compelled to do. I was with him one weekend when this huge film was opening, and he goes, ‘God, I turned that down, I didn’t even take it seriously – it was so stupid of me!’ But he looked at it, working with little aliens or whatever the dumb central conceit was, and he was just like, ‘No. I can’t get out of bed in the morning to do that.’ ”

We order another round of whiskeys and a couple of beers, and Hawke eases into raconteur mode. He starts telling stories about his night at the Oscars for Training Day (“Denzel turned to me and whispered in my ear, ‘You don’t want to win it now’ ”) and about his divorce (“The great thing about being in New York is you can live a stone’s throw from your ex and still never see them. I can go to back-to-school night and not see her!”) After a while, the conversation turns to Hawke’s kids. He says his daughter Maya recently started following in her parents’ acting footsteps.

It’s getting late, and Hawke’s wife is texting, asking when he’ll be home.

“You know what my favorite Chet Baker quote is?” Hawke asks. “This is hearsay, but it has the smell of truth. Apparently Wynton Marsalis said something disparaging about Chet, and Chet was asked about it. And his response was ‘You know, if I could play like Wynton Marsalis – I wouldn’t.’ ”

Hawke cracks up. “‘I wouldn’t.’ What a great fucking line.”