'Close Encounters of the Third Kind' at 40: In Praise of Spielberg's Mothership Connection - Rolling Stone
×
×

How do you follow up a record-breaking blockbuster about a killer shark? For starters, you get out of the ocean. And then maybe you look up.

A longtime watcher of the skies, young Steven Spielberg had already been kicking around an idea involving alien visitation, spacecraft “sightings” and government cover-ups – some sort of story, in the gentleman’s own words, about “UFOs and Watergate” – before he had started turning Peter Benchley’s novel Jaws into a movie. One three-men-and-an-apex-predator hit later, he was a hot Hollywood director who had folks ready to sign on for whatever he did next. That included Columbia Pictures, as well as Taxi Driver producers Michael and Julia Phillips, who gamely took the director’s extraterrestrial-visitors story and got him a greenlight. The result both delighted his patrons – Fox had opened a space opera earlier that year, hence the company was thrilled to have their own science fiction movie on deck – and worried them, given this expensive project was supposed to have come out the previous summer before production problems caused delays. Now, the film was going to make or break the nearly bankrupt studio.

So, in a moment of bet-hedging, Columbia decided to give Spielberg’s movie with the screwy name – what the fuck was a Close Encounters of the Third Kind, and why are you driving our marketing department to drink, Steven? –  a mid-November opening in two theaters, the Cinerama Dome in Los Angeles and the Ziegfeld in New York. Screenings kept selling out. Their confidence had been restored thanks to these two reconnaissance runs. Now it was time to land the mothership.

It was 40 years ago today that Close Encounters of the Third Kind opened in wide release and, in quick succession, proved that Jaws was not a fluke, helped put the financially ailing Columbia firmly back into the black, established the filmmaker as someone with a knack for directing kids and grounding the fantastic, dropped that title phase into the popular lexicon and made John Williams’ communicative musical motif famous. (Hum those first three notes – Dun-DUN-duuun – then check out the number of people who chime in with the two-note resolution: DUUUNNN-dun.) You could argue that, while Spielberg would go on to make more notable works involving wonderment, aliens, families, paranoia and suburbia, respectively, there are few that distill everything that’s great about his filmmaking in such a pure, well-wrapped package. And seen four decades after it first hit theaters en masse, Close Encounters now feels like an incredibly pivotal American movie – the bridge between the intimate, grungy movies of the Seventies and the spectacular eye-candy blockbusters of the Eighties. 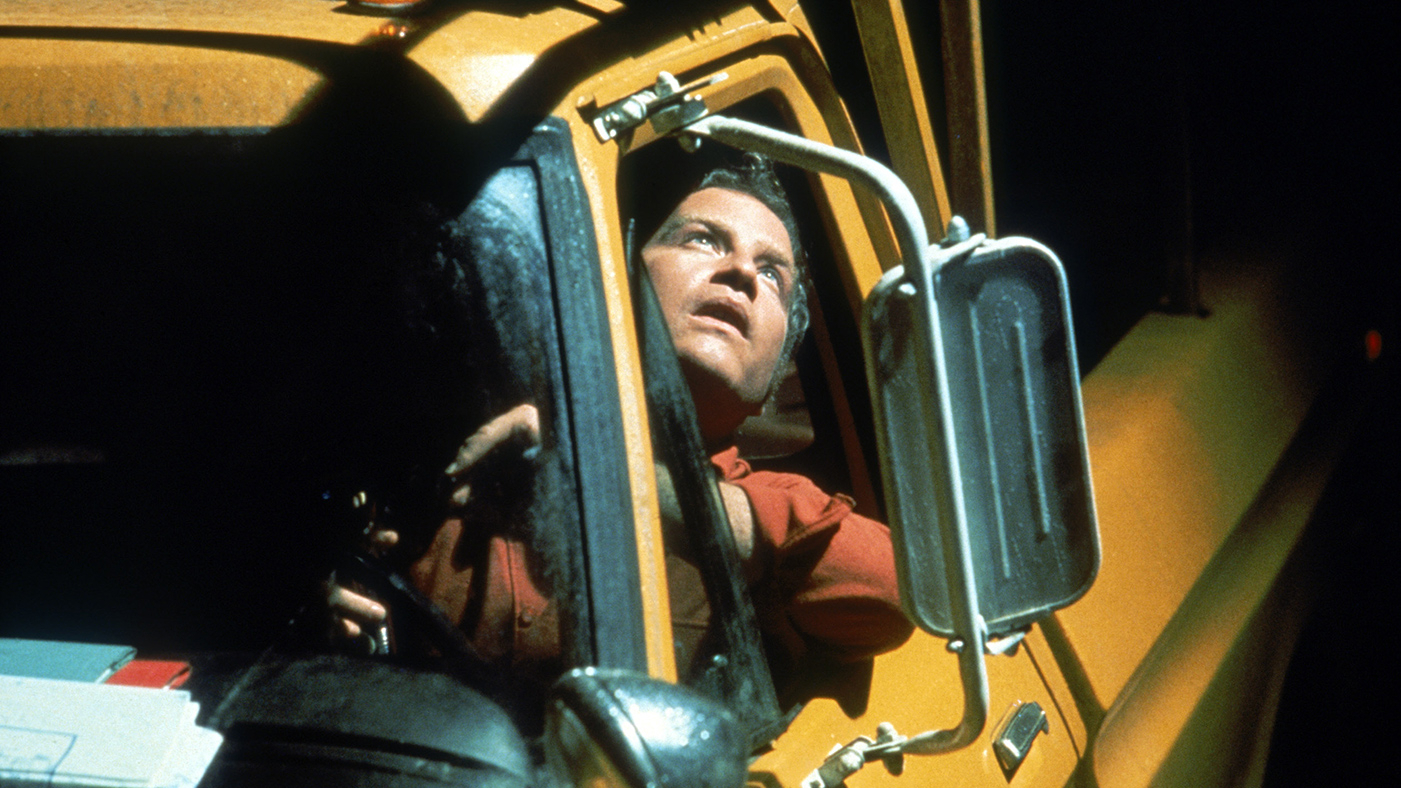 Seriously, when was the last time you watched this spirit-of-’77 sci-fi touchstone in any of its iterations? (We recommend the “Director’s Cut,” which blends the best parts of the theatrical cut and the “Special Edition,” minus the latter’s Pink-Floyd-laser-light-show ending. More on that in a minute.) If it’s been a while, the first things that come to mind are probably the climactic interstellar meet-and-greet, the sculpted mound of spuds on Richard Dreyfuss’s dinner table, the iconic visual of five-year-old Cary Guffey opening his front door and basking in an unearthly orange glow – an image that Spielberg claimed was one of the first conceptual sparks he’d imagined for the project. You remember the bigger moments, the ones in which those bright lights are whizzing through the air and Gregory Jein’s mothership model, hovering over Devil’s Tower, inspires awestruck faces framed in the director’s customary low-angle shots.

It’s no wonder these scenes are burned into your memory: Time has been particularly kind to Close Encounters, even if the special effects occasionally carbon-date the movie to the Carter era. What you might not remember, however, are the atmospheric things that Spielberg scatters throughout the movie, the ones that add immensely to its texture. Most of us had probably forgotten that the film starts in the Sonora desert in Mexico, with barely visible figures wandering through dust storms – the same sort of feint that The Exorcist used by kicking off at an archeological dig in Iraq before getting around to the head-spinning money shots. You can practically smell the stale coffee and flop sweat in the air-traffic control tower sequence, and the panic as people pitch coal-mine canaries in the evacuation sequence. Never mind the toys coming to life in a kid’s bedroom; it’s the extraordinary close-up on Guffey’s face that follows, in which he expresses first dawning wonder then outright joy upon meeting his new alien friends, that makes the scene work. Go to the two-minute mark in the clip below. Those 15 seconds are the director’s equivalent of the end of Chaplin’s City Lights.

The gritty touches and grace notes are what really stick out now, the same way that Roy Scheider and his son crushing the Dixie cups in a faux-manly manner in Jaws adds so much humanity to the sound and fury while barely breaking a cinematic sweat. No one does this anymore, not in big movies. Spielberg told Sight & Sound magazine at the time that he wanted Close Encounters to be “about people and not about events,” which feels like a very Seventies/New Hollywood conceit. (He also said that the film “does to UFOs what The French Connection said about crime in the street and narcotics and New York City,” so keep that grain of salt handy.)

And for all of what the director termed “cosmic entertainment” epicness on display, this is also a movie takes place in a very recognizable America, one filled with ratty nightgowns and station wagons and instant mashed potatoes, of harried moms and frayed marriages. Yes, the scene in which our otherworldly visitors try to get Melinda Dillon’s son, ending with a tug of war in a doggie door, is terrifying. So is Richard Dreyfuss’ melting down in the shower, his son screaming “Crybaby” at him, which Spielberg later admitted came from his own life. No aliens there, just a nervous breakdown. You do not need a Great White or a T. Rex to present audiences with a nightmare.

It’s those scenes in Roy Neary’s house, the arguments and clucking neighbors and the manic episodes that end with men crawling through their broken kitchen window, that offset and compliment the hugeness of the rest of the film – a mix made explicit when Spielberg puts the giant homemade Devil’s Tower in the living room right next to the real one miniaturized on TV. (So much brilliant visual wit in this movie.) They never feel like filler until the main event happens, i.e. the first-contact moments that still give you goosebumps. And even that monument to the breaching of our world and the outer limits of the universe is still rife with the sort of faces you’d see at your local gas station and drug store. They just happen to have their jaws dropping.

The climax, however, also seems to anticipate what will come next in blockbuster movies: the idea of wowing someone into submission. It’s common knowledge that Spielberg didn’t want to film the “special edition” scenes of Dreyfuss entering the ship; in an interview recorded for the movie’s 30th anniversary, he insisted that what lay inside that gigantic vessel should be “the province of the viewer’s imagination.” While it’s great to think of Douglas Trumbull’s hallucinogenic take on Noah’s Ark as a time-capsule piece – see what cutting-edge FX once looked like, kids! – they are completely superfluous. We’ve been given everything we need to supply our own wonderment already. And we were about to enter a whole era where such overwhelming spectacle reigned supreme.

Some of those big, blow-out-the-Dolby-speakers movies would come from Spielberg, of course, as well as the generation of filmmakers who cut their teeth studying his work. He’d expand on the ideas embedded in Close Encounters with E.T., in which the idea of friendly intergalactic ambassadors turns into, per the director, “a foreign-exchange program.” He’d also embark on a career based on balancing multiplex rollercoaster rides with becoming America’s cinematic civics professor. As with any feature filmography that spans nearly 50 years and counting, results will vary: If we have to sit through Amistad and The Terminal to get Munich and Lincoln, we’ll take the lumps. But it’s this near-perfect blend of the epic and the everyday that remains a testament to what Spielberg, at his very best, can accomplish. His ability to give science fiction a sense of emotional resonance – right at the moment between the genre’s cerebral and bombastic chapters – with such a large canvas and yet such an attention to the heartbeat underneath it still feels like a major accomplishment. Who knows whether Close Encounters is his “best” movie. It remains my favorite.