“It is with a very deep sadness that Billie Lourd confirms that her beloved mother Carrie Fisher passed away at 8:55 this morning,” Simon Halls, a spokesperson for Fisher’s family, said in a statement to People.

“Thank you to everyone who has embraced the gifts and talents of my beloved and amazing daughter,” Fisher’s mother, actress Debbie Reynolds, wrote on Facebook. “I am grateful for your thoughts and prayers that are now guiding her to her next stop.”

Fisher suffered a heart attack last week aboard a Los Angeles-bound flight 15 minutes prior to landing. A medic onboard performed CPR on the actress until paramedics arrived to take her to UCLA Medical Center, where she was placed on a ventilator.

“Carrie and I have been friends most of our adult lives,” Star Wars creator George Lucas said in a statement. “She was extremely smart; a talented actress, writer and comedienne with a very colorful personality that everyone loved. In Star Wars, she was our great and powerful princess — feisty, wise and full of hope in a role that was more difficult than most people might think. My heart and prayers are with Billie, Debbie and all Carrie’s family, friends and fans. She will be missed by all.”

The Last Word: Carrie Fisher on LSD, Death and Sex With Han Solo

The Tao of Carrie Fisher: 37 Great Quotes From the Actress and Author

“Carrie was one-of-a-kind, brilliant, original,” Harrison Ford, who played Han Solo alongside Fisher, added in a statement. “Funny and emotionally fearless. She lived her life, bravely. My thoughts are with her daughter Billie, her mother Debbie, her brother Todd and her many friends. We will all miss her.”

“I’m deeply saddened at the news of Carrie’s passing,” Fisher’s Empire Strikes Back and Return of the Jedi co-star Billy Dee Williams wrote on Twitter. “She was a dear friend, whom I greatly respected and admired. The force is dark today!”

Mark Hamill, who played Luke Skywalker in the trilogy, tweeted a brief, but poignant, message.

The daughter of Reynolds and singer Eddie Fisher, the actress made her Broadway debut as a teenager in Irene, which starred her mother. After making her big screen debut in 1975’s Shampoo and briefly enrolling in London’s Central School of Speech and Drama and then Sarah Lawrence College, Fisher dropped out, at the age of 19, after landing the role of Princess Leia in George Lucas’ 1977 space epic Star Wars.

“She has no friends, no family; her planet was blown up in seconds – along with her hairdresser – so all she has is a cause,” Fisher told Rolling Stone in 1983 of the role. “From the first film [A New Hope], she was just a soldier, front line and center. The only way they knew to make the character strong was to make her angry. In Return of the Jedi, she gets to be more feminine, more supportive, more affectionate. But let’s not forget that these movies are basically boys’ fantasies. So the other way they made her more female in this one was to have her take off her clothes.” 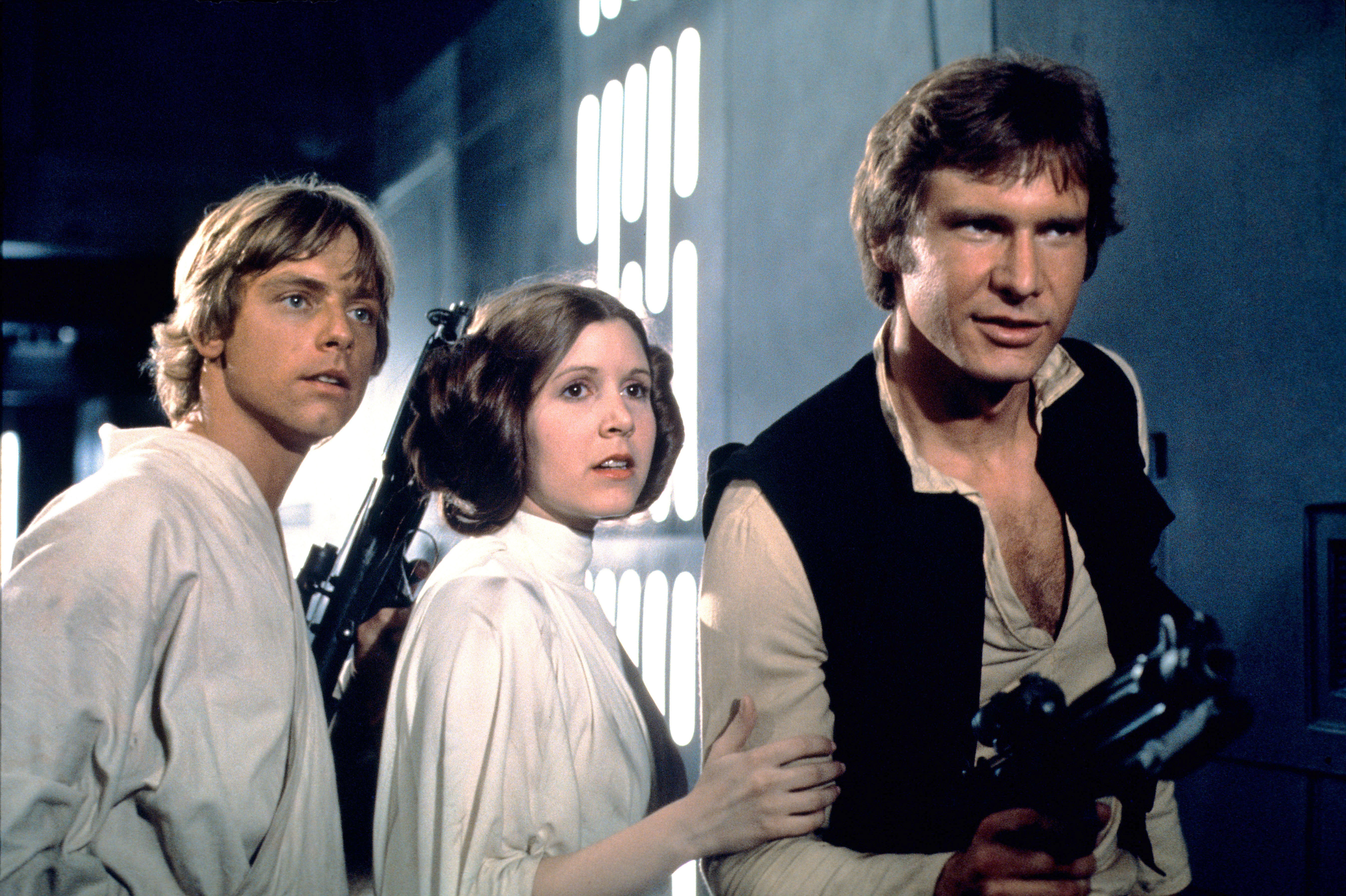 “Lucas always had to remind me to ‘Stand up! Be a princess!’ And I would act like a Jewish princess and lean forward, slouching, chewing gum,” Fisher once joked.

Fisher also saw parallels between Princess Leia, the lost daughter of the series’ villain Darth Vader, and her own unique childhood as the daughter of two Fifties superstars; Fisher endured both her mother’s highly publicized divorces as well as her father’s own issues with substance abuse (“He’s a little shellshocked from 13 years of doing speed, but he’s real friendly,” she said in 1980 of Eddie Fisher, who died in 2010.)

“Leia’s real father left her mother when she was pregnant, so her mother married this King Organa. I was adopted and grew up set apart from other people because I was a princess,” Fisher said. “A lot of parallels, me and Leia. Dad goes off to the dark side, and Mom marries a millionaire. My brother and I went in different directions on the Debbie and Eddie issue. He’s gotten involved with Jesus, and I do active work on myself, trying to make myself better and better. It’s funny.”

Throughout her career, Fisher was open about her struggles with mental illness – the actress was diagnosed with bipolar disorder – and drug use, admitting that she had abused cocaine throughout the filming of The Empire Strikes Back, as well as prescription drugs. “Drugs made me feel normal,” Fisher said in 2001. Her one-woman play and memoir Wishful Drinking also tackled her battle with addiction.

In addition to playing Leia in the original Star Wars trilogy and 2015’s Star Wars: The Force Awakens, Fisher also appeared in films like The Blues Brothers, When Harry Met Sally, The ‘Burbs and Woody Allen’s Hannah and Her Sisters.

Rob Reiner, who directed Fisher in When Harry Met Sally, tweeted, “Carrie Fisher had a brilliant mind. I will miss her insight her wit and her beautiful voice.” The film’s star, Billy Crystal, also shared a note on Twitter, “Fisher’s loss is devastating. Her wit – her inspiration to those with mental illness was monumental. Loved working on WHMS with her.”

Fisher was also slated to reprise the Leia role in Star Wars’ upcoming Episode VIII and Episode IX. “I was very nervous, had a lot of memory problems initially – just horrific – and then it got better,” Fisher told Rolling Stone in 2015 about returning to the legendary role. “I settled in. You know, think about it, what it would be to make three of these movies a million years ago, and now, ‘Let’s do it again, only you’re 40 years older and there’s a lot to live up to or down – take your pick.’ People want it to be the same but better … I don’t know. So there’s pressure on it, more than most films. But then you get over yourself and say, ‘By the way, it’s the younger people doing it.’ You have to sort of like get over yourself fast.”

“You didn’t need to meet Carrie Fisher to understand her power,” Star Wars: The Force Awakens director J.J. Abrams wrote on Twitter. “She was just as brilliant and beautiful, tough and wonderful, incisive and funny as you could imagine. What an unfair thing to lose her. How lucky to have been blessed with her at all.”

“Devastated at this monumental loss,” Force Awakens star Daisy Ridley added in a statement. “How lucky we all are to have known her, and how awful that we have to say goodbye.”

In 1990, Fisher turned her semi-autobiographical memoir Postcards From the Edge, which detailed her drug addiction and rehab experiences as well as her relationship with Reynolds, into a feature film starring Meryl Streep. Fisher was nominated for a Best Screenplay BAFTA for the film, while Streep earned a Best Actress Academy Award nomination for playing Fisher’s alter ego “Suzanne” in the film.

Fisher was also the writer of four novels and the ex-wife of singer-songwriter Paul Simon, who she was married to for a year in 1983. “Yesterday was a horrible day,” Simon said in a statement. “Carrie was a special, wonderful girl. It’s too soon.” Fisher was also in a longterm relationship with talent agent Bryan Lourd, with whom she had her only child, Billie Lourd.

Fisher also appeared in guest roles in numerous shows, including The Big Bang Theory, Entourage, Sex and the City and a memorable spot on 30 Rock. “Carrie Fisher meant a lot to me,” 30 Rock star and creator Tina Fey said in a statement. “Like many women my age, Princess Leia occupies about sixty percent of my brain at any given time. But Carrie’s honest writing and her razor-sharp wit were an even greater gift. I feel so lucky that I got to meet her. I’m very sad she is gone.”

Speaking to Rolling Stone last month, Fisher was asked if she feared death. “No. I fear dying,” she said. “Anything with pain associated with it, I don’t like. I’ve been there for a couple of people when they were dying; it didn’t look like fun. But if I was gonna do it, I’d want someone like me around. And I will be there!”