If you know someone at the Guinness Book of World Records, do Anthony Daniels a favor and get in touch on his behalf – after playing the same character, C-3PO, in seven movies, plus too many cartoons and video games to count, he’s pretty sure he deserves a spot. And at age 69, he’s still trim enough to fit into the golden suit. In his interview for Rolling Stone‘s new cover story on the making of Star Wars: The Force Awakens, Daniels talked about the early days of the character, his favorite 3PO moments and more.

What was it like to do the first read-through for The Force Awakens, with the original cast reassembled?
I thought it would be boring as heck, with the actors just mumbling into their kneecaps. But it was quite the opposite and it was just lovely. I particularly remember that with Harrison … it was like he’d never stopped being Han Solo. He was just as witty, funny, serious, brave, all the things that you expect of him, and there he was sitting across the room. I was thinking, “Gosh, this is really good.” Didn’t even have to buy a ticket! So you could’ve bottled that performance, it was great.

'Star Wars' Strikes Back: Behind the Scenes of the Biggest Movie of the Year

And one day later on, I was rehearsing with Princess Leia, without the mask on, just looking into Carrie’s face about three feet away from me, just looking into her eyes and having her look into mine –  because you can’t see my eyes behind that mask. I didn’t mention it to her, but it was a very sweet moment of just looking eye to eye for once. And you know, she’s older, I’m older and it’s okay, we’re still here.

You’re the only person to go from all of the prequels to this movie.  How would you sum up that transition?
The first time that I would appear on set as 3PO – because I used to make a dramatic entrance – George would say, “Ah, Star Wars has arrived.”  I feel like a family heirloom, you know? 3PO is something that’s always there. I think in the prequels I got used to Alec Guinness being Ewan McGregor, you see – you know, everybody changed, and I have a problem with names but we got through it. And you know, characters were digitized or whatever, put in afterward in post-production. Digital is okay, but when people create something real, it’s like a conjuring trick. “How did they do that? I want to know but I don’t want to know.” With BB-8 on this movie, I was on set watching, and I couldn’t believe what I was seeing. BB-8 is instantly adorable. I think he’s gonna be the smash hit, and now you have people who own miniature versions in their own homes.

The first version of the C-3PO suit in the Seventies actually hurt you when you moved in it. Do you still have scars?
There were some very nasty – what do you call them? Bruises, where you get pinched, like getting your fingers caught in a pair of wire cutters or something. And I look at my sort of scraggly neck and my sort of falling-out hair and think, “I wonder if that’s to do with being cooked inside the suit for 40 years – or is it just age?” I think it’s just age. I realize just how clever the original designers were in putting something together. But we had slightly run out of time in pre-production so it didn’t quite work on day one or day two … or even to the end [laughs]. But whatever. As an actor you put up with all sorts of things that the audience doesn’t need to know about. But yeah, I’ve got the scars.

Did people look at you differently the moment you first put on that suit?
I managed to struggle a few feet to get out of the tent, and then I’m looking at people who are staring at me like nobody ever had. It was an extraordinary feeling because my eyes looked through his eyes and everybody’s eyes were looking at him and therefore at me, and it was actually quite a bewildering moment. And then, of course, we started filming and it went back to pain [laughs].

What else stands out from those first moments of filming the original Star Wars?
It was quite funny ’cause the Jawas –  you know, do you remember the Jawas?

I’m familiar, yes.
There were children in the outfits who thought it was huge fun to be a Jawa, but that kind of lost its charm after half an hour and they didn’t understand [laughs] they had to keep doing it again and again.

I’m sure that in 1976, 1977, the idea that you would still be doing this character in 2015 was not on your radar screen.
Yes, but there was something working in my favor in spite of me not even wanting the initial job interview, in spite of possibly not being the voice of C-3PO … in spite of me balancing whether to do a second go at it. Some bigger entity, Force, whatever you would call it, clearly was shoving me in this direction. Because I was so unenthusiastic. The first thing was my agent, who said, “Don’t be so stupid. Go and meet George  – you don’t know what it could lead to,” but it actually leads me talking to you today. So I am merely a pawn in all of this, and maybe George knows something we don’t, you know? 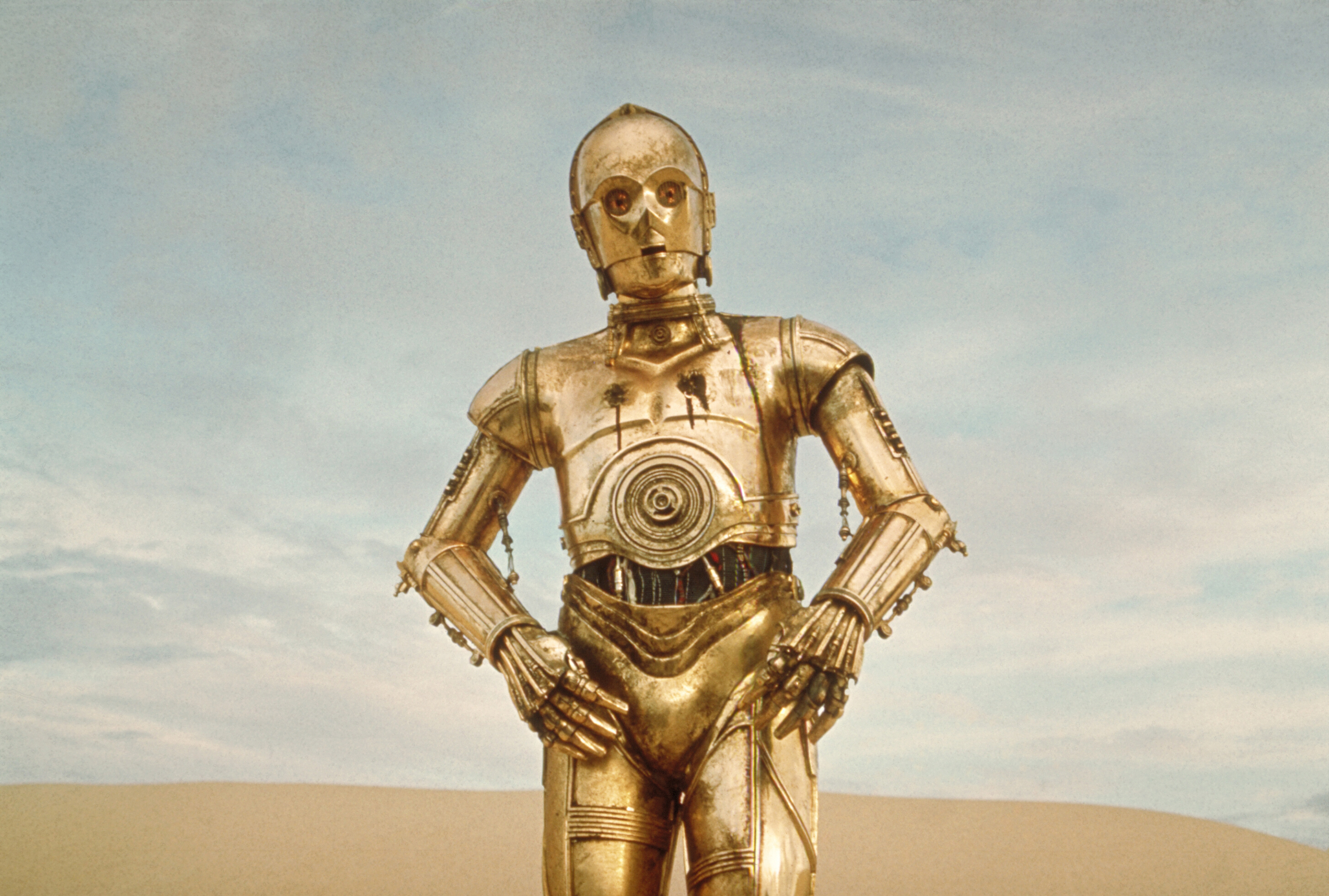 George actually said early on that there would be nine movies, and that the droids would be the only characters in all of them.
Oh, definitely! And somehow that sort of got lost in the mists of time, as things do. And there was no guarantee.

Do you keep in your head the knowledge from the prequels that 3PO was actually built by a young Darth Vader, or do you try to forget it?
It’s there as sort of archive in my brain, but since 3PO doesn’t know that he was created by Anakin, it would be wrong for him to be cowering in a corner apologizing ’cause his dad’s Darth Vader. He doesn’t know, so I don’t think like that. In general, one of the challenges is that 3PO is reactive rather than proactive so he very much depends on the circumstances in which the director and script writer – not necessarily in that order – have placed him in. And his various directors love to abuse him physically and tear him apart, stick him together in the wrong order, all that kind of thing. He’s different from the other characters. You can rearrange him and he bounces back eventually [laughs].

I think some of my favorite moments are the constant romantic interruptions in Empire.
Mine too. It was very funny on the set because he’s so unaware. You know, that’s one of the charming things. I really love that because he has no concept of emotional attachment, or at least the physical bit. I mean, I think he did once try and kiss R2-D2, but it wasn’t a good move. [laughs]

“People who come up to me in the street and say, ‘Thank you for my childhood.’ That is one of the nicest things ever.”

And in Return of the Jedi, you had that wonderful moment where you get to tell the entire story of the saga up to that point to the Ewoks.
I remember it was a Friday and they said to me, “Oh, can you come in and mime the story so far for the Ewoks?” I actually, you know, stood in front of a mirror at home and kind of made a fool of myself [laughs], and it worked. Well, the great joy, of course, is that Ben Burtt added the sound effects, which I actually didn’t know they were going to do and that helped me very much. But, of course, the irony is, in the first film, 3PO says, [in character] “I’m not very good at telling stories, or not at making them interesting, anyway,” because he’s bored people for centuries. And suddenly he gets this willing audience in the Ewoks, which was very sweet.

Where did the voice come from for you?
I’d talk to George about Hal in 2001: A Space Odyssey. And I thought about it and I tried robotic voices and nothing gelled. And then something very strange happened on the first day: After I walked out of that tent, 3PO took over, frankly. But you see, he’s very nervous, he’s always in the wrong place, he’s tense, nobody believes him so he’s impatient, he’s got a sidekick who is always arguing with him. He’s a very tense character and when you’re tensed your body tends to get a little tight. And also if you’re slightly afraid, it tends to [in character] go up a few tones,. In doing that I actually stand up straight and tense my stomach muscles because muscle tension does affect you.  You’d laugh if you saw me in a dubbing studio because it’s me in jeans and a t-shirt but I’m standing like C-3PO, because that’s the way I am on set so I just automatically replicate it. And people sort of say, “Oh, I can see the costume.”

I think people find it upsetting to hear that you and Kenny Baker, who was inside R2-D2, supposedly don’t get along.
Well do you believe everything you read? You know, I haven’t seen Kenny for years, so we’ll move on from that.

Do you consider yourself a Star Wars fan?
I didn’t really used to think about Star Wars very much. Can you believe that? And then through various events that I was involved in, particularly Star Wars: In Concert, a big symphony orchestra tour [starting in 2009], I experienced the absolutely palpable sensation of affection, enthusiasm, love. And I stood there feeling the fans’ emotion for something that I’d never viewed the way they do it. So now I actually have enthusiasm by proxy.

I’m sure you hear this all the time, but it was an intense thing to have you break into 3PO’s voice on the phone today. It gave me goosebumps.
One of the greatest joys I have is when somebody will come up with their kid and say, “My little boy doesn’t believe you are C-3PO. Could you do the voice?” and so I agree. And I watch their faces as I say, [in character] “Hello, I am C-3PO, human-cyborg relations,” and physically you can see the sound going in his ear and [laughs] going through his brain  – and suddenly he gets it, and the smile is worth every moment of that pain [in the suit]. And one of the nicest things is people who come up to me in the street and say, “Thank you for my childhood.” That is one of the nicest things ever. Ever.