Breaking Bad concluded its fifth season last month, but that hasn’t changed the rabid loyalty of the show’s fanbase. At this year’s Austin Film Festival, the Writers Guild Foundation featured an exhibit on the screenplay for “Felina,” the series finale written by creator/showrunner Vince Gilligan. One fan was able to capture photos of the script’s final two pages, which he posted to Reddit, and the images reveal interesting insight from Gilligan on the meaning behind some of the episode’s most debated scenes.

The 10 Most Memorable Murders on ‘Breaking Bad’

Gilligan writes descriptively about several dialogue-free scenes (spoilers ahead), including the heroic shot of once-enslaved meth cook Jesse (Aaron Paul) driving aggressively into the night. “From here on, it’s up to us to say where he’s headed,” Gilligan writes. “I like to call it ‘something better’ and leave it at that.'”

In post-Breaking Bad interviews, Gilligan has often labeled Walter White’s cooking equipment with a Lord of the Rings reference, calling the lab “his precious.” And that statement is echoed in the script during the closing scene of Walt (Bryan Cranston) gently stroking the equipment in the Nazis’ lab: “Walt is back where belongs,” he writes. “He’s back with his True Love.” Gilligan pens Walt’s death scene as a tender embrace between two old friends, describing his final facial expression as “one of faint satisfaction.”

The close-up shot of Walt’s dying hand is written as follows: “Walt’s hand rests against (the vat) like a cowboy’s hand rests on the neck of his horse.”

Though Breaking Bad itself may be in the past, the show’s mythology will live on with the Saul Goodman spinoff Better Call Saul, which will be overseen by writer-director (and Breaking Bad veteran) Peter Gould. 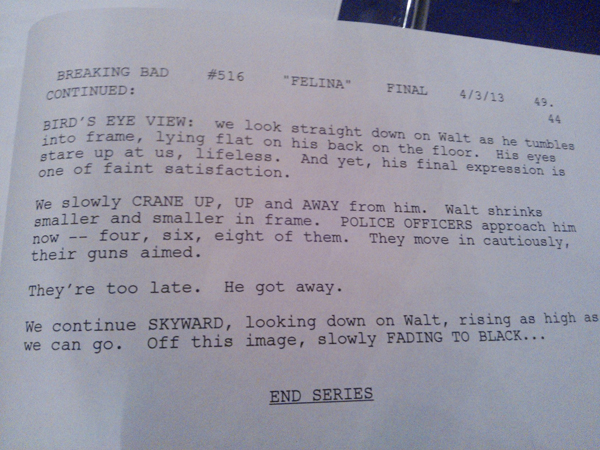