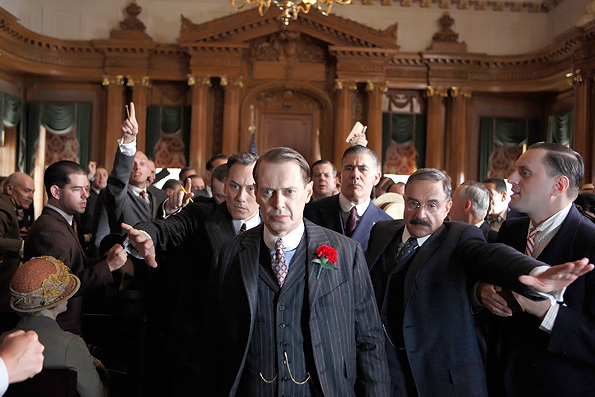 After Gillian and Jimmy took their mother-son love to a harrowing new level last week, we knew that topping the incest revelation would be next to impossible. Consequently, “To the Lost” stuck to the traditional season-finale formula: A captivating climax with plenty of open-ended story lines to keep us salivating until the Prohibition-era series returns for a third season.

Mob Wife
Conflicted about her compliant role in Nucky‘s criminal activities, Margaret meets with Esther Randolph. In a heated scene, the show’s two strongest female characters go head-to-head, each exquisitely arguing her case. Margaret reminds the assistant U.S. attorney that she was the victim of an abusive husband, and that Nucky has “never been cruel” to her. Randolph counters with the fact that he’s hurt other people. Margaret contends that she has children to look after, which is the paramount reason why she remains with Nucky.  But the childless Randolph, who doesn’t understand how a mother could place the needs of her children above the law, volleys back with a moral question: “And does their well-being trump everyone else’s?” It’s difficult to see how either stance could be considered “wrong” here.

That evening, prompted by his lawyer, Nucky appeals to Margaret’s religious sensibilities with the most unromantic marriage proposal ever: “There is more God in the love I feel for you and those children than in all the churches in Rome.” What makes this scene so complicated is that the love Nucky is professing isn’t phony, but his first priority is to save his neck, which is why he uses the phrasing “I need you to marry me.” If Margaret becomes his wife, she won’t have to testify against him.

After watching Nucky tenderly help Emily practice walking the next morning, Margaret makes her decision. Her private joyful smile belies her outwardly dispassionate acceptance of the proposal – a harsh reminder that it’s still a marriage of convenience.

While Randolph rehearses her opening statement, her words serve as a voiceover to a montage of Margaret and Nucky’s quickie wedding, as well as Jimmy and Richard Harrow‘s murder of interim county treasurer Jim Neary, a key witness for Randolph’s prosecution. Cut to Nucky’s trial, in which Randolph accuses the defense of witness-tampering. Even though Randolph’s allegation is accurate, the judge declares a mistrial. Obviously no one wants to see Nucky go to prison, but I really hope this isn’t the last we see of Esther Randolph. If anything, there’s still the Van Alden murder case.

Speaking of the on-the-lam Prohibition agent, after fleeing last week’s arrest, he turned up in Cicero, Ill., with baby Abigail and his Swedish nanny, Sigrid, under the guise of “Mr. and Mrs. Mueller.” If you know your Al Capone history, it’s unlikely the writers’ decision to place Van Alden in Cicero was a coincidence.

That night, an ebullient Nucky informs his wife that his deal to build new roads has been approved by Congress – translating to a financial windfall. He reminds Margaret to sign the land back over to him (which he had put into her name for safekeeping when jail time was still a possibility). Yeah, that’s not going to happen, Nucky. Do you have any idea how much power you’ve put into this Machiavellian woman’s hands by marrying her?

A couple of days later, as Nucky holds a champagne toast with Mayor Bader at the site of a new highway, Margaret signs the deed over – not to her husband, but to St. Finbar’s Church. Ever the enigma, ever the Catholic, Margaret is clearing her conscience over not testifying against Nucky, and I can’t wait to see what a mess this self-righteous gesture makes of their marriage come season three.

Honorable Discharge
With his wife murdered, his father dead by his own hand, and a mother who has irrevocably destroyed any chance he has ever had at happiness, it’s hard to blame Jimmy for wanting out of this life. The fallen prince of Atlantic City knows the end is nigh, so he spends the episode settling his debts.

He gives Chalky his due by delivering the three Ku Klux Klansmen who shot up his warehouse and getting the governor to drop the murder charges against him. Chalky, in turn, calls off the workers’ strike. As he leaves, Jimmy asks Chalky to set up a meeting with Nucky. Richard, who sagely senses his friend’s intentions, warns Jimmy that trying to make amends with the man he tried to kill is futile: “Whatever you do to try to change things, you know he’ll never forgive you.”

The following day, Nucky visits Jimmy, who makes a last-ditch attempt to reconcile with his former mentor by telling him that he regrets not killing the Commodore sooner – and that Eli is responsible for putting the hit on him. Nucky halfheartedly assures the still-distraught Jimmy that he’ll keep his ear out for the whereabouts of Manny Horvitz, but his frosty demeanor affirms that Richard was right in his earlier observation (plus Nucky already had a clandestine meeting with an in-hiding Horvitz at the start of the episode). So when Jimmy convenes with Leander Whitlock to settle the Commodore’s affairs, it’s no surprise that he destroys the only will his father had, which left everything to a former maid. With no will, the Commodore’s estate goes directly to Jimmy, and in the event of his death, Tommy.

Jimmy’s next order of business is to demand that his cronies, including Jim Neary, recant their testimonies against Nucky. When Neary refuses, Jimmy and Richard pay him a visit at his office and force him at gunpoint to type up a statement indicting Eli for making him falsify voting records. Richard then shoots Neary, making it look like a suicide, thus rendering the position of county treasurer available to Nucky once again.

A couple of nights later, Jimmy gets a call from Nucky, who claims to have captured Horvitz. Just when we think Nucky is going to help his former protégé after all, we figure out it’s all a setup – when Jimmy gently deters Richard from joining him at the meeting location. Richard is crestfallen, because he knows his friend won’t be coming back. After Jimmy leaves, Gillian notices that Tommy is now wearing Jimmy’s dog tags around his neck. Without missing a beat, Boardwalk Empire’s Lady Macbeth  immediately begins grooming her grandson to take Jimmy’s place: “You’re going to be a big man in this city one day,” she tells him. That poor kid is doomed. Watch over him, Richard.

In a torrential downpour, Jimmy meets Nucky and Sleater, who have brought Horvitz along as an ostensible prisoner. But Jimmy knows it’s a bluff. Even when Nucky brandishes a gun, the unarmed Jimmy is eerily tranquil, explaining that he “died in the trench, years back” and he’s at peace with his fate. Nucky, however, is not, and he grows agitated at Jimmy’s Zen-like behavior, culminating in his shooting the man he once considered a son in the head. As the rain laps Jimmy’s motionless face, Nucky gets the last word before firing one more bullet: “You don’t know me, James,” he hisses. “You never did. I am not seeking forgiveness.” And that’s where Nucky is dead wrong. Jimmy knew Nucky would never forgive him for his betrayal, so the best he could do was return everything he had taken from him. But by killing Jimmy, Nucky not only re-establishes himself as a violent mob boss to be reckoned with, but he puts Atlantic City’s most tormented soul out of his misery.