Standing in the bay of a speeding Wakandan jet, a member of the African nation’s special forces unit – the Dora Milaje – advises their king, T’Challa: “Don’t freeze.” Calmly, the leader replies “I never freeze.” He’s assured, regal, radiating a near subzero-temperature sense of cool. And then, donning the mask of the legendary superhero known as the Black Panther, he torpedo-drops from the sky. A car explodes beneath him. He effortlessly somersaults through the air, lands sideways on a building in a neon-lit metropolis, races along the building’s wall and sails right onto the speeding car. Then the Avenger skewers the driver’s side tire and tosses it away like a bottle cap. Screen time: 10 seconds. How long have we been waiting to watch that moment become a reality? A lifetime.

Literally from the jump, director Ryan Coogler and Co. make it clear that we will be watching a black superhero fully in control and completely occupying the center-stage spotlight. Watch Chadwick Boseman’s Black Panther in Captain America: Civil War, and you’ll see a charismatic character who fills a void in the conflicted do-gooder group. Watch the new trailer, however – the one that dropped months ago for his stand-alone film – and you’ll see someone with the arrogance of Shaft, the coolness of Obama and the hot-headed impulsiveness of Kanye West. This T’Challa is accessible, awe-inspiring and perhaps most importantly, human. “I think the question that I’m trying to ask and answer in Black Panther is, ‘What does truly mean to be African?'” the filmmaker recently told Rolling Stone. “The MCU has set itself in the real world as much as possible – so what does it mean for T’Challa to move around as this black man in a movie reality that tries to be a real world?”

All of which means that, after decades of trying to nail the modern black superhero, we may finally be getting what we’ve asked for – and getting it right. This journey hasn’t been without effort. The Blaxploitation films in the 1970s gave black audiences their own heroes: Shaft, Cleopatra Jones, Coffy, Slaughter, Foxy Brown. They were inner-city vigilantes, detectives, nurses and ex-cons that waged anti-establishment wars against authority, drugs, gangs and corruption – one-man (or woman) hit-squads operating against the real-world political backdrop of Nixon’s “law and order” campaign. Occasionally, movies like Shaft Goes to Africa, where Richard Roundtree wears an African dashiki and is equipped with a large unassuming staff that’s a piece of advanced tech, and Dolemite (that broad hat, that flashy suit pimp-style outfit) had their protagonists don something like costumes and adopt something close to alter-egos to mete out justice.

These black men and women didn’t cower in the face of danger, white power or guns; their combination of sex appeal and swagger made many audiences fall in love with them. To say that mileage may vary among these portraits of sticking it to the Man would be putting it mildly. But in hindsight, you can see how the Blaxploitation movies influenced a
generation of black musicians and artists by selling a profoundly Afrocentric image, as well as spawning a legacy that can be seen in everything from hip-hop to stand-up comedy. And though the Black Panther first appeared during the Civil Rights era, the main wave of black superheroes that followed – think Luke Cage, Black Lightning, the Falcon, Storm of the X-Men – were children of the Blaxploitation age. They just weren’t getting screen time. At all.

In the Nineties and the early 2000s, attempts to make black superhero movies tended to play like Blaxploitation-lite, running the gamut from intentionally hilarious (1993’s Meteor Man and 1994’s Blankman) or hilariously bad (Steel and Spawn, both 1997). They were usually analogues of white superheroes like Superman and Batman at best, and a one-note joke at worst. The one exception, the Great Black Hope, was 1998’s Blade, the first in a series about a leather-clad, mixed breed vampire hunter played by Wesley Snipes. It was critically embraced, commercially successful ($333 million in box-office receipts) and a high-water mark for an obscure superhero character in from an obscure comic book horror series. The franchise ended on a sour note – but it also provided a blueprint for what would become Marvel Studios’ eventual MCU pop-culture takeover.

Still, even Blade’s success wasn’t enough to get more top-tier black superheroes films on the big screen. Audiences had to be content with Halle Berry’s African-born mutant superhero Storm, Don Cheadle’s War Machine, Anthony Mackie’s Falcon – strong performances that still had the whiff of consolation prizes. Hollywood grapevine chatter pondered if Will Smith could play Captain America and Donald Glover campaigned to be cast as Spider-Man; cue widespread backlash from a largely white mainstream fan-base. The less said about poor Michael B. Jordan in that ill-conceived Fantastic Four reboot, the better. 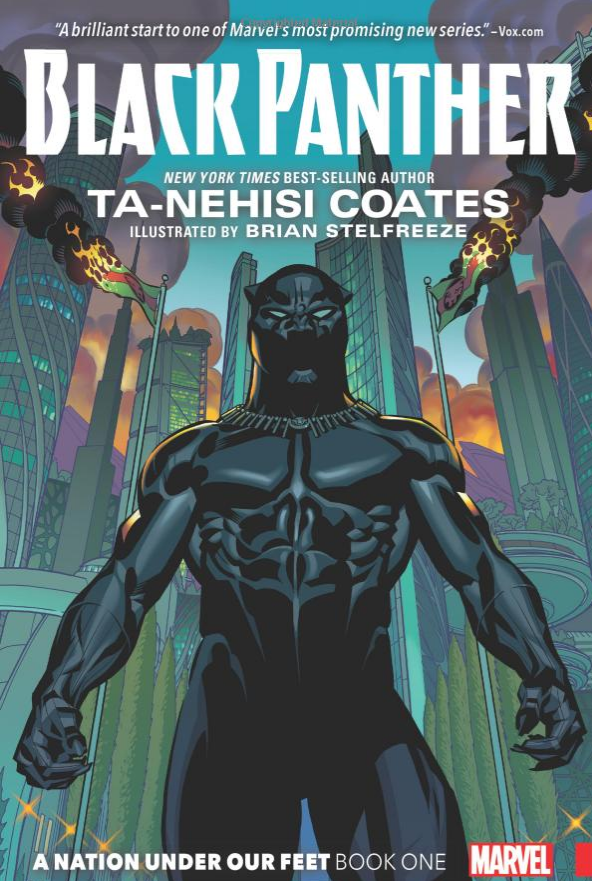 Yet Black Panther already feels different from all of this. Coogler has set out to do something with the modern black superhero that all previous iterations have fallen short of doing: making it respectable, imaginative and powerful. The Afro-punk and Afrofuturism aesthetics, the unapologetic black swagger, the miniscule appearances from non-black characters – it’s an important resetting of a standard of what’s possible around creating a mythology for a black superhero. The trailers point to a new direction for depicting not only black superheroes, but also how we imagine our heroes. He’s not being played for laughs. He’s not a sidekick or born out of dire circumstances. His story, one of an ingrained birthright, legacy and royalty is a stark difference for how we tend to treat most black superheroes – and black superhero movies.

The novelist Chimamanda Ngozi Adichie talks about “the danger of a single story” – about Africa, about black brilliance, our humanity and the black experience for too long. There would never be a time when this movie’s creation wouldn’t mean something to black people in particular, and the inevitable backlash that this movie will receive for its celebration, existence and confidence in blackness will be a reminder that there are no new conversations, merely new opportunities to remind us of who we collectively are. Yet that won’t matter because the people this movie will speak most deeply to – a rainbow-coalition cross-section of black comic book readers, African-American movie audiences, Boseman/Jordan/Bassett/N’yongo fans, black-culture connoisseurs and pop-culture nerds – will see something of themselves in this movie. They will also likely be both familiar and resistant to the disdain it will receive for merely existing. Like anything black in America, Black Panther will be politicized for being black, which is to say for being and for announcing itself as a having a right to be here and to be heard.

Since the dawn of the modern Golden-Age superhero, we’ve been treated to over 30 iterations and appearances of Superman, Batman and Spider-Man (multiply that threefold if you count cartoons, cartoon movies and video games). We’ve had a stand-alone Howard the Duck movie, and a supergroup with a talking raccoon and a sentient tree as central characters. Wonder Woman, one of D.C’s most iconic characters created in the 1940s, got a TV show in the 1970s … and didn’t get a movie until last June.

Fast-forward to 2016, however, and you can stream Netflix’s unapologetically Afrocentric Luke Cage series, while shows like Cloak and Dagger, Black Lightning and the recently-announced series Raising Dion (co-produced and – starring Michael B. Jordan about a single mother discovers her young son has magical powers) in various stage of production. And now, finally, we have a Black Panther movie, one set to open on thousands of screens and get the full Marvel marketing-blitz treatment.

As a child in school, I rarely reached for the black or brown Crayola crayons in my superhero coloring books; I have a lifetime’s worth of Halloweens where I weighed how often I could or should dress as the white superheroes. I couldn’t find ones that looked like me both outside of and underneath the mask. An entire generation of children will now know that a black superhero, society, imagination and power can exist right alongside Peter Parker, Steve Rogers and Bruce Wayne. An entire generation of children will not know what it feels like to not see themselves reflected back on costume racks, coloring books or movie screens. We’re at a pivotal time where these characters and stories are coming not out of permission or obligation, but necessity.

It has been someone’s time before again and again and again. But 2018’s late winter will belong to Wakanda much like 2017’s early summer belonged to Wonder Woman. We’ve been waiting to see ourselves onscreen, flying through the air and running across buildings and dodging laserblasts from bearded colonialists our entire lives. The future is Ryan Coogler, Chadwick Boseman, T’Challa, Black Panther. The future begins on February 16th.