When does a story end? More important: When is a story supposed to begin?

Die Hard, arguably the greatest man-fights-terrorists-in-a-skyscraper movie ever made, begins on a plane with its scraggly hero being lectured about his feet. It’s revealed, almost immediately, that our man John McClane has been a blue-blooded member of the NYPD for 11 years — we don’t know a damn thing about a single one of his cases, but it’s clear from the lines on his face and the exhaustion in his voice that some of them were never closed. By the time he lands in Los Angeles, you know that McClane needs a vacation, and when the two words of the title are superimposed over baggage claim, you know that he’s not about to get one.

Four sequels later — the last two of which have nothing in common with the original save for Bruce Willis — it feels like the character is now less familiar to us than he was at LAX. The original movie provided the template for the modern action movie. The franchise that sprouted in its wake provided the template for how a brand-name blockbuster can profitably dissolve into diminishing returns.

But the kiss of death didn’t come until yesterday morning, when Live Free or Die Hard director Len Wiseman tweeted this threatening image, carefully created with the latest of edition of KidPix. The big surprise here isn’t that Fox is shamelessly continuing to milk the series despite the fact that domestic audiences have all but abandoned it, nor that the studio has turned to the man partially responsible for irreversibly neutering one of the most iconic action heroes in cinema history; it’s that the next Die Hard movie is going to be a prequel. Given that John McClane doesn’t like flying, it’s hard to imagine him being thrilled about a quantum leap. 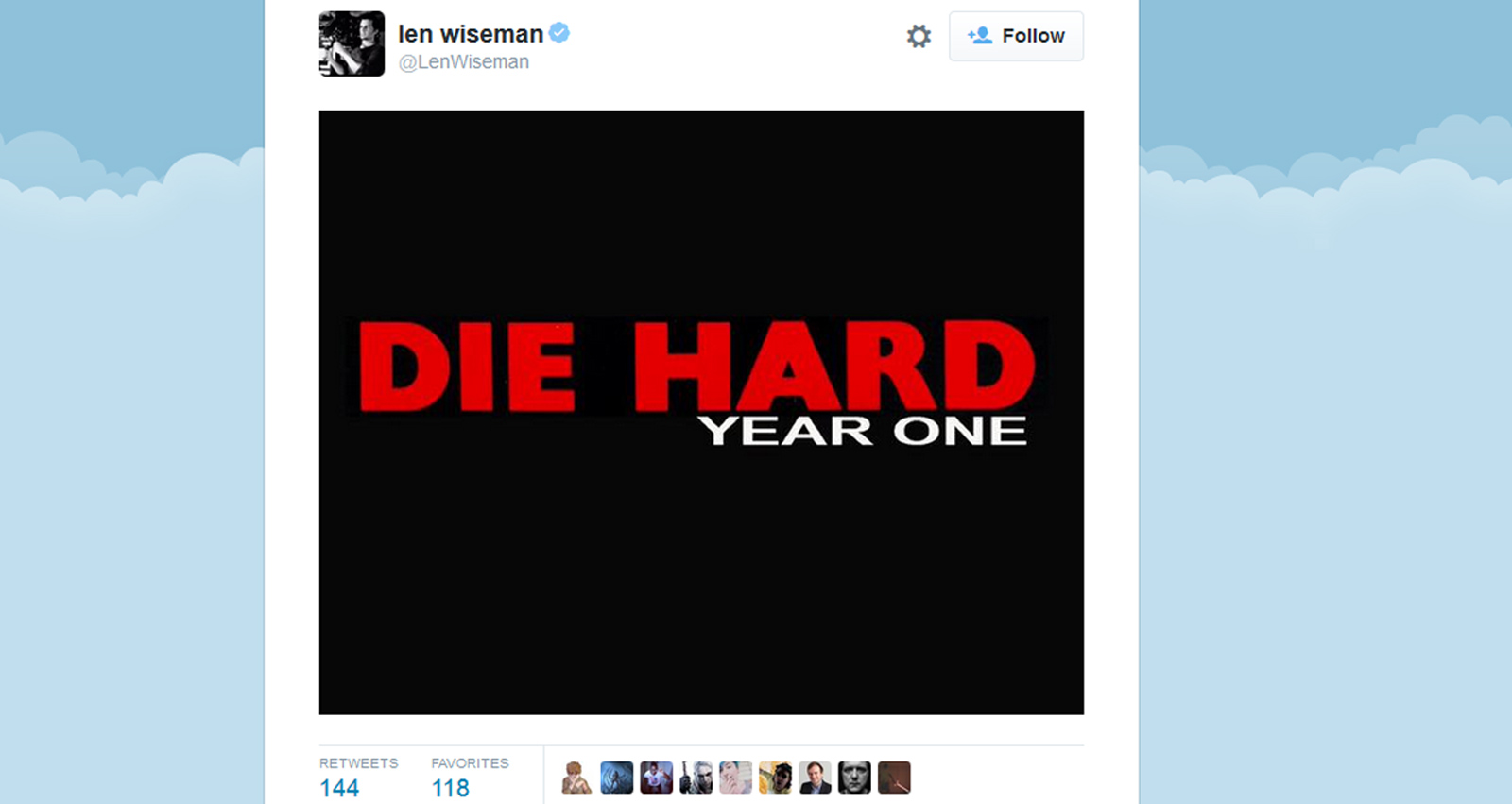 Needless to say, the response has not been kind. (One Hard-head may have put it best by simply linking to this video of a hippopotamus farting.) But what’s interesting about how die-hard Die Hard fans responded to this toxic airborne disaster of a news item is that they’re not asking Wiseman to consider a different route — they’re asking him to let the series die. This isn’t a matter of creative differences, or of Star Wars obsessives being upset that Colin Trevorrow had signed on to direct Episode IX.  This was a family asking someone not to rob a loved one’s grave.

The fans recognized something that Wiseman either couldn’t, or didn’t want to: A prequel isn’t a Hail Mary pass, when you’re six points behind, and there’s 12 seconds left on the clock. It’s what you try after you’ve already lost, the game is over, and the fans have all gone home. Prequels aren’t about resuscitating a franchise, they’re about embalming them. They don’t kill franchises so much as confirm which ones are already dead.

Despite what it’s title might suggest, Die Hard: Year One is not about John McClane’s time as an infant, but will instead focus on a younger version of the iconic action hero — played by a much younger actor, probably someone British — fighting crime in the late 1970s. The biggest problem here isn’t that a director couldn’t make a good movie of this if he tried; someone couldn’t make a good movie of this even if he wanted to. Central to the premise of the original Die Hard is that McClean, though a veteran of the police force, is in way over his head. He isn’t Rambo or James Bond, he’s just a stressed out New Yorker who wanted to go to the coast and have a few laughs. Deadline‘s story about the project observes that Wiseman’s film will show “How [McClane] became a die hard kind of guy,” but the original movie is about how McClane became a die hard kind of guy. That’s why it’s called Die Hard.

And that’s why the very concept of a prequel feels so inherently cynical: The vast majority of them unfold like reboots that have been strip-mined of their ambition, their makers aspiring to accomplish nothing more than to safely return you to where you started. That’s what you hope to achieve with a minivan, not a movie. It’s no coincidence that several of the best prequels ever made (i.e. Final Destination 5 and The Good, the Bad, and the Ugly, to name two completely dissimilar examples), either ignore their place in a larger continuity or protect it like a plot twist.

A prequel isn’t a Hail Mary pass, when you’re six points behind, and there’s 12 seconds left on the clock. It’s what you try after you’ve already lost, the game is over, and the fans have all gone home.

Perhaps that’s one of the reasons why, despite Hollywood’s ongoing obsession with serialized filmmaking, prequels weren’t particularly common for years — at least in an undisguised form. (You may insert the requisite The Godfather, Part II reference here.) But they’ve slowly become an epidemic, a way to extend a series’ lifespan and corporate bottom line by scuttling backward when it seems impossible to move forward. Monsters University, which suffered from the lowered stakes that threaten Year One, was unusual for how baldly it copped it to a Muppet Babies mentality. Peter Jackson’s Hobbit films proved that prequels can still be problematic even when unimpeachable source material exists to support it. (There’s a reason the novel doesn’t include four chapters about Legolas’ love life.) Ridley Scott’s Prometheus promised to answer questions that Alien fans would rather ask themselves or not at all — Where did xenomorphs come from? Who was the Space Jockey? Can Michael Fassbender convincingly play an android? — only to prove that in space, no one can hear you navel-gazing. And as for the Star Wars prequels…we’ll let Patton Oswalt speak for us all.

Indeed, at a time when prequels are widely understood to be the craven, transparent cash grabs they are, studios have begun to invent rhetoric to disguise their new attempts. “Origins” has become the ideal rhetoric for an entertainment era obsessed with shared universe storytelling, the term used to justify revisionist takes on everything from Wolverine to Leprechaun, ostensibly endowing these lazy riffs with the mythic quality that’s lacking from the product itself. And just when it seemed like it couldn’t get any worse, someone in Hollywood recognized that you don’t actually need a pre-existing franchise to make an Origins film, only a certain degree of cultural familiarity. Enter Robin Hood: Origins, a gritty look at the unknown/completely fabricated story of how the Prince of Sherwood Forrest met the rest of his Merry Men. Prepare to rue the public domain.

But for the most part, prequels are typically reserved for reboot-resistant franchises that have a rich core mythology (superheroes), have been buried long enough to be nothing more than the skeleton of their cultural cachet (the new Planet of the Apes), or — as is the case with Die Hard — are too inextricable from their star to survive a reboot. These movies are Bruce Willis. They’re his thinning hair, his weary scowl, how even in the most intense action scenes his eyes seem to be saying “Can’t I just sweat through my wifebeater in peace?”

Fox understands that, and worked within those parameters for as long as they could, inventing fully grown children for McClane in two consecutive installments as a transparent way of delaying his inevitable replacement. (One of them was even played by Jai Courtney, the international face of artistic surrender.) But there are only so many surprise kids he could reasonably have before a prequel became the last remaining option to keep things going. Willis is reportedly set to appear in Year One in order to ease the transition and disabuse audiences of the notion that the film isn’t just a reboot that lacks the conviction required to stand on its own. But just because you can imagine what might have happened before a film began doesn’t mean that it’s part of the story you should be telling.