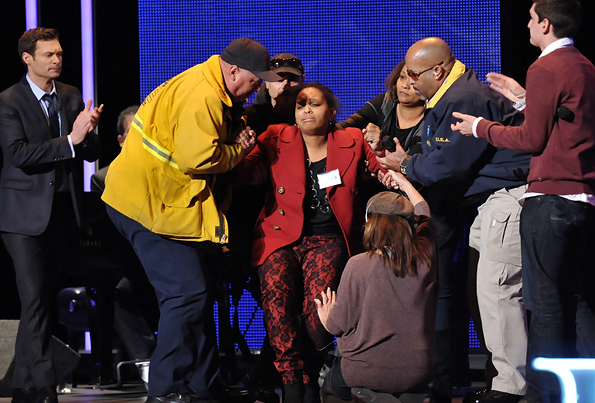 Welcome back to American Idol. I know you’ve been popping Xanax all week due to the overwhelming anxiety of not knowing what happened to the Betties and all the other groups struggling to survive the Idol plague. What? You don’t remember the Betties? The girl group who stayed up fighting and/or barfing all night, desperate to go through to the next round of Idol? You don’t remember the Big Cliffhanger?

Don’t worry. Idol knows we have the attention span of a caffeinated flea, and they replay almost the entire episode before we are reminded that the Betties are one of the 42 groups competing today. They are singing first, and the Idol Ebola is not doing them any favors. Jennifer Malsch and Cari Quoyser make it through, while the rest are sent to die in the comfort of their own homes. Cherie Tucker, who has to see the medic three times and throws up right after the performance, feels like she was robbed, but I don’t think you can sue a flu bug in court. Not yet, anyway.

Next to face the judges is a group starring Reed Grimm (a.k.a. Mr. Boop boop dee doop), Creighton Frakes, Jen Hirsch and Aaron Marcellus, the music instructor from Georgia who sets J. Lo’s heart aflutter. By the middle of the song the audience is standing, and then the judges are on their feet, and everyone is super-excited over harmonies and background singing and boop boop dee dooping. Obviously they are all through to the next round.

The next group on stage is headed by Brielle Von Hugel, whose mother has been adamantly not stage momming – not even when she is telling Brielle to take charge and pointing out that Kyle Crews can’t sing, but Joshua Ledet can. Shannon Magrane‘s performance was dubbed show-off-y by J. Lo, but in a good-natured way, and everyone is safe except for Kyle, despite having been told just weeks before that he was one of the best male singers the judges had seen. Kyle claims that the song was in the wrong key, but we all know Brielle’s mom voodoo-dolled him even though she is pretending to be nice to him in front of the cameras. Luckily, the Idol editors are there to remind us that she is a dirty, dirty liar.

Then, tragedy: the Idol Ebola hits again, and Patient Zero Amy Brumfield‘s group mate Jackie Cera faints and almost can’t perform. Then she does perform, when Ryan Seacrest lets her touch the hem of his blazer. Unfortunately, the group’s performance is terrible, and only Methenee Treco goes through. That means Amy Brumfield has to leave the roof over her head and return to her tent in the woods in Tennessee.

Seacrest comes on to assure us that multiple contestants who forget the words to their songs is completely normal and not a symptom. Move along, folks, nothing to see here. Alisha Bernhardt, the lonely cop from last week, and Christian the Puker and their entire group are all cut for delivering a performance that is the aural equivalent of Ambien. As they walk off stage, Alisha makes a plea to the judges to be on their personal security details, which you can either blame on the economy or her bunny-boiler tendencies.

David Leathers Jr. and Eben Franckewitz deliver a perky performance with their group, managing to wake up the judges. They move the singers to the next round quickly so we can get on to the Big Drama they have been teasing all night. As Johnny Keyser and his group rehearse, Imani Handy goes down. Everyone prays, and then she is up and ready to perform, despite being wrapped in a hobo blanket and not looking good. They all head out on stage and get half way through the song when Imani collapses again, causing Ryan to swear on national television as he and Imani’s mom run onto the stage, followed by medics. Local hero Keyser bravely keeps singing despite the pandemonium on stage, until Randy Jackson puts him out of his misery. The judges all mutter was it nerves, was it nerves? As if that is some deficiency on her part and not the actions of a brave young woman willing to sacrifice her health for her dream. Imani cries and swears she will never collapse on stage again, but that’s not enough for the judges. They send her home for her own good, obviously.

You know who’s also going home? The chucklehead who quit his job to pursue his dream while his wife was seven months pregnant.

The last group to perform features Heejun Han, Phillip Phillips and a talking Cowboy Hat who keeps going on about democracy and America. They all make it anyway, and Heejun has to apologize to the Cowboy Hat and his parents for saying bad things about him on national television.

The next day is Solo Day, and there are 99 contestants still in the running to be America’s Next Idol. Randy Jackson and Steven Tyler warm up the band and the singers with a rousing rendition of “Walk This Way,” because based on his performance of the national anthem, it’s the only song Steven actually knows.

What follows are a series of impeccable performances by Joshua Ledet, Colton Dixon (with the world’s stupidest haircut), Creighton Frakes, Phillip Phillips and his guitar and gitchy legs and Jen Hirsch delivering a full torc- song rendition of “Georgia on My Mind” as J. Lo and Randy nod along and Steven smiles to himself. The judges are on their feet to applaud her effort. Ryan returns to deliver the latest drama: rain! Also thunder.

Apparently some of the contestants have been raised in HabiTrails that don’t have weather, because their performances are thrown off by thunder. Reed Grimm delivers a solo performance while accompanying himself on the drums, earning a remark that he sounds like Casey Abrams, lucky him. Then Shannon Magrane startles the judges with an outstanding, mature performance that surprises the heck out of Jennifer and gets Steven salivating.

Followed by Skyler Laine, who shows those candy-asses who were felled by the flu how it’s done. After spending hours in the hospital and getting pumped full of fluid, she wails out a song that earns accolades from Steven. Rachelle Lamb isn’t comforted by J. Lo’s assurance that “there’s no reason to be nervous,” as she screws up, and Adam Brock (a.k.a. the self-proclaimed America’s White Chocolate) gets Steven begging for more.

The judges make their decisions while the contestants are shuttled into four rooms, where they are not even given chairs, because they don’t deserve chairs. Two rooms are filled with people we have been following since the beginning, people who have gotten lots of camera time. The other two rooms have a bunch of people we barely remember or have never seen before. Wonder who is going home? The judges deliver the good news to cheers and the bad news to the tune of Gary Jules’ “Mad World” cover, which immediately dissolves the tension into deep, deep depression. Come back tomorrow for unprecedented performances and unparalleled drama, new and improved by a move to Las Vegas!