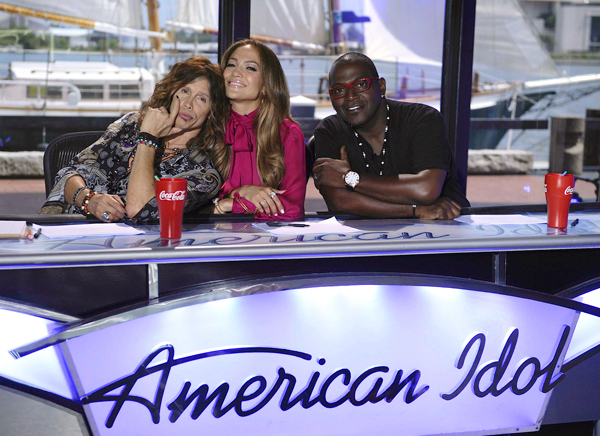 Welcome to the 11th season of American Idol, or as judge Randy Jackson insists on calling it, “Season One One.” Just because he’s a judge doesn’t mean we have to make that a thing, right? This season of Idol kicks off by reminding the viewers how very, very long this show has been on the air. It’s been on so long that some of this year’s participants can’t remember a time when Idol wasn’t on the air. In short: You’re old.

Judges Randy, Jennifer Lopez and Steven Tyler come to Savannah, Georgia for the first round of auditions. (Side note: When is The Bachelor going to let us in on their auditions?) Tyler arrives in his usual attire of feathered hat and shirt open to his belly, but before we can set up a Kickstarter to buy him a button, the first contestant comes out. David Leathers, Jr. is 17, but he looks like he would get carded for a showing of Chipwrecked. However, David bested last season’s winner, Scotty McCreery, in a singing competition and he may have the chops to do it again. When he finishes his song, the judges stare blankly at him in shock and without even voting, handed him a ticket to ride. Luckily there’s no height requirement.

Gabrielle Carrubba, Connecticut Yankee and a champion tap dancer who has been competing since, well, something called Diaper Dancers, makes it through on her merits and because she didn’t tap dance. Back-to-back performers are sent to Hollywood, which meant, of course, that Jessica Whitely, a beautiful 16-year old with Pantene shiny hair, is destined to fail. She sings likes she was doing a drunk Roseanne Barr impression in the shower, which in the words of Randy, “Was not remotely good.” This does not dissuade her from offering to try out again in Texas.

Shaun Kraisman comes to audition both for the show and for a job as a Ryan Seacrest impersonator at a Russian amusement park. Ryan and Shaun drag the not-at-all-identical twins act on and on, even letting it spill over into the judging room. Then Steven opens his mouth and eats both of them and we got on with our lives.

Fifteen-year old Shannon Magrane is pretty enough to get Steven to smile at her like a lecherous crocodile, or, you know, an aging rock star. She’s sent to Hollywood after singing in front of her cult-like family (so many girls singing and clapping) with her mother mouthing the words and her dad dead-eyeing Steven from the back. After a montage set to “Devil in Disguise” of the beautiful people who can’t sing a note, we meet Amy Brumville from Tennesssee who lives “in a tent in the woods.” If there’s any doubt in your mind that the producers would send a camera crew out to record this American Tragedy while Elliott Smith’s “Angeles” played in the background, you have never watched Idol before. By the time the Tobacco Road scene ends, we’re all praying to Walker Evans’ ghost that she could sing. (Luckily she hadn’t traded her pipes for food yet.)

Not going to Hollywood? Erica Nowak, who apparently came to fondle Steven Tyler, and Joshua Chavis, who should have left with dignity after J.Lo said he was cute (and she was married to Marc Anthony!), but ruined it by crying, flipping off the camera and crying some more. Also out is Mawuena Kodjo, who comes to Idol from West Africa via Nashville, where he developed a love of country music but none of the ability to imitate Rascal Flatts. In a xenophobic stunt masquerading as laffs, the producers subtitle him and drag out his inevitable demise. As Morrissey once said, “That joke isn’t funny anymore.”

Colton Dixon, who almost made it to the Top 24 last season, comes to watch his sister Schyler audition, but the judges insist he sing too. They both make it, which causes former contestant Pia Toscano to run to her Twitter account and type ” Yaaaaaaaaay Colton’s back!!!!!!!!!!” because it is something that deserves that many exclamation marks. Joining him will be NBA dancer Brittany Kerr; Stephanie Renae, who is wildly forgettable; intentionally kooky Ashlee Altise; and Lauren Mink, who makes it through because she saw Country Strong enough times to memorize the song and the judges felt sad for her. Special shout out to the girl whose grandma kissed Steven Tyler on the lips while we all watched. Also landing a spot in Hollywood is a guy who made terrible life choices – namely, quitting his day job to pursue his dream, despite the fact that his wife is six months pregnant. Didn’t catch his name, but keep an eye out for the frantic-eyed blond begging for pity. Or a job, with benefits.

Last comes Phillip Phillips Jr. (sadly no sight of Sr.) who belts out both Stevie Wonder‘s “Superstitious” and a countrified version of “Thriller” that’s weirdly watchable. The producers teased his performance both on Twitter and ads, and he did not disappoint.

Come back tomorrow when Idol packs up Steven’s silk shirts and boas, and heads to Pittsburgh.