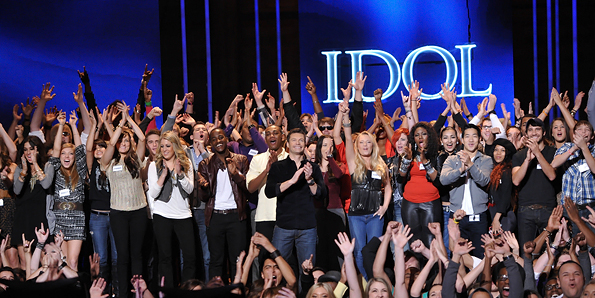 It’s Hollywood week – when the teeming throngs of wannabe superstars have been winnowed down to a single teeming throng of wannabe superstars. There are 309 contestants still in the running to be the next American Idol, and the only thing standing between them and their dreams are Steven Tyler, Jennifer Lopez, Randy Jackson and 308 other contestants.

To kick things off, Steven gives the horde a rousing word of encouragement, “What makes the hottentot so hot? Who put the ape in apricot? What have they got? Courage!” I’ve had more coherent fortune cookies, Steven. Ryan Seacrest calls this a pep talk; I call it dementia.

Ryan explains that for the inaugural day of Hollywood Week, the singers will divide into groups of 10. Everyone will sing a few verses, and then the judges decide who will stay and who will go. Half of the contestants go home today. It would be really dramatic if we actually recognized any of these people.

Ruining my whole point in the last paragraph, up first is someone we actually do recognize: Johnny Keyser from Pompano Beach, Florida via the St. Louis auditions. The white boy with the soul of a soulful white guy with a soul patch once again impresses the judges. To celebrate her return to civilized people (sorry St. Louis), J. Lo is wearing a leather blouse complete with a floppy leather bow. It’s very sado-maso-librarian. Next to sing is Heejun Han, the wiggliest guy in all of New York. He wiggles almost as much as he did during his initial audition in Pittsburgh and talks about his mother’s disappointment. He notes that everyone competing in Hollywood Week is so tall and so pretty, which I’m pretty sure we can thank Steven Tyler for. He does a pretty good Michael Bolton impression and while he claims a lack of confidence, he blows J.Lo a kiss in the middle of the song and nails it. Guess who’s tall and pretty now?

What follows are several women we need to develop some real feelings for stat: Elise Testone with a biker’s face and an angel’s voice, Baylie Brown from Texas who has both the voice and the face of an angel, Baltimore’s Hallie Day (remember the suicidal waitress? Yeah, love her), Lauren Gray from Arkansas, and Jen Hirsch, a girl who opted to wear a tie-dyed tent on national television.

It wouldn’t be Idol if they only showed the good performers, so we are then treated to a montage of all the reasonably good singers who completely miff their big shots and will be talking about this moment in therapy sessions for the next 10 years. Many of them beg. It’s not pretty.

Hey remember Phillip Phillips who wowed with his “Thriller” cover? Barelyyyy, but he’s through to the next round of competition. Then, stage lifer Reed Grimm opts for a gimmicky song choice and bebops his way through “I Got a Golden Ticket” from Willy Wonka and once again he sings it like it’s mashed up with the Frasier theme song. Bippity boppity booooooooo! The judges are still charmed by his quirks. I, however, am not. But for every dream come true, others must end. Travis Orlando must return to nothing, despite being better than either Reed or Phillip, earless Ramiro Garcia (what, that’s how you remember him too) and Wolf Hamlin the mechanic with the most rocking name ever, all fail to make the cut.

New dad Adam Brock sings “Walkin’ in Memphis,” because J.Lo asked him to, and he performs well enough to get through to the next day. Next up is Jane Carrey, a.k.a. Jim Carrey’s daughter, who is not nearly as good as she thinks she is. In fact, she is so resoundingly mediocre that she’s out. Even with her famous father, she is still out. Kinda proud of you Idol.

David Leathers, Jr., is 17 years old, so no jokes about that being his porn name for at least six months. He sings Celine Dion and gets a standing ovation from the audience, a.k.a. his competitors. Even Randy can’t help but woot in the middle of his performance. Following in his talented footsteps is Jessica Phillips the walking sob story with the boyfriend who had a stroke. During her performance Steven is smiling so wide that he looks like he’s going to fall over. She’s in, because the universe doesn’t suck that much yet. Also in is Shannon Magrane – the 17-year old daughter of the major league pitcher who got hit on by Steven in front of her dad – and Creighton Fraker, despite singing like he’s about to drop a deuce on stage. That can be trained out of him, right? Aaron Marcellus from Georgia got Randy all riled up in a good way, and J. Lo looked ready to toss over whatever backup dancer she’s dating to get with him.

Lauren Mink, who works at a center for adults with developmental disabilities, prepares us for her return to Kentucky by saying that her charges would miss her if she succeeded. Her pointless key change in the middle of “Alone” doesn’t help, either. Jeremy Rosado who works in an infectious diseases clinic and despite his claim that he’s a germaphobe who sanitizes all the time, obviously has caught something fatal, because his tongue is bright yellow. Like sucking a Crayola yellow. Their fates are TBD, though, because something very dramatic interrupts the proceedings. 16-year old Symone Black does an admirable job covering Otis Redding, but her performance was not nearly as dramatic as when she fell off the stage while talking to the judges. Not one to waste a cliffhanger, Idol ends and all we know is that Symone fell, they called a medic, and her father rushed from the balcony. You want outcomes? Come back tomorrow. If you really can’t wait to see if she lives or dies, watch this video.