In the wake of Facebook’s $19 billion purchase of messaging service WhatsApp, the social network’s recent $2 billion acquisition of Oculus VR — makers of the virtual-reality gaming headset the Oculus Rift — feels like a real bargain. How exactly Mark Zuckerberg and co. will integrate fully-immersive virtual reality, or VR, into the Facebook experience isn’t known yet. (Some have speculated that you’ll be able to virtually hang out with your Facebook friends, or take online shopping to the next level.) But the Rift — which isn’t commercially available yet—has the potential to change not only social media and address larger societal issues (like being used as a treatment for soldiers for PTSD), but alter the way we consume music, movies, TV, sports and more.

5 Things You Need to Know About SXSW Interactive 2014

When it comes to theorizing uses for new tech, “our imaginations go to the easiest answer,” says Eugene Chung, Oculus’ head of film and media, “but what we’ve learned over time is that innovative, creative people are going to take this canvas and do even more with it. The things that are going to be really revolutionary in VR are the things that we can’t even imagine today.” That being said, we talked to Chung and other experts to come up with seven ways the Rift could shake up the world of entertainment.

1. Frighteningly Realistic Video Games. The Rift was developed with gaming in mind — and all indications are that the titles developed for it are going to be intense. Even the demos can be frightening, says Oculus’ Vice President of Product Nate Mitchell. “We have a demo where you’re standing at the edge of a cliff and your knees actually lock up subconsciously,” he says. And Call of Duty fans beware: Rift-specific games will be so immersive they may take the fun out of virtual warfare. “Watching your friends die, being shot at — I think that’s a little too intense for virtual reality,” Mitchell says, “but there are going to be some people who really enjoy that experience.”

2. Attend Live Concerts Halfway Across the Globe. You want to attend the Fuji Rock Festival, but airfare to Japan is pretty steep. In the not-too-distant future, you’ll be able to watch live shows from anywhere in the world from the comfort of your living room and feel like you’re there. “Now, because cameras are so cheap and can be so tiny, you can flood a concert hall with them — imagine that every single person at the concert had these cameras on them,” says Jeremy Bailenson, founding director of Stanford University’s Virtual Human Interaction Lab. “If they were networked, it could all be stitched into one unified 3D model of the concert.” So you could view the show from almost any angle. Add in haptic feedback (which the Rift doesn’t have), and you could even experience the sensation of slamming into someone in the pit. 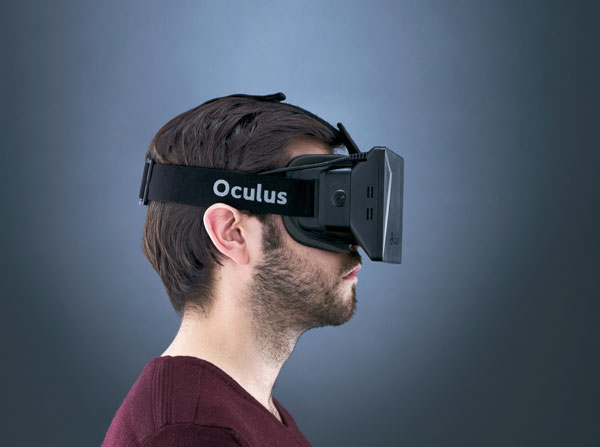 3. Relive Woodstock. Forget live music — how about attending a gig that happened 45 years ago? It would be a “monstrous project that wouldn’t look too good,” Bailenson says, but using actual concert footage and other source material, programmers could create a 3D virtual model of the original Woodstock. “What if you wanted to see Woodstock literally from the point of view of Jimi Hendrix‘s guitar?” Bailenson posits. “What if you wanted to be his pick? Anything’s possible.”

4. TV Shows and Movies You Can Walk Around In. One Seinfeld fan has already created a navigable version of Jerry’s apartment for the Rift. Unfortunately, Jerry, George, Elaine and Kramer aren’t hanging out there —yet. Oculus’ Chung foresees the next step in must-see TV: “You’re in the apartment, and the cast, or some version of them, is actually there. You could have a conversation with them.”

On the cinematic front, Bay Area startup Condition One is gearing up to release Zero Point, the first movie for the Rift—which, in a meta touch, is about the development and promise of virtual reality. You can watch an interactive trailer, which will give you a taste of the experience, here. (Should that version take a while to load, you can watch the regular Zero Point trailer below.)

5. Recast Your Favorite Movie. Chung points out that when it comes to movies for the Rift, stage directors might fare better than film directors, who are used to framing shots. “Theater directors think about this all the time: How do you get an audience to look at the right side of the stage, as opposed to the left side?” Chung says. “Let’s say there’s a murder happening off to your right, but everyone’s looking elsewhere…you could have a bullet whizzing by, and everyone’s now going to be paying attention to that corner where someone’s getting murdered.”

Bailenson predicts that in the future, the viewer will become more of an auteur, or at least a casting agent. If someone creates a 3D model of an actor, it will be possible to put said virtual thespian into another role. “In Goodfellas, what if instead of Ray Liotta you wanted it to be, say, Rodney Dangerfield playing that? Make it slapstick. You can do that,” he says. “Since the movie is recorded with all the animations” — meaning the actors’ movements have already been captured on film or digitally — “the 3D models of the actor just become a variable that you plug in.”

6. Be the Ball. Bailenson says that VR will redefine sports not only for players — before Mike Tannenbaum got fired as the New York Jets’ GM, he and Bailenson had discussed a quarterback training simulation for then-Jet Mark Sanchez — but for viewers as well. Much like with the live concert scenario, an array of tiny, networked cameras, in combination with the Rift, will open up the viewing experience immensely. “Imagine you get to watch the game as Mark Sanchez, from the first-person point of view,” Bailenson says, “and not from whatever cameras Fox chooses to show you the game from.” He adds, “It’s a very disruptive model, because what you’ll never be able to do in the stadium itself is become Mark Sanchez or be the ball.”