Quentin Tarantino can’t help himself. In early December, after spending the second half of 2015 supplying the thinkpiece industry with one piping-hot take after another, the filmmaker confessed to The Guardian that sitting down for a bunch of long-form interview features may not have been such a great idea. “If I keep giving them fish,” he said, “and they’re giving me back chum in 450 different outlets, I don’t know why I’m doing it.” Then less than two weeks later, Tarantino appeared on The Howard Stern Show, where he accused Disney of forcing ArcLight Cinemas to show Star Wars: The Force Awakens at the Cinerama Dome in Hollywood through the entire holiday season, breaking the contract it had to run Tarantino’s The Hateful Eight in 70mm.

Not many filmmakers would have the stones to accuse the biggest studio in the world — distributing potentially the biggest movie of all time — of extortion. But then, not many filmmakers have been on a publicity blitz quite like Tarantino’s this year. As a movie buff, Tarantino has surely seen Bull Durham, but he may have forgotten the scene where Kevin Costner’s veteran catcher consuls Tim Robbins on the finer points of public relations: “You’re gonna have to learn your clichés. You’re gonna have to study them, you’re gonna have to know them. They’re your friends.” Tarantino gave great press this year, supplying an endless stream of lively, candid, provocative quotes that journalists love — and that all public figures are advised never to give. The man doesn’t do platitudes.

Two interviews contained most of the major detonations on pop culture and politics: First, a conversation with Lane Brown for Vulture/New York magazine in August, which may be the best Tarantino interview since his hour with Charlie Rose in 1994; and later a profile piece for T: The New York Times’ Style Magazine in October, written by fellow L.A. controversy-magnet Bret Easton Ellis. But Tarantino’s 2015 didn’t end there. Here’s a rundown of his most quotable lines and the fallout that followed:

On President Obama:
“I think he’s fantastic. He’s my favorite president, hands down, of my lifetime. He’s been awesome this past year. Especially the rapid, one-after-another-after-another-after-another aspect of it. It’s almost like he takes no prisoners. His he-doesn’t-give-a-shit attitude has just been so cool. Everyone always talks about these lame-duck presidents. I’ve never seen anybody end with this kind of ending. All the people who supported him along the way that questioned this or that or the other? All of their questions are being answered now.” —Vulture, Aug. 23

Fallout: “So there you have it, Obama-haters,” wrote Mediaite, “according to Hollywood’s ‘coolest’ director, the time for questioning the 44th president has come to an end.” And indeed, Obama-haters across the right-wing press — The Washington Times, Daily Caller, Newsbusters, Matt Drudge — duly noted that quote in their aggregators, much as Tarantino might plant a plot detail in the first act that will pay off in the third. They would release the Kraken later.

On David O. Russell and lesser arthouse movies:
“I don’t know if we’re going to be talking about The Town or The Kids Are All Right or An Education 20 or 30 years from now. Notes on a Scandal is another one. Philomena. Half of these Cate Blanchett movies — they’re all just like these arty things. I’m not saying they’re bad movies, but I don’t think most of them have a shelf life. But [Russell’s] The Fighter or American Hustle — those will be watched in 30 years.” —Vulture, Aug. 23

Fallout: Quizzed about it by Vulture’s Kyle Buchanan while doing press for Carol, Blanchett gave a diplomatic variation on the Dude’s line from The Big Lebowski (“Well… that’s just, like, your opinion, man”). But at the time, the actress had plenty of defenders: The New York Post did a rundown of all times Tarantino has acted like a jerk, and columnists like HitFix’s Louis Virtel detected sexism in QT picking on movies featuring “women in complex, emotional roles.” The real capper, however, may be David O. Russell justifying Tarantino’s love by releasing Joy, perhaps the most poorly reviewed movie of his career. Forget 30 years. Joy won’t last one Oscar season.

On It Follows:
“It was the best premise I’ve seen in a horror film in a long, long, long time. It’s one of those movies that’s so good you get mad at it for not being great… [Director David Robert Mitchell] could have kept his mythology straight. He broke his mythology left, right, and center.” —Vulture, Aug. 23

Fallout: Mitchell responded by throwing some good-natured shade in Tarantino’s direction, but Vulture’s Buchanan gave the horror-movie director the opportunity to address specific criticisms of the film’s ending at length. And now there are two good sources for It Follows viewers to have all their “WTF?” questions about the third act answered.

On True Detective:
“I tried to watch the first episode of Season One, and I didn’t get into it at all. I thought it was really boring. And Season Two just looks awful. Just the trailer — all these handsome actors trying to not be handsome and walking around looking like the weight of the world is on their shoulders. It’s so serious, and they’re so tortured, trying to look miserable with their mustaches and grungy clothes.” —Vulture, Aug. 23

Fallout: None. The second season of True Detective wrapped up a little over a week before the Tarantino interview ran and most critics hated it, which makes this perhaps the least controversial statement he made all year. But with his praise of another critically reviled HBO show, The Newsroom, in the same interview, the filmmaker quickly lost his allies in the TV criticism business. “Who the fuck reads TV reviews,” he said. “Jesus fucking Christ. TV critics review the pilot. Pilots of shows suck.” He also claimed to have watched every episode of The Newsroom three times, which may be the craziest statement he made all year.

On Scream, a franchise movie he could have imagined himself directing:
“I actually didn’t care for Wes Craven’s direction of it. I thought he was the iron chain attached to its ankle that kept it earthbound and stopped it from going to the moon.”—Vulture, Aug. 23 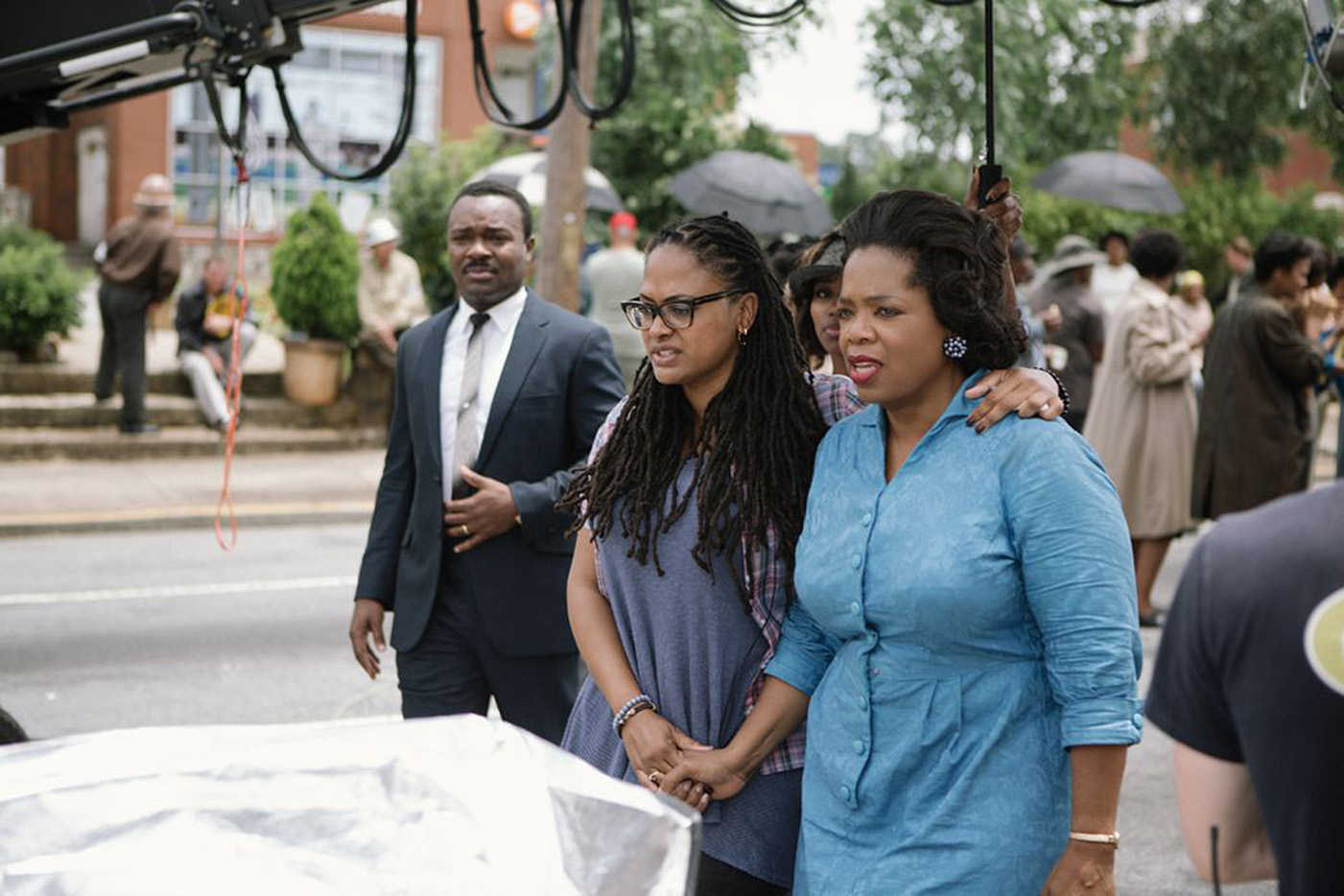 On Selma and its director, Ava DuVernay:
“[DuVernay] did a really good job on Selma, but Selma deserved an Emmy.” —T: The New York Times Style Magazine, Oct. 12

Fallout: Bret Easton Ellis’ “The Gonzo Vision of Quentin Tarantino,” was as much as profile of of the author as it was of its ostensible subject. The lines that follows Tarantino’s quote is all Ellis: “Django Unchained, with its depictions of antebellum-era institutionalized racism and Mandingo fights and black self-hatred, is a much more shocking and forward-thinking movie than Selma, and audiences turned it into the biggest hit of Tarantino’s career. But it was also attacked for, among other things, being written and directed by a white man.” The Selma passage was a mere throat-clearing for the racial criticism that would land the director in real trouble (see more below), but it sparked its own minor tempest.

Tarantino later emailed Indiewire’s Anne Thompson to clarify that he’d never actually seen Selma, and was posing “more like a question” to Ellis about it resembling TV movies of the past. Still, that didn’t keep DuVernay from hitting back in an interview with The Hollywood Reporter in early December: “I was surprised by how surprised everyone was,” she said. “When you look at his work and his persona, there’s nothing surprising about what he said.”

On his black critics:
“If you sift through the criticism, you’ll see it’s pretty evenly divided between pros and cons. But when the black critics came out with savage think pieces about Django, I couldn’t have cared less. If people don’t like my movies, they don’t like my movies, and if they don’t get it, it doesn’t matter. The bad taste that was left in my mouth had to do with this: It’s been a long time since the subject of a writer’s skin was mentioned as often as mine. You wouldn’t think the color of a writer’s skin should have any effect on the words themselves. In a lot of the more ugly pieces my motives were really brought to bear in the most negative way. It’s like I’m some supervillain coming up with this stuff.”—T: The New York Times Style Magazine, Oct. 12

Fallout: And away we go! Tarantino has had a long and complicated history of using the N-word, on screen and in real life — Gawker published a complete rundown this week, in fact — and he also has a long and complicated history of bristling at criticism about it. He poked the hornet’s nest again with the quote above (the word “savage” isn’t terribly well-chosen) and critics of every color objected en masse. In Jezebel, Julianna Escobedo Shepherd helpfully pointed out that at least four prominent black critics — Cord Jefferson in Gawker, Rembert Browe in Grantland, Jelani Cobb in The New Yorker, and Wesley Morris in The Boston Globe — had kind things to say, on balance, about Django Unchained. Elsewhere, Joanna Robinson in Vanity Fair contrasted his comments on race with those of writer-director Lee Daniels and found them wanting; Desiree Bowie of Salon wrote about the dilemma of being a black Tarantino fan; and Nicole Silverberg of GQ sanely advised skipping the Ellis/Tarantino show altogether. 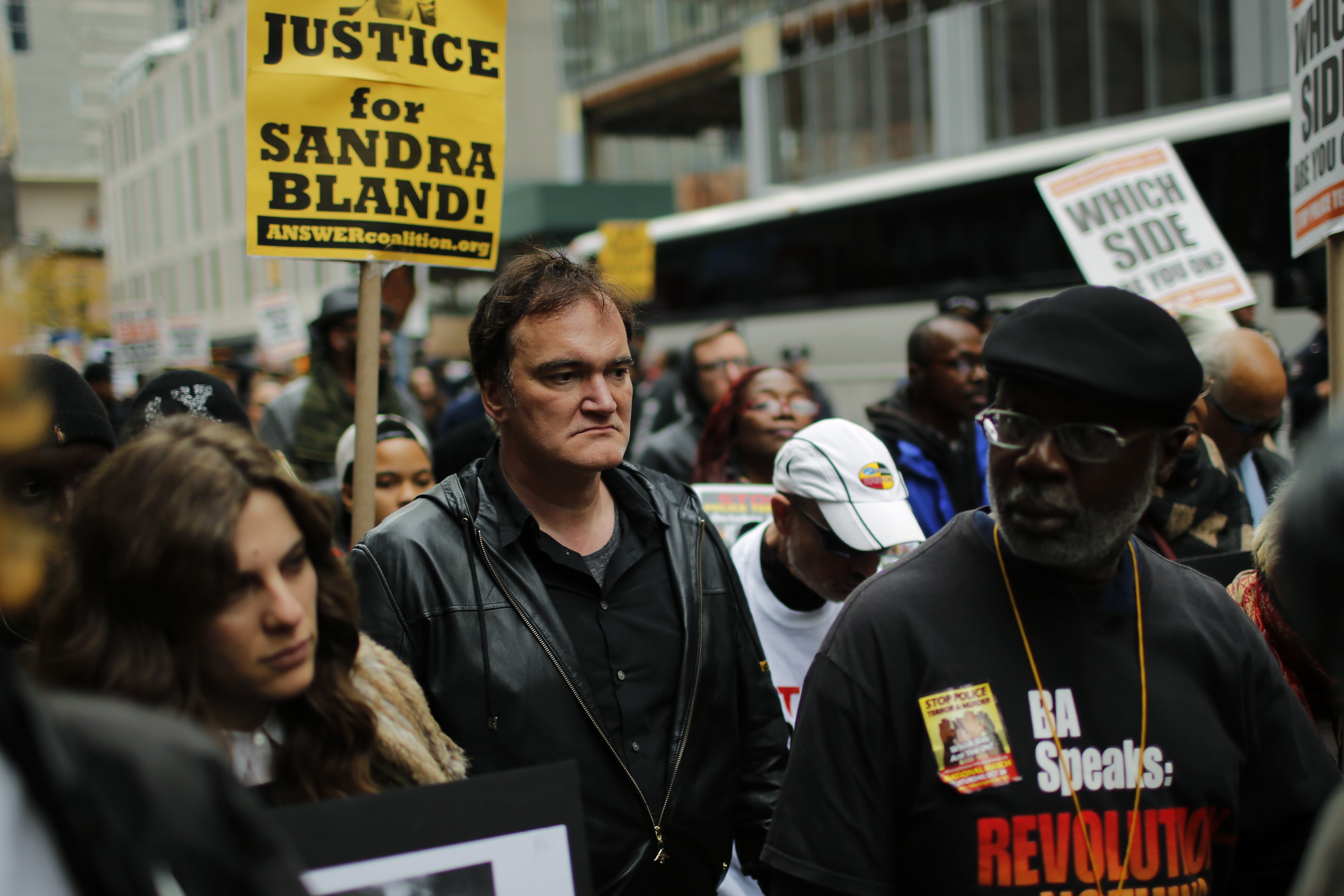 On police brutality:
“This is not being dealt with in any way at all. That’s why we are out here. If it was being dealt with, then these murdering cops would be in jail or at least be facing charges… I’m a human being with a conscience… When I see murders, I do not stand by… I have to call a murder a murder, and I have to call the murderers the murderers.” —Rise Up October rally, Oct. 24

Fallout: Tarantino’s fiery speech at the Rise Up October made him a target for those who confuse anti-police brutality with anti-police. New York police union chief Patrick Lynch called for a boycott of The Hateful Eight, and threatened an ominous “surprise.” (Though labeling him a “purveyor of degeneracy” will sound like a blurb to Tarantino fans.) New York Post gossip king Richard Johnson reported that Harvey Weinstein was furious at Tarantino for stoking controversy needlessly, which The Weinstein Company reps subsequently denied.

Meanwhile, Tarantino continued his media fun run with appearances on Bill Maher and All In With Chris Hayes, and the right-wing attack dogs pounced. Fox News trotted out former NYC police commissioner/convicted felon Bernie Kerik for expert commentary and Breitbart followed with an “exclusive” interview with Tarantino’s estranged father Tony. Controversy may or may not sell The Hateful Eight, but Tarantino isn’t backing down. Nearly two weeks after the rally, he defended himself from accusations that he’s “anti-cop,” telling The Los Angele Times‘ Glenn Whipp that he nonetheless believes that the cops who killed Eric Garner, Walter Scott, and Tamir Rice are murderers.

On Disney:
“They’re going out of their way to fuck me.” —The Howard Stern Show, Dec. 16

Fallout: Tarantino is accusing the Walt Disney Company of “extortion” here. He’s asserting that ArcLight Cinemas was prepared to honor its contract to show The Hateful Eight at the Cinerama Dome, but were told that if it didn’t break the contract and show Star Wars through the holiday season, the Disney would not allow Star Wars to play at any theater in the ArcLight chain. Disney’s response so far? Nothing. No denials, no defense, no comment at all. They’re Disney.

On abolitionist John Brown, his favorite historical figure:
“His idea was the minute white blood is shed the way black blood is shed, that’s when shit will start changing. And like all great Americans, he was hung for treason.” —L.A. Weekly, Dec. 16

Fallout: Any takers on this?