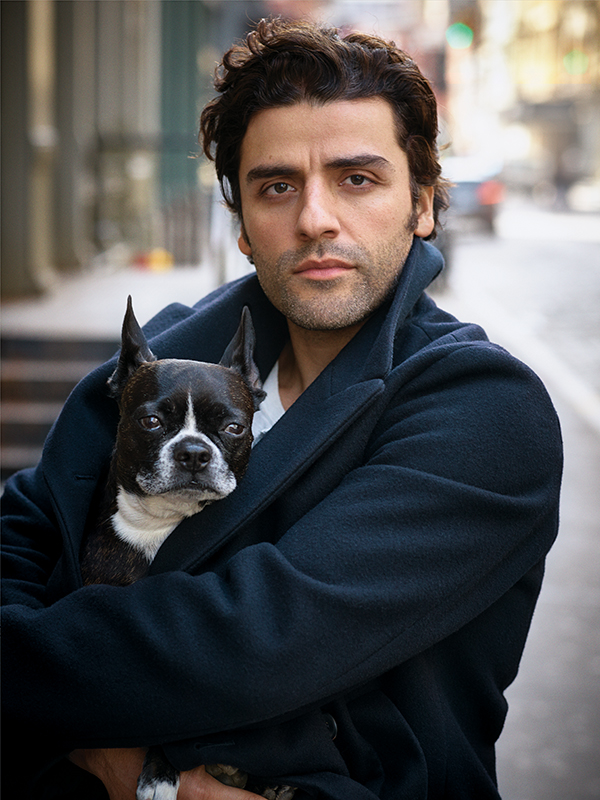 No actor had a better 2015 than Oscar Isaac. He found a hilariously unsettling take on an eccentric tech billionaire (with serious dance chops) in Ex Machina; embodied the real-life tragedy of a Yonkers politician in his Golden Globe-winning turn in David Simon’s Show Me a Hero; and spent quality time with BB-8 and Finn in Star Wars: The Force Awakens. Now, he’s the titular blue-skinned villain in X-Men: Apocalypse, which landed him on the cover of Rolling Stone, accompanied with his dog, Moby. Here’s more from interviews for his cover story.

Poe Dameron is the most straightforward part Isaac has ever played – and maybe the most difficult
“It’s extra-challenging when there’s less characterization involved,” he says. “I mean, there’s still quite a bit of character there  — he’s not me, even the way of talking is a bit different. But sometimes it’s hard when you have less to hold on to. Have you ever seen this movie called The Five Obstructions by Lars von Trier and Jørgen Leth? He has remake a film five different times, each with a different ‘obstruction,’ like it has to be animated. But the final obstruction was no obstruction at all, and that was the most difficult. That’s a little bit of how I felt. If I have every choice possible, then I don’t know what to do. I have no way of focusing it!”

To prepare for X-Men, he studied cults like the Source Family and re-read the Book of Revelation — and his musings about Apocalypse got pretty deep
“We were talking about, what if he’s the only person that actually has a soul? Out of all of us, he’s the only one that’s been able to separate his consciousness from his body, which is something that pretty much every religion aspires to. And maybe he would feel that he is the steward of humanity’s consciousness. So he’s been shaping us, but then he gets betrayed and he’s buried for a long time — and then wakes. The main idea is to imagine that God has been asleep, and He wakes up tomorrow and he’s like, ‘No, this wasn’t supposed to be it.’ And he’s pissed.”

Isaac spent most of a recent week off from the next Star Wars playing video games
“I played a lot of Street Fighter on PS4. I’m really good, man. It just came out, this brand new Street Fighter 5. And I was playing The Witness  – figuring out them puzzles.”

He has no interest in getting super-jacked for a role
“I had to get kind of big for Ex Machina,” he says. “But you know, this whole new thing where dudes just get fucking bulked out — I think I’ve passed that point. Maybe in my 20s or early 30s I would’ve found that appealing. I got really slim for Apocalypse. I was on a very intense regimen then. But everyone’s starting to look the same. I get the aesthetic, though: If you look at the drawings in comic books and video games and all that, there is a mythological element to those characters, so part of that is the body and seeing all the sculpted muscles and stuff.”

He didn’t know he would be wearing a giant suit and make-up when he signed on to play Apocalypse
“I would’ve thought it would’ve been an animated character or some sort of CGI thing,” he says. “It’s a crazy gamble. When [X-Men director Bryan Singer] was like, ‘I want to do it as practical as possible,’ I thought, OK, that’s a really interesting challenge.”

Playing a comic-book villain ended up reminding him of acting school
“In some ways, it felt like being back at Juilliard,” he says. “We would do mask work and crazy weird stuff. What I did as Apocalypse could be a massive failure — whether it comes across or not, that’s out of my control. But it was fun to do something that wasn’t naturalistic at all. I knew I couldn’t move too much, so I was actually watching some kabuki theater and different things and seeing how they did it. You do a big motion that conveys something and then you move your head to get attention to the face, and then you express an emotion. It was fun to get the opportunity to do something so trippy and psychedelic.”

Isaac, who played in bands before his acting career took off and still writes songs, wouldn’t mind putting out an album someday
“Maybe at some point,” he says. “I love being in the studio. I’ve got so many songs. I don’t have any career aspirations with it. I think it would be fun to put a really great-sounding thing together and vibe out. Sometimes I wish I could do a little more music. It’s funny though, occasionally I’ll get a chunk of time and then the inspiration just doesn’t come. You can’t really force that.”

Isaac and Michael Fassbender experimented with a unique hangover remedy on the X-Men: Apocalypse set
“We had a dinner and had one too many glasses of wine,” says Fassbender, “and discussed what we were going to do with a scene. And then Oscar had to come in a couple hours earlier than me. We had oysters that morning. It was a great cure for a hangover. So, people who need a pickup after a heavy night — oysters do the trick!”

X-Men director Bryan Singer got Apocalypse’s rumbling vocal sound by recording Isaac during ADR as if he were a drum kit or a bass guitar
“I did something that hasn’t really been done before,” says Singer. “I put a bass mic on his right cheek and a bass drum mic on his left cheek, to pull range of voice that the human ear can’t hear. I could use those sounds, his voice, his performance, but parts that a human ear could never detect — and then amplify those and use them to create a unique voice for a character. I went through line by line and, based on his performance, was able to re-craft  the villain through sound.”

Isaac ended up favoring acting over music because he felt he had more to contribute with the former
“I wanted to have something to express that’s unique and is worth being paid attention to,” he says. “And I knew that if I was given the opportunity, I could add something. With the music thing, at a certain point, I thought, I don’t know if there’s anything I can add. I was playing genres, and I could make songs that are in these genres. But with acting, I continue to feel like maybe there is something, and I’m still searching for it. And there’s also the opposite of that — you also have to acknowledge the chance you don’t have it. And that’s a real fear. That’s one of the things that keeps the engine going. What else is there? Do you have more?”

After his career-transforming performance in Inside Llewyn Davis, he’s still close with the Coen brothers
“We’re good friends,” he says. “That was more than making a movie. That was a transition. That was a major shift. And those guys are two of the most inspiring people I’ve ever met. Not only from acting in their film, but from conversations we had. Talking about artists that they like and seeing theater with them, talking about movies, talking about music. They’re American folk artists and they are amazing. Their level of knowledge and their aesthetic is so refined and so beautiful and unique. For me, they’re the pinnacle.”