10 Things We Learned From 'Keith Richards: Under the Influence' - Rolling Stone
×

When it comes to rock and roll fantasies, most of us would surely put “hanging with Keith Richards’ near the top of our list. Really, who wouldn’t want to spend some quality time with the legendary Rolling Stones guitarist, spinning records, playing Fender Telecasters (preferably named after Dickens’ characters) and having the old pirate regale you with tales of over a half-century’s worth of musical adventures?

Director Morgan Neville (20 Feet From Stardom, Best of Enemies) got to do just that while making Keith Richards: Under The Influence, which premieres September 18th on Netflix — and which, for eighty extremely enjoyable minutes, allows us to do the same. Originally conceived as a promotional video for Crosseyed Heart, Richards’ first solo album in 23 years, Influence has been expanded into a feature-length documentary that paints a charming portrait of the guitarist (who will turn 72 in December) as rock and roll elder statesman. Tom Waits, Buddy Guy, Steve Jordan (who produced and drummed on Crosseyed Heart), X-Pensive Winos guitarist Waddy Wachtel and Richards’ long-serving guitar tech Pierre de Beauport all provide snippets of insightful commentary. But it’s really the Uncle Keef Show all the way, with Richards punctuating nearly every anecdote and guitar strum with a knowing grin, a phlegmy chuckle and/or the rakish twirl of a gnarled finger.

More of a snapshot of the man in his current, exceedingly positive headspace than a chronological trawl through the ups and downs of Richards’ back pages, the documetary assiduously avoids the darker side of the Keith/Stones legend — there’s no talk of Altamont, heroin, the death of Brian Jones or Richards’ tumultuous relationship with Anita Pallenberg, for example. The “influence” of the title refers to music rather than bourbon or opiates, and Neville does a beautiful job of getting to the heart of how blues, country and reggae sounds deeply impacted Richards and the Stones, as well as the immense joy that the guitarist still clearly derives from making music. Here are 10 things we learned from Keith Richards: Under the Influence.

1. Keith’s main early musical influence was his mother.
“My Mum was a beautiful music freak with incredible taste,” he says. “She was a wizard of the dial — if there was anything worth listening to [on the radio], she would find it.” Doris Richards turned her only son on to such jazz greats as Sarah Vaughn, Ella Fitzgerald, Billie Holiday, Louis Armstrong and Billy Eckstine, as well as “a little dash of Mozart here and there.” She also instilled him with a lifelong love of country music. “We didn’t hear a lot of it in England, but I was well aware of it,” he recalls. “My mother made sure of that.”

2. His grandfather “teased” him into becoming a guitarist.
Keith’s granddad Gus kept an acoustic guitar on his wall, which was placed tantalizingly out of the youngster’s reach. “When you can reach it, I’ll let you play it,” Gus told him; then, when Keith was big enough to reach it, Gus insisted that he learn the Spanish standard “Malagueña,” because “it’s got a lot of moves in it that make it great for the fingers.”

3. The roots of the Rolling Stones can be traced back to two specific albums.
In 1960, Keith and childhood chum Mick Jagger reunited when they ran into each other on a train. Mick was carrying two albums with him at the time — The Best of Muddy Waters and Chuck Berry’s Rockin’ at the Hops, both on Chess Records — and the two college students immediately bonded over their mutual love for the blues. “I thought I was the only guy in the southeast of England that knew anything about this stuff,” Keith laughs. Out of that bond grew the Rolling Stones, who took their name from a song on the Muddy LP called “Rollin’ Stone”; songs from both albums (including Muddy’s “I Just Want to Make Love to You” and Chuck’s “Let It Rock”) would show up in the band’s set lists for decades to come.

4. The Stones once got in trouble with the law for “topless bathing.”
Keith recounts how, during one of their early U.S. tours, someone called the cops on the band for swimming at a Georgia Holiday Inn without their shirts on. “Some freaked-out locals thought, because of the hair, there was a load of chicks jumping into the pool naked,” he chuckles. Much to the bemusement (and disappointment) of the local constabulary, it just turned out to be a bunch of skinny English dudes.

5. The Stones made it acceptable for Chicago blues guitarists to crank up their amps in the recording studio.
Blues legend Buddy Guy recalls how the Chess Studios engineers refused to record his guitar at a loud volume, claiming that no one would want to hear the distorted sounds that resulted. “But when it got back to Leonard [Chess] that the British are playing it, and it’s getting over,” he says, “I turned my amp up like these British guys.” 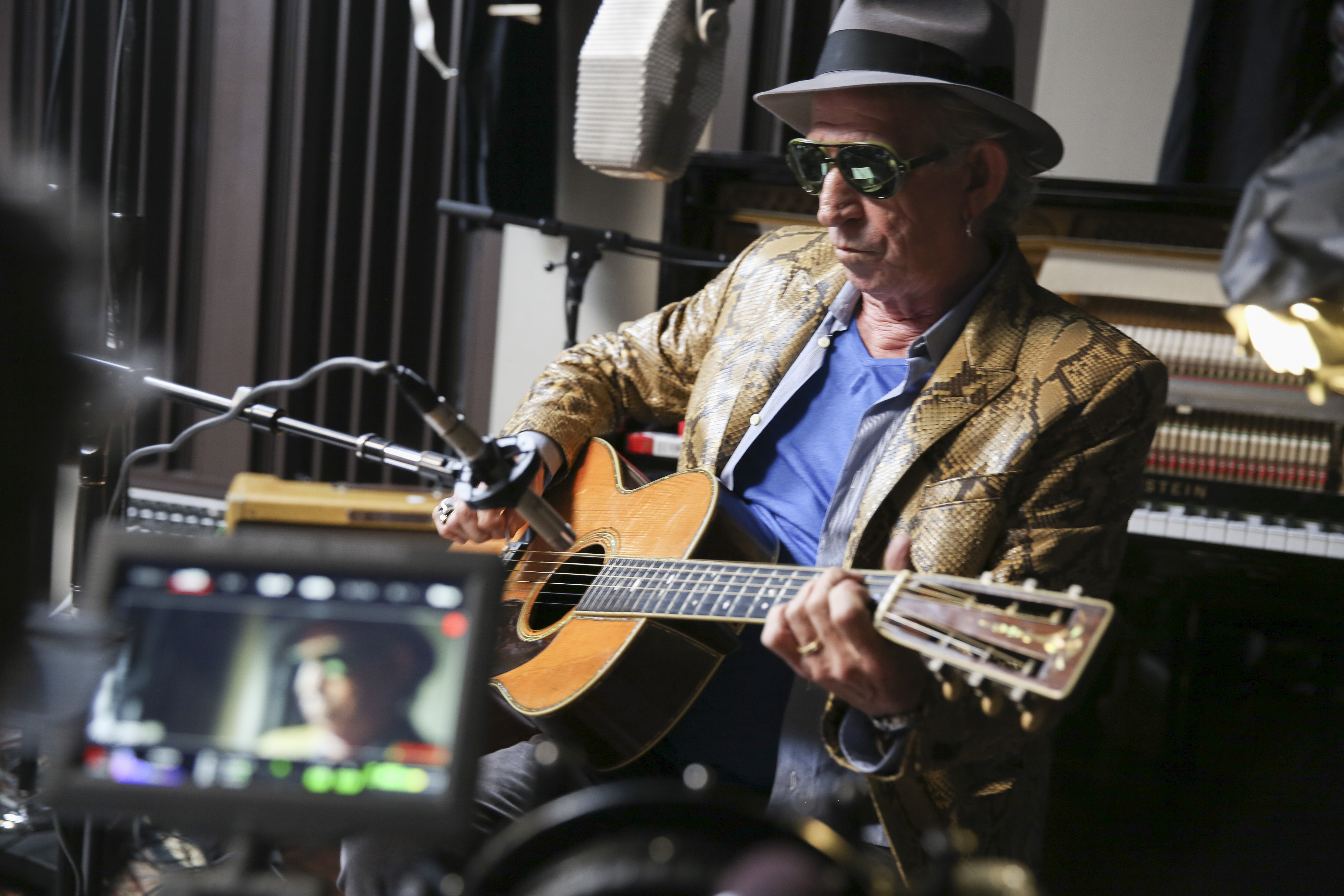 6. Keith thinks he’s probably a better bass player than a guitar player.
Well, he might actually be joking about that — but there’s no question that Keith loves the occasional four-string workout. Not only did he lay down the bass tracks on such classic Stones jams as “Jumping Jack Flash,” “Street Fighting Man,” “Sympathy for the Devil” and “Happy,” but he also handles all the bass duties on Crosseyed Heart. “I love this shit!” he exults, after finishing a bass take for the new record.

7. There are no electric guitars on “Street Fighting Man.”
Seriously — Keith’s bass is actually the only electric instrument on the entire song. That aggressive guitar sound you hear on the 1968 track is actually Keith slamming an acoustic guitar at close range into the microphone of a portable tape recorder; the volume and proximity of the guitar caused the recorded signal to overload, producing a distorted, ringing sound. In Under the Influence, Keith demonstrates the technique using a 1967 Norelco tape recorder — a sequence that will probably cause the eBay value of 1960s portable tape decks to inflate considerably.

8. Keith once went to a party at one blues legend’s house — and somehow woke up at the home of another one.
While paying a visit with Neville to Muddy’s decrepit old digs on the south side of Chicago, Keith recalls Willie Dixon taking him to a house party there many years ago. “It was rocking when I got here, I remember that,” he says. “It’s leaving I don’t remember. I crashed out here, but I woke up at Howlin’ Wolf’s house… the party continued, and I went with it!”

9. Keith was estranged from his father for two decades.
Keith’s parents split up after he left home to pursue his rock and roll dreams; Bert Richards, his father, didn’t speak to him for 20 years. When Keith finally arranged a meeting with Bert during the 1980s, he was so nervous about the prospect of seeing his dad again that he “took Ronnie Wood with me for protection — that’s how scared I was!” Woody’s intimidating presence ultimately proved unnecessary, however, as the reunion turned out to be a happy one. “We sorted it all out,” Keith says, “and for the next 20 years, he became my best mate.”

10. Keith has actually [gasp] talked about retiring.
The Internet may be crammed with jokey memes about Keith’s immortality, but the man himself appears to have semi-seriously considered the prospect of calling it a day, at least career-wise. “Keith said something that was kind of shocking, and I asked him never to say that again,” recounts Steve Jordan. “He was like, ‘You know, maybe I should retire.’ At which I completely freaked out!” Keith tries to play it off by growling, “I was talking in my sleep!” — but hey, it’s somehow comforting to learn that a seventy-something rock star occasionally thinks about the same things that normal seventysomethings do.