“I don’t know if this is going to work.”

Barely five weeks have passed since Star Wars: The Force Awakens became the highest-grossing film in domestic box office history — which hasn’t stopped J.J. Abrams from being so excited about his next project that he impulsively snagged a coach ticket on a L.A.-to-New York red-eye flight just to talk about it. You can almost hear the butterflies swarming in his stomach as Hollywood’s greatest hype man pinballs around his suite at the Crosby Street Hotel (“Would you like anything to drink? Where do you want to sit? How’s your day going?”) like a rookie magician anxious to see if he pulled off his latest trick.

For Abrams’ first proper foray into the movie landscape, he made an elephant appear from thin air in the middle of a crowded theater. It was the summer of 2007, and as multiplex audiences eagerly waited for their Transformers screenings to start. Suddenly, without warning, they were treated to a trailer for a movie without a title — a mysterious clip in which a Manhattan rooftop party was interrupted by a monstrous roar, courtesy of something large enough to decapitate the Statue of Liberty. Film fans, electrified at having the wool pulled over their eyes, wer teased into a frenzy of anticipation. The result, eventually titled Cloverfield, earned $170.8 million against a $25 million budget when it debuted in January of 2008.

Why 'Star Wars' Trailer May Be J.J. Abrams' Real Masterpiece

Why 'The Force Awakens' Is the 'Star Wars' Movie We Needed

Abrams, who soon became accustomed to navigating far more rabid fan bases, found himself caught off-guard by the residual enthusiasm for his company’s fluke blockbuster. “I was surprised every time that people asked me about a sequel,” he admits. “I’ve always thought it’s so cool that people cared enough about that movie to want more of it. I knew there was something out there that could justify a continuation … just maybe not in the way that people expect.”

And what’s the only thing more unexpected than dropping an out-of-nowhere trailer for a science-fiction blockbuster no one knew existed? Repeating the trick for an audience that already knows where to look. On January 14th, 2016, Abrams once again attached a Cloverfield trailer to a Michael Bay movie — in this case, 13 Hours: The Secret Soldiers of Benghazi. But this time, the title was the star of the show.

The brilliantly cut (and deceptively upbeat) teaser shows life in some sort of underground bunker, as a girl with a brace on her leg (Mary Elizabeth Winstead), a boy with a broken arm (John Gallagher Jr.) and a man with a gun strapped to his back (John Goodman) try to kill the time. As Tommy James and the Shondells’ “I Think We’re Alone Now” plays over a jukebox, it soon becomes clear that something sinister is happening. The footage builds to what appears to be an escape attempt as Goodman barks: “Don’t open that door — you’re going to get us all killed!” And then, even more ominously: “Something’s coming.” That’s when the word “Cloverfield” flickers on the screen, a few seconds before the title appears in full: “10 Cloverfield Lane.”

It was a true “holy shit” moment in a culture that thrives on spoilers and leaks, but the real dagger was what came next: “March 11th. In theaters and IMAX.” When the trailer began, audiences were completely oblivious to the existence of a second Cloverfield film; when the trailer ended, they were roughly eight weeks away from opening night. At the same time that Abrams was shepherding Star Wars into theaters and orchestrating the most scrutinized marketing campaign in the history of modern entertainment, he was also secretly plotting a genuine Beyoncé moment. 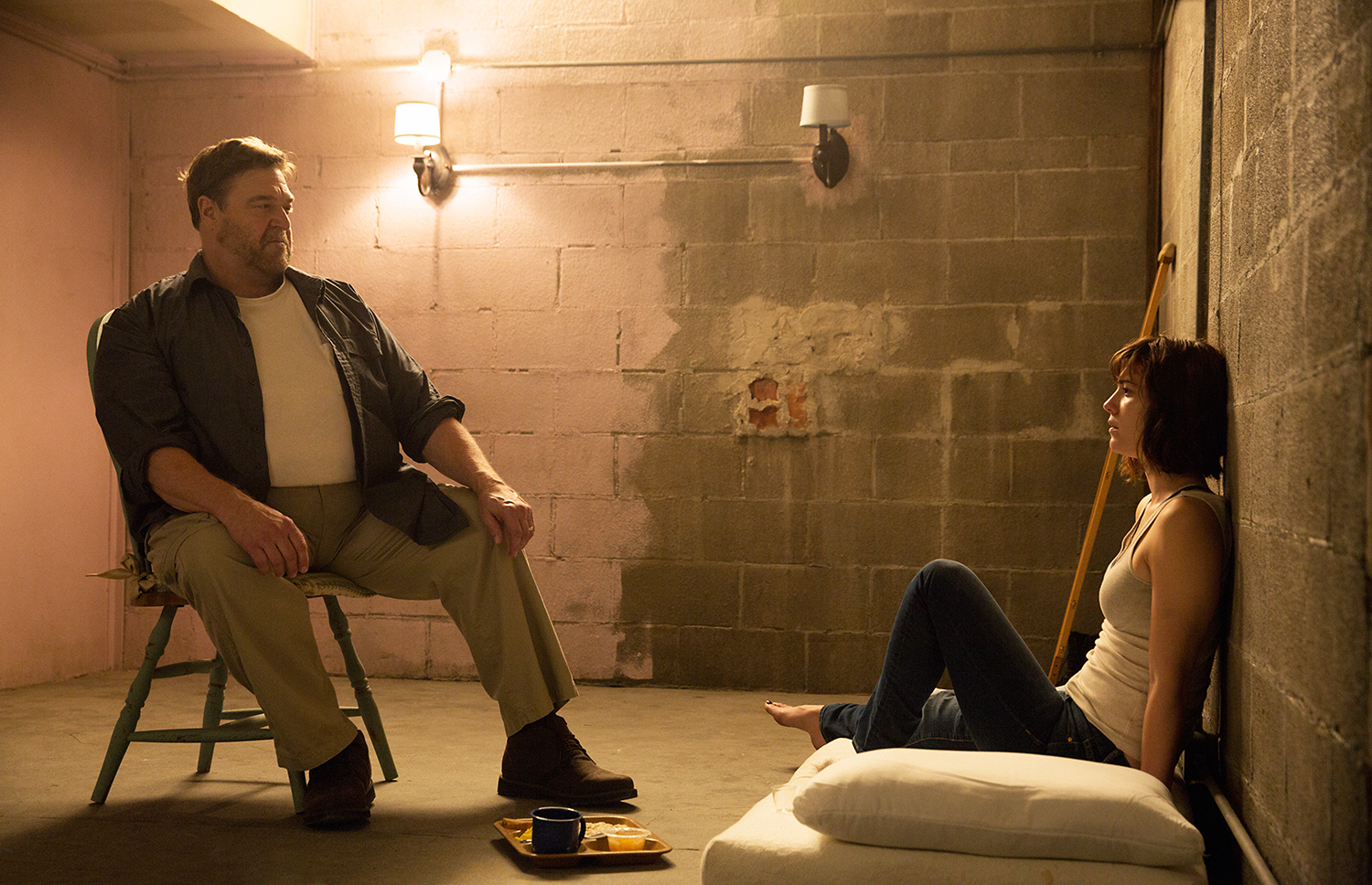 “I get that there’s a template for doing things in this business,” Abrams explains, “but Netflix has shown us that there are other ways of doing things, too.” In a world where studios have begun holding press conferences to announce release dates for franchise films nearly five years in advance, the idea of revealing a major new release with less than two months notice is nothing short of a game-changer.

The unique nature of 10 Cloverfield Lane was always going to encourage a different kind of release strategy. The saga began a few years back, when the company picked up a spec script called “The Cellar.” And then, like a tell-tale heart buried under the papers on his desk, the screenplay began to speak to Abrams. “It’s a wholly original story with different characters, different monsters, different everything,” he says. “But — and this is such a strange thing to say — every time we would talk about that script it would feel like the same color as Cloverfield. It was this vibe I had.”

It was also an extremely savvy marketing idea. In 2008, “Cloverfield” was a nonsense word, a working title that was meant to be replaced before release — in 2016, it’s what passes for a brand. At a time when studios think original science-fiction is tantamount to suicide (remember Tomorrowland? How about Jupiter Ascending?), any sort of name recognition goes a long way. Cue the light bulb moment: If a movie shot for approximately $5 million was giftwrapped to audiences in the guise of a major event, couldn’t it legitimately become one? If a franchise could be a cash cow, couldn’t it also be a Trojan horse?

Hiring Whiplash wunderkind Damien Chazelle to nudge the script in a slightly new direction, Abrams began to hatch a coup. “It felt to me like if we’re able to authentically connect this movie to this other thing that has been a curious source of interest from a lot of people,” the producer ventures, “it might give [the] movie the kind of attention that it deserves — and do so by making public this thing that we were feeling privately, which was ‘Oh my God, this literally feels like the sister movie to Cloverfield.'” Not a sequel, Abrams repeatedly stresses, but something of a younger sibling. “The DNA is from the same place, but these are absolutely individual people.”

According to director Dan Trachtenberg, whom Abrams hired on the strength of his Portal fan film, the release strategy evolved organically. “It wasn’t like we sat down a year before the movie came out and said ‘We’re going to put out a trailer eight weeks before the release date.’ It just sort of became that.” And while Trachtenberg was naturally involved in the master plan, he was still knocked sideways by its execution: “I only realized after the fact that J.J. and the marketing team had come up with the idea of putting the trailer on the Michael Bay movie for a six-hour period before releasing it online — that was genius. It’s amazing how long six hours can be.” 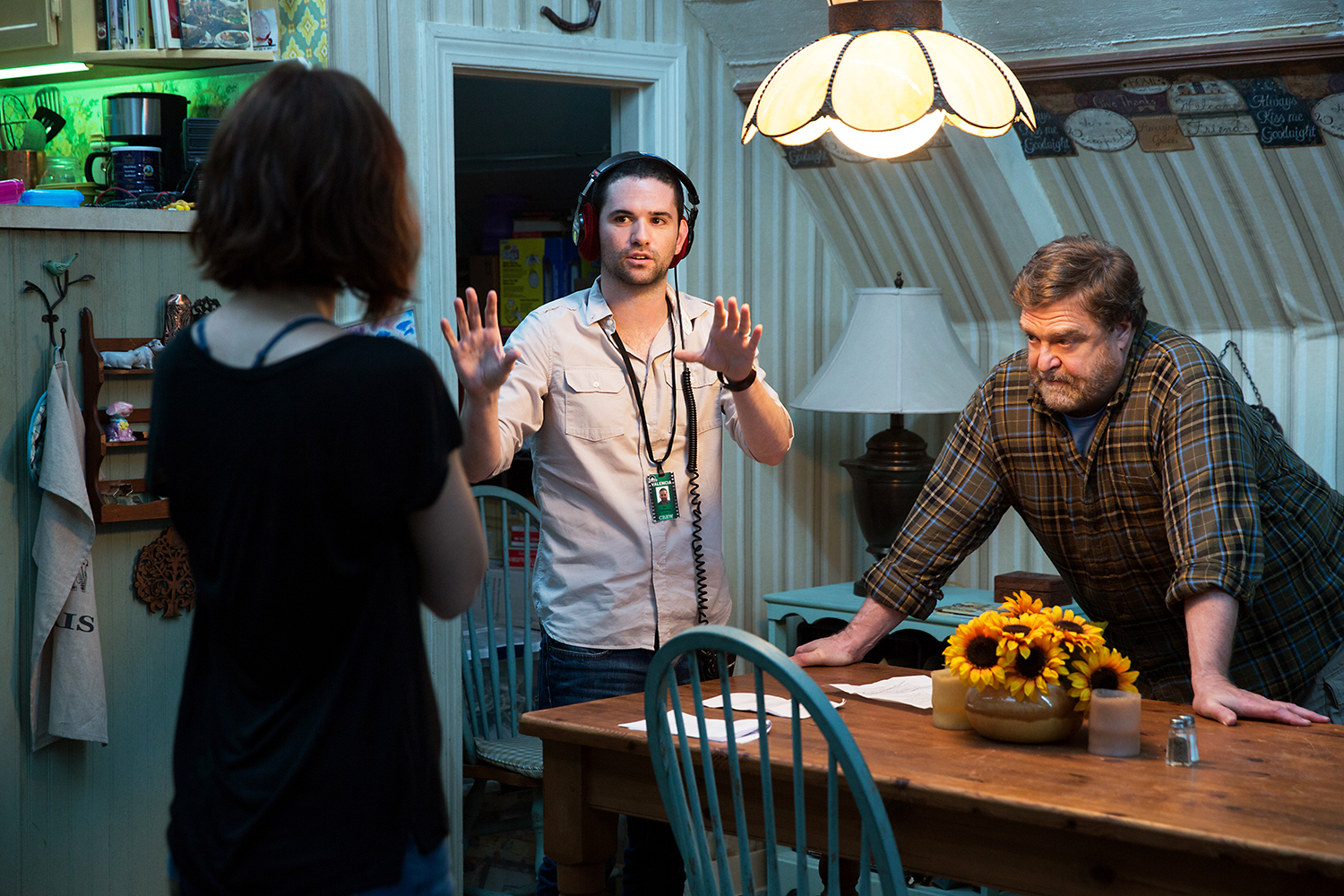 Abrams’ production company Bad Robot has a history of secrecy, but 10 Cloverfield Lane is the first project that was played so close to the vest that not even its cast knew the full scope of it. By January of this year, Winstead had begun to assume the worst. “There were moments when I was worried. I mean, I’m unaccustomed to not hearing about a movie.” And then she got a call from Trachtenberg, who had some interesting news to share: She was going to play the lead role in a major franchise film — in fact, she already had. And the cat was about to claw its way out of the bag. “Dan called me literally an hour before the trailer came out and told me the title of the movie,” Winstead remembers. “My first reaction was ‘… OK. That’s interesting. I’m not quite sure how to feel about it, but that’s interesting.” And then I started checking Twitter around the time that the trailer dropped and I was like: ‘Oh!'”

Her costar had been similarly kept in the dark. “There were always a couple of titles that were floating around on set,” Gallagher, Jr says. “Some people were calling it The Cellar, others were calling it Valencia, but I never gave it too much thought. Because as an actor I’m always like, ‘Who knows what’s going to happen after we shoot this thing?'”

Even from his seat in the sidecar, Trachtenberg was shocked by how his secret movie was unveiled to the world. “The Beyoncé element of it didn’t really occur to me before it happened — I thought it would be cool, but not quite this cool. But as soon as it went live it was like, ‘Right, this is what it felt like when I was a kid and I used to go to the movies and I’d run up the escalator because I just couldn’t wait. That’s a special feeling, and I don’t get it very much anymore.” 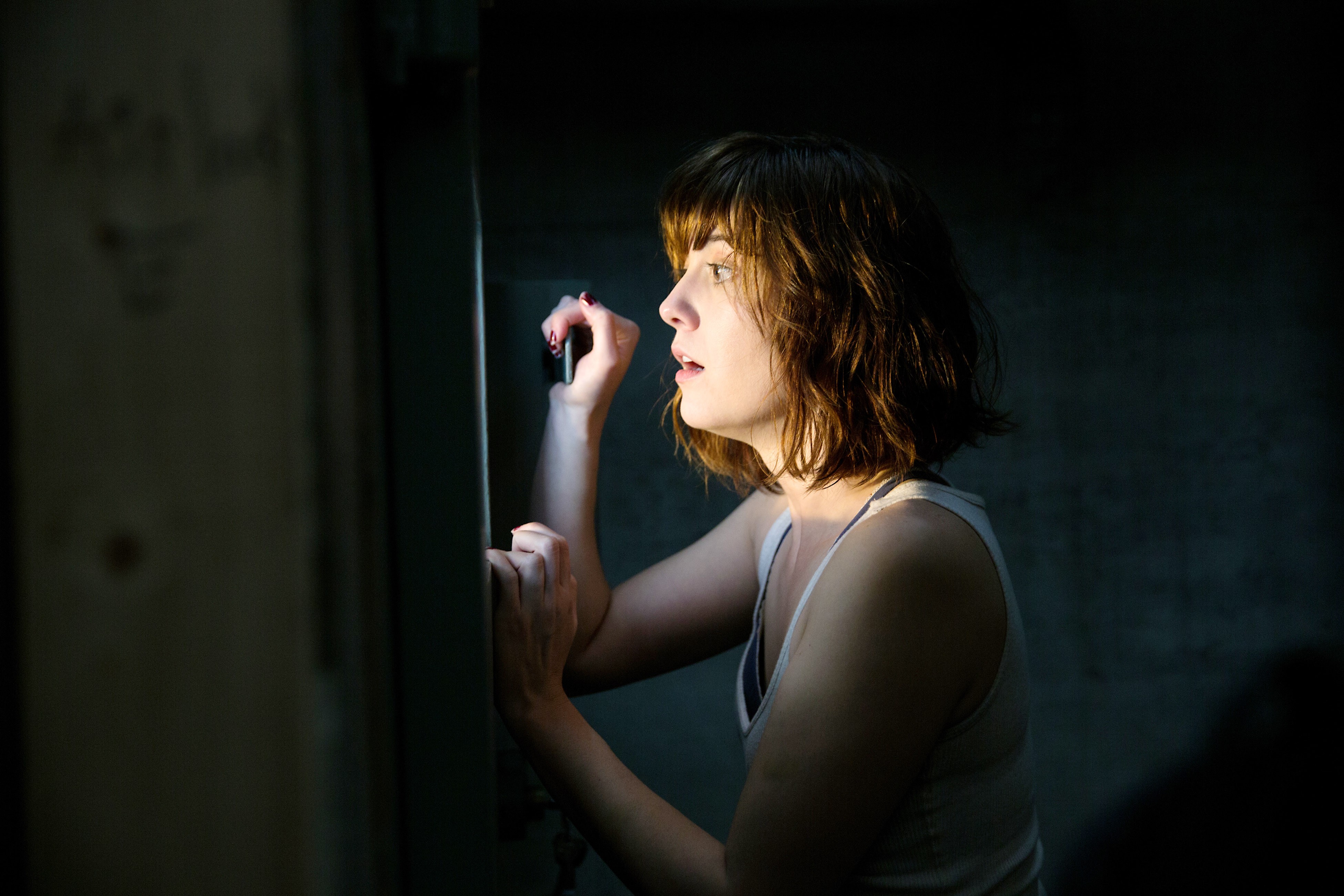 Nobody does. If the music industry is a shark, the film business is a giant cruise ship with a broken rudder — it focuses on what’s coming five years down the line because it takes that long to turn. But Abrams has repeatedly illustrated a knack for reading the tides. He possesses a rare understanding of the idea that marketing is an act of storytelling unto itself. “When you have more than a year of promotion and publicity, you don’t know if you’re going to miss the wave — you don’t know if it’s going to crest way before you’re ready to release the movie.” Abrams hunches forward. “We were certainly nervous about that on Star Wars. But when we released the trailer for 10 Cloverfield Lane, people weren’t most excited that it was coming at all, but rather that it was coming so soon.”

On the other hand, the communal element that makes the cinema special is the same force that prevents it from being as dynamic as other mediums have become. When asked if he considered safeguarding 10 Cloverfield Lane‘s existence until the week it hit theaters, Abrams replies: “My guess is that if you announced a big movie three days before release you might risk an ‘Oh, it was out?’ thing, because you’re asking people to go to a location to give money to someone to go into a building to view something.” Still, the technology makes it possible: “Anything is capable of following the Beyoncé model now that information is instantly disseminated,” he insists, citing Louis C.K.’s Horace and Pete web series with great admiration.

But the transparency around which C.K. has built his brand is anathema to the mystery box mentality at the core of Abrams’ approach. The fact is, there’s a very real chance that moviegoers will buy tickets expecting to see a clear continuation of the Cloverfield universe, only to potentially feel ripped off. “It’s a tricky thing, and I don’t know if this is going to work,” Abrams says again. But he’s flown all the way here because he believes in this movie; he believes that we’re better off surfing the wave instead of just letting it pull us along. “I think that the movie is scary enough, is entertaining enough, is fun enough that it actually deserves to work — and if it doesn’t it won’t be because we didn’t try something interesting. If it works, it might give people ideas to do more things like it.”