Joaquin Phoenix is smiling. “Was that an earthquake?!” he asks excitedly. At first, it’s imperceptible, but he’s right: He and director Lynne Ramsay are sitting in a Los Angeles office discussing their titanic thriller, You Were Never Really Here, when, suddenly, the ground begins shaking. It’s just a mild temblor, but enough of a jolt that Phoenix announces, “That was pretty good!” before checking to make sure people in the next room are OK. In comparison to her animated star, the Scottish filmmaker takes a beat to absorb what’s happened and then returns to answering the question she’d been asked – something about the theme of violence in her movies. “The world makes me super-concerned at the moment,” she admits once the shaking subsides. “There’s crazy shit going on. I think I question violence, where it comes from . . . and where it’s going.”

That brief but intense quake is about as nice a metaphor as you’re likely to get regarding the seismic cinematic event – shot at breakneck speed to accommodate Phoenix’s packed schedule and a Cannes premiere date – these two artists have created. You Were Never Really Here is not just a riff on revenge stories and troubled men; it’s a product of the improvisational, intuitive approach that these first-time collaborators adopted to craft a violent story about a former soldier hired to rescue runaway girls. To hear Ramsay and Phoenix tell it, making the movie was a mad sprint filled with 11th-hour inspiration and delirious dead ends. Nothing about the project was planned or proper. No wonder a random earthquake doesn’t throw them.

The film, which won Best Actor and Best Screenplay at Cannes, began in relative tranquility. The Glasgow-born Ramsay, fresh off the success of her 2011 Tilda Swinton drama, We Need to Talk About Kevin, was presented with a Jonathan Ames novella about a mournful avenger who navigates a world of crooked New York politicians and underage sex rings. The man, named Joe, is given a mission: Rescue a senator’s daughter from the off-the-books brothel she’s trapped in. Along the way, he’s forced to confront double-crosses and his own disintegrating psyche. The rights hadn’t yet been secured, but Ramsay decided to write a screenplay anyway, retiring to a small, secluded Greek island to work.

“It started off a little bit like, ‘I’ve never done anything like this before, so let’s see how it goes,'” she recalls. “But, yeah, it was terrifying, because I could have been screwed [if the rights fell through].” 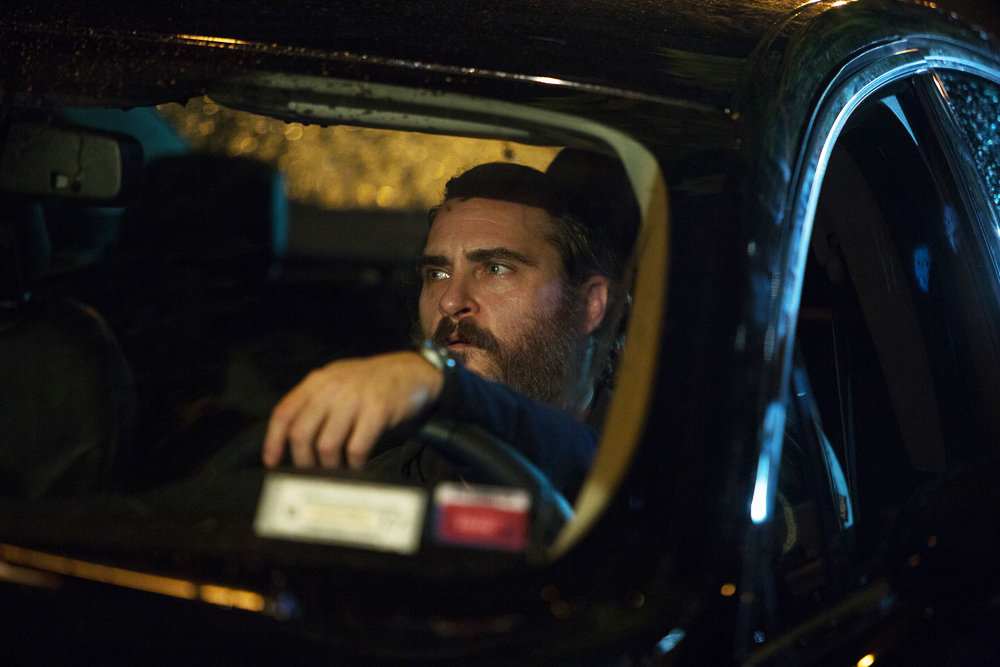 Still, excited to draw on her love of noir, Ramsay kept writing – and she knew who should play the sullen but soulful antihero. She had long been a fan of Phoenix’s work; he, in turn, was equally excited about working with her on something. It was just a matter of whether the timing would work out, since he had several films on his plate – most pressingly Mary Magdalene, where he’d portray Jesus opposite Rooney Mara. As Phoenix remembers, in the spring of 2016, “I was like, ‘Can you shoot this in eight weeks?'” – an insanely quick timetable considering the director hadn’t even started location scouting yet. “And she said, ‘Yep.’ I was like, ‘How the fuck could she say yes?’ I was certain she was going to say no, and I could be, ‘Oh, well, at least I tried.'”

It was an early indication that You Were Never Really Here wouldn’t be business as usual. From the opening frames, the film announces itself as a repudiation of the story’s pulp roots. Forget about traditional action sequences or a convoluted backstory designed to “explain” Joe’s motivations; instead, Ramsay introduces brief, nearly subliminal flashbacks of his past and provides only slivers of incidents, mostly highlighting the aftereffects of the man’s savage line of work. Even Phoenix’s bulky, bearded physique is far removed from our image of a slick, wiry mercenary.

“At the beginning, it was a lot of figuring it out,” Ramsay confesses when discussing Joe’s unkempt look. “[Though] I knew he’d have a beard because Joaquin was gonna play Jesus.” But the beefier Phoenix appealed to her desire to shake up genre expectations, wanting to move away from “the straightforward six-pack guy, the 2D action-hero type of guy.” And by conceiving Joe with oversize facial hair and a gut, the actor perhaps was signaling his own mixed emotions about this stoic, standoffish character whose only friend seems to be his aged mother.

“To be perfectly frank, I don’t know that I really did like the character that much, initially,” Phoenix says. As is his style in interviews, the actor will often pause, trying to articulate motivations that always seem just out of reach of his understanding. “There were a lot of traits about the character that were really subtle that took me a while to pick up on,” he finally offers. “Or maybe it’s something that we invented after I got involved, I don’t know.”

The shortened preproduction window was unusual for Ramsay, who first gained international acclaim with her gritty coming-of-age drama Ratcatcher (1999) and her woozy, expressionistic character study Morvern Callar (2002). Then came Kevin, and after riding high on the film’s reception, she was slated to direct her most ambitious work: the revisionist Western Jane Got a Gun, starring Natalie Portman. Creative differences prompted her to walk away right before production, and while Ramsay says she didn’t immediately return to You Were Never Really Here after that project fizzled, she acknowledges that the time spent on the Western may have helped get her ready for her action-packed vigilante thriller.

“When you prep something, there’s a lot of experience you get from that,” she says. “I’d never shot an action sequence – [but] I prepped some.” Noting that she knows filmmakers who have prepared to shoot a project only for it to fall apart, Ramsay finally says, “The bad things teach you more – I know it’s a cliché, but it’s true.”

What really bonded the director and actor, however, was hashing out what they wouldn’t allow in the film. “It was a brutal rehearsal period,” says Phoenix. “[We had] this really strong script and this great foundation and this clear trajectory and a really well-written character – and there was something in that, I think, that instinctually repelled us.” Both of them laugh, looking at each other fondly. “Every time we went through the script, all those things that worked made us uneasy,” Phoenix adds. “And we were like, ‘How can we make this not work? How can we create a scenario that makes us find other things that we hadn’t anticipated?’ That became what was so exciting: ‘Who knows if this is going to be any good?’

“It was a constant willingness to fail,” he continues. “We would say, ‘Well, we know that we can’t do that – we can’t do these things that we’ve seen before that feel familiar to us. OK, that takes that off the table. . . .'” 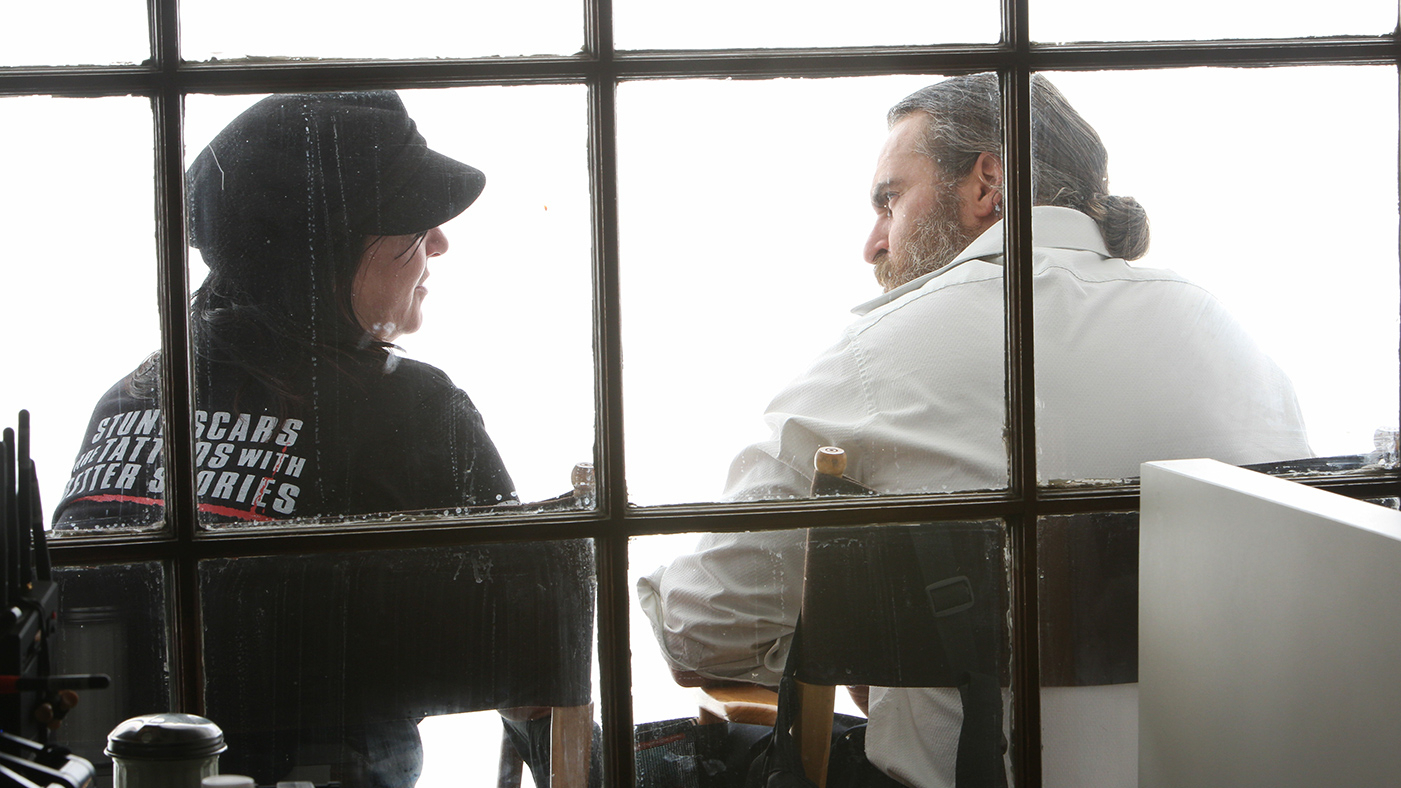 The freedom to dream up a new kind of vigilante movie – abandoning dozens of script pages along the way – energized them to the point that they felt a letdown when production ended. “When we got to the end of the shoot, I was sad,” Ramsay says. “I was like, ‘Let’s make another movie!'”

But the rush wasn’t over for the director, who was asked to speed through editing in order to deliver the film in time for Cannes’ Official Competition. That was a risk – a movie’s commercial and critical prospects can be obliterated after a poor reception on the Croisette – and Ramsay admits to some initial reluctance, which she blew by to complete the edit. “I felt confident in the cut,” she says. “I didn’t [worry] about Cannes. I was too tired.”

The version that’s hitting theaters on April 6th is slightly shorter and fine-tuned since its festival premiere – though if anything, it’s an even more intense, shattering experience. Not that Phoenix would know: Famously reluctant to watch his work, the Oscar-nominated actor prefers what happened on set to viewing the final product.

“If you do five or six takes, and they’re each different, to see it cut into one take . . . that’s never going to match the experience,” he explains, getting more and more animated. “We were in it together. I remember shooting at the mom’s house, we couldn’t get fucking space alone. Every single little room was taken up with equipment. We were in a closet trying to talk to each other and have a little bit of privacy. We’re just sweating and stanky and fuckin’ trying to talk!”

That sounds miserable. But Phoenix grins from ear to ear. “Nothing will match that experience,” he says. “It was exhilarating. I would rather remember that.”